Wednesday, August 3 2016 we picked up our one-way rental van, packed it to the ceiling with stuff and headed South to St. Petersburg, FL where Viridian was waiting at Embree Marine Boat Yard with fresh new fuel tanks and upgraded navigation electronics.  My brother Richard drove his car to Apalachicola FL were we swung by, stuffed him and his stuff in the van and proceeded to a hotel just North of St. Petersburg FL.  On Saturday, Richard and I boarded Viridian and sailed 3 miles North to St. Petersburg Municipal Marina while Meg drove the van to the marina and met us there.  We unloaded our gear, food, etc. and began making Viridian ready for her journey North to Huntsville, AL.

After shocking the fresh water system on the boat and stowing all the gear we hired a Captain to spend 24 hours with us to teach docking, anchoring and basic seamanship skills.  This was money well spent.  We felt much more confident in ourselves and our boat.  We also got a list of things that needed attention but could wait till we got to Mobile.

We finally got a weather window to leave the marina but my brother's annual leave was spent sitting in the rain so we planned a day trip to Clearwater, FL where he could rent a car and drive to Apalachicola get his car and go back to work.  We set sail on 11 August and intended to go to Clearwater via the ICW.  I charted a course that took us up a canal that had a bridge too low to pass under.  We backtracked out into Tampa Bay and decided to run off shore to Clearwater.  However, once in the Gulf we discussed going ahead and making the crossing.  The weather was great and we got independent confirmation from trusted sources so I set a heading of 330 degrees NNW for East Pass.  We watched Clearwater slide over the horizon as we headed North at 8 mph in Viridian.  The sun set on our port side and we settled in for a long trip.

The wave action was coming in on the port quarter bow making the ride kinda like riding a mechanical bull in slow motion.  We had to hold onto anything we could just to move around on deck but we managed with only a few minor issues.  We followed the GPS bearing all night using stars, clouds, the moon or anything we could fix a reference on to steer a steady course.  The sun rose in a blue sky with white fluffy clouds on the horizon.  East Bay finally rolled up over the horizon and we were able to get cell phone coverage and call our people to close out our cruise plan and announce we had arrived safely on schedule.  Turned West after clearing East Pass and sailed into the sun for 25 miles to our dock in Apalachicola Fl. 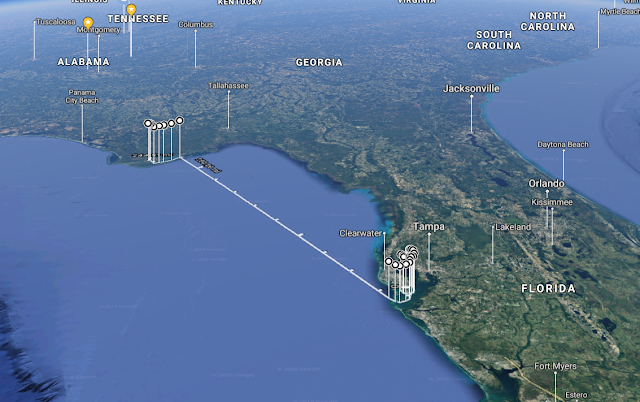 Approximately 230 miles over all that included the backtracking due to low bridge. 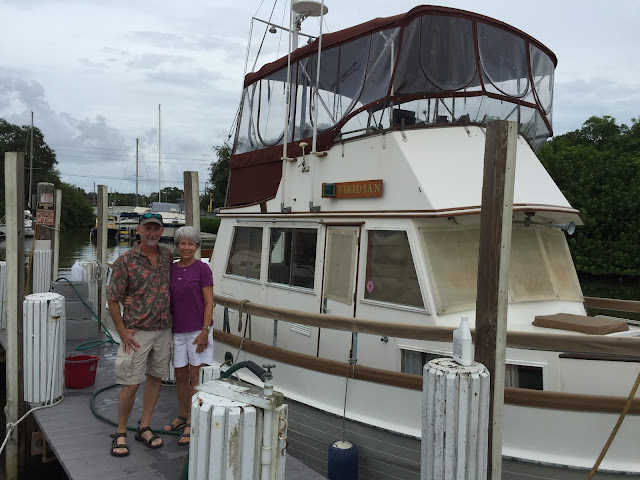 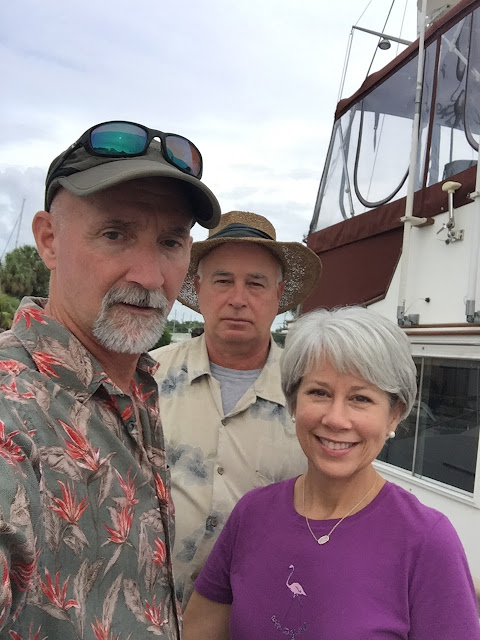 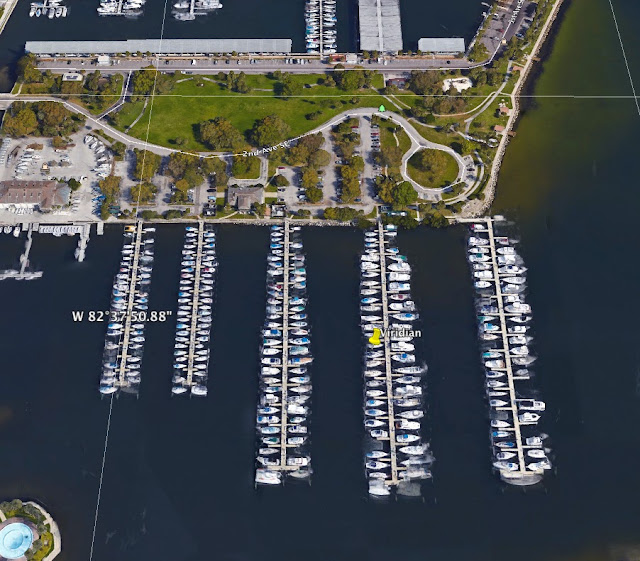 Our slip in St. Petersburg Marina 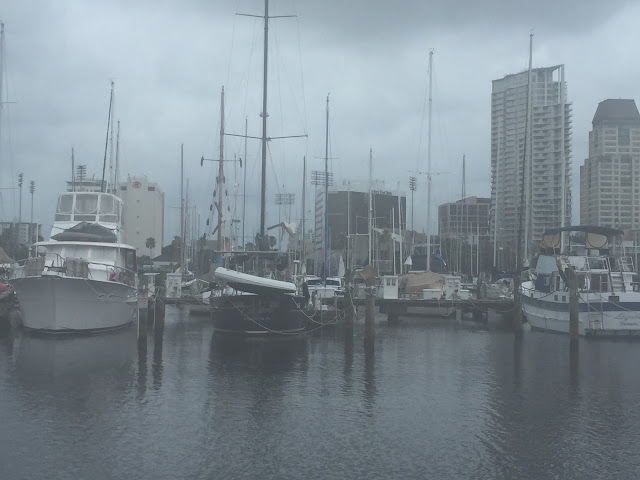 This was the weather most of our stay at St. Petersburg 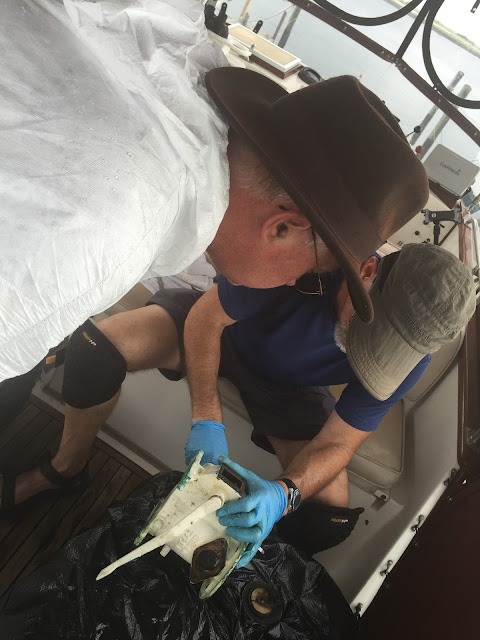 The Captain is expected to do the dirty work.  Rebuilding the toilet in the master head. 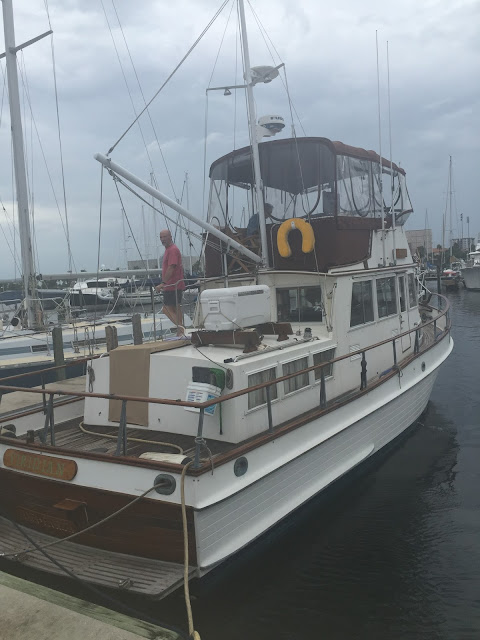 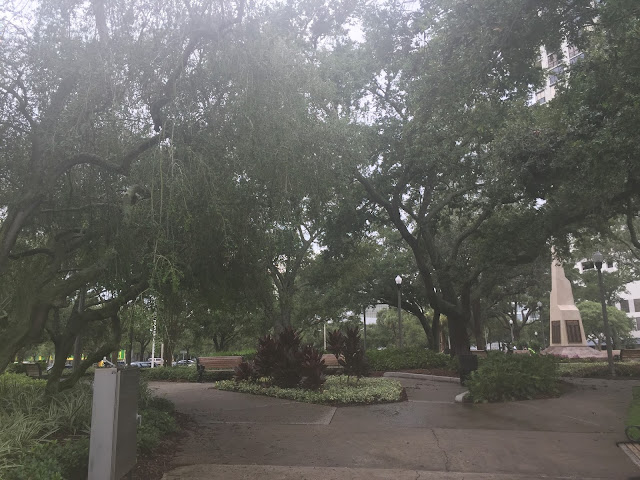 The park next to the Marina 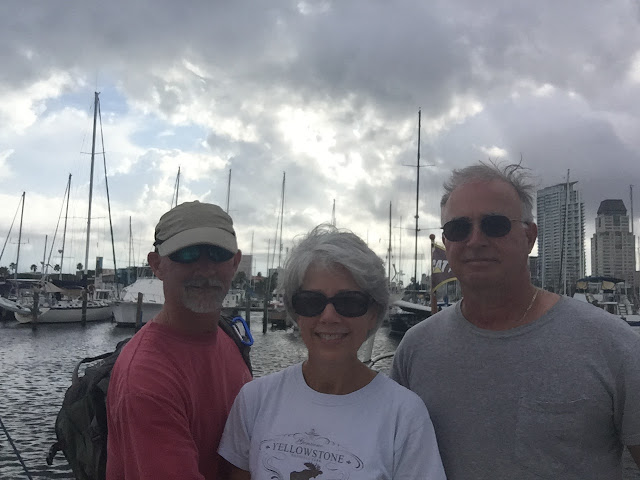 Is that blue sky we see? 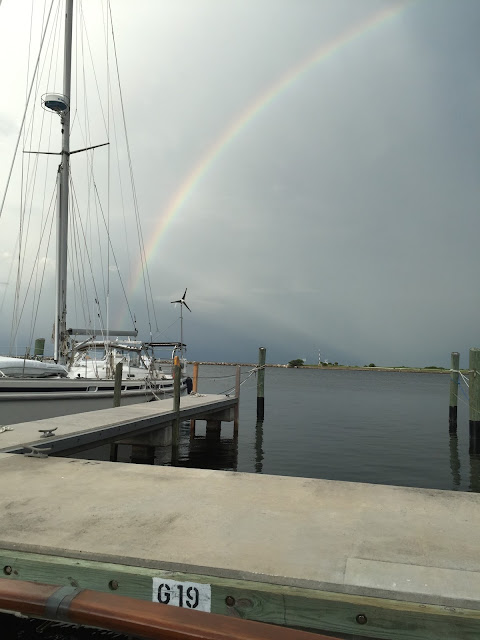 Finally the rain stops and a high pressure system moves into the Gulf!! 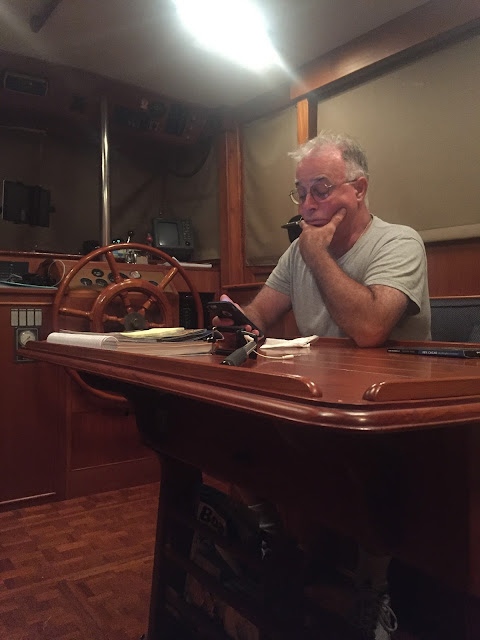 My brother checking the weather 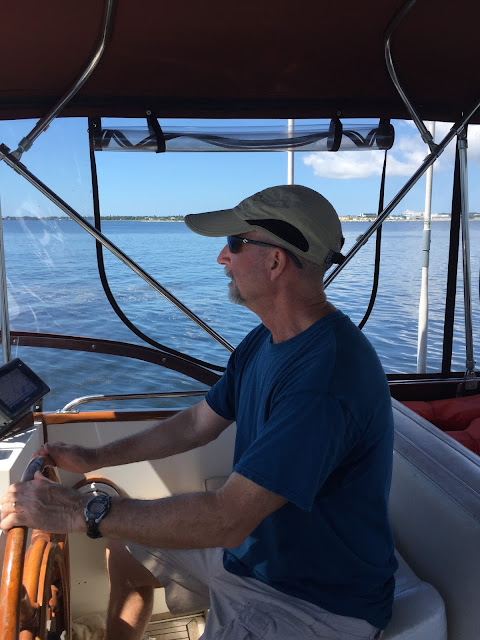 Heading out of Tampa Bay into the open Gulf 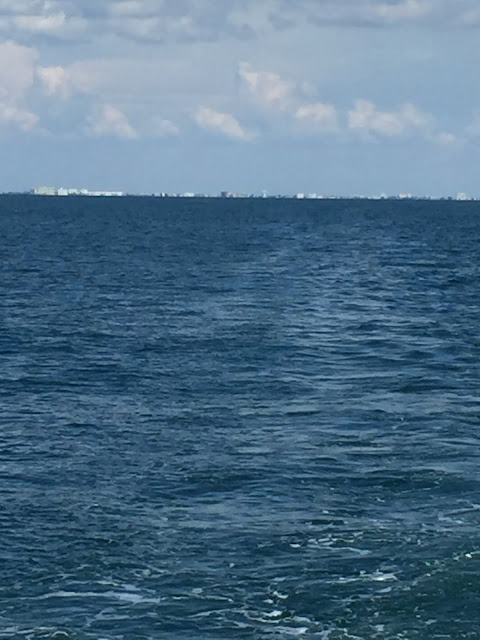 Turning NNW to 330 deg we see Clearwater to our starboard 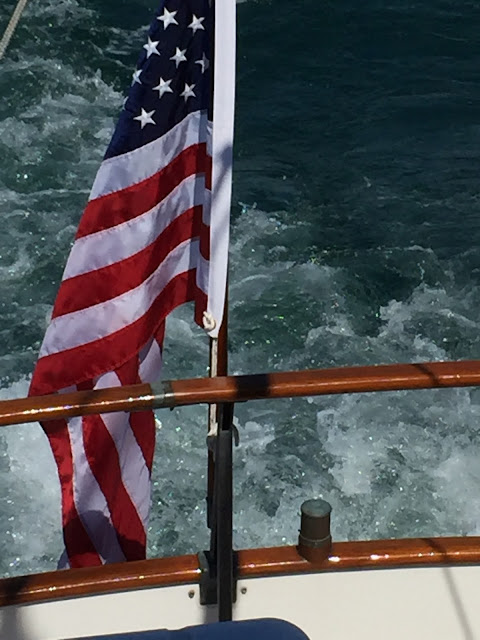 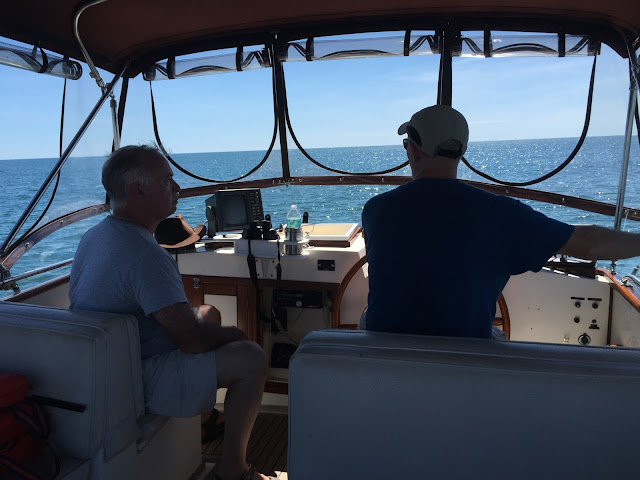 No land in sight 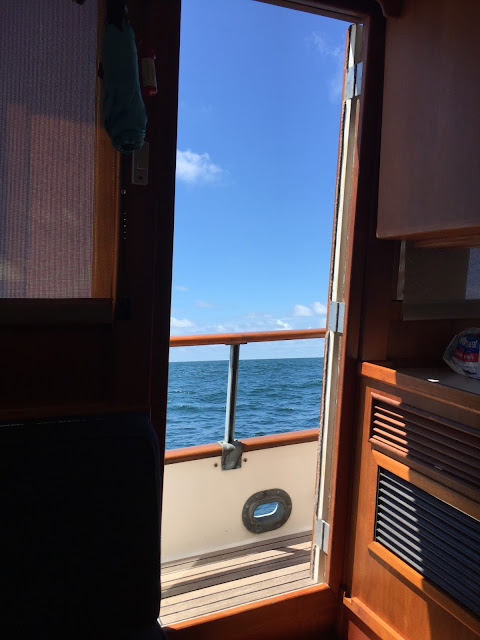 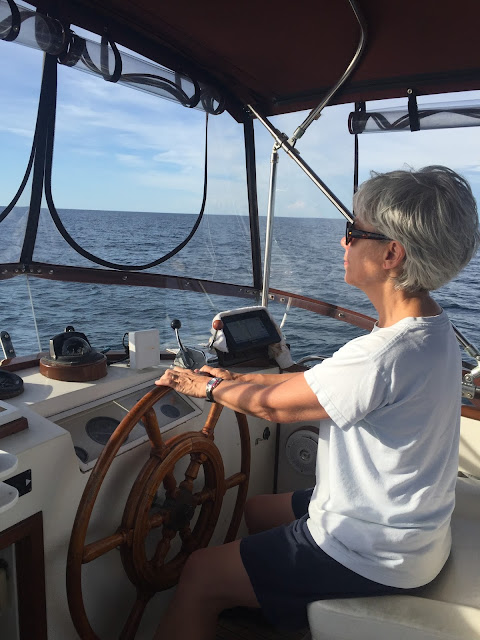 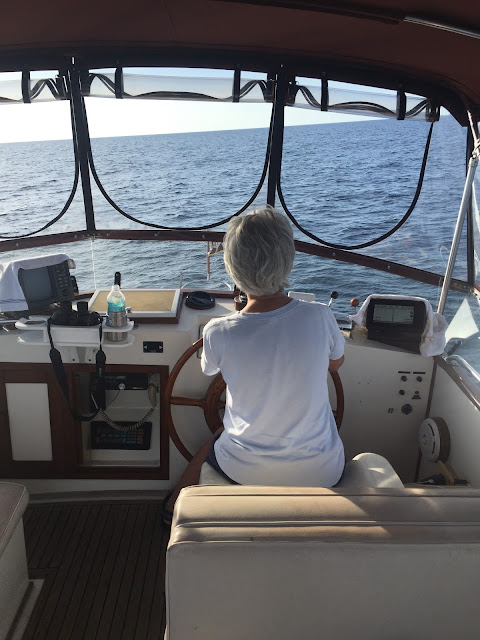 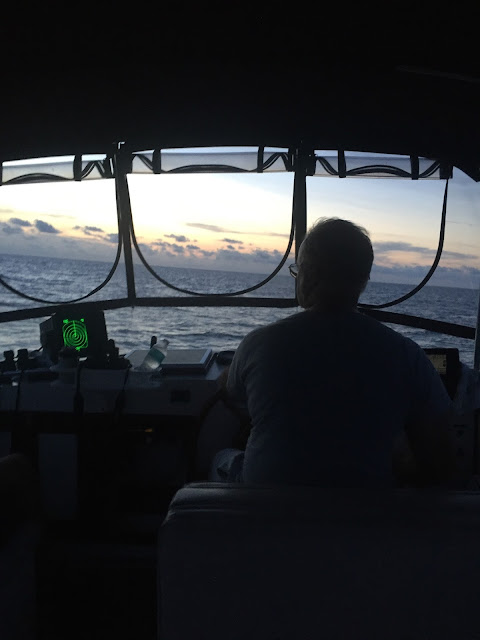 Into the Night
The radar is a must for this leg of the journey.  We detected all kinds of vessels and had to make a course correction to avoid them. 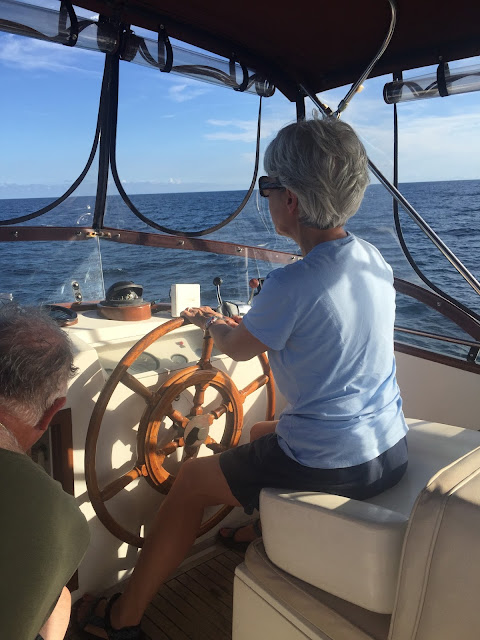 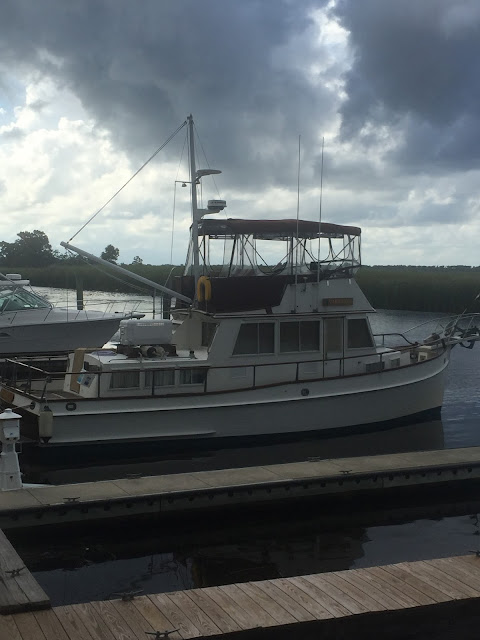 Docked in Apalachicola where the A/C was immediately turned on in Viridian.

Posted by George Sanders at 7:00 AM