On the morning of 17 August Viridian departed at first light (carefully feeling our way out through the shallow path we came in on).  Our voyage to Bear Point Marina was a 70 mile cruise that took us by familiar vacation spots that we had visited in our past.  Heading Southwest in Choctawhatcchee Bay we approach Ft. Walton Beach FL where the Gulfarium Marine Adventure Park is located.  My first visit to this location was when I was about 5 years old with my Dad and Grandfather.  We were staying at a beach house in Lagoona Beach Fl and they took me to see the sea creatures and all the mysterious ocean related things one would expect to see on the coast.  This was probably my first trip to the ocean shore.  Since then I have always had an attraction for the salty ways of life.  Later in life Meg and I took our boys to the beach for the first time at Ft. Walton and stayed at a place called the El Matador.  We drove our boys over to the Gulfarium one day.  It was the first time I had been back since I was 5.

Heading West we passed under the Brooks Bridge where the Miracle Strip Parkway connects the mainland to Santa Rosa Island.  For 30 miles we passed familiar landmarks such as Mary Ester, Navarre Beach and Gulf Breeze.  As we cruised along this route, we had to overtake our first tug that was pushing a single barge that had a large crane on it.  Her name was tugboat "Baby".  I felt awkward haling it on the radio but it worked and we were able to pass her with ease.  Tugboat Baby wanted us to give him a wave height report once we got to the commercial pass.  As it turned out, once we went under the Pensacola Beach Road Bridge,  the water became almost flat due the the wind being blocked by the bridge.  I reported this back to tugboat Baby and he was relieved.  After passing Gulf Breeze we entered Pensacola Bay at the commercial/military pass at Ft. Pickens State Park.  The captain and crew of Viridian  had to be alert to spot the buoy switch-over that happens in this particular situation.  If you miss this navigation detail you could end up out of the channel and stuck in the mud.

West of the pass we entered into Big Lagoon where the Blue Angel Highway runs along the North Bank, South of Pensacola Naval Air Station.  In 1981, I spent 12 weeks at the NAS as a candidate in the Navy Aviation Officer's Candidate School, Class 2981.  My drill instructor was GSGT "Buck" Welcher.  He had a cameo appearance in the movie An Officer and A Gentleman.  His job was to coach Lewis Gossitt Jr. on how to be a bad a$$ drill instructor.  He had just returned from Hollywood when he took my class.  That was quiet an experience!  As an added treat, we got to see the Blue Angles put on an air show for the 30 miles we made going West along Santa Rosa Island.

The GICW narrows once again for about 5 miles till it crosses the Alabama/Florida State line.  We turned North for a a couple of miles and then rounded Bear Point, and bearing to the West and found the marina on our Port side.  This was a significant milestone in our journey.  We had to be out of the state of Florida within the 90 day window we had that started on the day we purchased our boat.  Otherwise, we would have to pay a 6% sales tax to Florida.  We also had to prove we were out of Florida by purchasing fuel and/or slip fees in the state of Alabama.  Bear Point Marina was the place to do all this.  This is also a location we have visited several times in the past when vacationing at Ft. Walton Beach.  We were looking forward to eating at Flippers Restaurant and chilling out for the evening.  Once we got into a slip and tied up for the night we saw tugboat Baby churn past on its way to an anchorage on the North bank just past Bear Point. 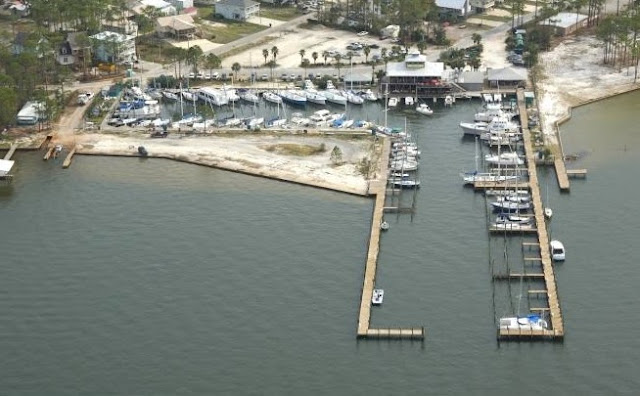 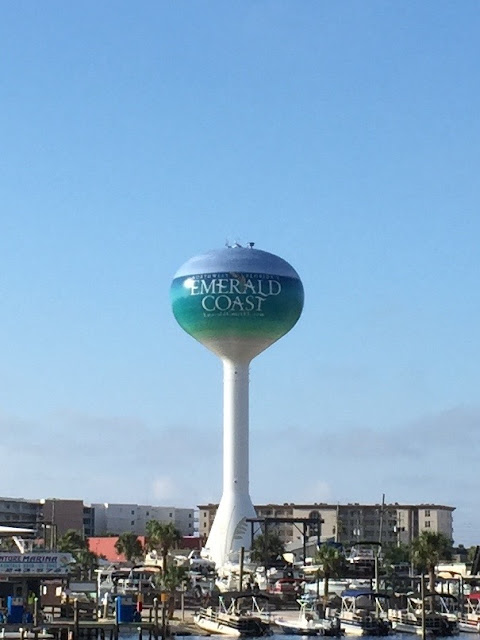 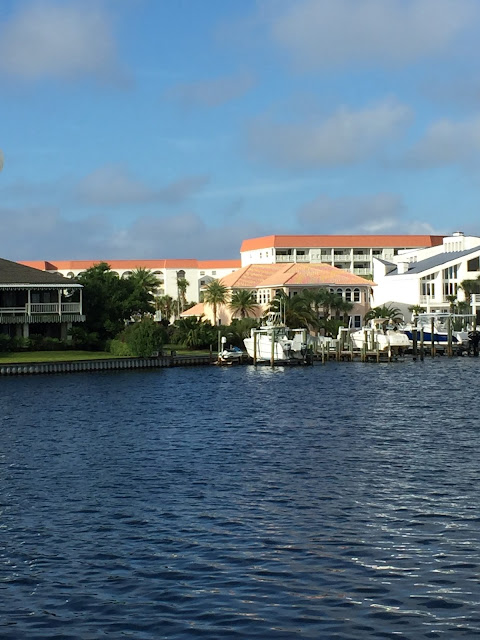 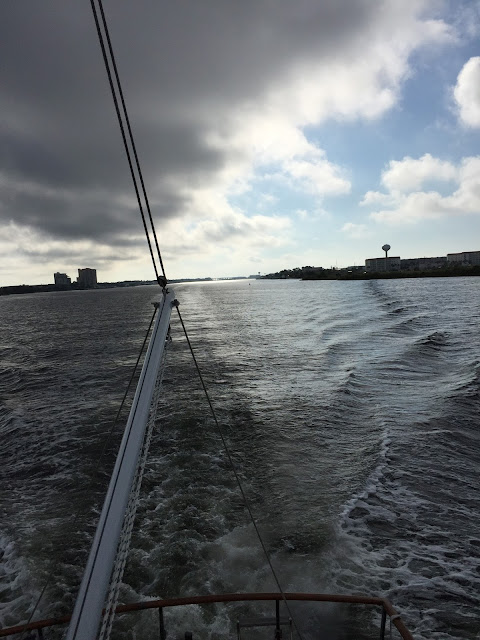 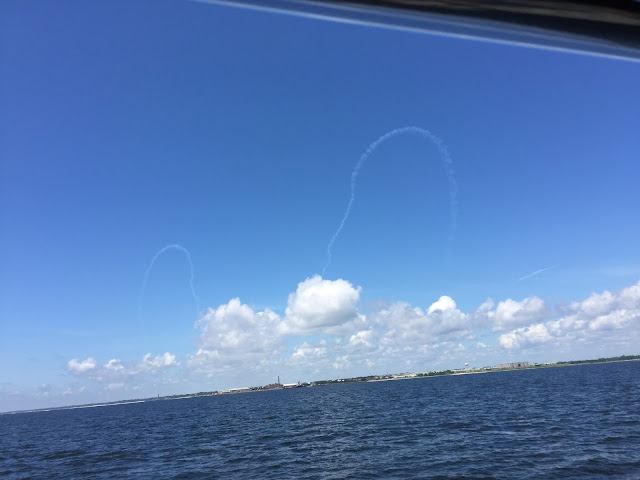 Contrails from Blue Angles Jets
Posted by George Sanders at 7:00 AM