On 18 August we untied Viridian from the pilings at Bear Point as a huge tug with 6 barges churned past us heading West.  These rigs are made up of a big tug boat lashed up to 6 barges that form a 75 foot wide by 600 feet long rectangle weighing up to 10,000 tons, not including the tug.  They are short on looks but long on authority.  They are are slow to get moving and slow to get stopped.  Their able to turn about 5-6 kts max speedwise.  Since we turn about 6.5 kts we will eventually overtake one of these things and have to pass it or stay behind it all day and maybe not get to where we want to be.  We caught up with this tug about 8 miles West of the marina where he was stopped in the narrow GICW in a 45 deg turn to starboard.  The tug crew was tying a huge diameter, (4"),  rope to the starboard forward corner barge.  The other end was tied to a big oak tree on the bank.  I radioed the captain and asked for how he would advise Viridian pass him.  He said that he was tying up so that an Eastbound Tug of the same size could pass him and advised us to stay put behind him till the Eastbound Tug passes by.  I shifted Viridian into neutral and used the bow thrusters to keep her pointed Westward.  We monitored CH-13 and heard the captains of both tugs coordinate their passing.  Soon the Eastbound tug rounded the bend and squeezed passed us and the Westbound Tug tied to the bank.  Once the Eastbound tub cleared I radioed for clearance to pass and got permission to do so.   Once past we continued to monitor CH-13 and heard the Westbound tug tell the Eastbound tug that he had wound a large rope around his propeller shaft and would be a while getting going again.  Ouch!

We idled past Lu Lu's restaurant and all the eateries lining the banks in the Gulf Shores metro region.  As we approached the mouth of the Portage River looking into the big water of Mobile Bay,  we saw a woman waving at us on the North bank.  It turned out to be our neighbor's (at home) sister who we talked with before we started our journey while she was visiting her brother.  We told her we would be going past her condo but didn't know what time of day it would be.  It turned out that as we were passing under the bridge she was driving over it and saw our boat.  She hurried home and made it to the bank in time to wave at us.  What are the odds?

Our weather radar showed several thunderstorms drifting NNW across the Bay.  It appeared that we could avoid them by keeping a steady course and speed as we cruised West across the Bay.  The view of a big thunderstorm on one side of the boat and a sunny blue sky on the other side was a stark contrast.  The water was a rich aqua (viridian) color where the sun shone and a dark green where the storm was.

We split the red and green channel marker buoys as we made our way Westward toward the commercial shipping channel that went North to Mobile from the Gulf.  A fast mover Yacht overtook us.  It slowed long enough to pass us then took off again leaving a deep ditch in the water off our starboard side.  I turned Viridian hard starboard and attempted to go bow first into the hole.  She didn't get turned fast enough to avoid a large roll to the right and then back to the left before she settled out.  We both thought we were turning over!

Turning North into the commercial shipping lane we finally picked up a breeze for the first time on the entire voyage.  It felt good as we got in line with several other vessels churning Northward.  A Coast Guard ship was stopped at the buoy that marked the approach channel to Dog River.  As we got closer it took off.  Looked like it was replacing a lost buoy.  We navigated the channel into Dog River, under the Daulphin Island  Parkway Bridge and took the channel just past Turner Marina and slid along side the fuel dock and tied Viridian to a pillar.  We topped off the fuel tanks and gave a list of repairs to the mechanics that we wanted done while we took 3 weeks off to plan our cruise up the Tenn-Tom waterway.  Our son William drove our car down the next day.  Since it was his birthday we took him to Original Oyster House and Seafood Restaurant in Spanish Fort Mobile.  He spent the night with us on board Viridian and we all drove home to Lacey's Spring the next day.  We would return to Dog River with a Tenn-Tom Cruise plan and complete the second half of our voyage North via the Tennessee River and then East to Ditto Landing. 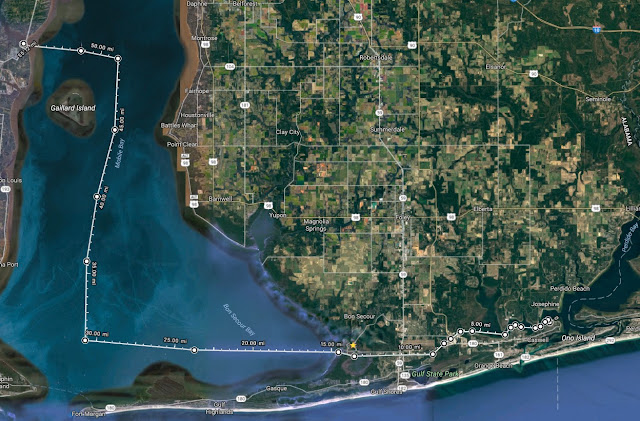 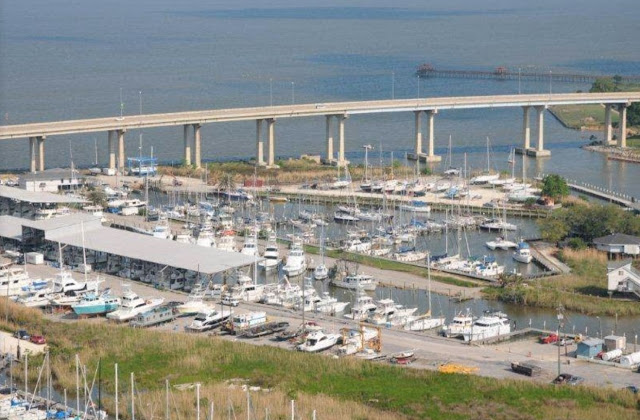 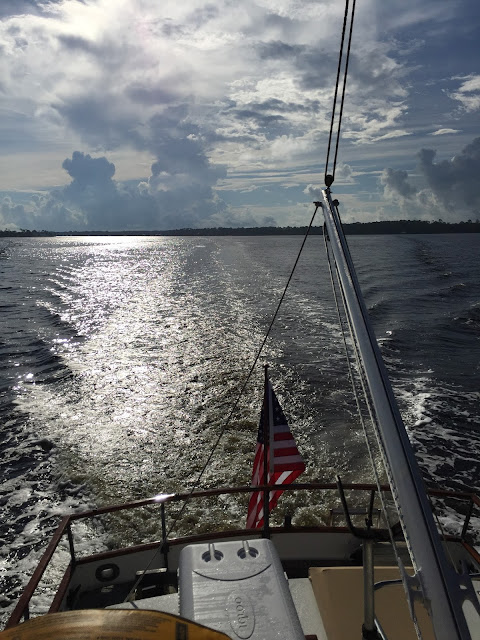 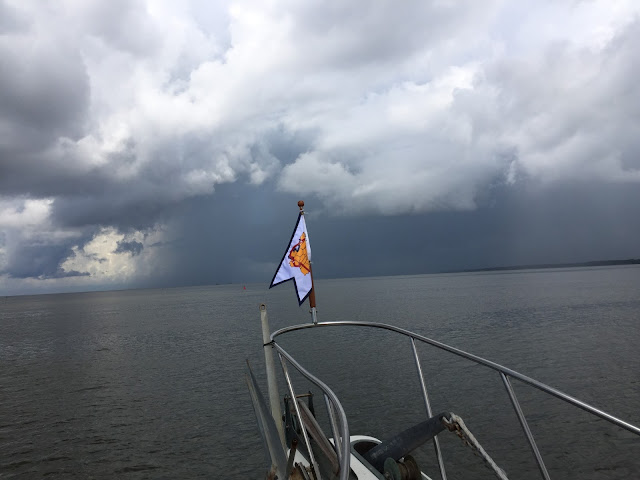 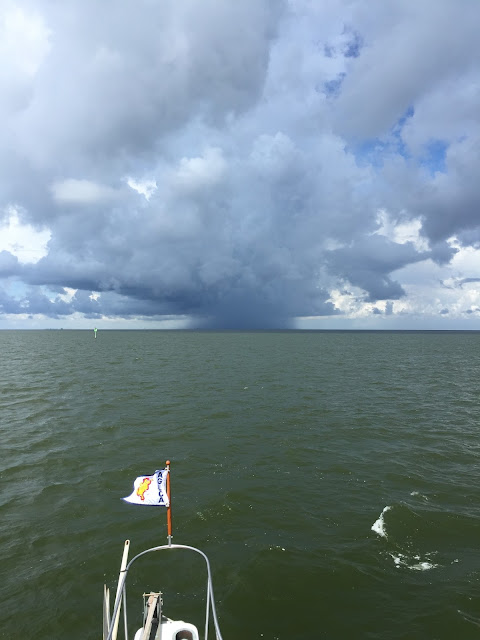 Dodging the storms on Mobile Bay 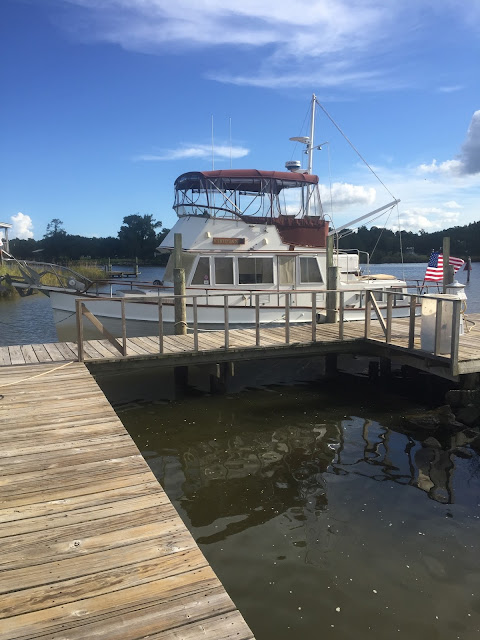 Tied to the fuel dock at Dog River Marina-Mobile, AL 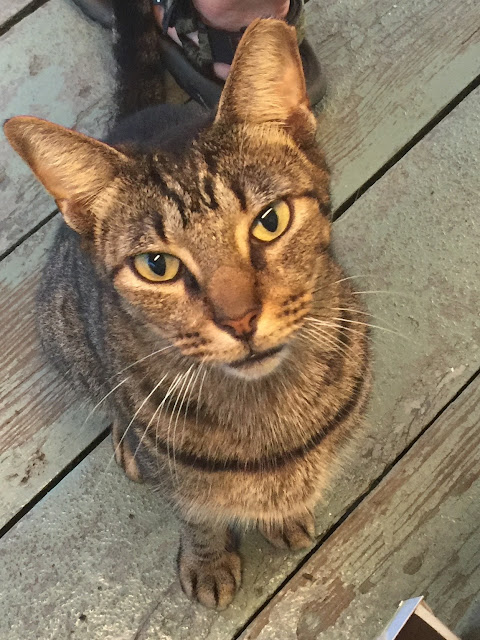 Felica (who is male) is the official welcoming committee at Dog River.  He expects to be invited to supper on every boat that docks there. 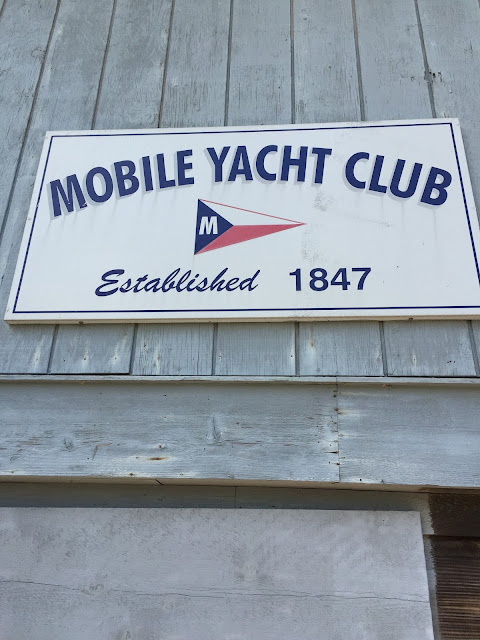 A nice place to eat.... if Sonny invites you 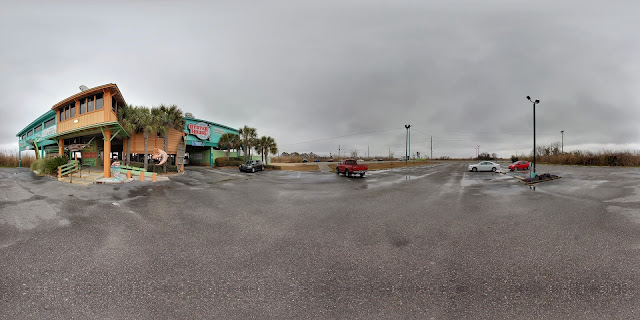 What's on the  menu at The Original Oyster House and Seafood Restaurant
Posted by George Sanders at 7:00 AM