The crew of Viridian spent 3 weeks at home in Lacey's Spring AL visiting friends and relatives and preparing a cruise plan for attacking the Tenn-Tom North from Mobile.  The Captain felt much better about navigating the 500+ miles back to Huntsville, AL after documenting all the locks and possible anchorages and marinas at the end of a 50-70 mile cruising day.  Spending time memorizing ActiveCaptain satellite imagery overlay-ed with real-time anchorage and marina locations served as a virtual voyage experience and allowed for backup and alternate overnight possibilities in the event the first choice was not available.

On Friday 16 Sept 2016 we rented a one-way car and made our way South to board Viridian, who had just had some maintenance work done by Dog River Marina.  We now had the generator back in working condition, the toilets in the heads fixed, all the fluids and filters changed and a brand new main engine exhaust pipe installed.  A sea trial was conducted and all systems were go.

Next day, Saturday, brought steady rain, fog and low visibility so we decided to stay put and set sail on Sunday as it appeared that a front would push the weather on South past us and there would be less traffic encountered in the Port of Mobile.   The Captain plotted a 76 mile course that would eventually take us to an anchorage at MM 65 known as Three Rivers Lake.

Sunday 18 September, we cast off our lines at Dog River Marina and idled out at first light.  A red sky in the East filled the gap under the Dauphin Island Parkway bridge as an alligator crossed the channel in front of us.  There were still some rain clouds showing on the weather radar but were moving to the Northeast and clear skies were promised later in the day.  Once under the bridge, Viridian was  set at cruise speed (6.5 kts) and navigated the narrow channel East to the larger commercial shipping lane that lead North into the City of Mobile Port and the mouth of the Mobile River.  As we turned North the scud clouds and fog seemed to be getting worse the further North we went.  The tops of the tall buildings in the City of Mobile disappeared into the grey clouds as rain drops started peppering our cabin.  The Captain ordered all windows zipped closed except the one directly in front of the wheel and the on-board radar switched on with a one mile radius resolution.  The rain was now falling hard and visibility was limited to about a half mile.  Viridian was slowed to idle speed as we cruised past HUGE tankers docked on the port side and Little Sand Island that sheltered an old WWII cargo ship on the starboard.  The channel narrowed as we approached Choctaw Pass and entered into Pinto Reach past the Pinto Island Terminal.  We were now in the mouth of the great Mobile River and rain was pouring down in buckets.  Our radar painted a clear picture of both banks and the occasional working tugs that were maneuvering back and forth in the river.  We eased on up the Mobile river past the Harrison Brothers Dry Dock where several of the U.S. Navy's new stealth destroyers were being manufactured.  A worker on one of the ships waved to us and said "Nice Boat"!  We acknowledged his gesture as our oversized American flag seemed to come to life on the stern.

As we passed the Shell Chemical LP Terminal and approached the Cochrane-Africatown USA Bridge, our radio crackled awake and we heard over the pounding rain a Pan-Pan, Pan-Pan, Pan Pan, which is the second most important distress call that can be made on the water.  It turned out that a Tug pushing 6 barges loaded with boulders had broken loose and were drifting free in the river.  We could only see a half mile in front of us so the Captain ordered the radar to be re-adjusted to see 5 miles.  Viridian was slowed an idle and eventually put into neutral as we assessed the situation.  We monitored both CH-16 and CH-13 to get a better picture of what was happening and hear the chatter between the Coast Guard and the Captain of the distressed Tug.  The exact location of the Tug could not be determined so Viridian sat still until a better picture could be painted.  Our radar did not show any traffic ahead or behind us for the 5 mile radius it was tuned to so we just inched forward and listened to the radio.  After what seemed like forever, we heard the Captain of the distressed Tug say he and his crew had captured the runaway barges and had them back under control.  The crew of Viridian breathed a sigh of relief as we bumped the engine RPM back to half speed and started once again on our voyage North.  About 5 minutes later we saw the Tug on our radar and a little while later she appeared out of the fog and rain off our port bow.  We passed on the "One" and congratulated her for getting everything back under control.

By now the rain was starting to slack off and the fog was lifting so that we could see what was ahead without using the radar.  We turned to port as we approached Twelve Mile Island that split the Mobile River.  It looked like you could go either way but we stuck to the marked channel and soon came back into the main river bed.

Continuing to wind our way North we hailed the RR lift-bridge operator on CH-13 at MM 15 and at about MM 21 we crossed under the General W.K. Wilson Jr. Bridge (I-65).  The Tensaw River spilled into the Mobile River at MM 41 as we approached our first opportunity to drop anchor for the night at David Lake.  We were making good time so we decided to push further up river and see what the other spots looked like.  MM 47 was where the Alabama River emptied into the Tombigbee River to make the Mobile River.  Further up river was the Alabama River Cutoff, a narrow channel that connects the Alabama River to the Tombigbee, North of the natural confluence.  According to the ActiveCaptain reviews on anchoring here, this spot required the use of both a bow and stern anchor.  However, you could push deeper into the cut and find enough swing room for a bow anchor.  Also, reports of snags and hung anchors were enough to discourage us and kept us heading up river to the last spot we had identified, Three Rivers Lake at MM 63.

Our total distance from Dog River was 76  miles once we reached Three Rivers Lake since MM 0.0 is located where I-10 tunnels under the Mobile River.  The approach to this anchorage requires crossing a sand bar at the entrance to a narrow channel that opens into the Tombigbee River on the LBUR (left bank up river) side.  We slowed to idle speed and watched the depth finder tick down to 1 ft as we slid over the bar and into the channel.  The water immediately became deeper as we headed into the 30 foot wide waterway that took us about a mile and a half to where it opened up to a larger body of water.  Unfortunately, there was another sand bar that we had to get over in order to get to deep enough water to drop our hook. Bumping the transmission into forward and back into neutral gave us a crawl speed.  Looking at trees on the bank and comparing them to a fixed object on the boat was the only way we could detect any motion.  The prop was once again engaged but there was no motion detected and the Viridian was on ground!  The bow was stuck in the mud.  Since we were going so slow we were able to back out and try another point of entry until we got over the bar and into deep enough water to anchor.  Although the sun was shining and patches of blue sky could be seen, we could still see and hear a thunderstorm in the area and the weather radar still showed a few drifting our way.  This was our first time to drop our anchor since our training session at St. Petersburg.  The Captain operated the windless from the fly bridge while the Admiral directed the left-right-forward-backward hand signals till we had a scope of 10 (about 100 feet of chain rode) piled on the lake bottom.  There was no wind and barely any current detected.  A beautiful rainbow appeared in the East as the thermometer and the humidity hovered around 95.  We might as well have been somewhere on the Amazon.  There was very little sign of civilization since we passed the I-65 bridge.  We fired up the generator and turned the air conditioners on full blast.  This cooled off the cabin while the Admiral/First Mate prepared our supper of scratch spaghetti.  The sun set quietly so as not to disturb the mirror flat water on the lake.  A bass fisherman zoomed past us and out of sight as soon as we lit the anchor light located on top of the mast.  After dark we went out on deck with a night vision goggle to check out the night time wild life and the billions and billions of stars that shined on a moonless night.  This only lasted a few minutes because we became covered with mosquitos from our waist down.  Back into the cabin we went and turned off the air conditioners and turned on the bedroom fan that blew all night till we got up at 4 AM. 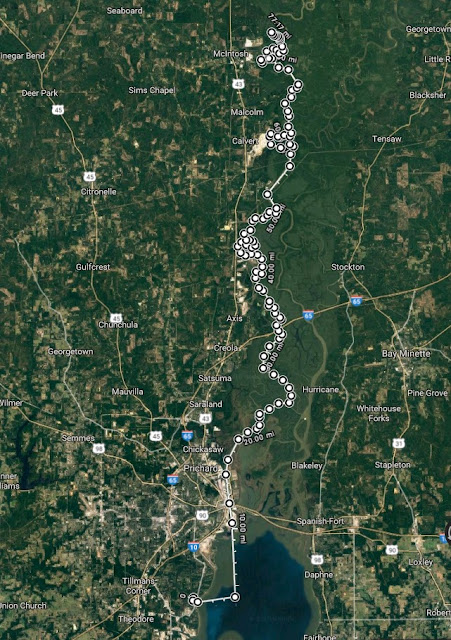 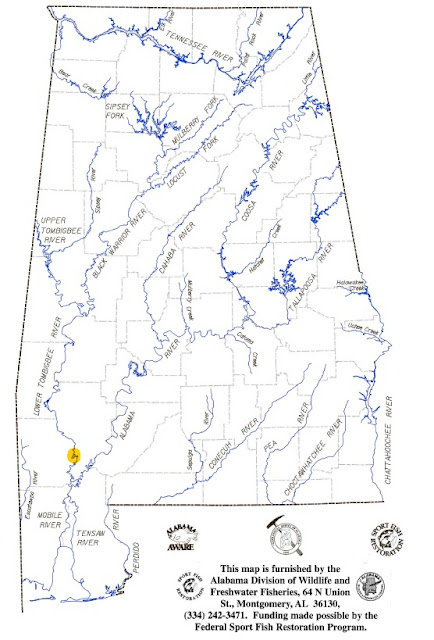 Three Rivers Lake is Located at the Yellow Dot 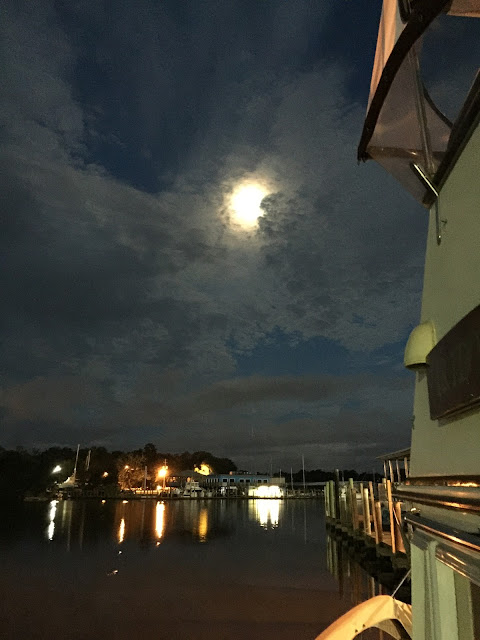 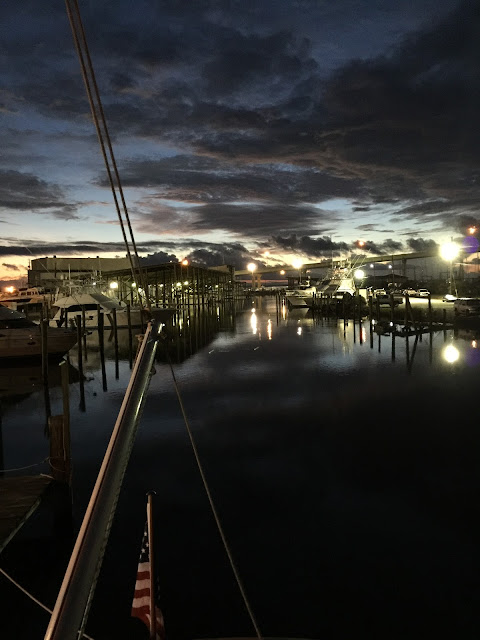 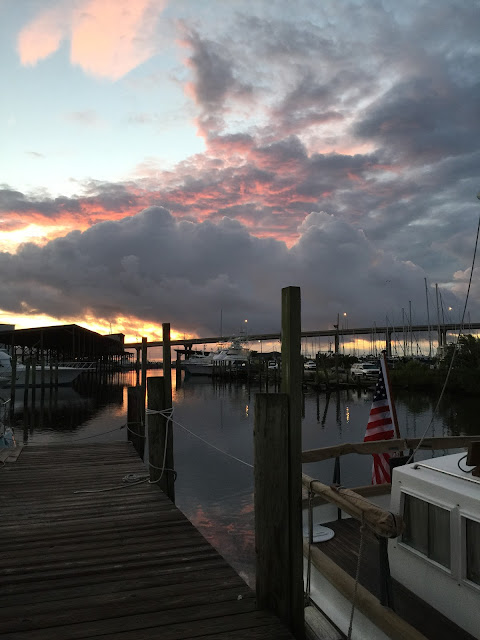 What was that "Red in the Morning" Saying? 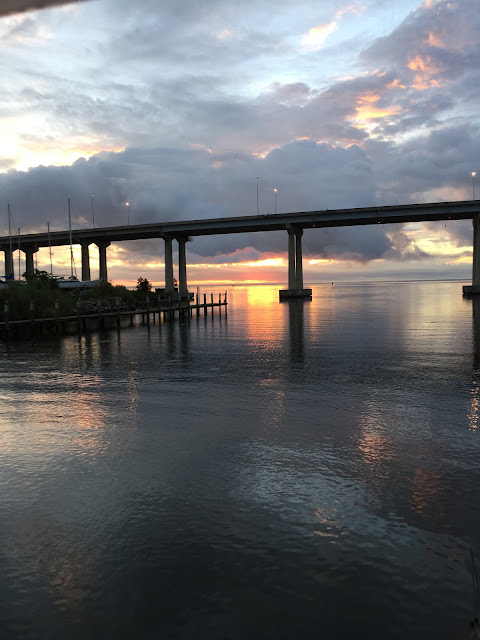 Heading into the Rising Sun 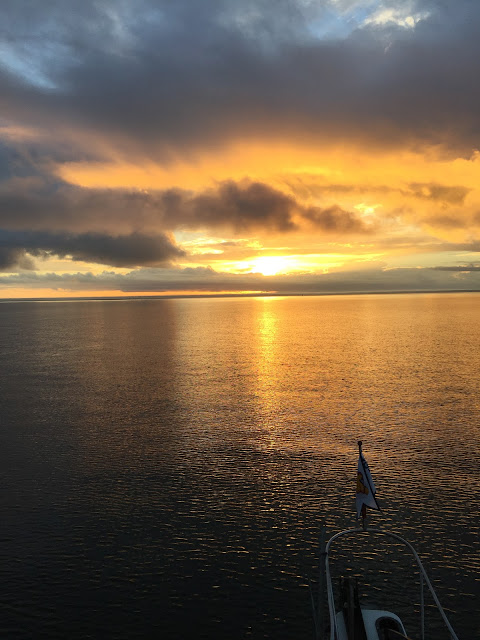 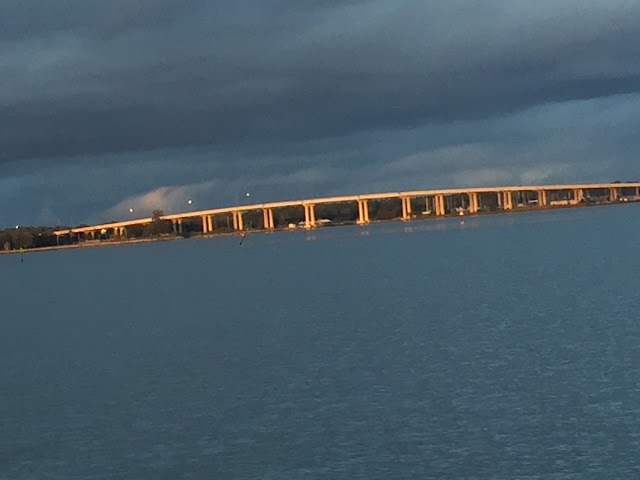 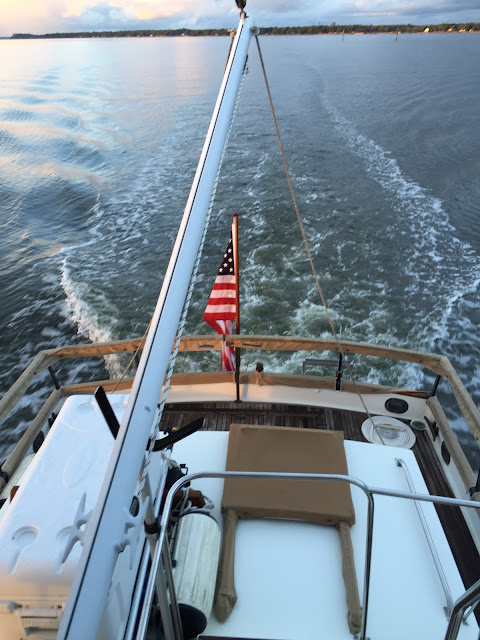 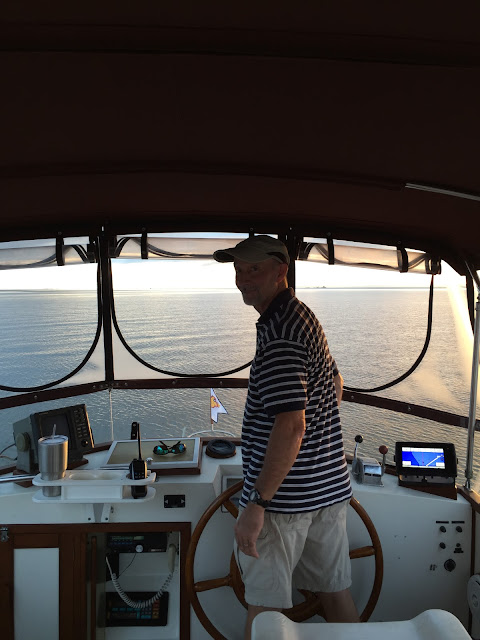 The Calm Before the Rain Storm 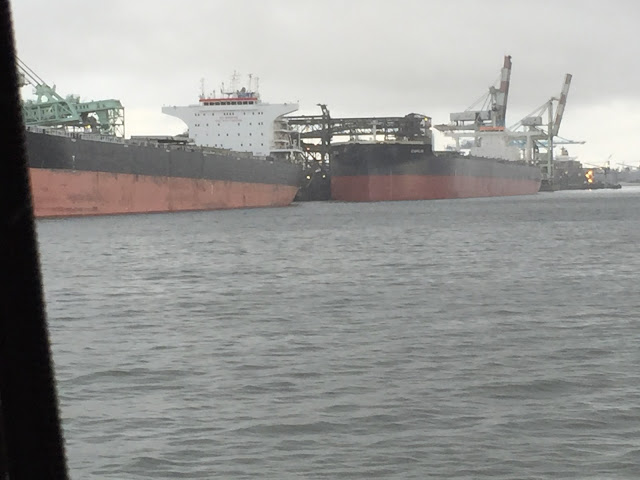 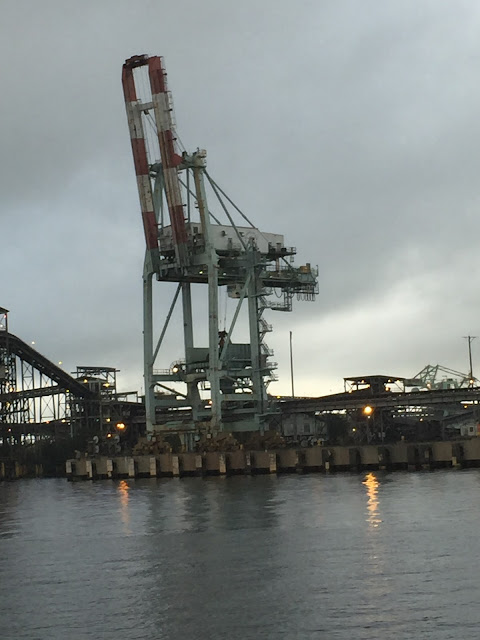 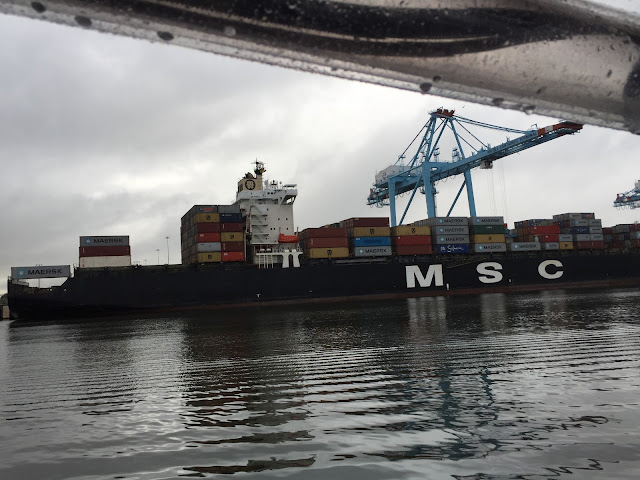 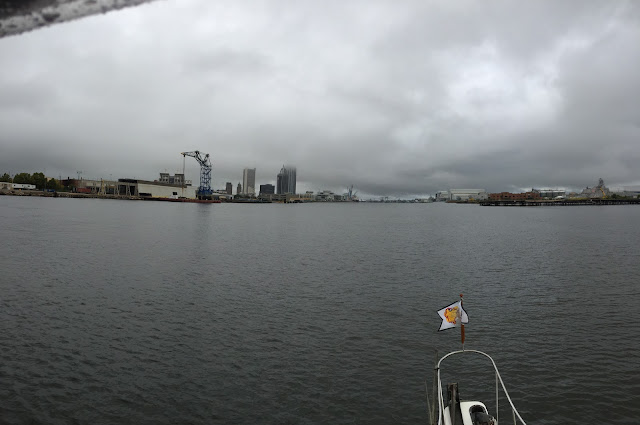 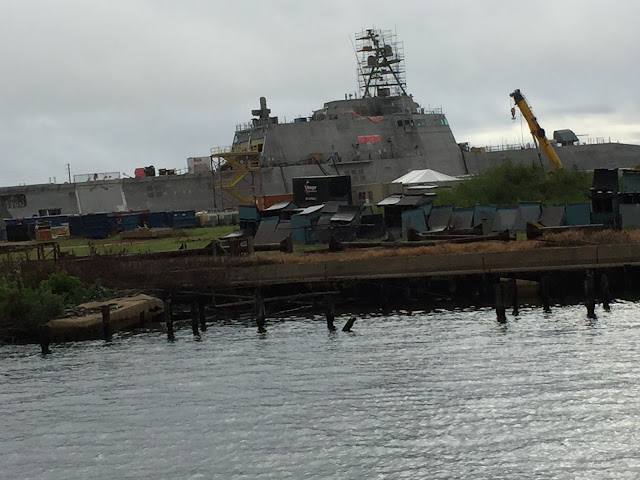 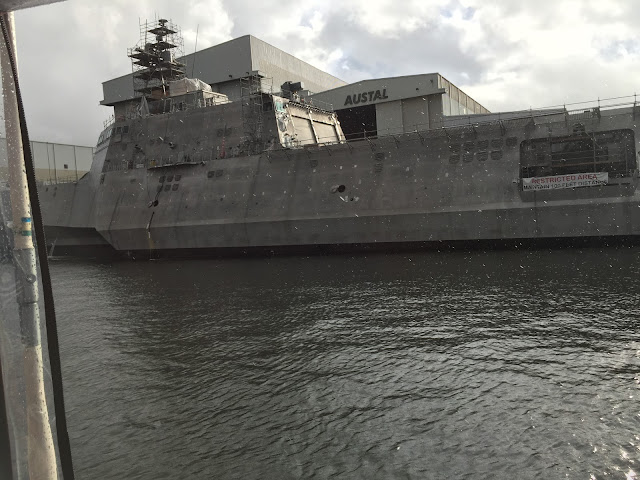 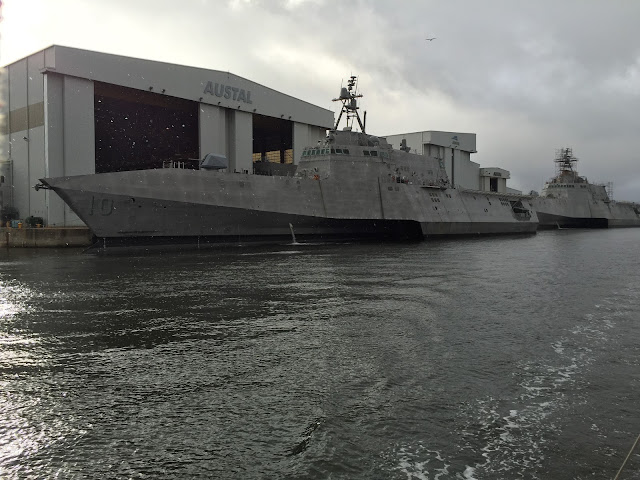 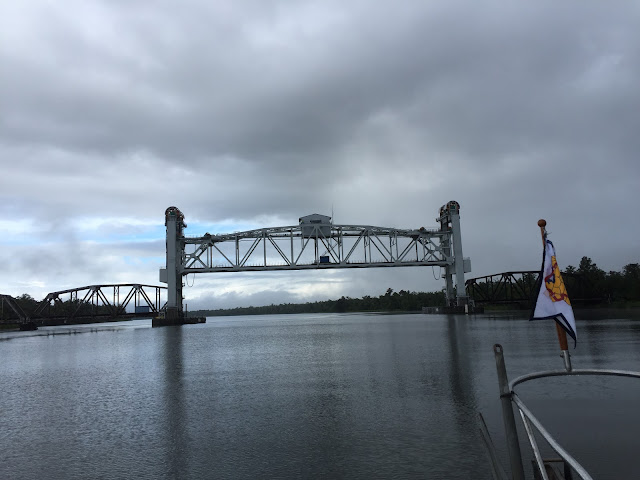 Our First Encounter with a Railroad Lift bridge 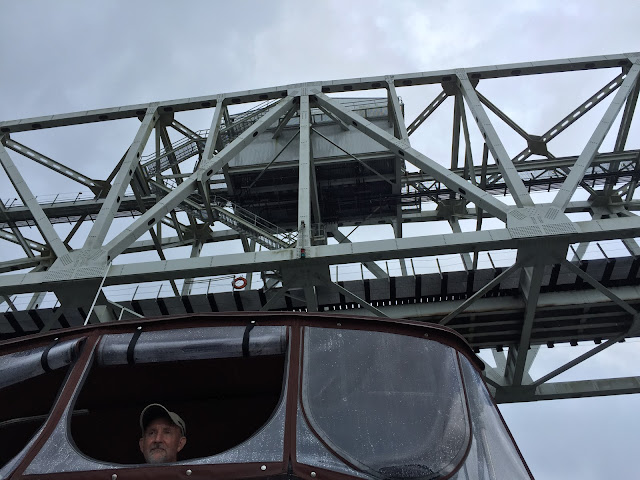 All we needed was 24 feet for clearance but the operator took it all the way up.  I was glad he did! 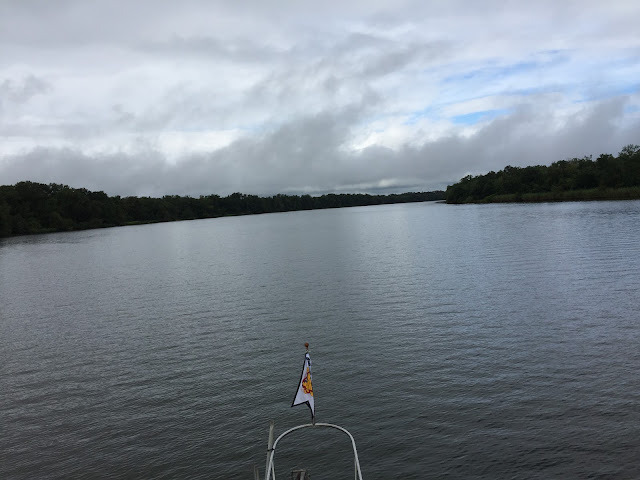 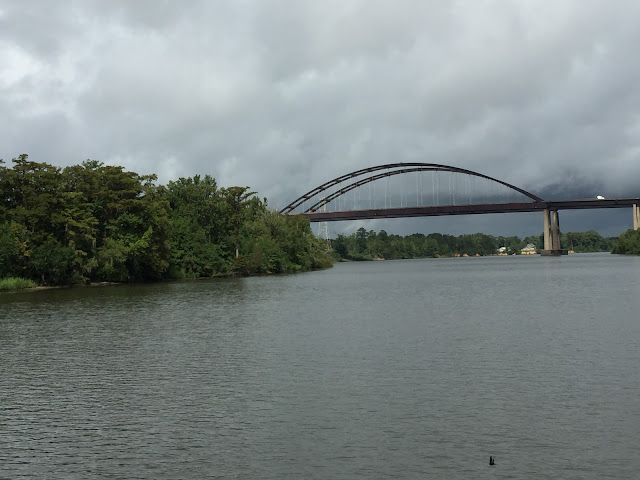 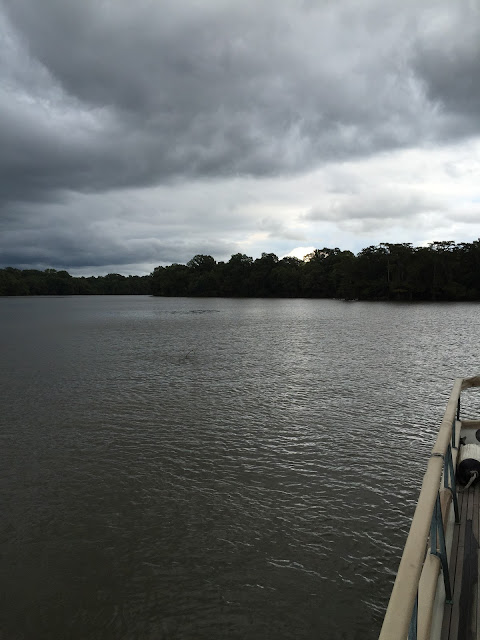 A view from our anchorage in Three Rivers Lake 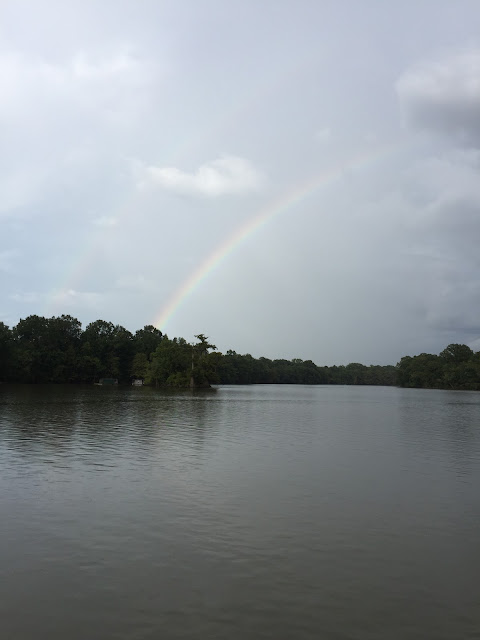 The last of the thunderstorms and a double rainbow! 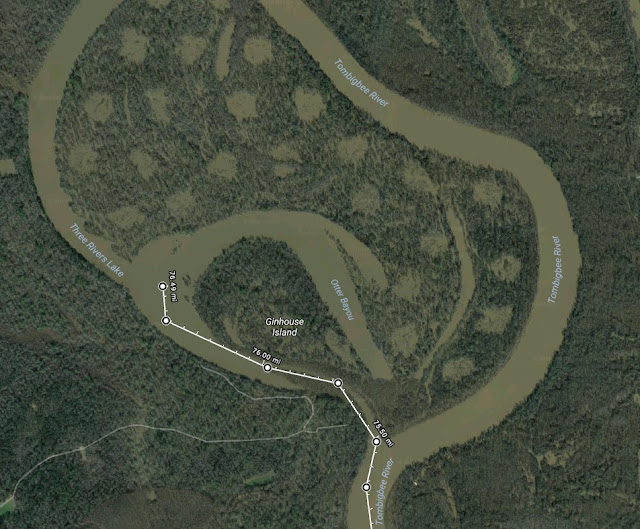 Anchorage Location in Three Rivers Lake
Posted by George Sanders at 7:00 AM