Having a Ball - For a Few Days

There are a few ways to secure a boat while staying at a location for a while and one of them is attaching to a mooring ball.  A mooring ball is just a big inflatable rubber ball attached to the seafloor via a chain and some kind of substantial anchor.  It may have a ring on top to tie onto or a tether with a smaller float you can grab with a hook, pull onboard and tie up that way (much easier).  So why stay on a mooring ball when you could just drop the anchor and stay for free you ask?  Well that's a valid question and most boaters would most likely opt for that rather than hassle with snagging a ball.  I say hassle because some balls are harder to snag than others.  We wanted to get some experience securing Viridian using a mooring ball, since we haven't done this before, and see if we needed something other that a boat hook to accomplish this task.  So when a ball became available we jumped at the opportunity to hook one and stay a few more days that way.

The ball we rented (much cheaper that staying at the marina and we are able to use the marina facilities), just had a 4 inch diameter steel ring laying flat on the topside.  You had to lean over the side with a boat hook to snag the ring, then somehow get a bow line run through it and back up to the boat to tie off to be secured.  Ok, sounds simple enough, right?  It is 6 feet from the bow of Viridian to the water and the boat hook, fully extended, is 8 feet long.  Just send the first mate forward with the hook in one hand and the bow line in the other and get the boat close enough and wait for the thumbs up indicating we are secured, easy-peezy.  Let's discuss some "factors" that have to be considered in order to accomplish this simple task.  First there is the wind factor.  The wind has been a factor since the beginning of our trip and not a day goes by that we have to compensate for it in some way.  As a matter of fact, we no longer have our White Looper Burgee to fly on our bow because the wind whipped it off its mast, blew it over the top of Viridian and into the river where it was was run over by a large cruiser never to be seen again.  This happened this past Friday as we approached Ft. Myers.  So the wind must be dealt with constantly.   As you may recall from previous posts, we no longer have the luxury of a bow thruster, the thing that helps mitigate the effects of wind when maneuvering in close quarters or at slow speeds (a discussion for another day).  Wind on the bow affects all boats differently, most of the time you don't even notice it except when it really matters, like hooking a mooring ball or docking in close quarters.  Viridian wants to yaw left or right if the "angle-of-attack" to the wind is not zero, and if never is.  Also, when the prop in enguaged, Viridian's stern wants to "walk" either to the right or left depending on being shifted into forward or reverse.  (Couple this with the wind affect and you are doing a 180 away from the ball before you know it).  Assuming the captain can approach the ball in white capping wind conditions slow enough and close enough to just touch it with the hook, gives a window of opportunity of only a few seconds for the first mate to hook the ball and get a line through it 4 feet below the deck.  Since the wind is blowing, the ball is straining downwind on its rode and there is no slack to bring the ball up within reach if you do manage to hook it.  If you miss with the hook then it's another "go-around" for another approach.  After 3 or 4 go-arounds the first mate managed to hook the loop on the ball!  Now what?  The wind took over and Viridian began to move away from the ball and the fist mate held on with all her strength until the hook popped off the end of the stick.  (Note to self, we need a better way of capturing a ball).  Our handy dandy snubber line was laying across the forward trunk and it had a shiny steel hook braided into the end of a 10 foot long,  3/4 inch diameter line.  If this hook could catch the ring on top of the ball then at least we could secure Viridian and noodle out a way to get a more permanent solution that we could easily detach from when we were ready to leave.

After a few more "go-arounds" we were able to snag the ring on the ball with the snubber hook, tie it off to a bow cleat and rest for a moment while we figured out what to do next.  Time to launch the Tender!  I motored the dingy along side Viridian until I could reach the snubber line with my hand and hold on while the first mate handed me the end of a 35 foot bow line.  Walking the free end down to the ball I passed it through the ring and back up to the other side of Viridian's bow where it was secured to a cleat inside.  Now all we had to do was unhook the snubber and let the bowline hold us on the ball.  Well, that's a lot of work just to accomplish the same thing as simply dropping the anchor and making a sandwich.  There is that "perceived" sense of added security knowing the mooring ball won't drag during the night in high winds.  However, we are only as secure as the weakest link from the boat to the seafloor and that is most likely our dock line that runs through the smooth steel ring on top of the ball.  All of our dock lines are new but still we monitor them for signs of wear.  Just for extra insurance, I will run a 3/4 inch diameter kevlar line to back up the bowline.  To get away from this arrangement, we simply untie the bow lines from inside the boat, let the wind pull us away from the ball as the line slips out of the ring and away we go.

This exercise was just another lesson in boating 101.  We now have succeeded in snagging a mooring ball and securing the boat in less that optimal conditions.  All this adds up to confidence in our ability to manage our floating house and letting us enjoy the destination.  After all, this is called "pleasure cruising".  Conversations with other boaters along the way will likely yield better solutions to securing to a ball.  Until then, we are having a ball! 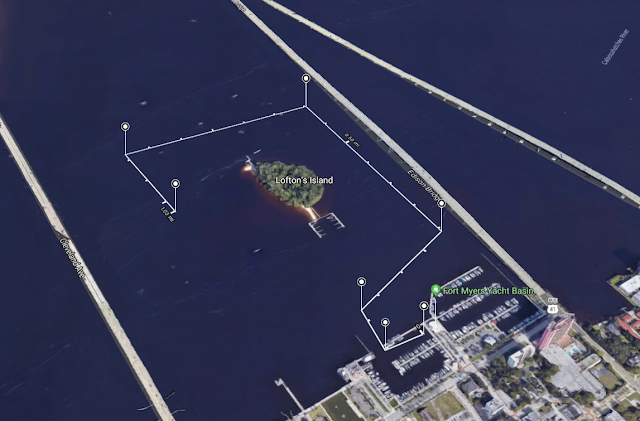 Our path from City of Ft. Myers Yacht Basin to the mooring field 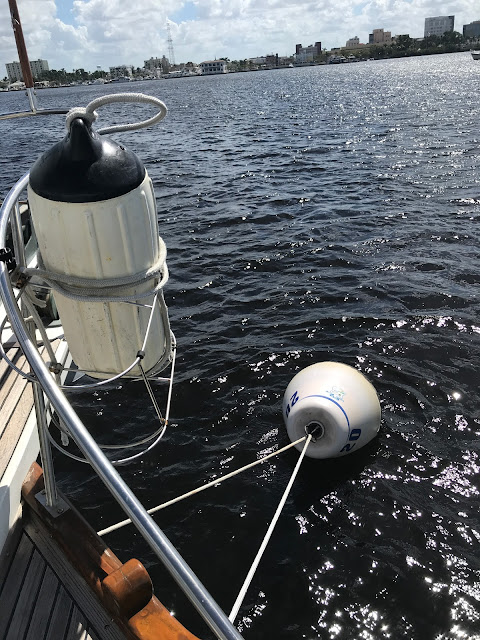 On the "Ball" in high winds 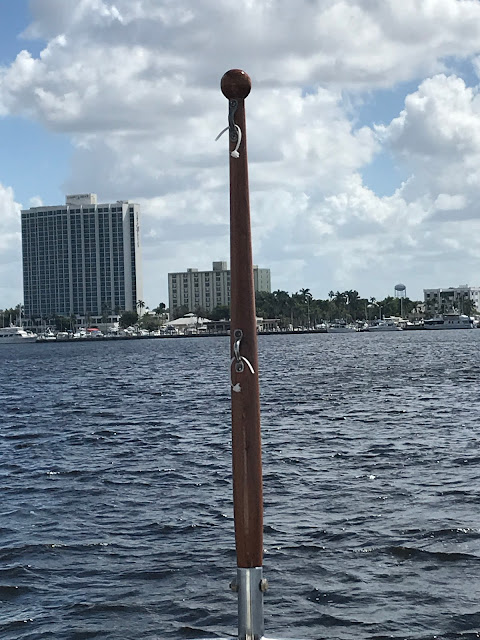 Where our AGLCA burgee used to be. (got another one ordered) 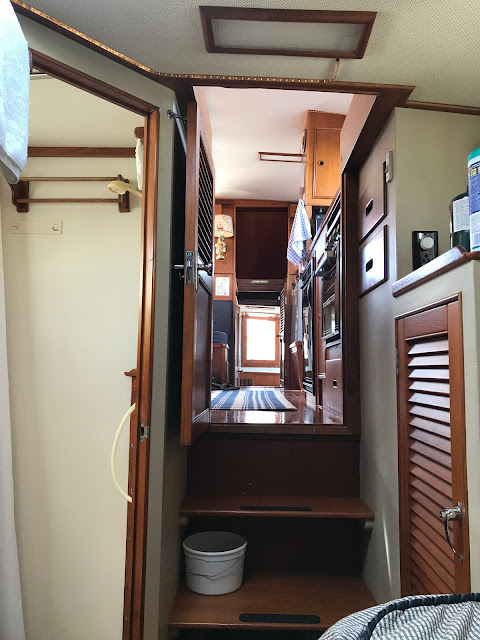 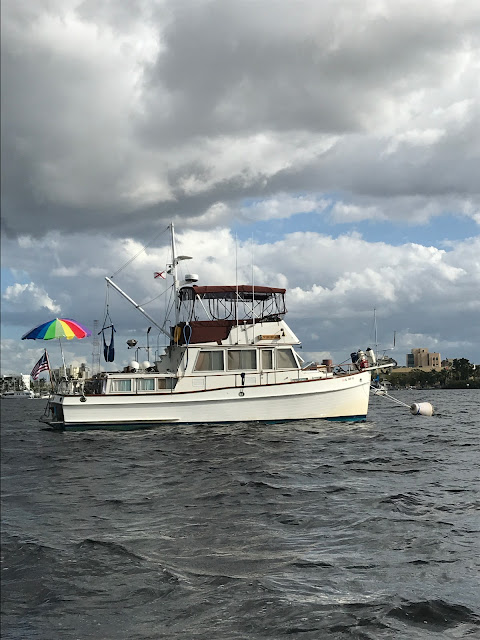 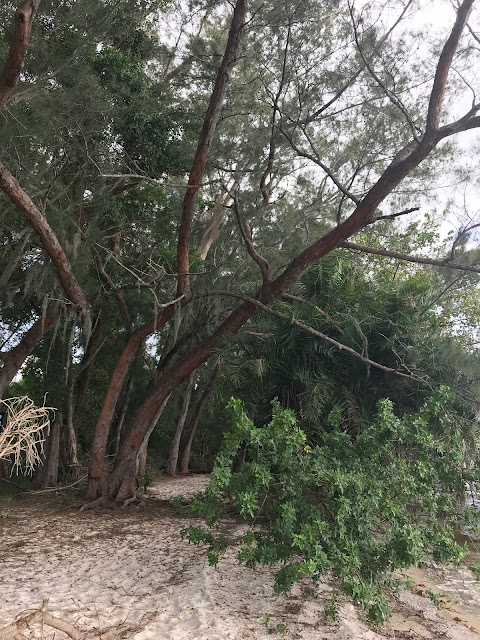 A stop on Lofton's Island via dinghy 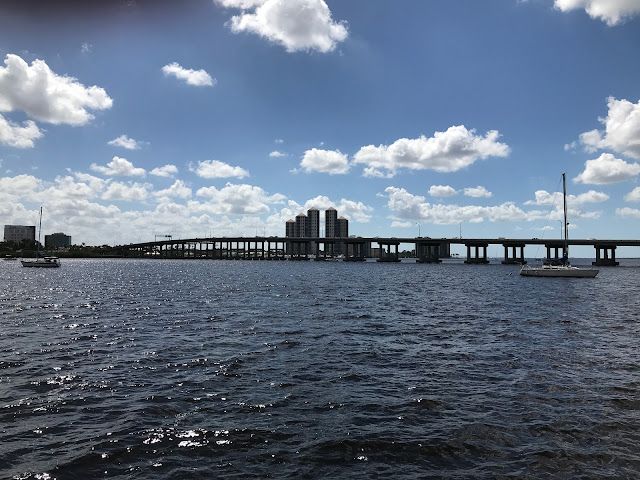 A view from Viridian between the bridges in the mooring field of Ft. Myers, FL

Posted by George Sanders at 2:04 PM