Little Diversion Canal in Cape Girardeau turned out to be one of our top 5 anchorages on our Loop adventure.  After spending all day on the fast moving, muddy, churning with debris filled, monster tugs "Old Man River", this tiny inlet was an instant relief at the end of a long day.  The current was so strong we had to pass the Little Diversion inlet before turning up river to make our approach.  As soon as we turned in to the Little Diversion inlet, the Mississippi released its grip from Viridian and we were instantly in smooth, clean water.  A RR bridge about a half mile up stopped all large boat traffic in the canal but left a 90 foot wide by 30 feet deep channel for several boats to drop a hook.  The slight current kept all boats pointed up stream and the tall tree lined banks protected us from any wind coming from the north or south.  The bottom was soft mud and the anchor set on first try.

Not a ripple from the tug traffic all night and Viridian and Gypsy Spirit weighed anchor and slipped past the other two Looper boats that had come in behind us.  It was 0630 and we checked the AIS for commercial traffic coming down river before powering upstream back into the Mississippi river then turning down river to head south to Cairo where the Ohio meets the Mississippi.  Shortly after  getting underway, the USCG came on CH-16 to announce that 10 barges had broken loose at a location about two hours south of us.  I just happened to switch our secondary radio to CH-73 and picked up the conversations between tugs that were rounding up the loose barges and it sounded like cowboys roping wild steers on the open planes.

This alert was mistaken by the commercial traffic as an "All Stop" situation.  As a result, we were the only boats moving on the upper Mississippi and started to wonder if we were missing something.  I decided to call the USCG on CH-16 and get an update to see if we should avoid the area altogether.  The USCG person said that it was all clear and to proceed on through.  So we did.  Later, a tug Captain called the USCG and asked if they could start moving too.  The USCG said that they never issued an "All Stop", just a "Proceed with Caution".  This was news to the tug captains so they got him to repeat that statement again.

By this time we had arrived in the Cairo area where there was still a minor flood warning in effect.  The Ohio River meets the Mississippi here and we  made a port turn and our speed was cut in half.  It felt as if we were going nowhere fast.  The river widened and barges and tugs were everywhere.  The muddy flood waters spread out like an ocean and the sun beat down a 94 degree temperature and with the wind at our back, we were stewing in our own juices.  The first mate went below,  turned on the generator and fired up the A/C.  It was smothering hot on the flybridge and aluminum foil was used to shield our electronic equipment from the direct sunlight that heated it up like a fried egg.

We soon approached the Olmstead Lock and Dam construction project, an over $3B project that will replace the two upper locks and make it less congested on this high tug traffic area.  We sailed right on past in the premarked channel and into another debris area filled with trees, sticks, logs and a basketball or two.

As the sun began to sink behind us it started to cool a little and the views on the river at late afternoon were spectacular.  We pulled into our dock at the Paducah City Docks, tied up, hooked up and turned on the A/C.  Shared another meal with Gypsy Spirit and crashed as soon as our heads hit the pillow.

Paducah, KY is where the Tennessee River meets the Ohio River,  We will spend two nights here before heading down the Cumberland River to reach Green Turtle Bay Resort, where we will stay a couple of nights before continuing south on the Tennessee to our point of crossing our wake at Grand Harbor Marina on PickWick Lake, MS.

That's the news and here are the views: 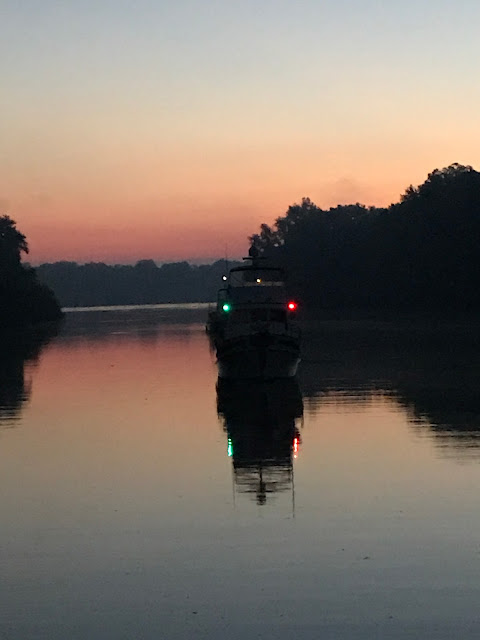 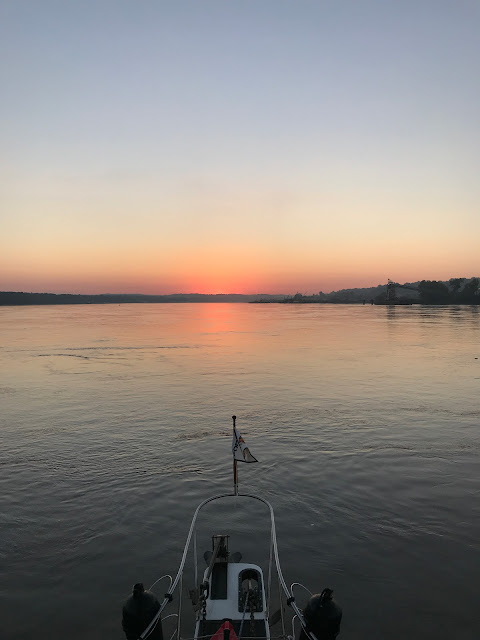 Another Day on Old Man River 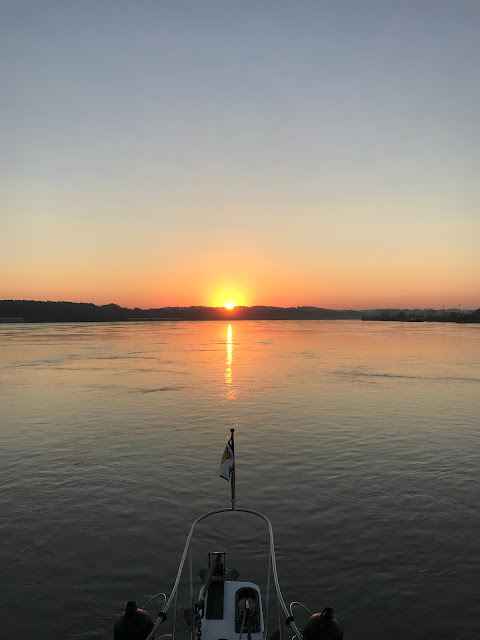 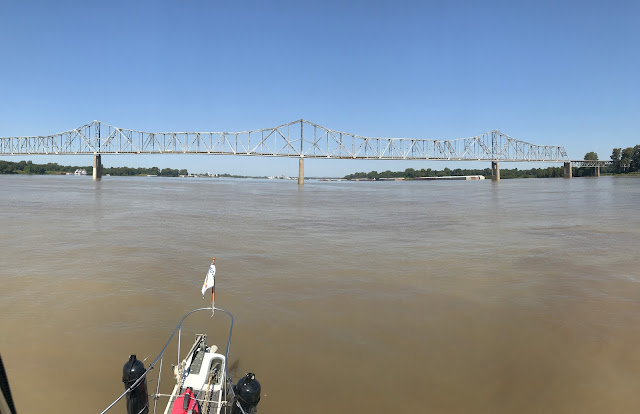 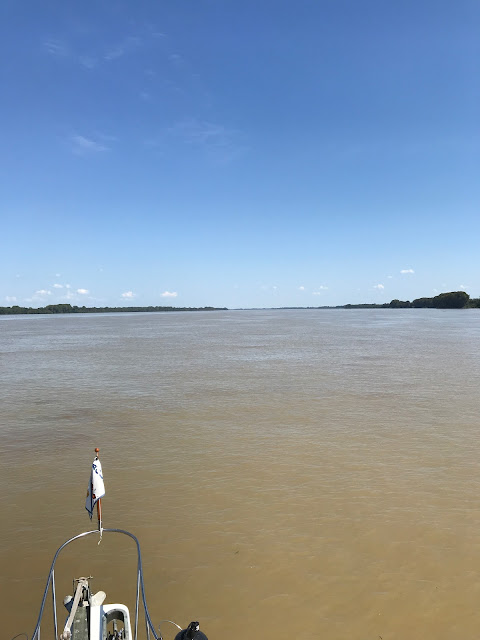 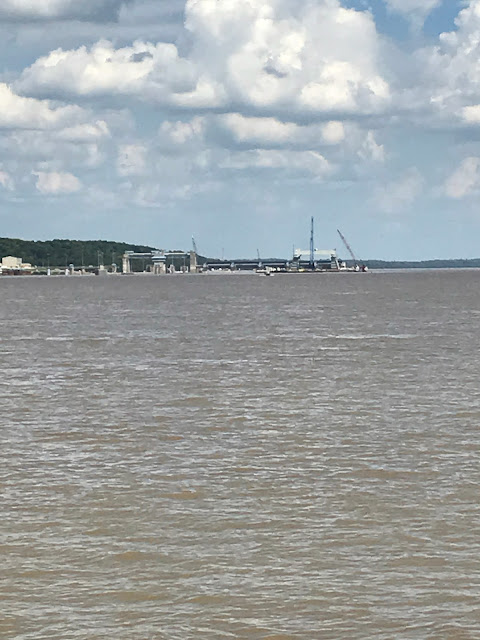 Olmstead Lock and Dam on the Ohio River 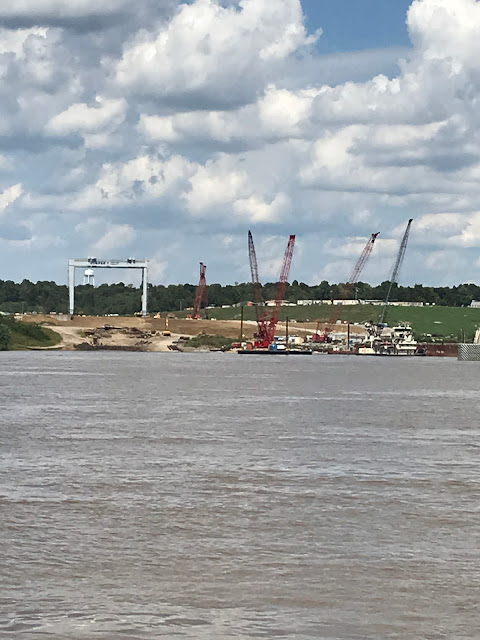 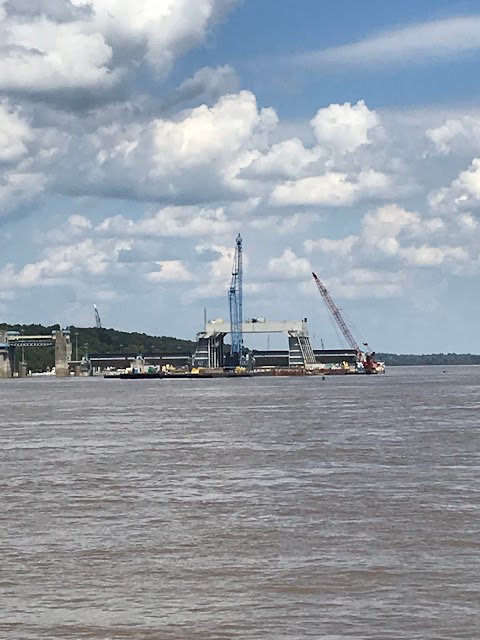 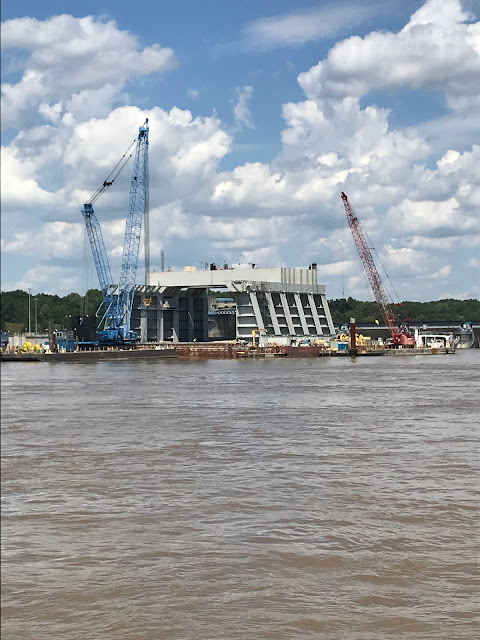 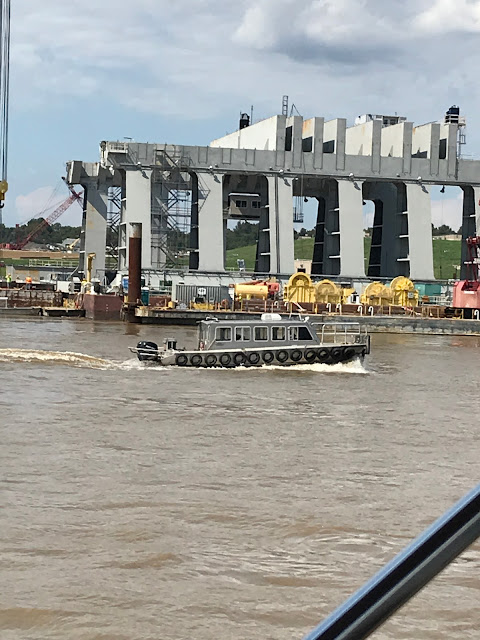 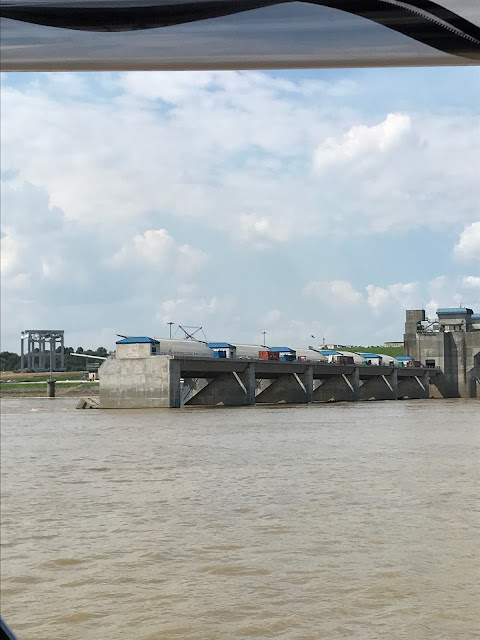 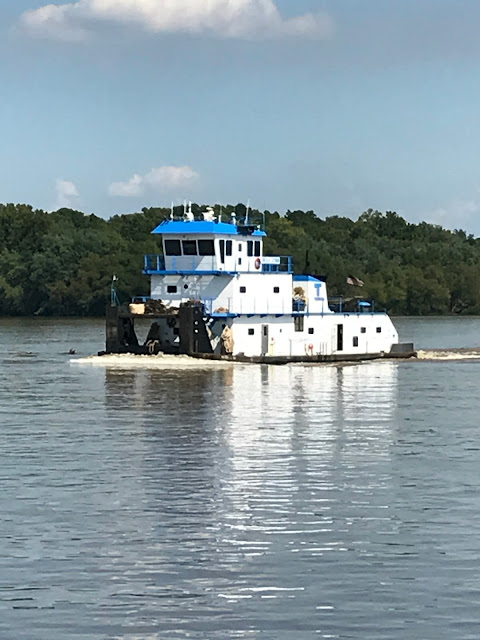 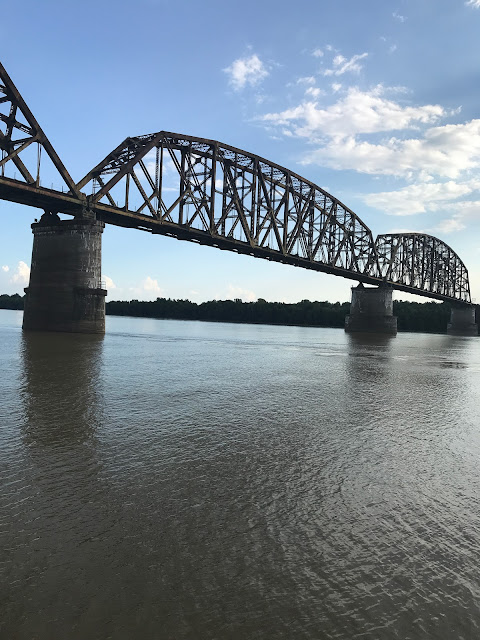 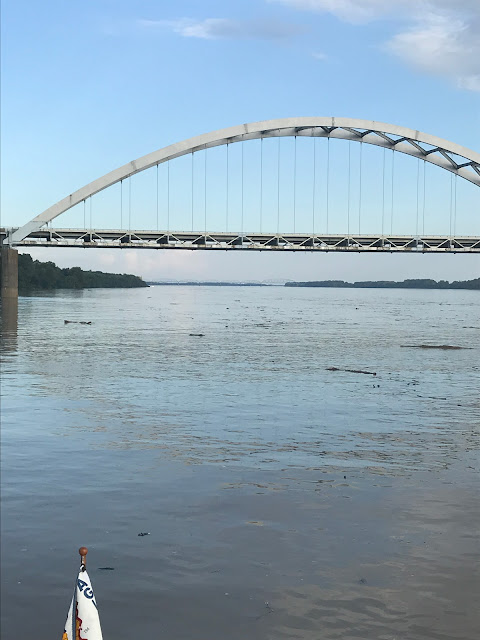 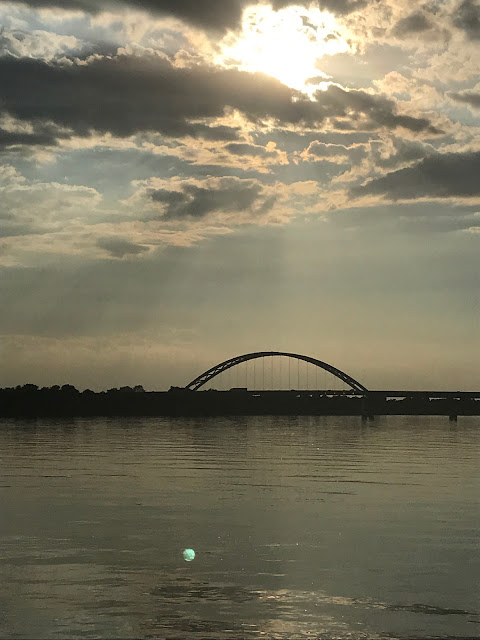 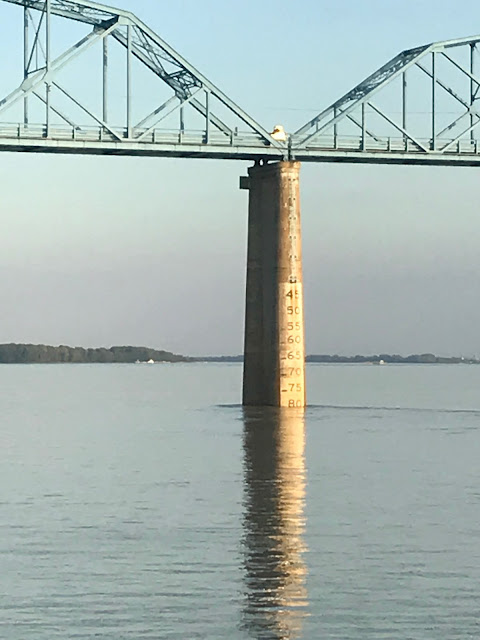 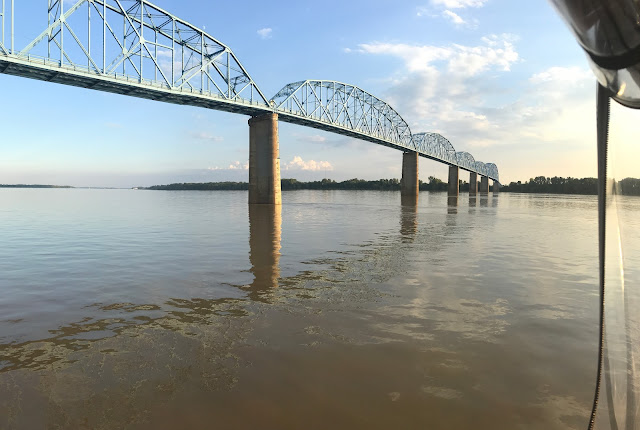 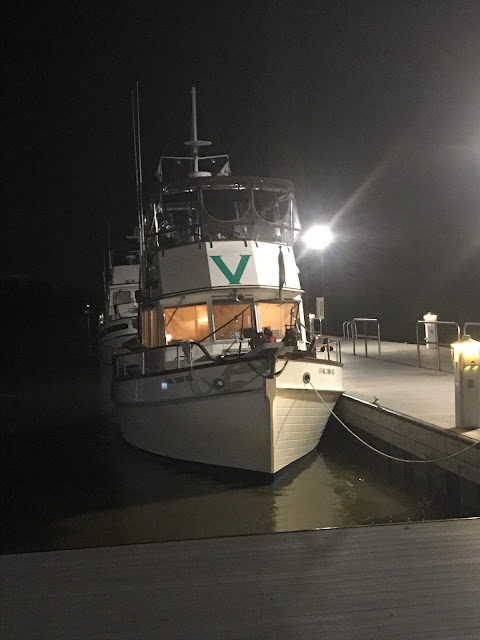 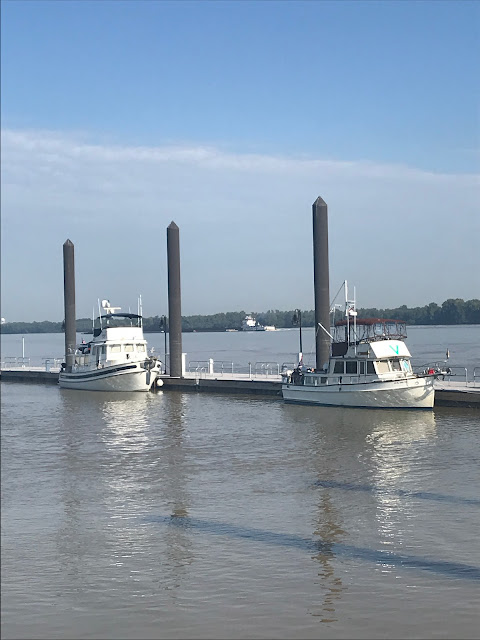 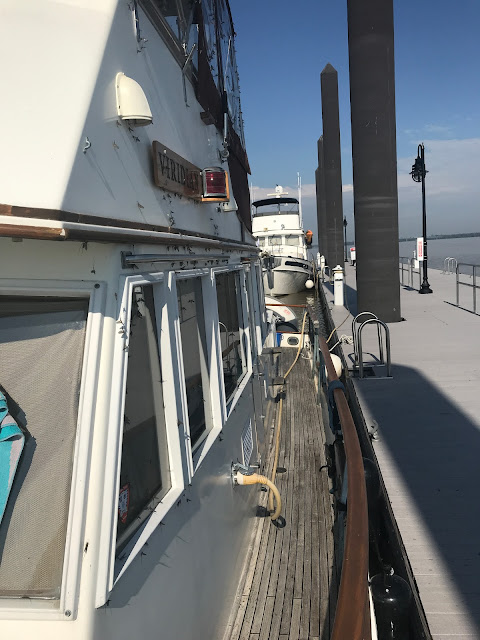 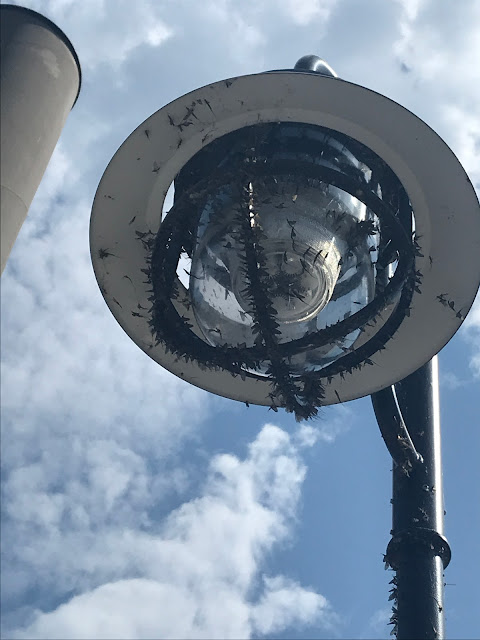 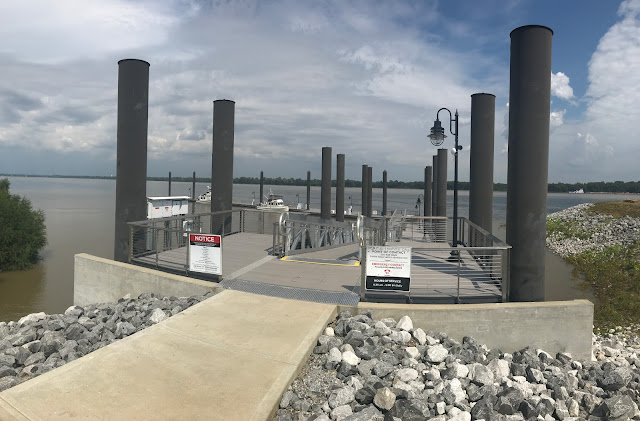 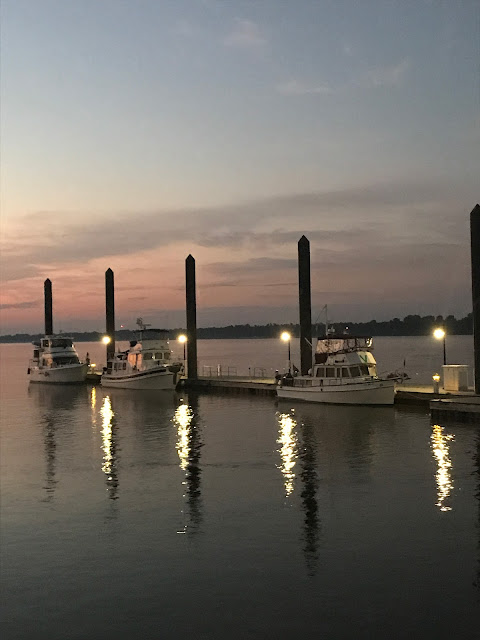 Loopers at Paducah
Posted by Unknown at 8:58 PM