25 September 2016 - It was still dark outside when I came back from the marina restrooms but could see the navigation lights of a huge tug rumbling past the marina.  I came on board and told the Admiral that we may as well not get in a hurry to leave because a tug just went by headed North.  No sooner than the words left my mouth a knock came on Viridian's port hatch.  I opened the door and there stood the pirate Captain with a curved knife clenched between his teeth. (No,  not really!)  He said he had just hung up his cell phone after talking to the Lock Master at John Rankin, our first of three L&D for the day.  He said that there were two tugs down river at Wilkins in line to lock up and head North.  One was already in the lock and was about to start our way.   He said that if we could leave immediately we could slip in between the tugs and work our way North to Pickwick.  He also said that he had to leave now whether we were ready or not.  Fortunately,  I had gotten an early start this morning and was just waiting for first light to depart.  All we had to do was fire up our engine, turn on nav lights,  untie,  and head out to the river.  The pirate Captain asked me to first untie his lines and toss them on board to his mate.  Once he was heading out Viridian and crew followed.  It was still dark but we could just make out the hulk of the big tug pushing a stack of barges coming our way.  Both Viridian and the pirate ship slipped into the channel about a half mile in front of the tug.  We knew that we would have to wait for the tug named "Creek" to lock through but should be able to pass her later.   The plan for the day was to get through the three locks and once on the Pickwick we were on our own.  The pirate ship was faster than Viridian and would take advantage of that speed once through Whitten.

We arrived at Whitten L&D around Noon and Creek was locking up.   The Whitten Lock Master told us to stand by for him to clear Creek and we could slip in and go up as soon as he could cycle back down.  Fortunately, we were stopped in the River below Whitten L&D where the Natchez Parkway crosses the Tenn-Tom.  This bridge provided much appreciated shade from the Noon day sun.  Both vessels, Viridian and the pirate ship, had to compensate for wind and current to stay in the shade, but that was not too difficult.  We held our position for about an hour until the gigantic doors on Whitten slowly opened revealing its massive size.  Whitten was by far the tallest L&D we had entered so far.  It has a vertical lift of 84 feet and was intimidating at first sight.  But like all the other L&D, once inside it all looks pretty much the same.  This was our last L&D on the Tenn-Tom and possibly the last we would see of the pirate ship.  Once we were let loose on the top side of the L&D, the pirate ship went to full cruise speed, about 9 mph, and we watched her slowly pull away from our 7.5 mph pace while being swarmed by a number of pontoon rental boats used by locals and tourists,  until she was just a dot on the backwaters of Whitten Dam.

It was kind of a relief to be headed for the familiar waters the Tennessee River.  Grand Harbor Marina was just beyond the Divide Cut Canal that connects the Tennessee River to the Tombigbee River.  We traveled about 8 miles almost due North until we came into the Cut Canal.  This is probably on of the best examples of one of the greatest achievements for Civil Engineering on the planet.  The "ditch" looked as if it were a work of art.  Both banks were manicured down to the smallest detail and the water depth was 12 feet from bank to bank.  No sooner than we got a half mile into the cut I caught a glimpse of a tug going behind a bend ahead in the distance.  That would be Creek, the tug that churned by us in the early morning hours at Midway.  The pirate boat probably was able to overtake Creek out on the open backwater behind the dam.  We would have to overtake her in the "ditch" or hang back and stay our of her exhaust and wake and bake in the hot air all day.  The "ditch" is fairly straight with plenty of long stretches along the way to pass.  We had 22 miles to go to get into the open waters of Pickwick Lake so we just kept the throttle at cruise speed and caught Creek soon enough.  I radioed the Captain of Creek and requested advice on when and how to pass.  The Captain recommended we wait until we cleared a slight right bend and pass on the "one" on the straightaway. There was plenty of room to do this and the "ditch" was deep up to the banks. Once Viridian got even with the stern of Creek, I radioed the Captain and reported my position.  It took a while but we cleared Creek's bow and slowly started to seek the center of the "ditch" as the tug slowly faded away behind us.   Now we were really home free!  The "ditch" finally opened up into Yellow Creek on the Pickwick backwaters.  Viridian was cruising in one of the most beautiful bodies of water we had seen so far.  We took a turn to port and headed Northwest past Goat Island and snaked our way in the channel past Lee Spry Marine and Boatyard.  The channel necked down as we passed Yellow Creek Island to port.  Once past the Island we swung ENE and we could see our destination ahead on the left bank, Grand Harbor Marina!

We had contacted the marina earlier that morning and made reservations and were given a description of where they wanted us to dock.  Google Maps view of the marina helped orient us with their description of the slip layout.  When we contacted the marina on CH-12 announcing our arrival, we got someone different who was not aware of our previous discussions.  He told us to pull along side the transient dock in front of, you guessed it, The Pirate Ship!  We attempted to do just that but the wind was too strong and we could not approach the dock with confidence and there was no one there to catch us.  The Dock Master told us to come around into the protected area of the marina and pull alongside the dock in front of the marina store.  This worked much better since it was on the windward side of the dock and there was a Looper boat there with someone to catch our lines.

Viridian was secure in a location just a few steps away from the Marina Store and next to a Looper couple who just arrived from the Great Lakes on their way South to complete the Loop.  We walked over to the Pirate Ship to talk with the Captain and crew.  We wanted to thank them for all the help and guidance they shared with us over the last two days.  This is where our paths would part, we were going East on the Tennessee and they were going North to the Great Lakes.  This was the last we would see of the Pirate Ship and its Crew.  We bid them farewell since they were leaving at first light and we were planning on staying an extra day and explore the Shiloh Civil War Battlefield just down the road a piece.  We were a better Captain and crew after sailing with the pirates.  We were fortunate to have met up with them when we did and slide through the 7 locks with their help.  By the way, did I ever mention the name of the Pirate Ship?  You should be able to guess it by now.  Her name was "GOOD FORTUNE"! 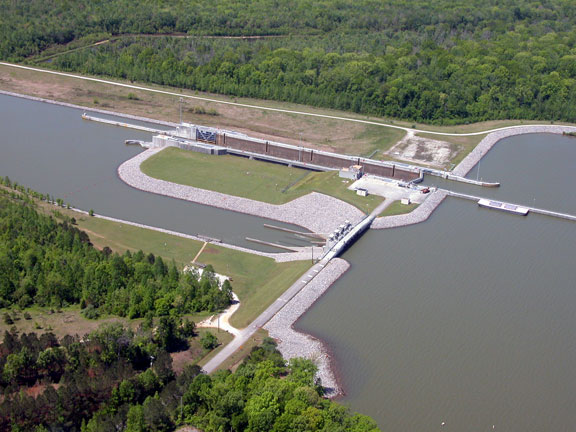 Rankin Lock is named in honor of former Congressman John Rankin of Mississippi, one of the waterway’s earliest champions in the Congress 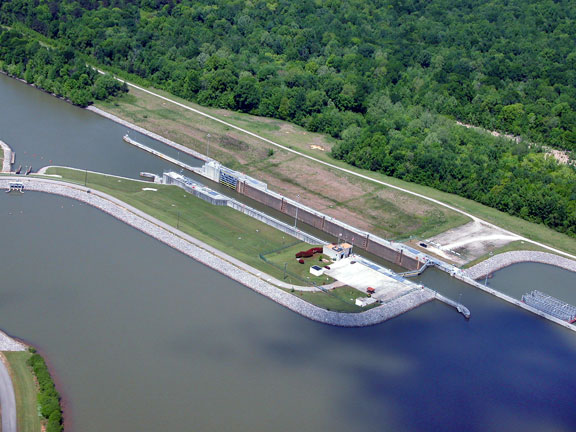 Montgomery Lock is located in northern Itawamba County, Mississippi and named after a former U.S. Representative from Mississippi. 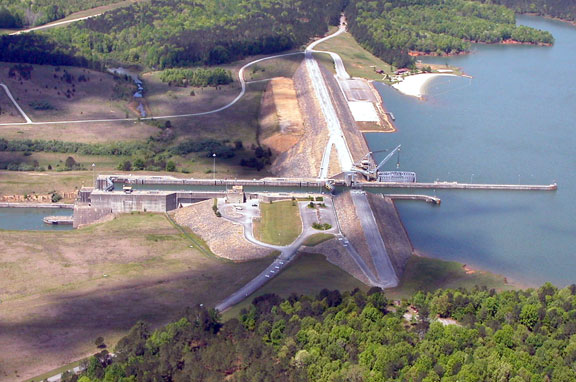 Whitten Lock and Dam is the northernmost lock on the Tenn-Tom. The Lock raises and lowers barges and pleasure boats 84 feet, the difference in the elevation levels of the water above and below  the dam. This is  the fourth highest single lift lock in the nation. The dam forms a 6,600-acre lake that joins the so-called Divide Cut canal, and ultimately connects the Tenn-Tom with the Tennessee River. The structure, named in honor of Jamie Whitten, a former Congressman from Mississippi who served over 50 years in the U.S. House of Representatives, cost $75 million. 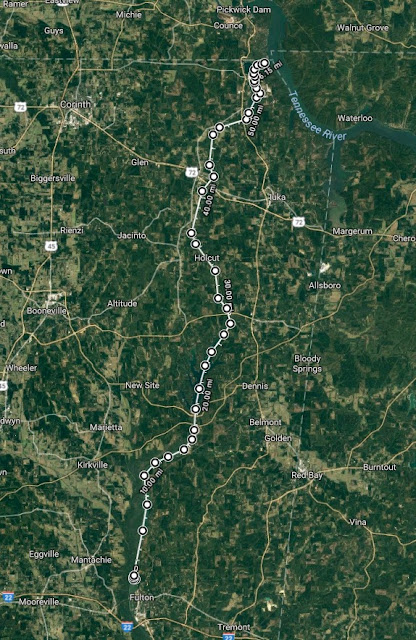 Location of Grand Harbor Marina is at the Juncture of AL,  MS, and TN North of Whitten L&D 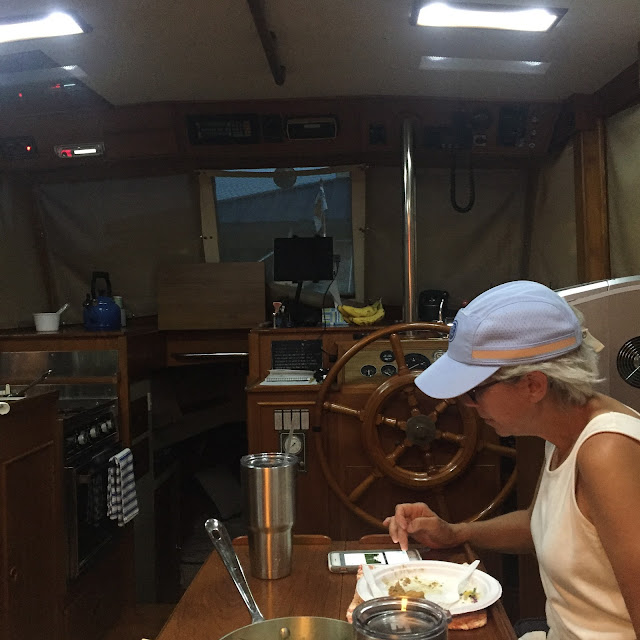 Breakfast on board VIRIDIAN 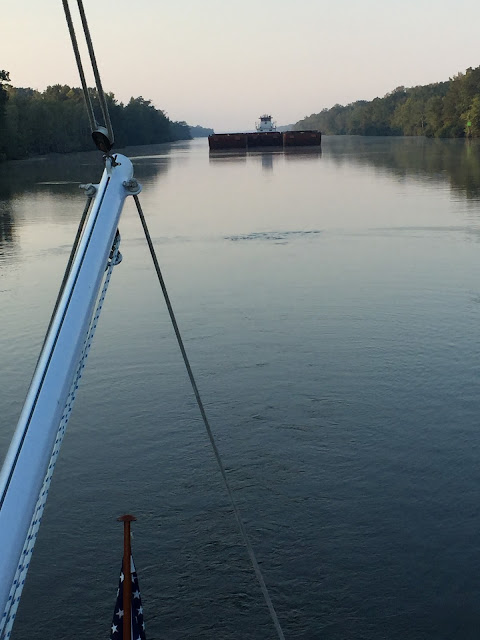 View Looking astern after sliding between tugs after leaving Midway 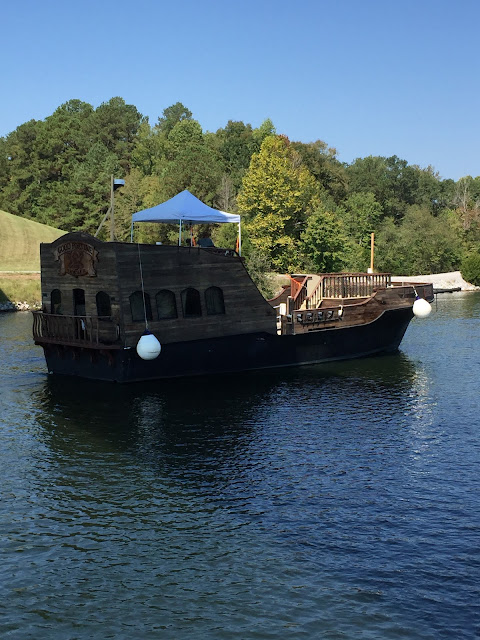 Waiting under the Natchez Trace Bridge with GOOD FORTUNE 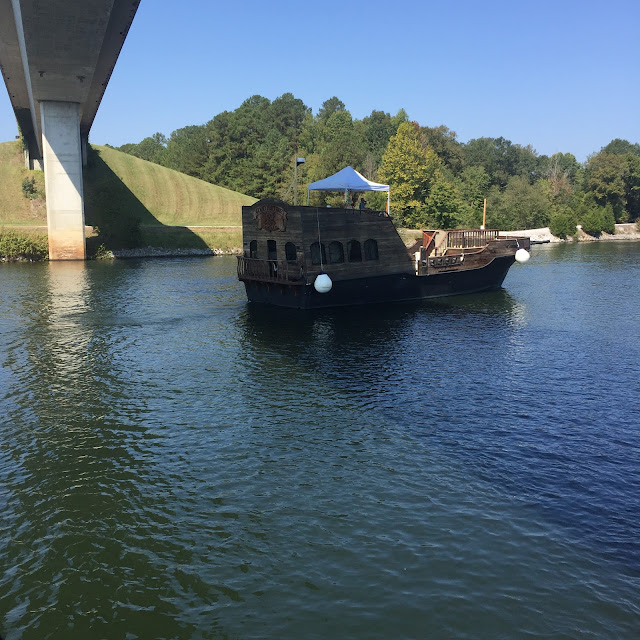 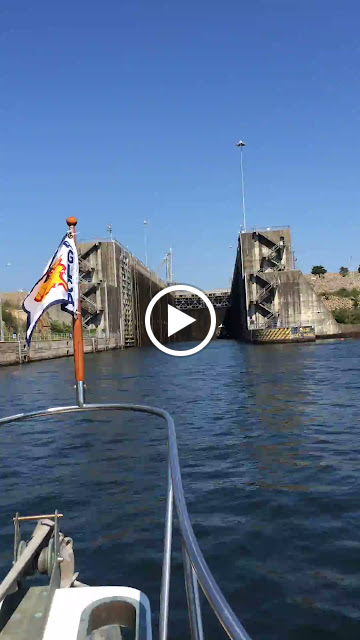 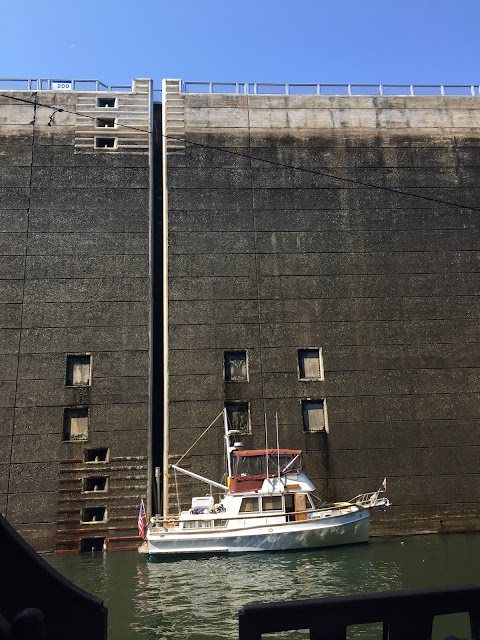 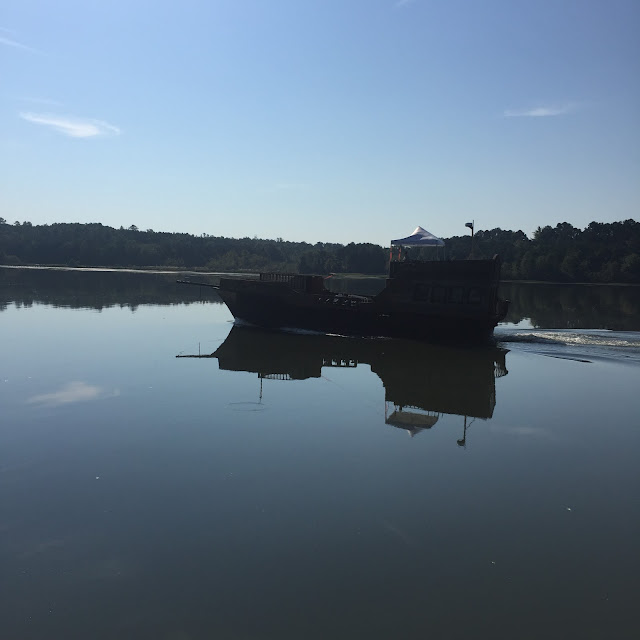 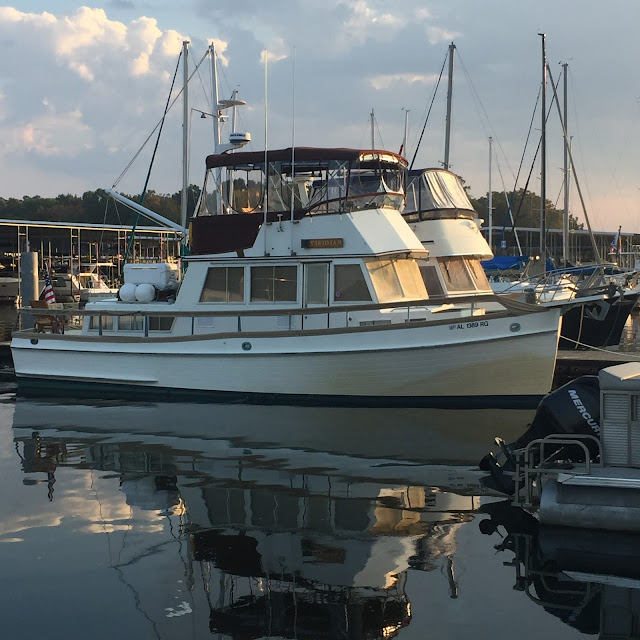 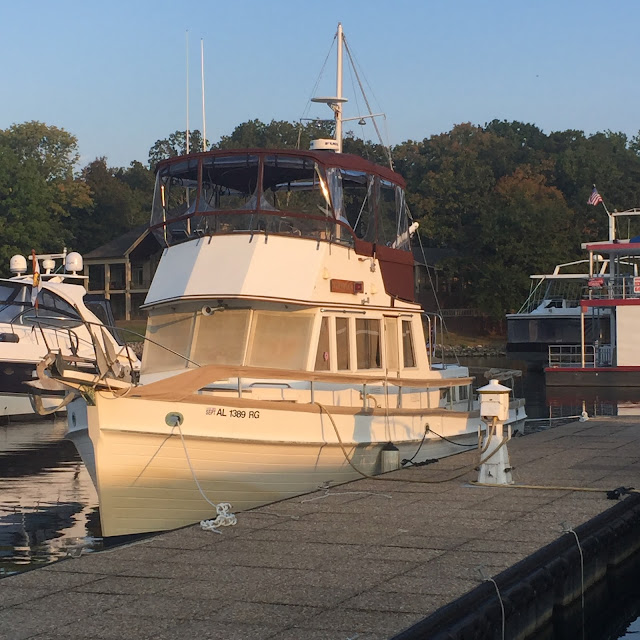 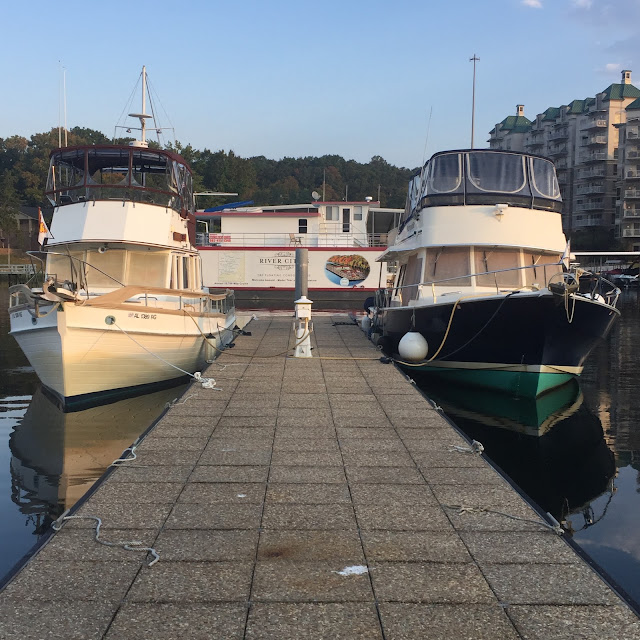 Met Fellow Loopers on Last Quarter of Their Journey 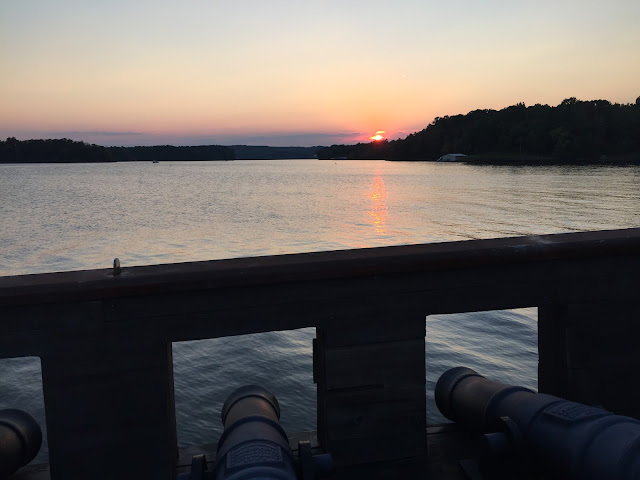 A Sun Set View from the Pirate Ship "GOOD FORTUNE" 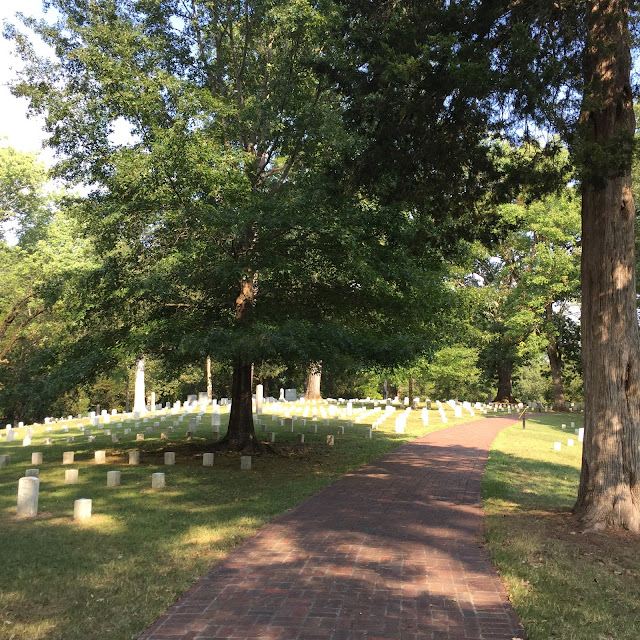 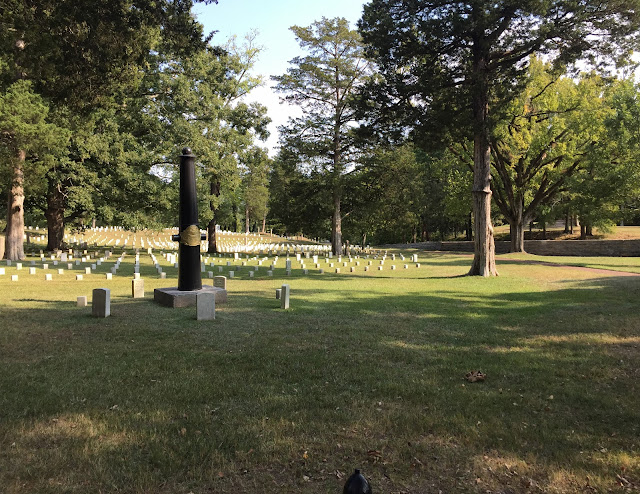 Shiloh Cemetery
Posted by Unknown at 7:00 AM