After checking below deck and plotting our course for the day, we ate breakfast and used a lantern to see as we started bringing in the anchor so we could leave at first light.  As the chain started coming through the fairlead, we could see it was covered in a thick grease-like mud.  This had to be cleaned before stowing it back in the chain locker so we hooked up the handy seawater wash hose under the bow pulpit and started washing the chain.... till the breaker tripped and and the pump motor shut down.  No problem, we will just do this the old fashion way: tie a bucket to a rope and haul up 5 gallons of water at a time and wash off the chain, all 100 feet of it.  This activity lasted until I let go of the rope on one of my throws and the bucket drifted just out of reach of the hook stick.  No problem, Meg had a mop bucket so she tied a rope to it and continued the washing of the chain till the knot she tied came untied and the bucket sank into the dark water, lost forever.  Well, we will just have to haul the rest of the chain in with mud on it and deal with it later.  Viridian's engine was running since we started hauling up the anchor exercise and as I walked aft to climb the steps to the fly bridge, there was my bucket, floating next the the swim platform.  I reached out to get it and we finished washing the chain and left the anchor, filled with mud, hanging just under the water as we started to exit our anchorage.  The sun was not up yet but first light conditions gave us enough to see without the lantern.  Viridian's navigation lights were turned on, the anchor light was turned off and we followed our cookie crumb GPS track back out the way we came in to avoid running aground again.  Well, we were still under tidal influence and had 6 inches less water that when we came in.  The original route in got us stuck again so the Captain had to guess where deeper water might be.  After a few failed attempts to clear the bar we finally managed to slip over as the tide was rising and so was our anxiety.  When the depth sounder showed 8 feet of water under the keel we felt like cheering and hi-5ing but we were two far apart so we just pumped our fists in the air.

The morning air was cool and wispy fingers of thin fog pointed skyward from the Tombigbee River when we cleared the bar back into the main channel.  The sun beams were leaking through the thick trees along the bank and reflecting off the water and thin fog, as Viridian sliced her way Northward toward our next destination, Bobby's Fish Camp just above Coffee Lock & Dam.  This was the last rain we would  see for a very long time.  A record drought gripped the South this Fall and didn't let go till months later.

The Tombigbee winds a torturous path North making many 90 degree turns along the way.  Early in the morning when the sun is still low in the Eastern sky, the glare off the water makes it almost impossible to distinguish color when searching for the red and green channel marker buoys.  Even with expensive polarized sunglasses, everything appears in shades of black and grey.  Even while using binoculars to locate the channel markers color did not show.  It finally dawned on us that this may be one reason for the red nun buoys being shaped like a triangle and the green can buoys being shaped like a cylinder.

We squinted our way along the water route looking for the red-right-return markers and the occasional dead-head log floating butt-first pointed downriver.   At MM 88 we passed the PowerSouth Energy Co-Op and approached the Norfolk Southern Railroad Lift Bridge in Jackson.  The bridge operator raised the section and we passed under and Jackson, AL slowly shrunk away as we droned on Northward towards our destination 57 miles from Three Rivers Lake.  The Jefferson Davis Highway was next at MM 91 and the Tombigbee straightened out for us somewhat all the way to MM 114 just below the Coffee Lock & Dam.  Just before we reached the Jeff Davis bridge the Captain radioed the Coffee Lock Master and notified him of our location and ETA and asked if he could get us through.  The Admiral slipped into her life jacket and went on deck to tie the large round fenders for a starboard tie to the lock bollard.  We were a little anxious since this was our first experience in this type of boat locking through.  We were not sure how our untested bollard loop would work or whether or not it would be difficult to loop on and off the bollard.  The Lock Master was not busy at the time and he had the lock doors open for us to slide right in.   The Captain was instructed to tie up at either the first bollard coming in or the last bollard next to the upstream doors. He said there would be less turbulence at these locations and our boat would not be pushed around as much.  All went well, everything worked smoothly and Viridian and crew rose 342 feet to the deep backwaters behind the dam.  Bobby's Fish Camp could be seen 2 miles up river as we completed a sharp starboard turn once leaving the lock.  A headwind was blowing steady over 10 mph that made stopping alongside the small, single dock a breeze.  An elderly couple on a smaller boat was tied up and watching Viridian approach.  Meg tossed the man the bow line and he cleated it off as Viridian gently lay alongside the dock.  Once our boat was secure the Captain shut down the engine and made sure all was secure.  It was good to have power and turn the a/c on and settle in for the evening.

We walked up to the marina store/restaurant and introduced ourselves to owner Lora Jane McIlwain, Bobby’s daughter.  She runs the place now that Bobby passed away a few years ago.  We had a long conversation and heard some great stories about all the characters that stop by over time.  A hike around the grounds allowed us to stretch our legs and explore the area in this remote location on the Tombigbee River. 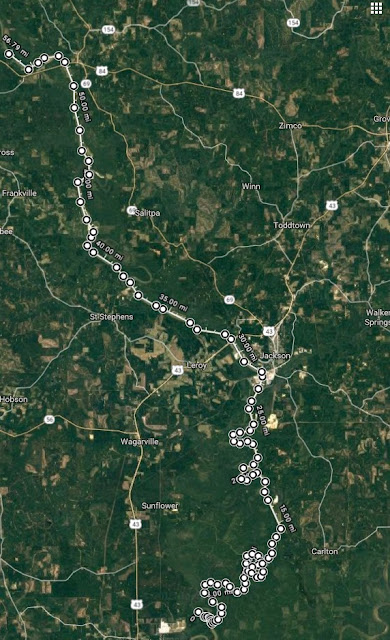 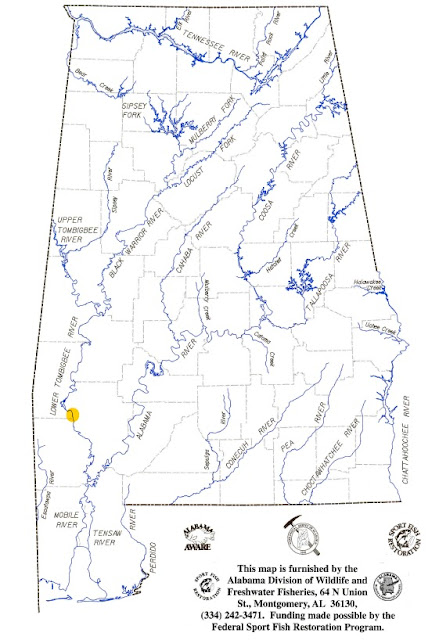 Bobby's Fish Camp is Located at the Yellow Dot 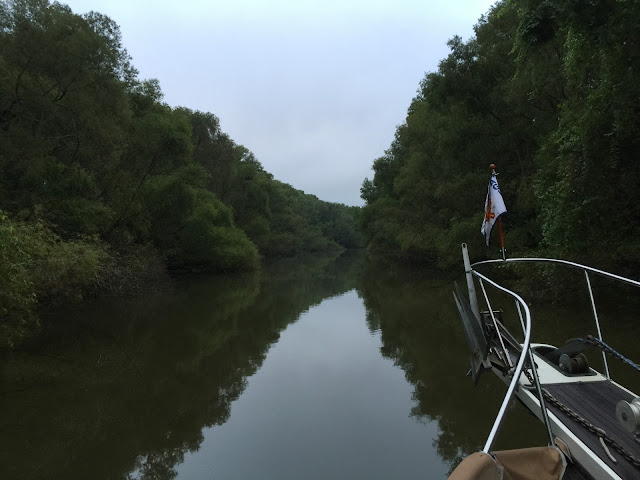 A View Forward as we Departed Three Rivers Lake Anchorage 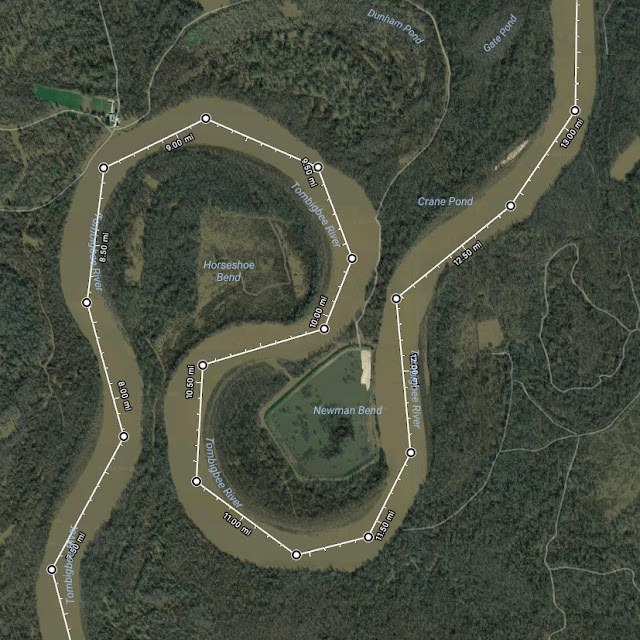 Good Example of the Tombigbee Route 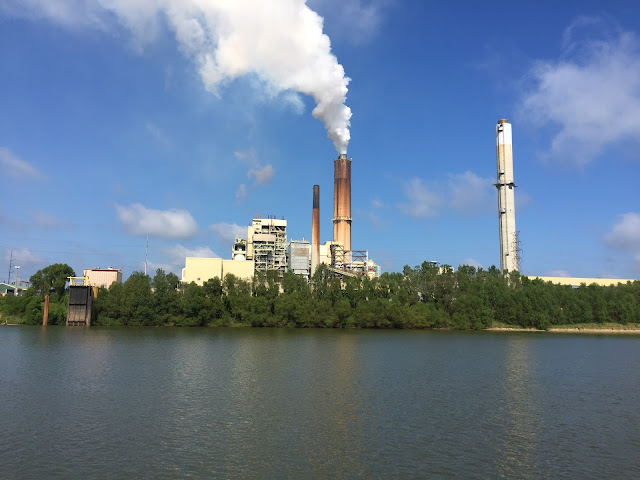 PowerSouth Energy Co-Op - In 1941, PowerSouth was formed by 11 cooperatives to generate and sell electricity. First known as Alabama Electric Cooperative, the name was changed to PowerSouth Energy Cooperative in 2008 to better reflect the cooperative's geographical service territory and to position the company for future growth opportunities. Today, as one of 62 G&T cooperatives in the United States, PowerSouth is a trusted energy provider for the distribution members, who serve end-users in 39 Alabama and 10 Florida counties. (ref: PS web sight) 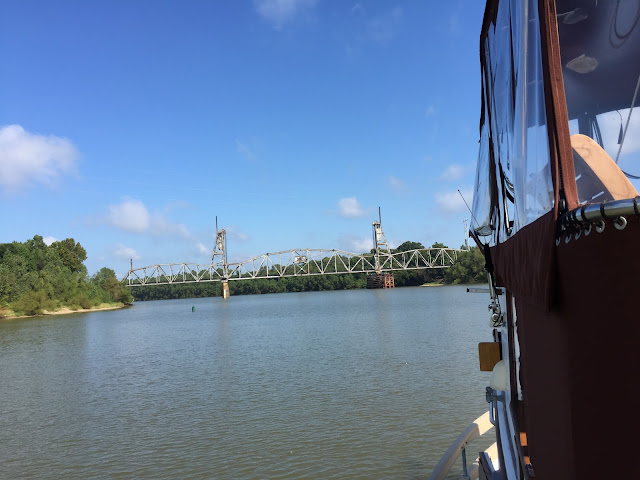 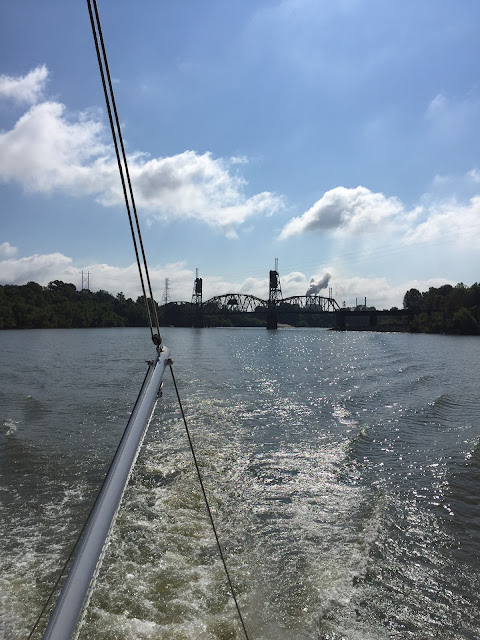 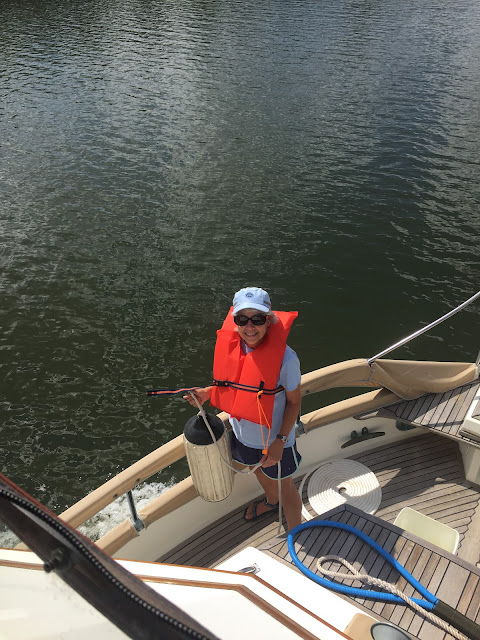 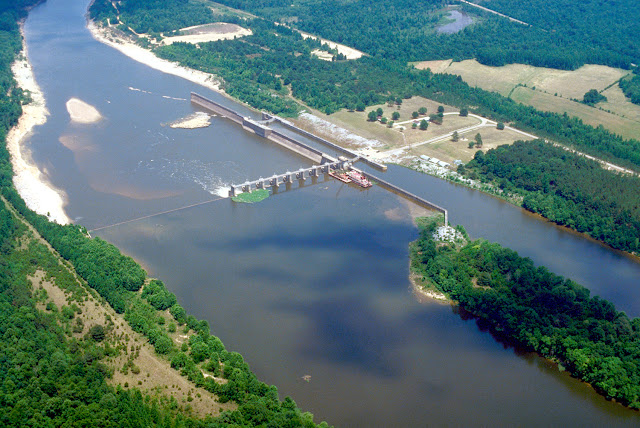 Coffeeville Lock and Dam are located on the Tombigbee River in Choctaw County, Alabama near the town of Coffeeville operated by the US Army Corps of Engineers.  Construction on the lock began in 1956 and while the lock was operational in 1960, all works were not completed until 1965. They were originally known as Jackson Lock and Dam.  As of December 2013, efforts are underway to install a 10 MW hydroelectric power plant on the dam. (Ref:wickipedia) 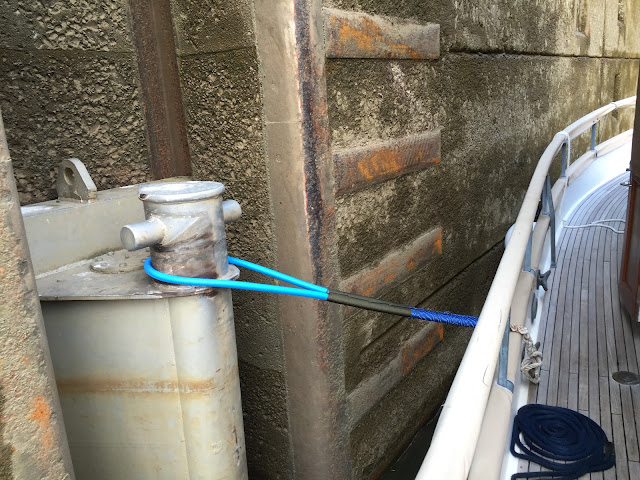 VIRIDIAN made fast to the Bollard inside the Coffee Lock 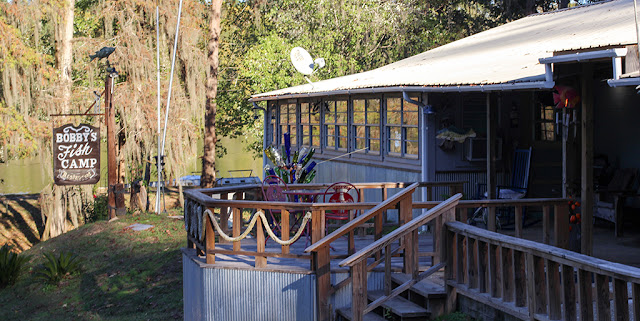 Bobby Dahlberg’s Fish Camp has been in this spot for almost 60 years. It is so tucked away that folks just a county or two over don’t know it’s there, while others as far away as Canada never miss a chance to stop in and fill up on fried catfish.  It’s the river that brings the people from out of state and out of the country; much of the fish camp’s business arrives by boat.
Owner Lora Jane McIlwain, Bobby’s daughter, explains. “Among people who travel the river, my dad’s place is known over the world,” she says. “We’ve had visitors from Germany, Spain, Sweden, Hawaii, Canada, Chicago and more.” McIlwain keeps a book for guests to sign, and it’s full of names from places many, many miles away from rural Alabama.  It has fuel, cabins to rent, water and electricity hookups on the dock and wi-fi. 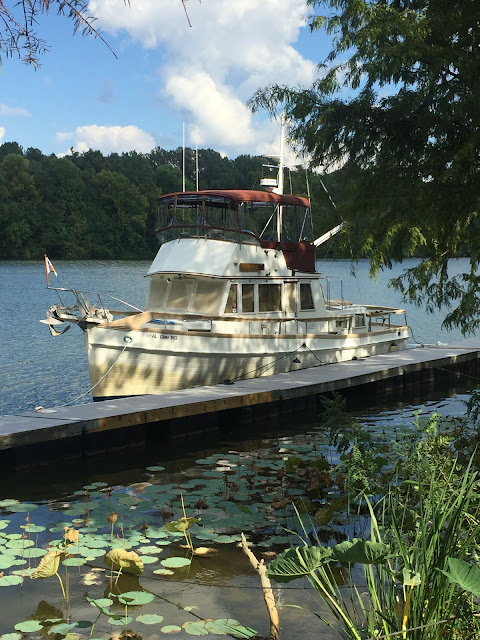 Tied to the small dock at Bobby's Fish Camp 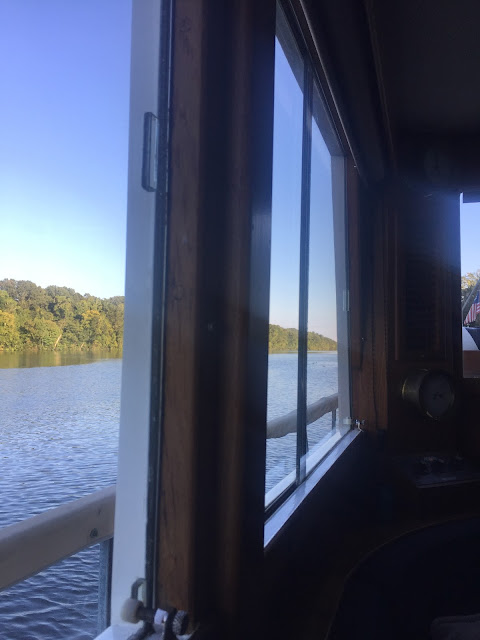 A View from the Solon Looking Down River 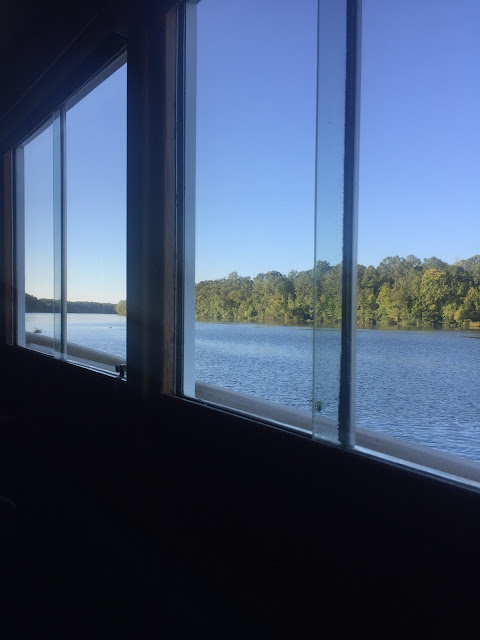 A View from the Solon Looking Up River 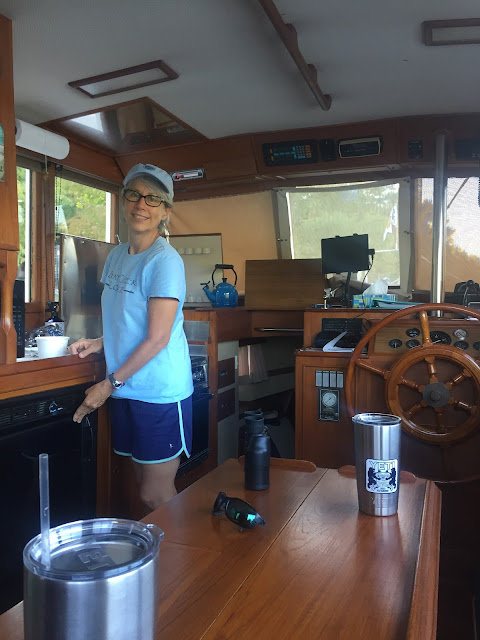 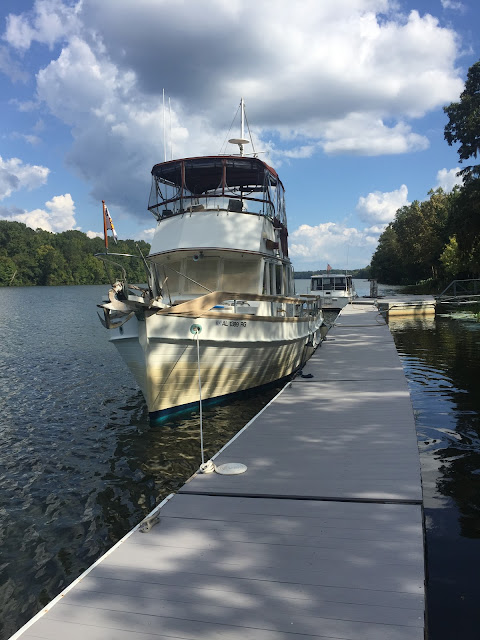 Viridian  at Bobby's Fish Camp
Posted by Unknown at 7:00 AM