Every morning since we left St. Petersburg, FL,  the Captain performed the same inspections without fail on Viridian .  He gets up at 4:30 AM, careful not to disturb the sleeping Admiral, closes the doors to the berth, turns on the lights in the galley and lights the  3 eyed galley stove.  Water is poured from one of several gallon jugs we keep on board for drinking/cooking.  While the water is coming to a boil he cracks the hatch to the engine compartment and switches on the lights to illuminate the below-deck machinery.   He checks all fluid levels for both the main engine and the generator.  Next the fuel sight glass tubes valves are opened and fuel levels noted in both port and starboard tanks (then closed again).  Then,  each fuel filter is inspected for signs of dirt/water for both engines.  Next, with flashlight in hand must duck walk and belly crawl over sharp hose clamps and battery boxes to inspect the bilge for any signs of excess water or oil leaks from the various sources.  All water hoses are inspected as well as electrical for any obvious issues.  Lastly, the shift/throttle cables are inspected to make sure they are in proper working condition.  Once everything passes inspections he closes the three hatches to the engine room and takes the boiling teapot of fresh water off the stove.  Two cups of coffee are made, one is taken to the Admiral who is now stirring around in the berth, and the other is consumed by the Captain while he updates the ship's log and plots a course for the day's destination.  By the time this is all done the multi-talented galley chef has prepared a breakfast fit for a hungry Captain and crew.   This is how each day begins on board Viridian .  When the time comes to start the engine, the Captain uses a check list developed by his brother, Richard, while crewing in St. Petersburg.  (One of Richard's former occupations was an aircraft airframe and power plant mechanic/technician.  He developed a very thorough start-up procedure for Viridian and the Captain has used it ever since).

As the Captain was making his rounds on deck he noticed a pontoon boat two slips over that had three unshaven men who appeared to have been sleeping rough the last several days.  They were in a huddle discussing some important matter so naturally I wondered over to their area and eventually introduced myself.  It turns out the three men had launched their pontoon boat somewhere around Paducah, Kentucky and were on their way South to Mobile.  Once there, their wives were to pick them up and carry them back home to Ky.  When I finished picking their brains, they picked mine.  It is good to get a recent situational awareness brief about where you are going so it was a win/win for both Captains.  I can appreciate a trip like the one they were on.  I often dreamed of doing the very same thing.  Glad I waited and got a boat that had a more homelike feeling though.  We quickly exchanged emails as we all had itchy feet about getting back out on the water.

Viridian was fired up and the multi-talented First Mate unplugged the 50A power cable (otherwise known as the "yellow dock line", untied all the mooring lines and brought all the fenders on board to avoid ripping them off on the dock hardware.  Viridian backed slowly into the mirror calm waters of Kingfisher Marina and with a few burst of bow thruster she was pointed into the departure channel, Viridian was shifted into forward and with a satisfying bump, we eased out of the marina and back in to the Tenn-Tom River and headed for our destination.

Our cruise to Upper Cooks Cut-Off anchorage would be about 62 miles and require locking through the Howell Heflin Lock at MM 266.  We passed under the I-20/59 bridge at MM 239 and cruised within 3 miles of the Heflin Lock where we called the Lock Master on CH-16 by saying, "Howell Heflin Lock,  Howell Heflin Lock, Howell Heflin Lock, this is the vessel Viridian ."  The Lock Master would respond by saying, "Heflin Lock,  switch to CH-12".  I would respond by saying, "Roger, CH-12", and the multi-tasking radio officer would hand me our other radio, a mobile marine hand held,  already tuned to CH-12.  I would say, "This is the upbound vessel Viridian , 24 minutes out.  Can you get us through?"  The Lock Master would respond, (sometimes minutes later), and tell us what the situation was and if there was going to be a delay due to commercial traffic or not.  We would continue on at 6.5 kts to find the gates open and the green light on.  All we had to do was enter the lock and maneuver Viridian to the inner most bollard and tie up.  Once tied, the Captain would radio the Lock Master and say, "Viridian is secure and ready to rise".  The Lock Master would respond, "Roger", at which point the gigantic steel gates would slowly moan closed.  Not long after, strange noises could be heard deep within the lock and the water started stirring as Viridian is lifted skyward at a rate of inches per second.  At the top of the lock we would wait for a spell and then see the gates ahead of us start to creep open.  We waited, engine idling, for the LOUD blast from the lock horn situated too close the the gate.  Once we crawled back into our skins, the multi-tasking First Mate released our homemade Lock Loop and said to the Captain, " You have her now, Captain".  At that point I radio the Lock Master on CH-12 and say, "Heflin Lock, Viridian is free and is exiting the lock.  Thank you for your help".  The Lock Master responds saying, "Roger Viridian .  Have a nice day".  I respond by saying, "Viridian".  This is pretty much the dialog along the Tenn-Tom Waterway with the numerous Lock Masters.  We were told to remember that the Lock Master was BOSS.  If we kept that in mind it would make our trip a lot more pleasant.

After exiting Heflin Lock Viridian headed for an "oxbow lake" called Upper Cooks Bend Cut-Off.  According to ActiveCaptain, this was a highly recommended anchorage.  We approached the Ox Bow on the port side and followed the navigation recommendations given in the comment section of ActiveCaptain.   We kept to port and slid over the sandbar with a foot to spare.  Once in the oxbow we found a deep and wide channel that slowly bent to the left.  At the point where it turned due South we decided to drop the hook.   We anchored in a wide spot with plenty of swing room and the view was a nice sea wall with several up scale houses situated among the trees.  There was no current or wind that we could detect.  The anchor set on the first attempt, the ship's engine was shut down, the generator was cranked and the air conditioners were turned on full blast.

It didn't take long to cool down the Salon or (Saloon).  The multi-tasking Galley Chef prepared a scrumptious dinner complete with adult beverages and we watched the sun set on a perfectly calm location.  We talked about things like, if we had our dinghy we could..... and such till our eyes got too heavy to stay open. 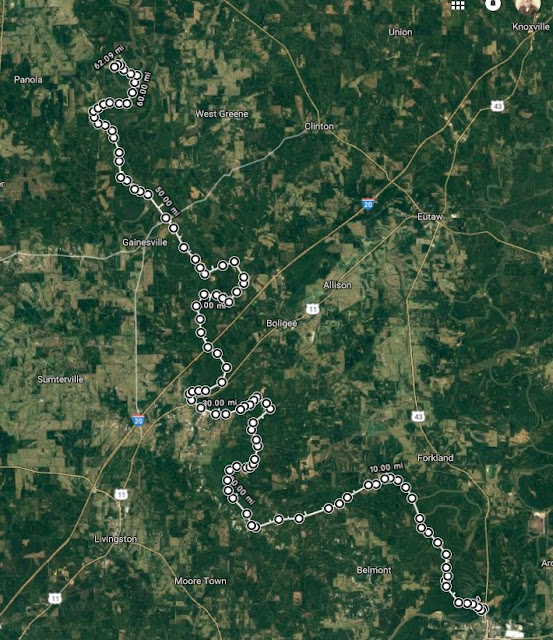 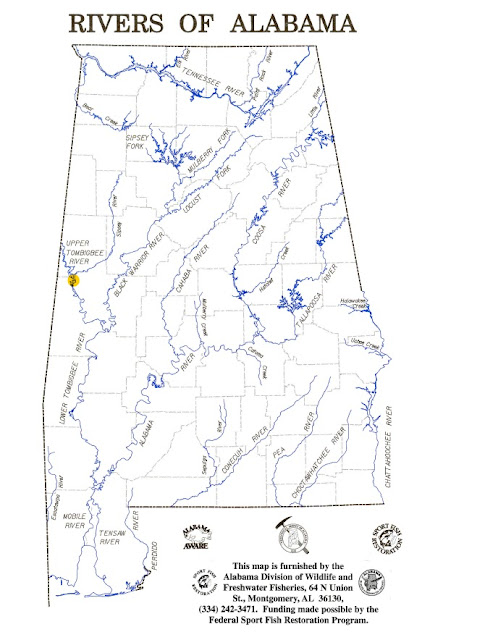 This is the Tenn-Tom Waterway form Demopolis to Corinth MS 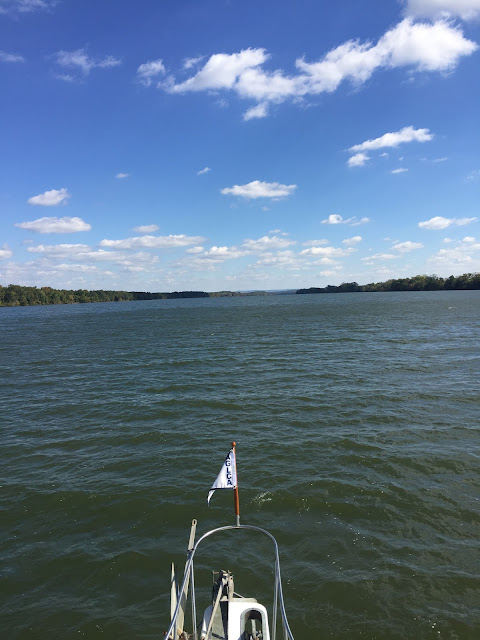 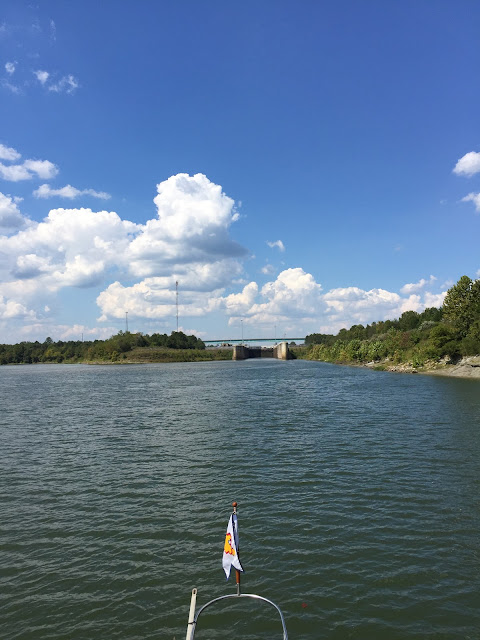 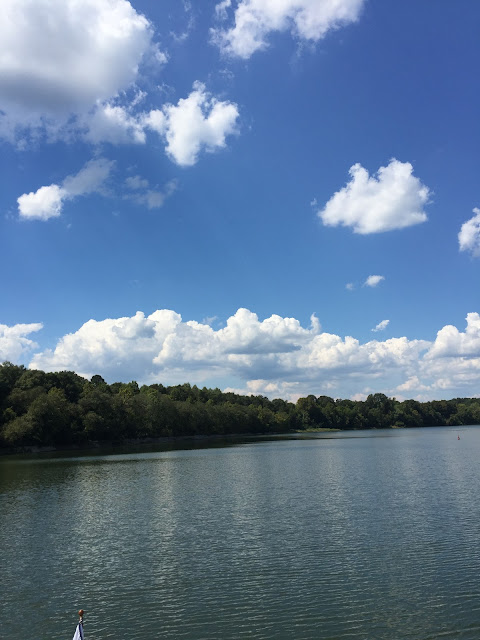 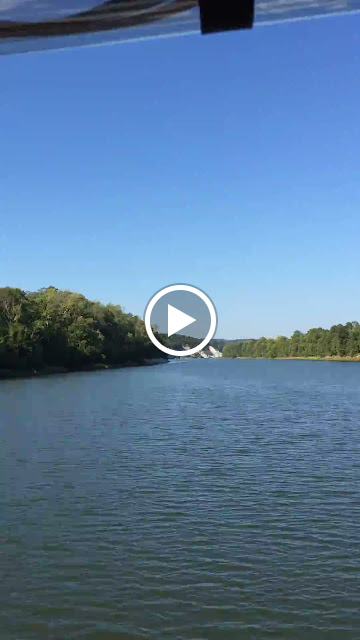 White cliffs along the waterway.  Haven't gotten my videos working yet 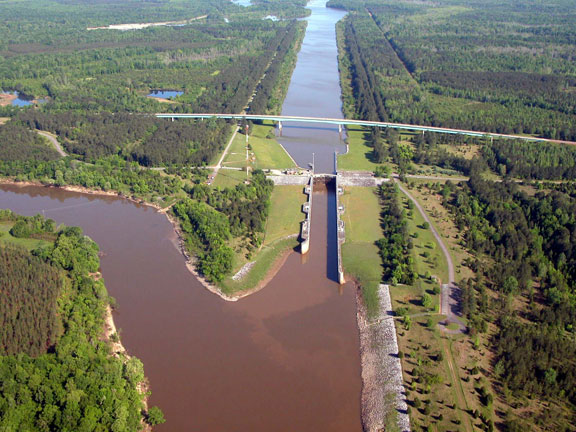 The Heflin Lock and Dam is the southernmost structure on the Tenn-Tom. From here, commercial and recreation vessels reach the connecting Warrior-Tombigbee Waterway some 53 miles away on an improved Tombigbee River and the impoundment created by the Demopolis Lock and Dam. From Demopolis, it is 215 miles to the Gulf of Mexico. Its impoundment, Gainesville Lake, is 40 miles long and covers 6,400 acres. The lock and dam is named in honor of former U.S. Senator, Howell Heflin, of Alabama. (ref: http://business.tenntom.org/using-the-tenn-tom/locks-and-dams/tennessee-tombigbee-waterway-locks/#heflin)
Posted by Unknown at 7:05 AM