The morning of 23 September 2016 started with the usual routine before bringing in the anchor.  The low, rumbling, throaty sound of Viridian's diesel engine idling was occasionally interrupted with a splash/belch caused by cooling water building up in the exhaust system and forced out the tail pipe by back pressure (this is a good thing).  The crew was busy on deck as the sun painted the Eastern sky with pink and lavender hues that gave way to clear blue as the first rays of our new day shot through the trees and broadsided Viridian.  The anchor windless came alive and pulled the chain rode across the bow roller and every link sounded off before disappearing into the chain locker below.   We were so happy to see a perfectly clean anchor come up this time, saving us from the task of washing it down with buckets like we had to do back at Three Rivers Lake anchorage.   The anchor was tied off with a safety rope and Viridian was easing back toward the Tombigbee River to turn North towards our destination of Columbus Marina in Columbus, MS.

Today's cruise would only be 58 miles but we would lock through twice before reaching Columbus.   The first lock, and the last one in Alabama for a while, was the Tom Bevill L&D located just South of AL 86/Brooksville Hwy Bridge.  This was just a little over half way to our destination for the day and the beginning of our climb of the remaining 373 feet to Wheeler lake in North Alabama.   On the other side of Bevill L&D we were in the community of Pickensville, AL for a little while then ran North zig-zagging back and forth across the State Line before turning Northwest into Mississippi.  The River takes a 90 degree turn port at the Eka Chemical Plant and stair steps Northwest to the John C. Stennis L&D after passing under the Illinois Central RR lift bridge.  All along the way we kept hearing the whine of prop driven airplanes but could never locate one in the sky.  Figured it was crop dusters from the way they sounded.  Turned out we were just South of Columbus Air Force Base where pilot training happens daily.

We approached Stennis lock after contacting it 3 miles down river.  The Lock Master informed us that a tug was in the lock and we would be waiting about 30 minutes before he could cycle back to pick us up.  This is typical of what we expected along the Tenn-Tom.  It is unpredictable to a degree as to what delays you would encounter on a given day.  We did not know about ways to plan our departure to minimize tug encounters at the locks.  We did know that in the next two days we had to go through 7 locks!  The Captain needed to find some alternate anchorages in the event we ran out of daylight waiting on tugs.  The only other possibility is that we just happen to run into a little "Good Fortune".

Our marina was just on the other side of the Stennis Lock.  The Captain radioed the Dock Master who talked us in with a warning that it gets a little "skinny" along side the fuel dock.  Well, that would be a fine place to run aground!  Our shallow water warning alarm buzzer went off as we slid over the bar close the the fuel dock, just like he said.  Viridian took a hard starboard turn and eased along side the transient dock where we tied her up, shut her down and pumped her out.  (As a side note, it is customary to tip the dock hands.  We had been doing this since we left St. Petersburg, FL.  It is amazing what a few dollar bills will.)

The marina was full of these large green lily pads.  Care was taken not to let the thrusters ingest one.  Not sure what would happen, but didn't want to find out.  The crew checked out the facilities, located the showers and laundry rooms and asked the marina operator where he would recommend we eat out on the town this evening.  He didn't hesitate and came back with "Huck's Place".

After some light small talk with the staff, the radio inside the marina store crackled alive and the Captain of a Pirate Ship called and requested assistance with docking his 60 foot ship at the marina.  The first mate and I headed back to Viridian to do some laundry, take showers, and didn't think much about what we heard on the radio.  After we finished our chores, we climbed back up to the marina store to get the keys to their free loaner car and head out to Huck's for supper.  Sure enough, there was this 60 foot Pirate ship tied along the outer fuel dock.  It didn't have its mast and rigging, just a blue tarp canopy rig like you get at Wal-Mart lashed down on the poop deck with a Garmin radar mounted on a 2x4 sticking over the top.  The crew consisted of the Captain and one first mate that looked to be in his 70's.  The Captain was probably late 30's but was definitely in command.  The pirates had gotten the better of the two loaner cars (what would you expect) so we were riding in this old mini-van of some make.  Since it was dark we didn't pay much attention to the color, make or model.  As long as it had an air conditioner, brakes and cranked we were good.

Huck's was a cool place to dine.  We definitely over ate and regretted doing it.  But hey, you only go thorough Columbus, MS once so why not.  We climbed into our mini-van and I looked back into the dark street and all appeared clear so I started easing out of our slanted parking place into the street and sensed we had stopped.  I gave it a little more gas and nothing.  Like the parking brake was on or something.  It was something.  We were pushing into the right rear corner of a black SUV that was sitting there behind us waiting for the light to turn.  It was totally invisible.  I said Ahh Shhh and pulled back up to the curb.  We got out and talked to the young lady that we leaned into and took a look at the contact area.  There was no visible dent on her car but the min-van had a dent in the plastic bumper where it protects the left rear corner.  I believe that dent was there already but couldn't to prove it.  The young girl's car had a place where the dirt was wiped off the panel but no dent.  So, we exchanged insurance numbers and all was good.  However, what a way to put a damper on the evening.  We drove back to the marina following our phone GPS and found everyone had gone home for the day.  We boarded Viridian to sleep off Huck's meal and didn't think about the traffic event any more. 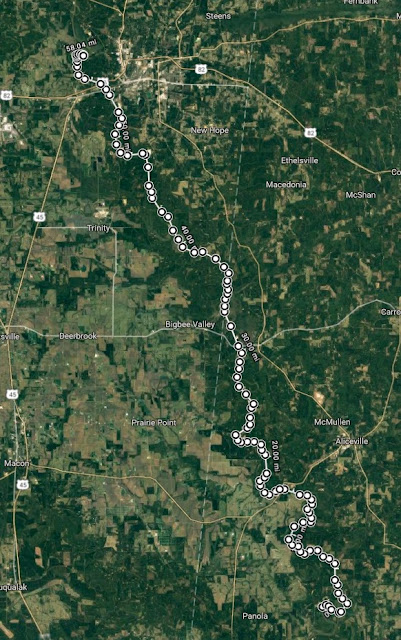 Our Location just North of the Stennis L&D in Columbus, MS 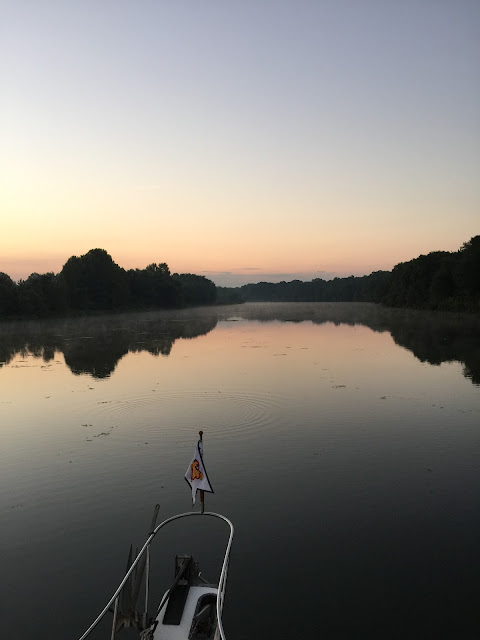 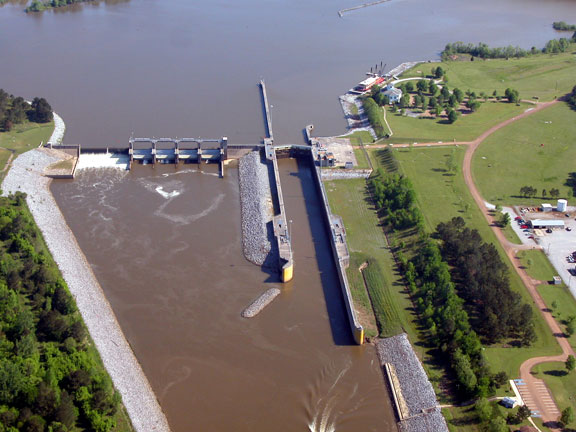 Bevill Dam impounds the 8,300-acre Aliceville Lake. The project cost $45 million. It is named in honor of former Alabama Congressman Tom Bevill. Bevill chaired the congressional committee in the U.S. House of Representatives that approved  the funding for the Tenn-Tom during its construction. Here is located one of the waterway’s most impressive and recognizable sights, the Tom Bevill Visitors’ Center. This majestic replica of a southern antebellum plantation home sits on the waterway near the MV. Montgomery, a retired paddle wheel river work boat. Both are open to the public. (ref:http://business.tenntom.org/using-the-tenn-tom/locks-and-dams/tennessee-tombigbee-waterway-locks/#bevill) 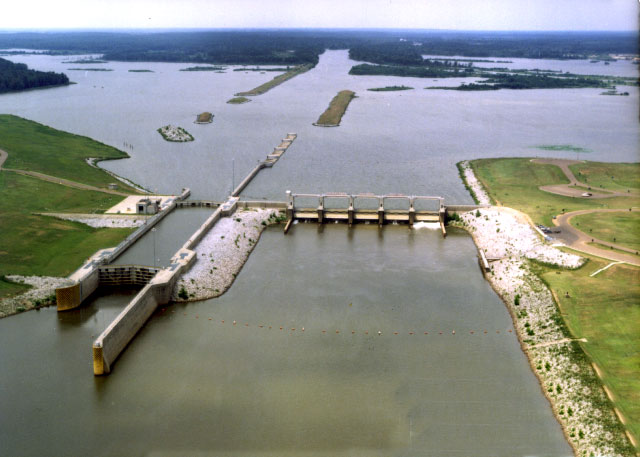 This structure was relocated about four miles from its original site to prevent the flooding and loss of Plymouth Bluff, the site of an early settlement and a unique geological formation. One of the waterway’s two environmental centers is located here. The center, operated by the Mississippi University of Women, offers unique educational opportunities in the earth sciences and is available to the general public. The lock and dam is named in honor of one of Mississippi’s greatest leaders of the 20th century, former U.S. Senator John C. Stennis. Columbus Lake is the largest of the ten impoundments making up the Tenn-Tom, some 23 miles long and over 8,900 acres in size. (ref: http://business.tenntom.org/using-the-tenn-tom/locks-and-dams/tennessee-tombigbee-waterway-locks/#bevill) 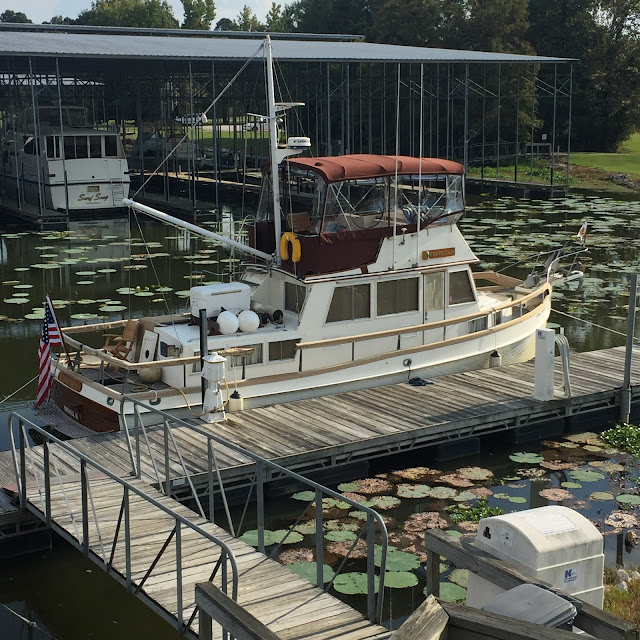 Viridian docked at Columbus Marina in the Lily-Pad Farm 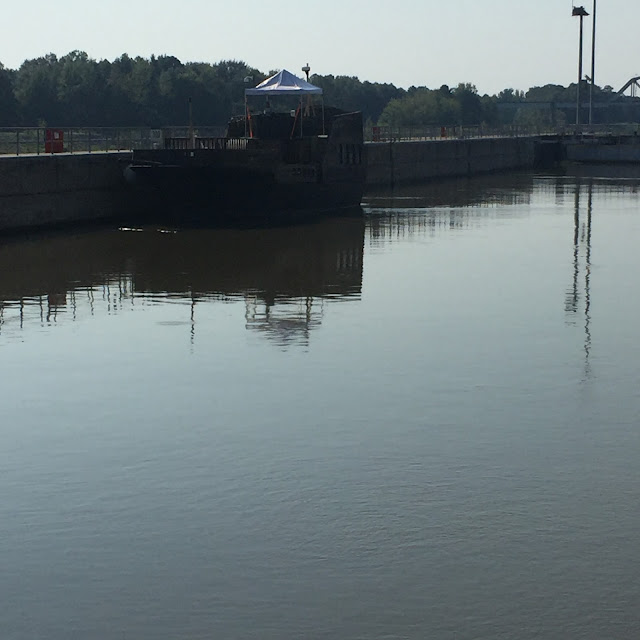 A Bad Picture of the Pirate Ship (note the Wal-Mart canopy, no mast/rigging) 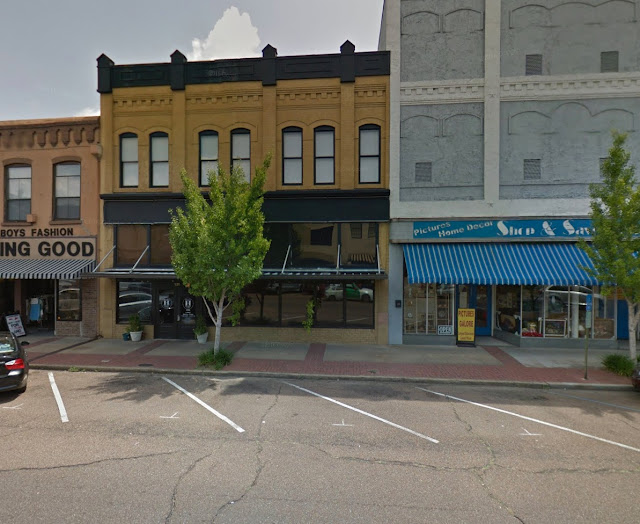 Huck's in Downtown Columbus
Posted by Unknown at 7:00 AM