Isaiah 9:6 For unto us a child is born, unto us a Son is given: and the government shall be upon His shoulder; and His name shall be called Wonderful, Counsellor, The Mighty God, The Everlasting Father, the Prince of Peace.


Dec. 25, 2017
Merry Christmas to our family and friends!  We're hoping your day is filled with joy and Christmas cheer.

Dec. 24, 2017
To start our Christmas Eve day, George and I went to the Key West Baptist Church.  It was a small church with a very welcoming pastor and congregation.  We came home for a quick lunch and then headed out on the hotel shuttle to go into Key West to walk through the city.  We went through a nice art gallery and several shops.  The locals tell us the crowds are  down this year but between Christmas and New Years, there are usually shoulder to shoulder tourists. 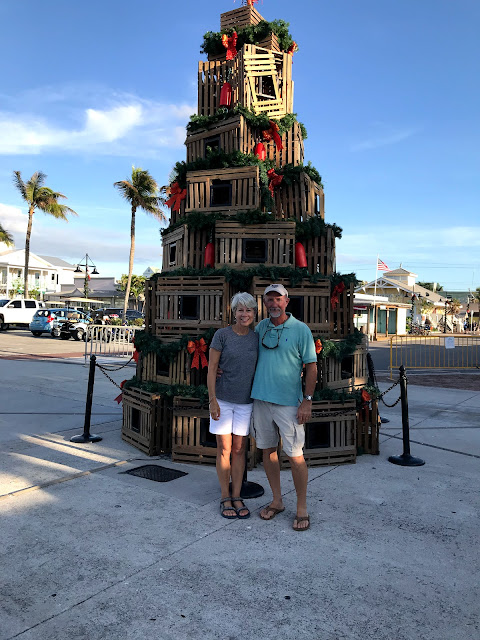 This week we took a trolley tour that stopped at most of the key sights on the island.  Our driver told us some interesting facts.  Key West, even though it has a tropical climate, doesn't get that much rainfall.  We haven't had a drop since we've been here.  And the temperature hardly ever goes above the mid 90's.  Key West is only 2 miles by 4 miles.  Key West is closer to Cuba  than to the nearest Walmart.

We toured the Ernest Hemingway house this week.  The house was built in 1851 and was abandoned for a number of years but was restored by Hemingway and his second wife, Pauline.  It is a beautiful Florida home.  Hemingway had quite a few cats and had one cat, Snowball that had 6 toes.  There are still 6 toed cats living at the home today. 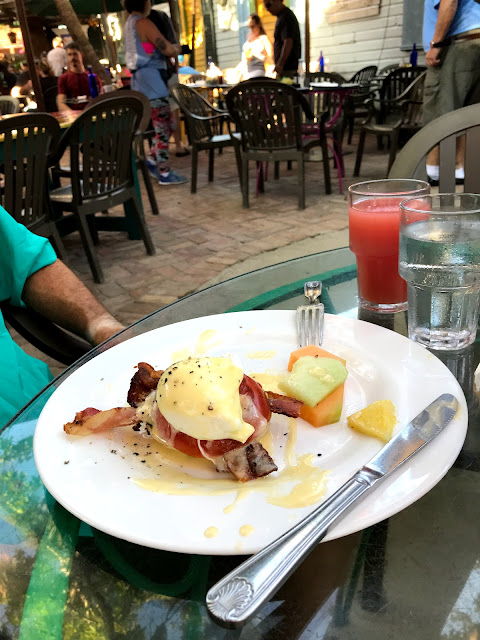 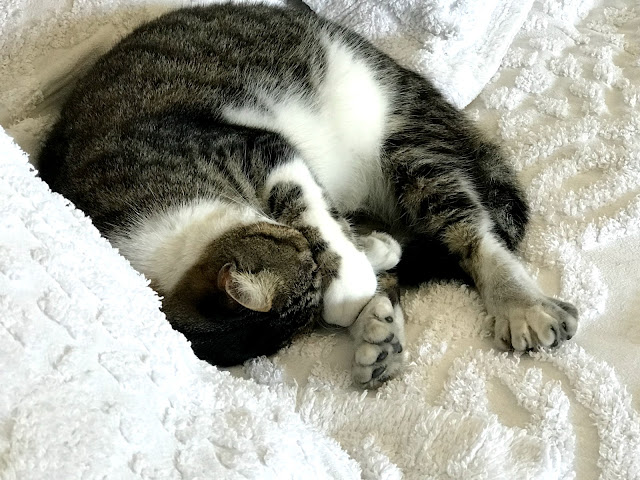 This sleepy kitty must have had a late night because he was sound asleep between the pillows of Hemingway's bed during our tour. 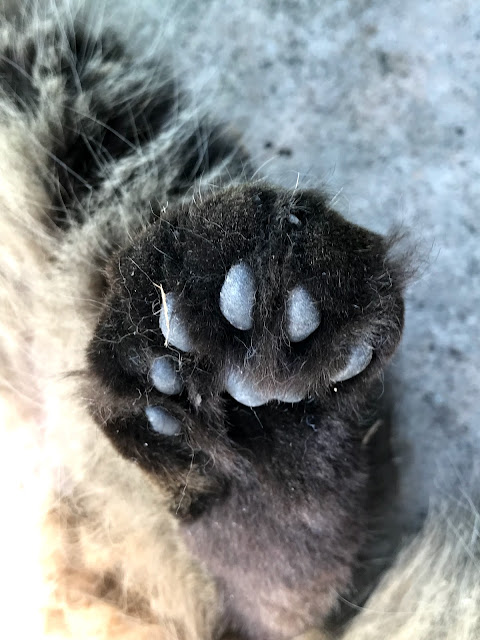 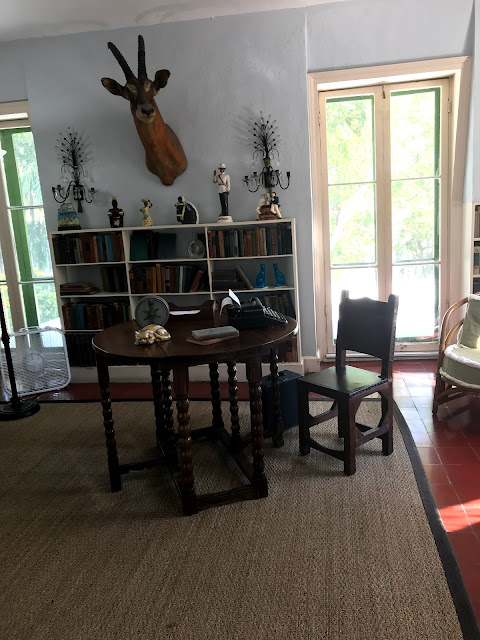 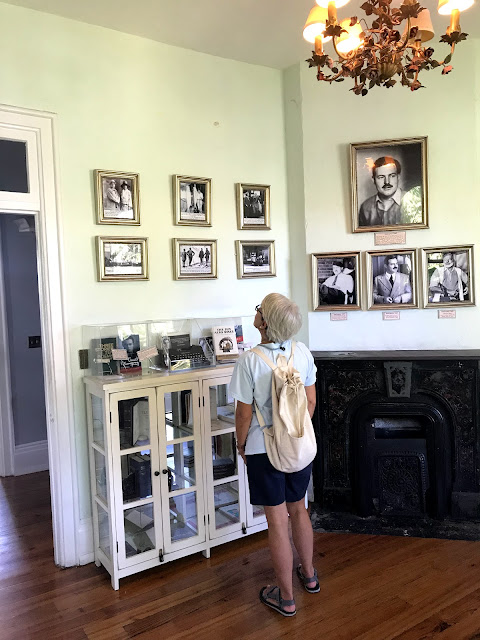 Picture gallery in the Hemingway home

One of the bathrooms in the Hemingway home 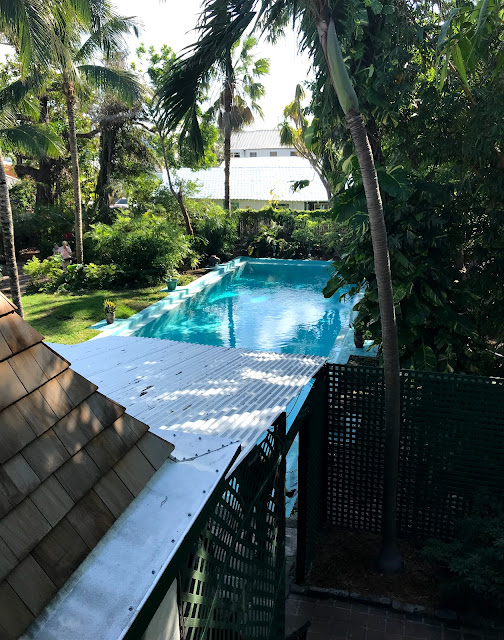 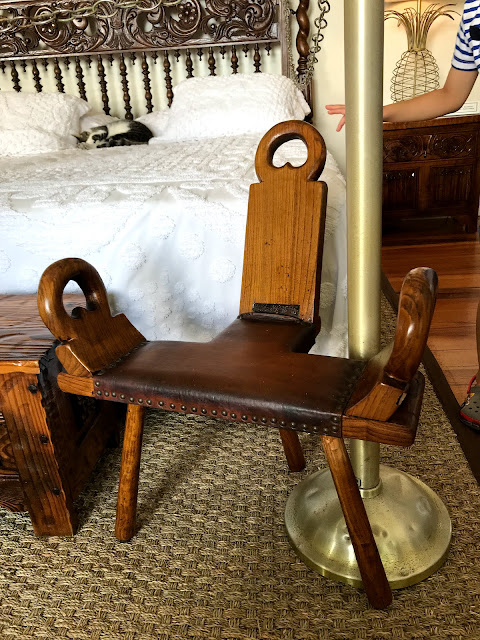 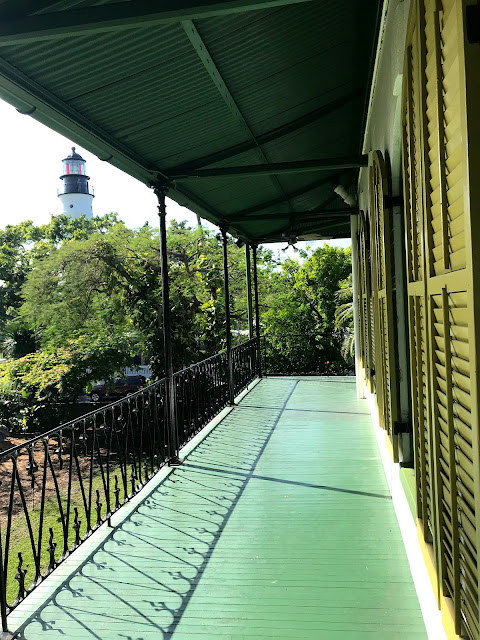 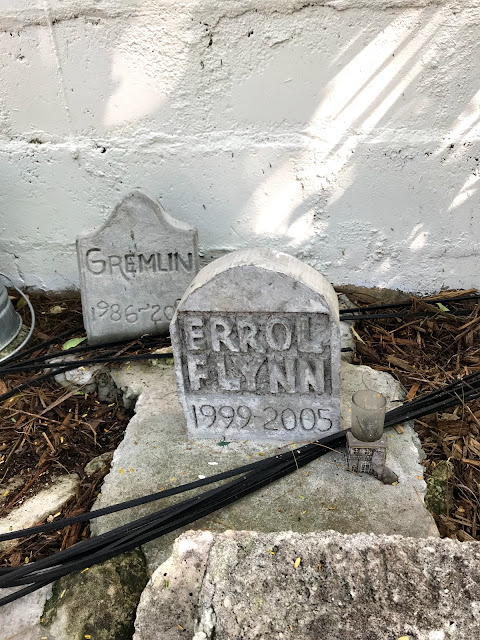 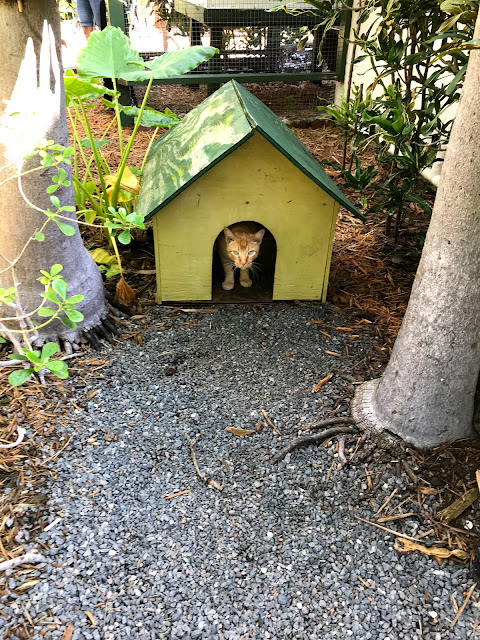 One of the 60+ cats on the Hemingway property 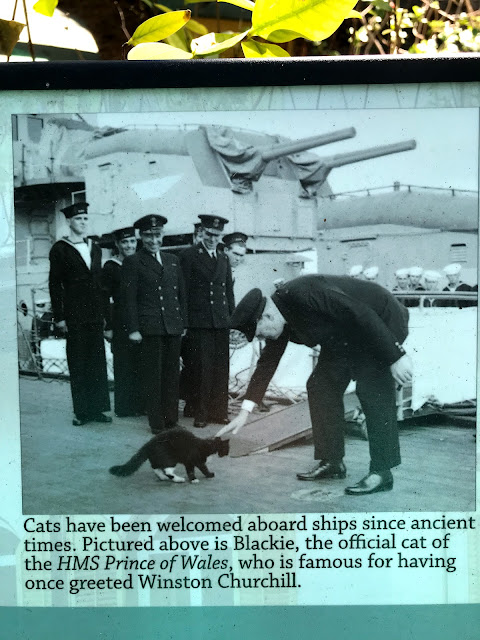 One of the famous cats of Key West 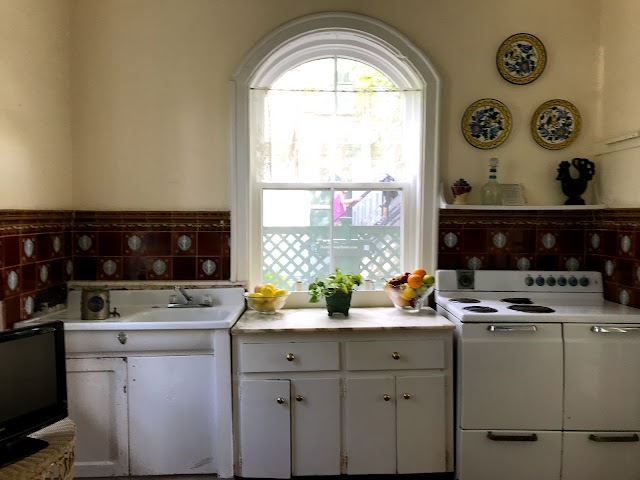 Kitchen in the Hemingway home

After touring the Hemingway home we walked across the street and climbed the Key West Lighthouse. 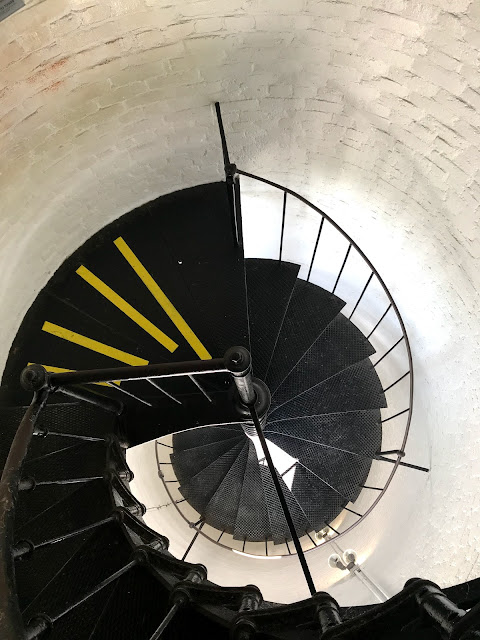 Stairway inside the Key West Lighthouse 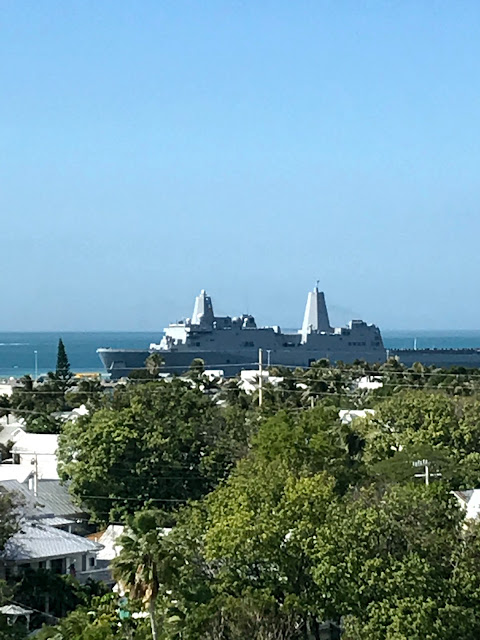 Navy Missile Cruiser as view from the Key West Lighthouse

The Mel Fisher treasure museum was also on the list of must see attractions found only in Key West.  We got the behind the scenes tour where we were able to see people in the painstaking process of recovering ancient relics hauled up from shipwrecks 100s of  years old. 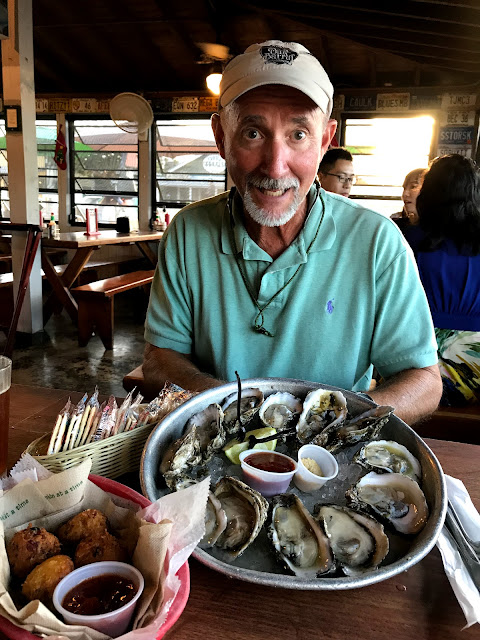 A meal of Oysters and Conch Fritters

We also toured Truman's Little White House in Key West.  After becoming president and going through all the stress that comes with that office, Truman was told by his doctor to get away for a relaxing trip to a warm climate.  He and his wife, Bess, came to Key West and fell in love with the area.  The little white house became a place where he and his staff would work. 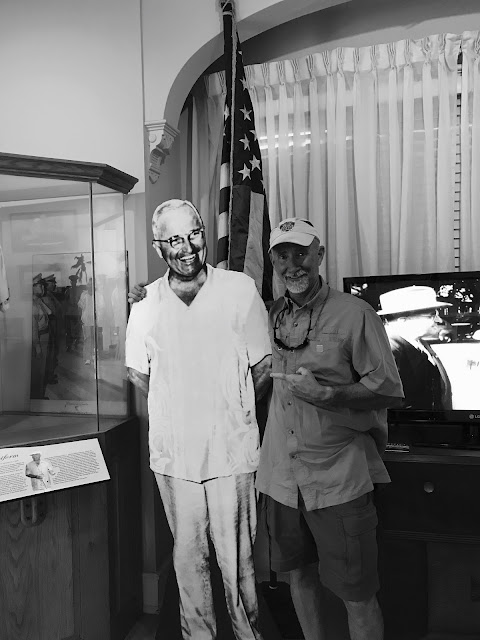 George and I were downtown around sunset one afternoon, so we walked over to Mallory Square to see the entertainers and watch the sunset.  One act we were told not to miss was the Cat Man.  He sets up a mini circus" tiger" act and has his pet house cats jumping from one tall stool to another.  Then they would jump through his arms and for the grand finally one cat jumped through a flaming hoop.  Cat Man wouldn't let us take pictures but wanted us to buy his DVD.

The next act we watched was a young man on a very tall unicycle that juggled things such as knives and flaming sticks! 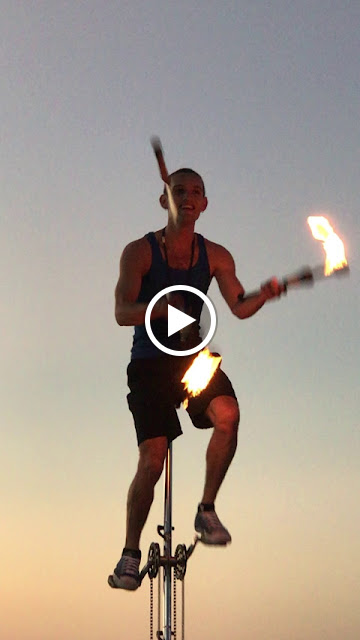 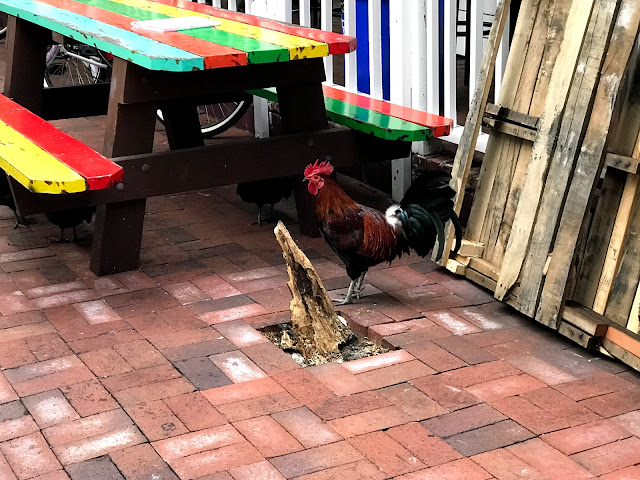 Anything with feathers is protected on the island of Key West.  Stiff penalties for bothering any kind of bird 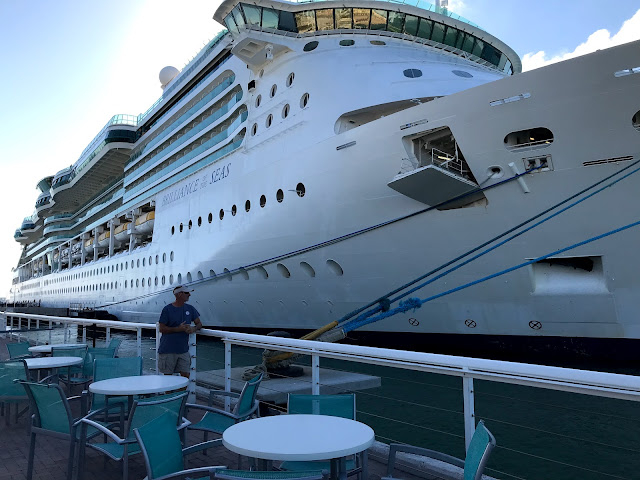 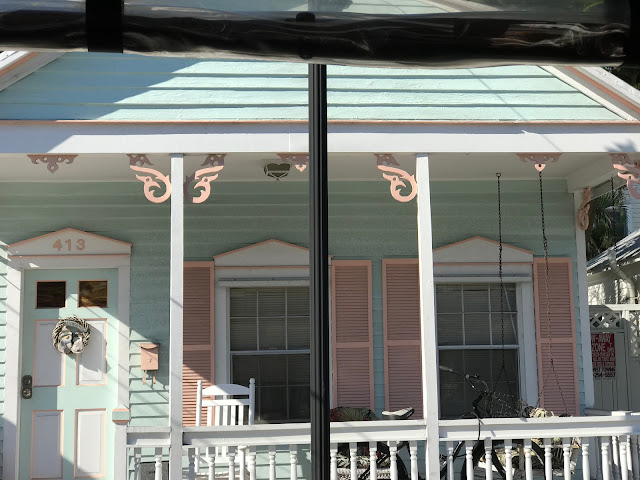 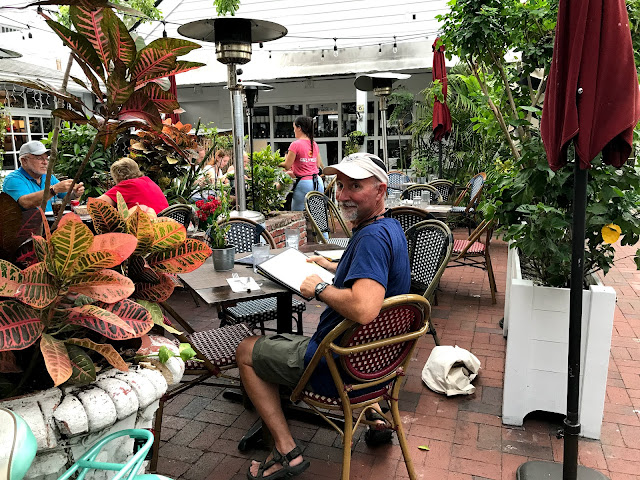 Ending the day at "Only Wood Pizzeria"
Posted by Unknown at 8:16 AM