Islamorada was a wonderful place to weather the storm.  Great food, unbelievable scenery and interesting people.  There were signs here and there of hurricane Irma but for the most part almost everything was back in working order.  Speaking of working order, we walked down to Mile Marker 88 restaurant to try their Florida Lobster and other seafood dishes on Sunday afternoon.  Here is what we had: 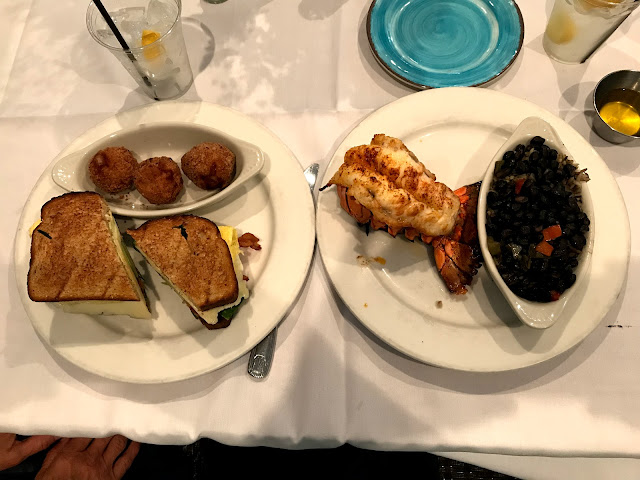 Meg had the California BLT with tater balls and I had Florida Lobster with black beans and lime rice. I have to say that I have had lobster both in Maine and in Florida and I just don't see what all the hubbub is about this dish.  Give me grouper, shrimp, snow crab or snapper any day over lobster.

Today we will continue our cruise to Key West (Stock Island) by way of Marathon, FL.  Our destination is Faro Blanco Marina where we will stay for two or three nights as we time our arrival at Key West for the 15th of December.  The wind was still blowing from the North this morning at about 15 mph causing white capping out in the Florida Bay where the AICW runs.  Viridian was tied where the dock makes a 90 deg turn and the wind was on the stern.  It was tight trying to turn her around in the wind and not hit something as we departed this morning.  The friendly dockmaster helped us get away safely and soon Viridian was heading out and turning Westerly following the island chain as it curves away from the Florida mainland.  As we cruised further down the island chain we could see that the trees on the keys were stripped of most of their branches,  This area was hit hardest by Irma as she came around the tip of Florida.  Also, the waters were filled with crab pots almost all the way to Marathon, FL.  Once we turned South for our approach to Faro Blanco Marina it was almost impossible to see the pots.  It's a miracle we didn't hit one.  We docked stern in against a strong wind but once we got tied up we shut down Viridian's engine, opened some windows and looked forward to a bite to eat and unwinding for the evening.  But first we walked across the Overseas Highway to West Marine and looked for a few things we needed.  We got in a conversation with the store manager after he found out we were trawler owners.  He told us a story about a Kadey Krogen boat that was sold, as is, by Mr. Krogen himself, to a friend of theirs.  When they were going through it they found these two large, heavy canvas bags and just thought they had extra chain rode in them and set them in a corner for later.  Once they got around to looking in the bags they discovered that they were filled with silver coins.  It turns out that the previous owners sailed all over the world and silver has the same exchange rate everywhere.  They were going to use this for all their purchases.  The new owners contacted Mrs. Krogen and said they found these bags of silver coins and the widow said that she sold the boat "as is" and they were to keep the coins.  This may be one of those fake stories they tell to everyone who comes in the store but still, it makes a good story.

This morning I walked down the Overseas Highway to a gas station to get a couple of gallons of drinking water.  There were piles of storm debris on both sides of the road as far as I could see.  Most of the business seemed to be operating and some stores and buildings had been carried completely away and nothing left but a concrete slab.  On the way back to Viridian I ran into some people from Guntersville, AL onboard a boat called "Morning Star II".  Mel & Ann actually live in Birmingham, AL but keep their boat in Guntersville.  Mel had a rental car so we all loaded up and went to Sundowners restaurant for some seafood and conversation.  It was good to see some people from close to home.

It looks like another cold front is making its way South and will be here this evening.  The NWS has issued a small craft advisory with seas building to 7 feet for tonight and tomorrow.  Looks like we may be staying here an extra day.  Oh well! 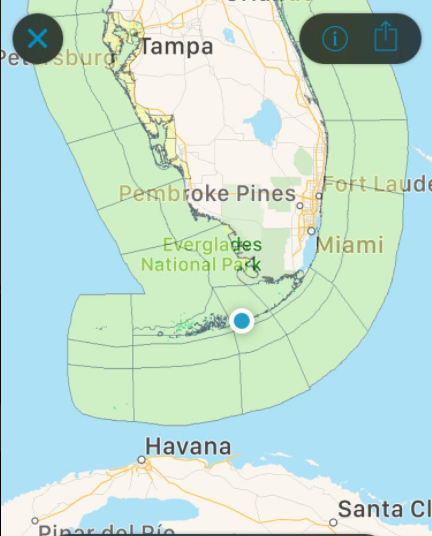 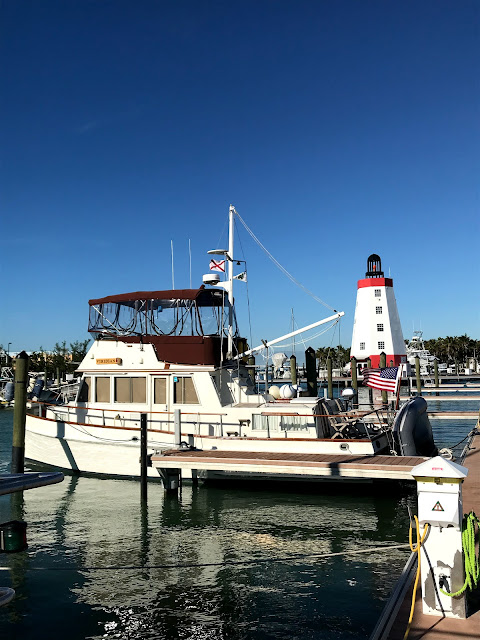 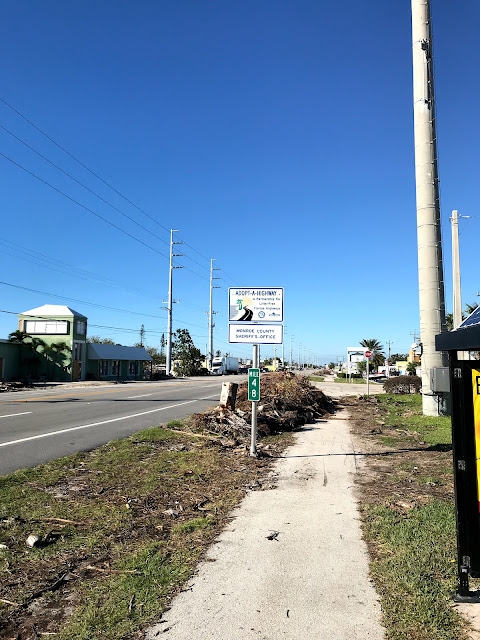 Debris piled along the Overseas  Highway in Marathon, FL 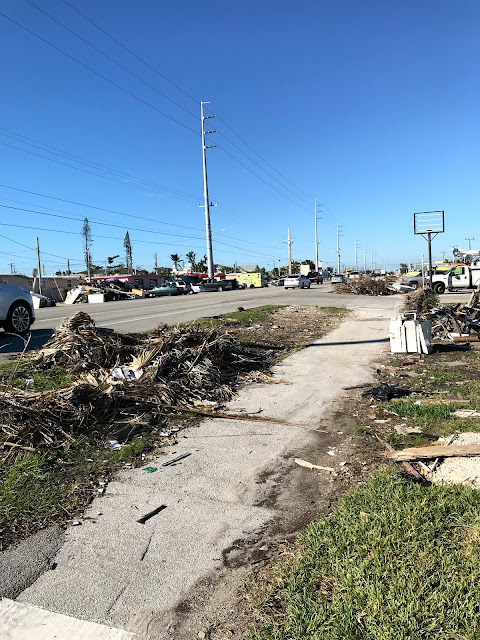 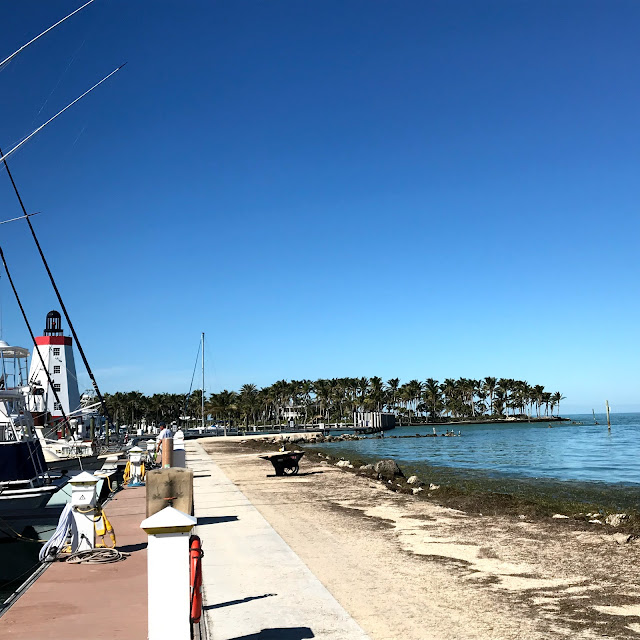 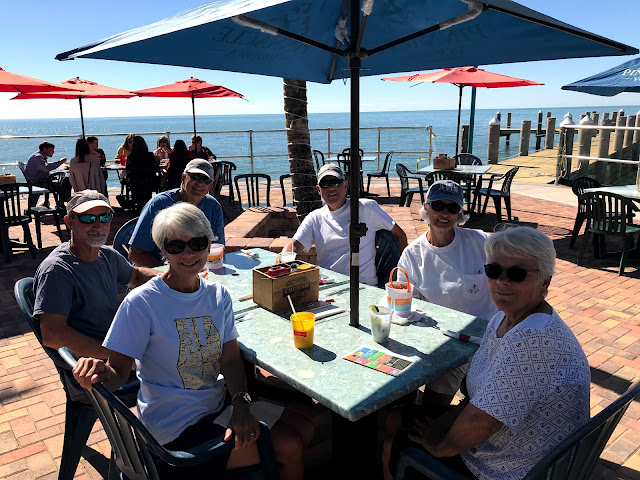 Lunch at Sundowner's located at the beginning of the 7 mile bridge in Marathon, FL 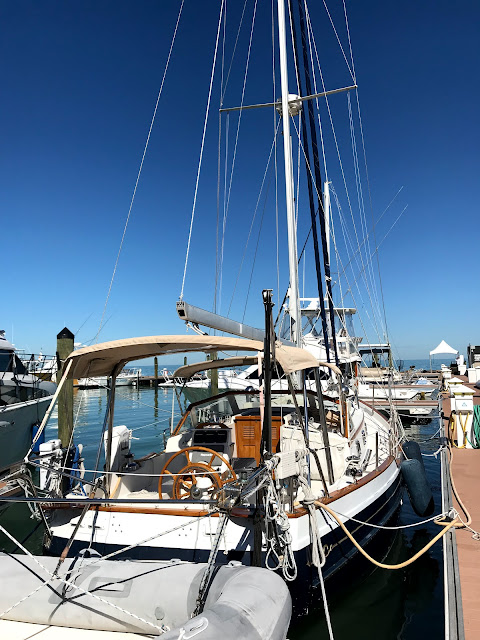 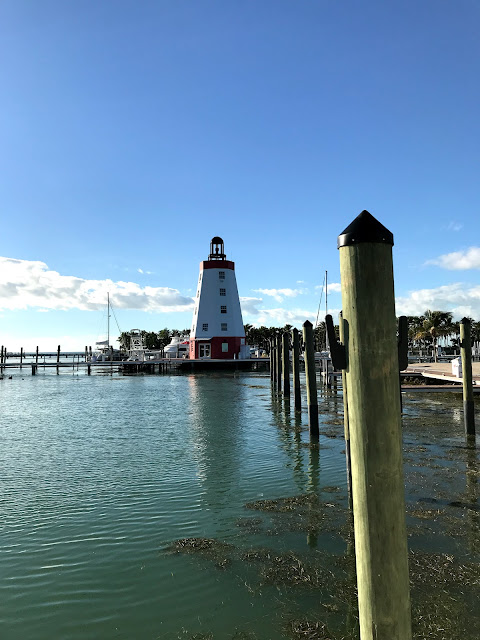 Looking out the window of Viridian in Faro Blanco Marina - Marathon, FL
Posted by Unknown at 2:00 AM