We've been docked at the Plantation Yacht Harbor Marina in Islamorada, FL.  Most of the other people here live on their boats full time.  They have pretty pots of herbs and flowers growing on the docks beside their boats and are very neighborly.  We planned to leave yesterday but the wind was too gusty for a comfortable ride.  I'm glad we stayed an extra day because we got to explore the area a little more.

Just a short walk from the marina was an art and souvenirs shopping area.  That's where the big lobster was.  She is known as Betsy. In case you didn't see the blogpost with Betsy, here she is: 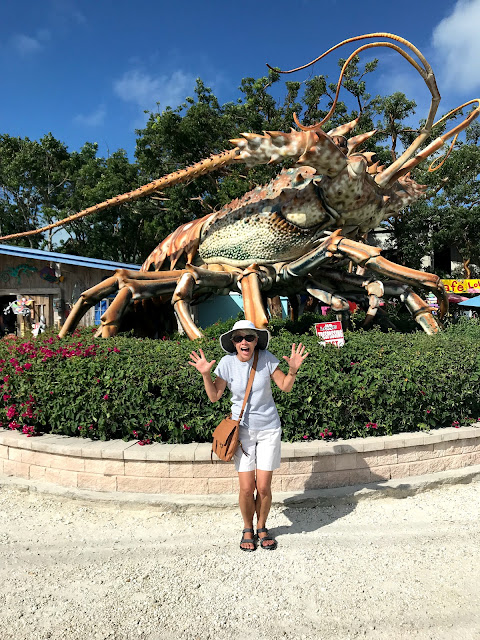 While George and I explored the shops, we ran into two ladies from the marina who filled us in on Henry Nugget, a rooster that lives aboard a boat.  His original name was Chicken Nugget but when his people tried to open a facebook page for him, FB wouldn't let them use the name Chicken Nugget so they changed it to Henry Nugget.  He is a character.  A little history on this pretty rooster: Nugget first just showed up at the grammar school where his owner taught.  He was caught smoking in the boy's room!!!  Nugget was originally from Miami.  The principal at the school told the teacher Nugget had to go because it was testing time and he was distracting the children.  So she took Nugget home and he became a part of the crowd.  They already had a geriatric dog and cat and Nugget became the boss.  Then the family moved to this area and live aboard their boat. The neighbors here in Islamorada said they were quite a sight when it came time to take the dog and cat out for a walk.  Nugget led the group, then the old dog and lastly the cat.  Nugget was secure in his position as top animal.  One day another boat owner came out with his newly adopted German Shepherd.  Nugget marched over to the shepherd to let him know what the pecking order was and the big dog grabbed Nugget in his very big mouth and slung him into the water!  They said chickens can swim but someone grabbed a net and fished Nugget out! However, most dogs head for the other side of the dock when Nugget is out.  His spurs have been clipped,  his beak looks like it has been filed to a blunt edge and his "claws" have been trimmed so he's pretty harmless.  Nugget is also a certified therapy rooster complete with his own harness.  Henry Nugget leads the Christmas parade in Islamorada.   His owner put him in a tote bag he couldn't see out of when she, her husband, her twin 4 year old grandsons and a kitten they found at the dock were headed to the pet fair.  It was a sight to see! 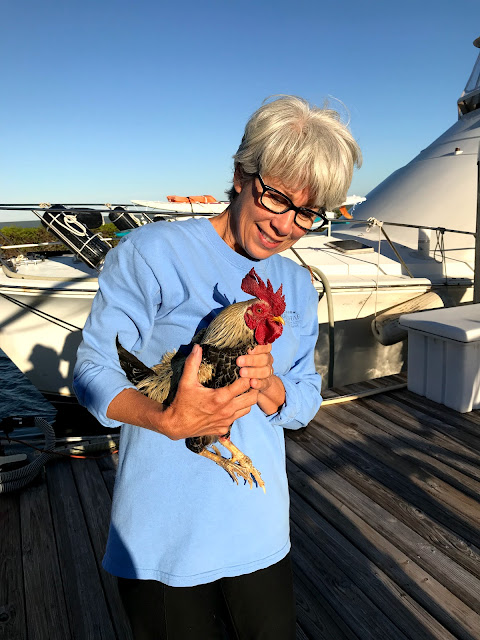 Thought I would  never be holding a rooster! 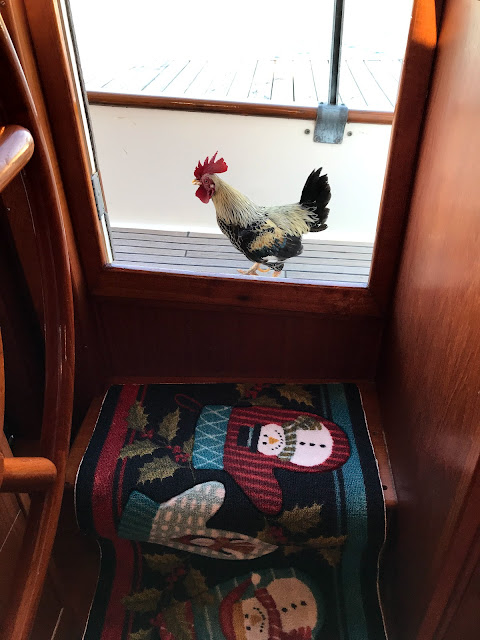 By the way, you can find Henry Nugget on facebook or go to my facebook page and see a very short video of him and his pitiful little cock-a-doodle do.

On our walk home from a late lunch yesterday, George and I strolled through a neighborhood in Islamorada.  The first home we came to had a big, barking dog chained to the porch.  On the front of the house was a sign that read, Beware the Owner!  That was a twist!

Today we arrived in Marathon, FL after traveling over beautiful waters.  George gave me this bracelet for Valentine's Day that has stones the color of this water. 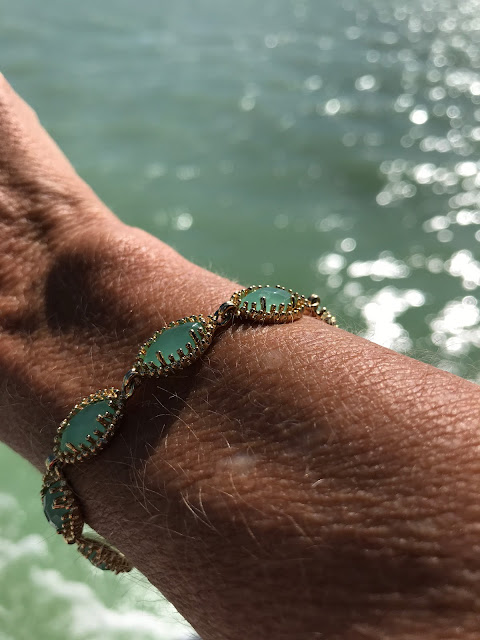