Little Current was another small town marina facility that featured shoppes, ice cream and a place to re-provision and do laundry (marina stuff). There were events held there every day that people went to see such as precision motorcycle riding by the local police departments, chainsaw art demonstrations and other attractions, none of which we attended. We were asked to move off the wall and into a slip to make room for larger boats coming in to town so we obliged and helped Dash Away move as well.

Something we have always wanted to do, try paddle boarding, replaced the town sponsored activities. Tim and Ramie of Miss Norma got down their paddle boards and gave us a quick lesson on how to properly size the paddle and where and how to stand on the boards. Soon Meg and I were out in the harbor zipping around on our new found activity and loving it. Once we got the hang of it we could relax and enjoy moving in and out of pools between finger docks. I was relaxed until I was paddling near a dock and a large boat was headed in my direction. The first mate on that boat was yelling at me to please move because they were docking right where I was paddling! They were a little stressed because their pod engine was malfunctioning and they had limited maneuverability. The dock hands at our marina were not there to help them get tied up so George had to paddle to the dock, pull the 25 pound paddle board out of the water and put it on the dock then catch their lines. There is a little current in Little Current marina so we were careful not to get too far downstream of our home base. With a little more practice and some conditioning, I believe we could cover some miles on a good day at the lake on these vessels. What a fun thing to do!

The crews of Dash Away and Viridian were invited again back to Miss Norma for supper on the stern. This time Tim whipped up some cartanias. George and I had never eaten these before. Tim slow cooked a pork shoulder, shredded it and served it with slaw and mashed black beans with cheese melted on top. Our eating utensil was a tortilla. We had fresh cherries for dessert. As always, it was over the top.

Viridian departed this morning with Dash Away and Miss Norma and we all headed 19 miles west to Kagawong Municipal Marina. About half way there we ran through a swarm of little bugs that looked like mosquitoes. Wherever they landed, they stayed and we're still trying to get them out. Every spider web on the boat was filled with these bugs. We tied up along the City Dock for a few hours while we hiked over to Bridal Veil Falls, a 60 ft waterfall that is a must see feature along the southern small boat route along the Georgian Bay. After a good hike to and from the falls we fixed picnic lunches and sat down at the tables on the dock to enjoy the scenery and the unbelievable cool, dry weather we are having here in August.

The cruise plans for our traveling buddies are starting to diverge at this point. After departing Kagawong, Dash Away and Miss Norma sailed west on along the southern small boat route while Viridian sailed 20 miles north to the northern small boat route to anchor at a remote location called Hidden Harbor. This is about as far away from anything as you can get in the Georgian Bay and marks our maximum northern position of a little over 46 degrees north latitude. We wound our way through deep (120 ft) fjords between the now familiar granite walls in clear, deep water to a narrow passage tucked far back into the Canadian wilderness for our final anchorage in this wonderful cruising area at the northern edge of America's Great Loop. 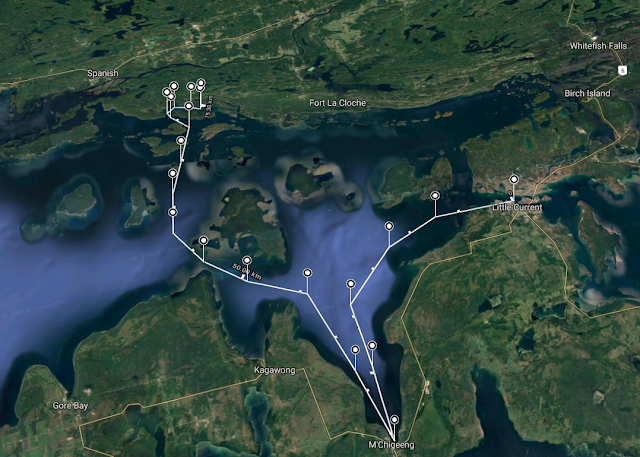 Today's Cruise from Little Current, to Kagawong and north to Hidden Bay Anchorage 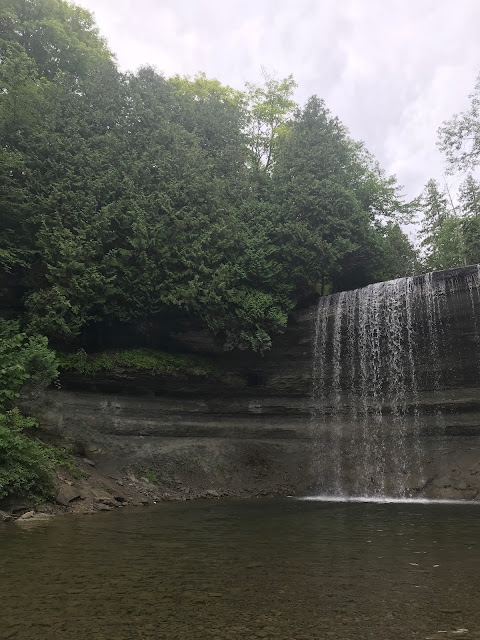 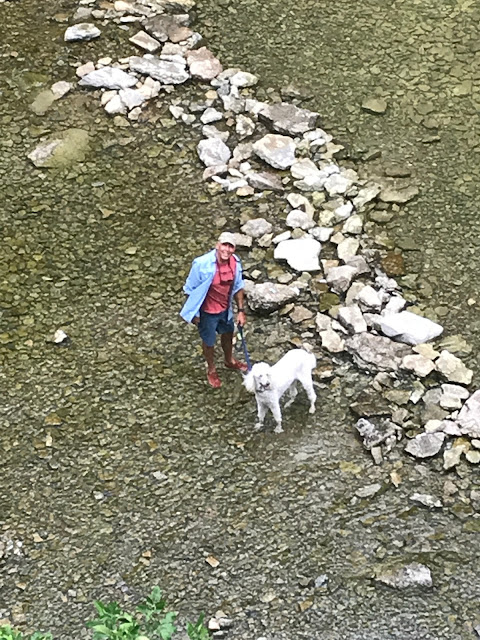 Time and Ringo at the Falls 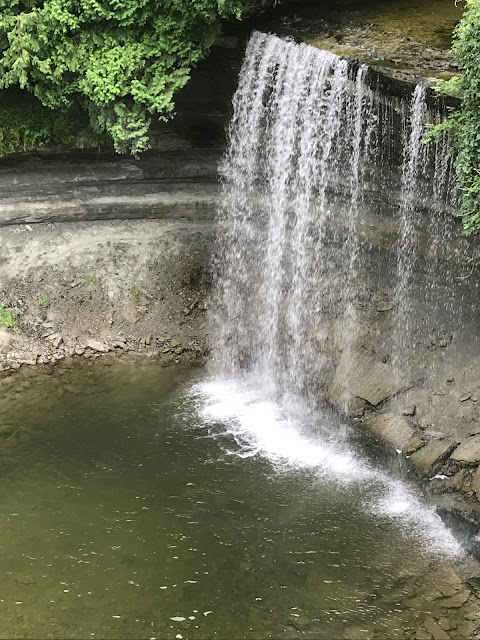 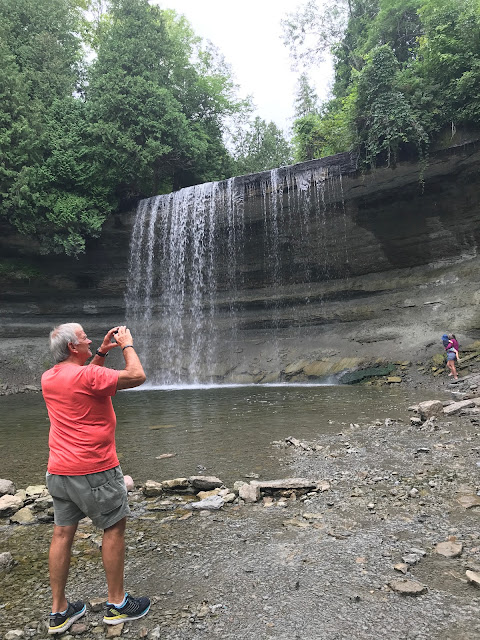 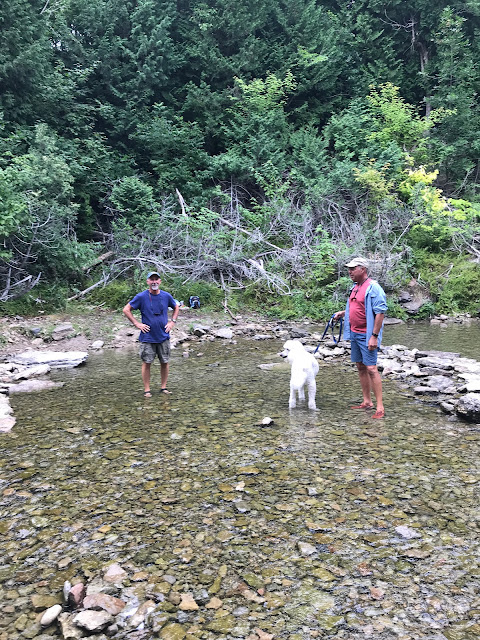 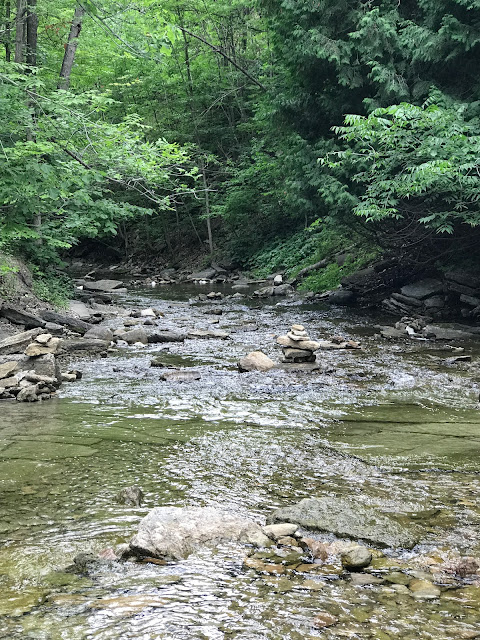 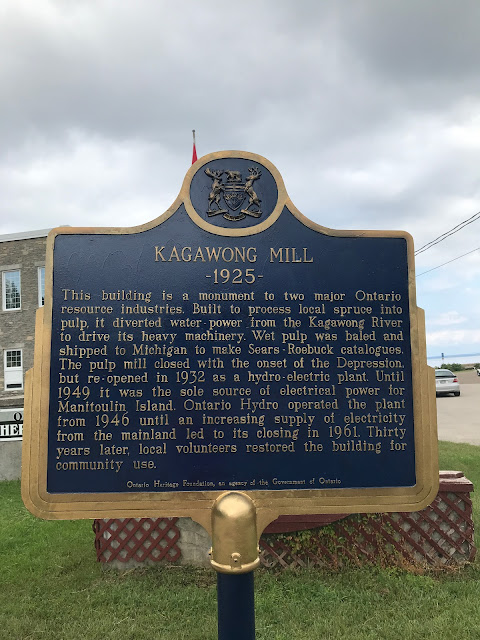 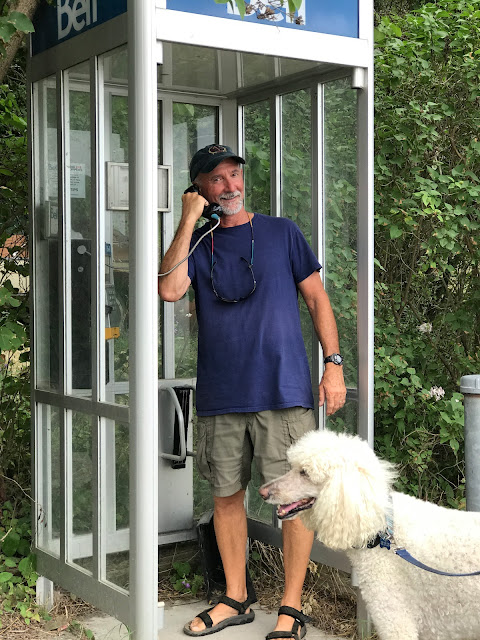 It's for you, Ringo 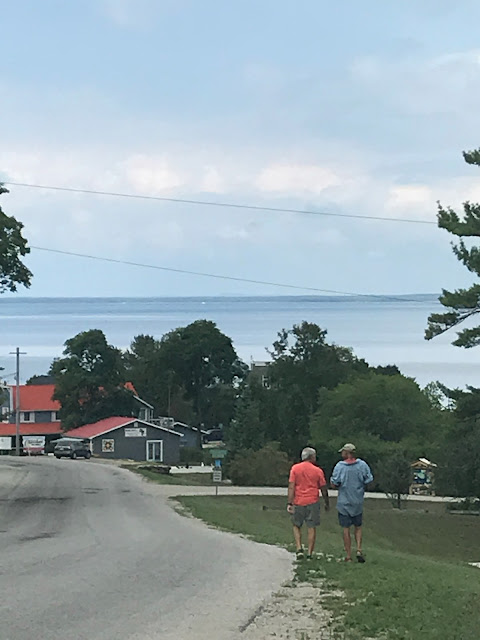 Mike and Tim and the view 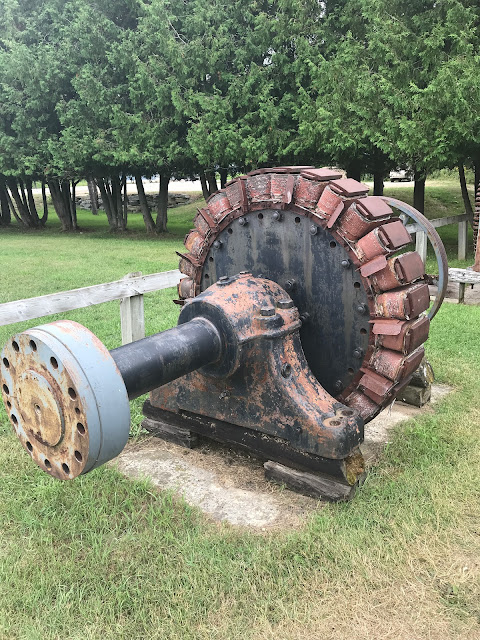 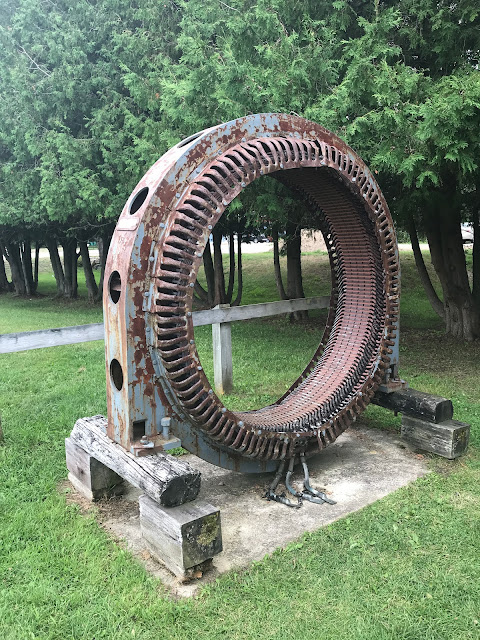 Probably lit many home lights in its day 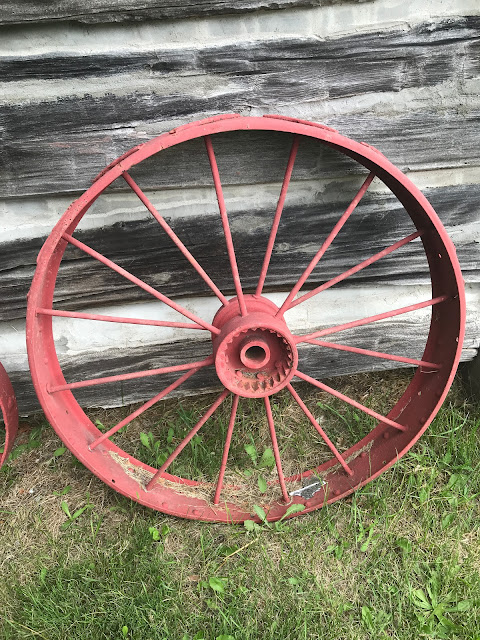 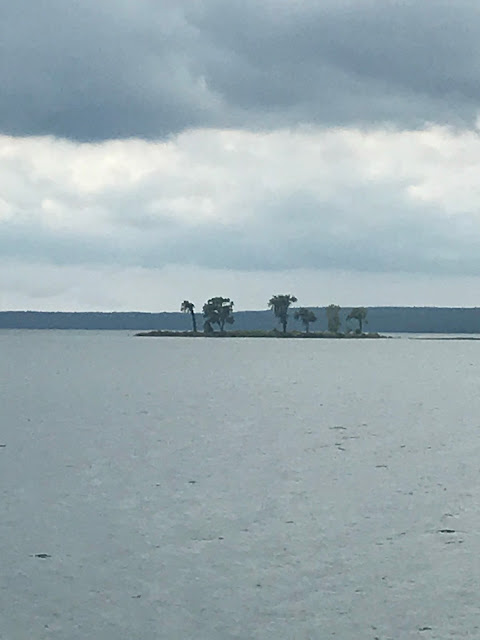 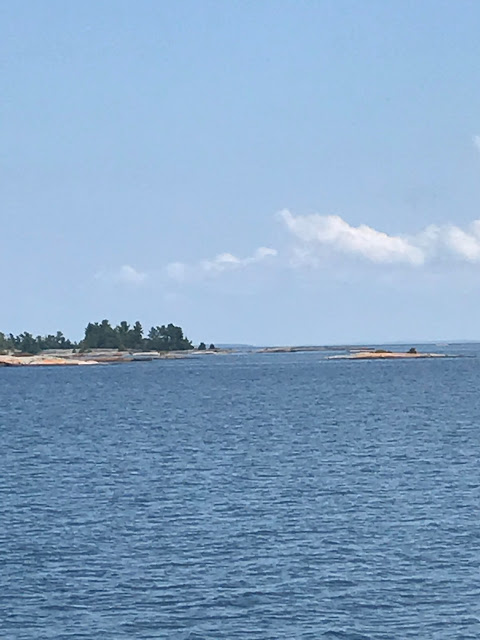 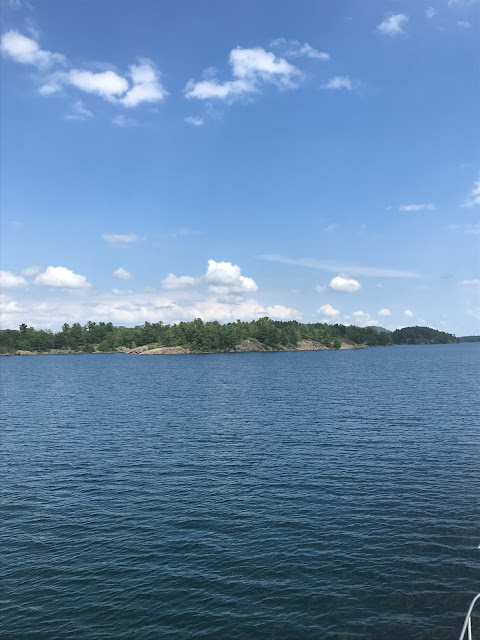 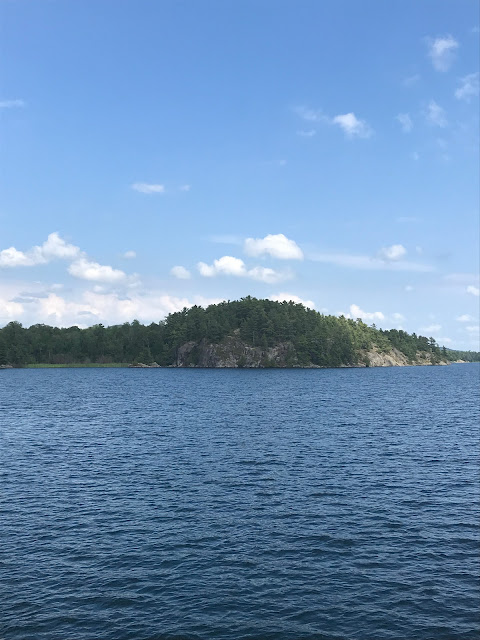 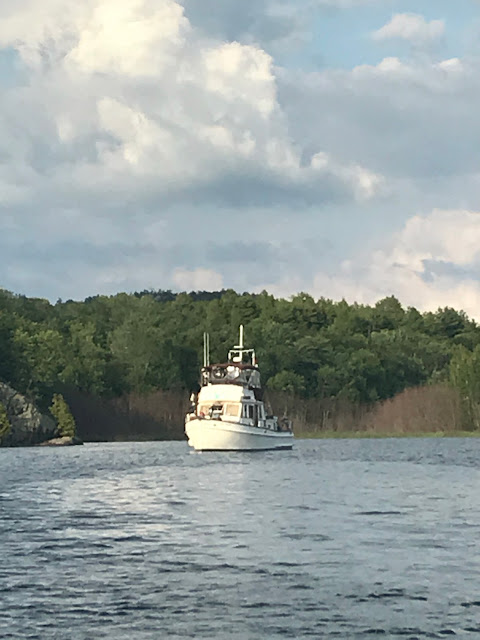 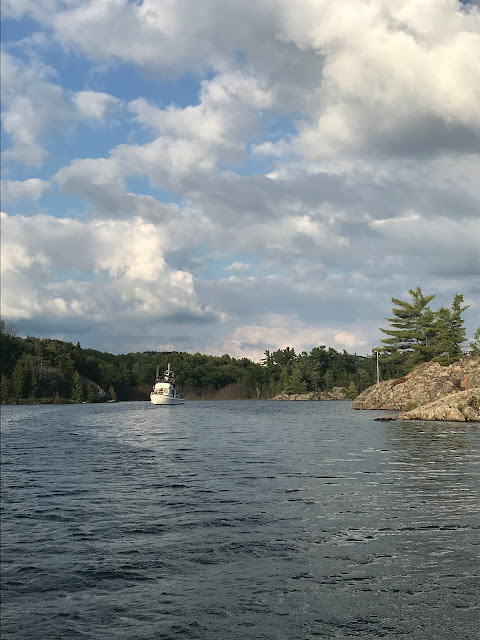 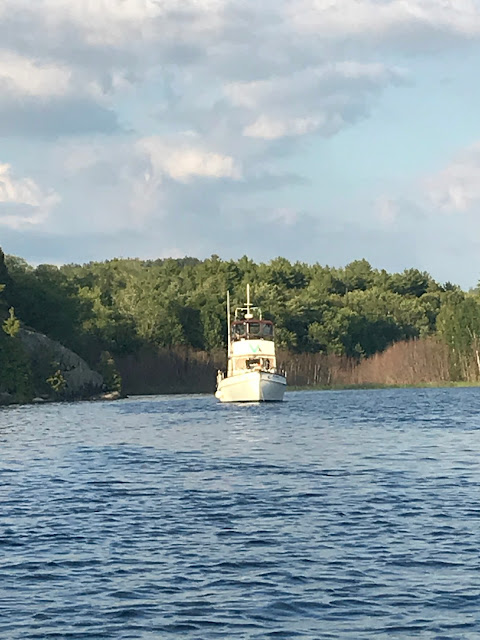 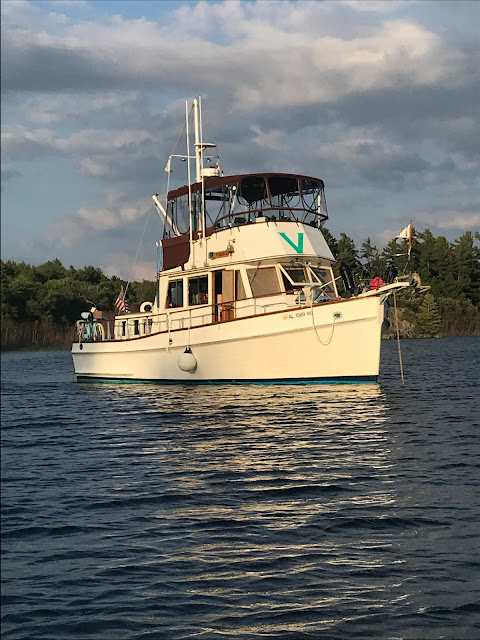 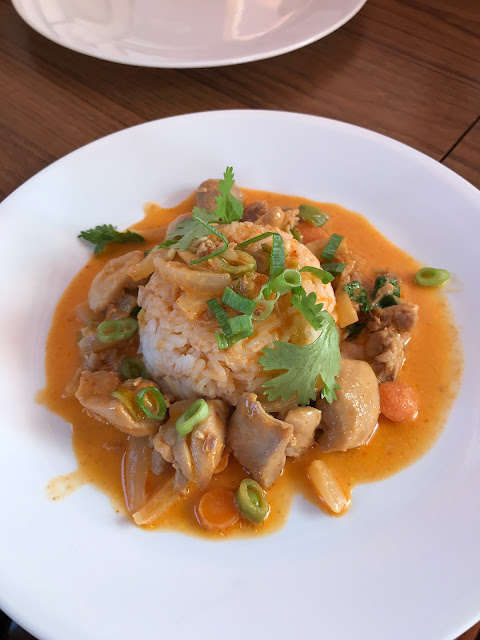 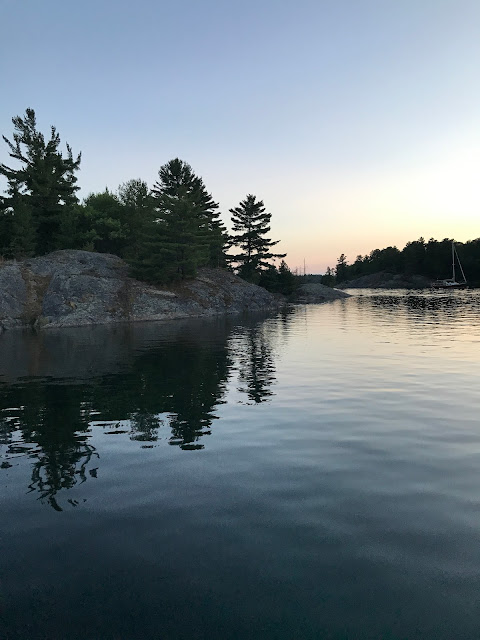 Time to Relax
Posted by George Sanders at 1:11 PM