We really liked the town of Grand Haven, MI.  Probably one of the best along the eastern shore of Lake Michigan.  Can't say that the marina was one of the best.  The staff was great, the facilities were great, the docks in good shape and the proximity to town was excellent.  The problem was the water.  Viridian tugged on the dock lines and chewed on the fender balls the entire time we were tied up here.  The water was non stop washing machine confused.  Every boat there was in constant motion, all day and all night for three nights.  We looked like drunks walking to town after spending the night onboard.  In all the marinas we have visited so far, this one was the first one we couldn't wait to leave.  The only reason we stayed as long as we did was because of the sea conditions on the Lake.  This was no doubt contributing to the constant turbulence, along with the wind, but this  morning everything was dead calm.

A thick fog rolled in and with it came calm winds and calm water.  The fishing boats leaving before sunup were the only thing disturbing the water as we made Viridian ready to get under way.  Nav lights, radar and instrument panel lights were switched on as well as the ship's horn.

The course was a straight line south for about 67 miles to the town of St. Joseph, MI.  Once we cleared the inlet we were on instruments for the next 50 miles.  The fishermen had not been able to get out until now due to the high wind and wave conditions for the last few days.  Now they were making up for lost time.  We see them on our radar as our path cut through their fishing holes.  Most of these fishing boats were trolling at slow speeds with a half dozen lines trailing behind.  If we got within 1/4 mile of them we would sound a prolonged blast with our horn every two minutes.  Usually this would require only one blast since they would be behind us pretty soon.  We both had to keep a constant lookout both at our instruments and outside as we motored along our electronic rum line in the soft glow of LCD light.

Long before the fog lifted we were visited by tired little bird called the American Goldfinch.  It had found us 10 miles off shore and needed a place to rest, probably because it had gotten disoriented in the fog.  Once it caught its breath it began hunting down any bugs we had onboard and eating them with gusto.  It found several spiders and some flies that we hid killed and had blown into a crack.  It climbed the halhard on the mast and cleaned bugs from places we can't reach.  This went on for a good while and every now and then it would be seen flying around the boat looking for an opening in the fog so it could continue on its way to wherever it was going.  We don't know when Mr. Finch left us but there were fewer bugs onboard and it was for sure he left on a full stomach.

The last few hours of our passage was under a sunny sky and it was getting on to be about 1500 as we turned into the St. Joseph inlet.  It was a madhouse of boats, seadoos and weekend water lovers trying to squeeze the last few days of summer before it all comes to an end.

Our slip in the West Basin Marina was tucked in a protected harbor mostly filled with local sailboats.  It was quiet and away from the madding crowds.  However, it didn't stay quiet for long!  After we left the marina store, which was quiet a hike from our slip, we stopped by the restroom and laundry house to check out the facilities.  All was peaceful until I heard someone banging on the door.  Outside we could hear and extremely loud horn blasting away like a runaway train was about to appear soon.  It was Viridian and the horn was somehow stuck on again, like it did at Half Moon Bay in New York.  We hurried over to turn it off at the breaker panel as people stopped what they were doing and began pointing and standing with their hands on their hips looking in our direction.  We did not know just how loud our horn was until now.  Standing directly in front of it, even 50 yards away,  makes you want to cover your ears.  We killed the ear splitting, resounding horn but not soon enough to ease the upset little girl who was walking past Viridian with her Dad when the horn decided to let go.  They thought there was some sort of alarm system that was set off by someone getting too close to the boat.  She was wrapped around her Father's leg the whole time we were talking and would not give eye contact.  We need to look into this horn issue. 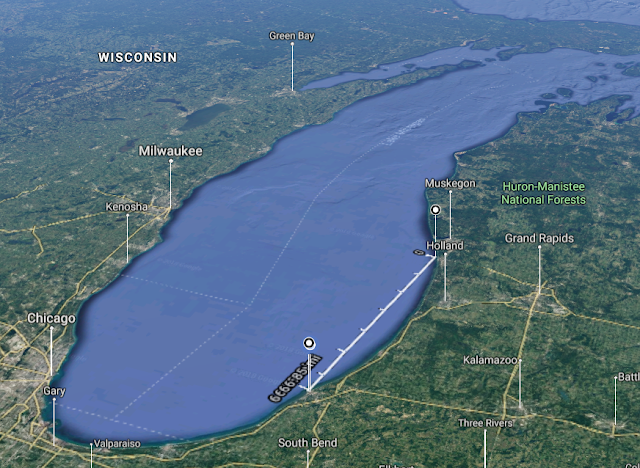 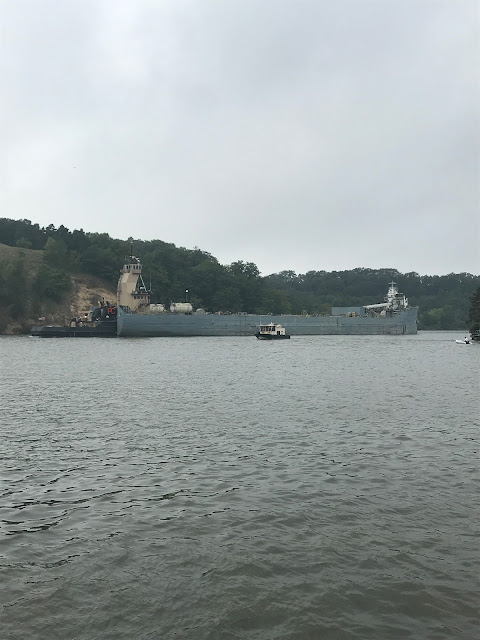 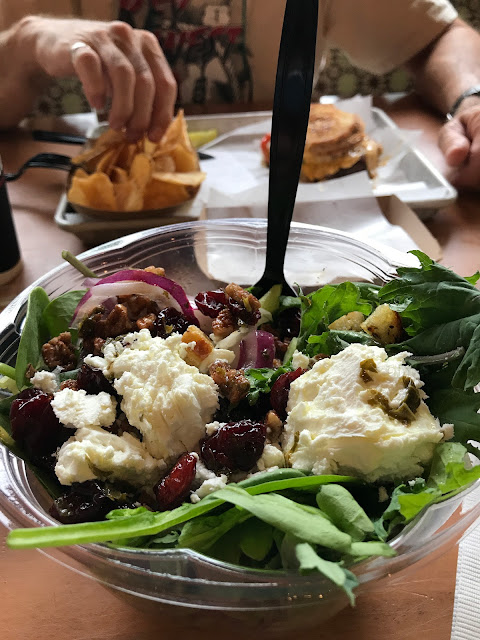 Lunch at the Toasted Pickle Restaurant in Grand Haven, MI 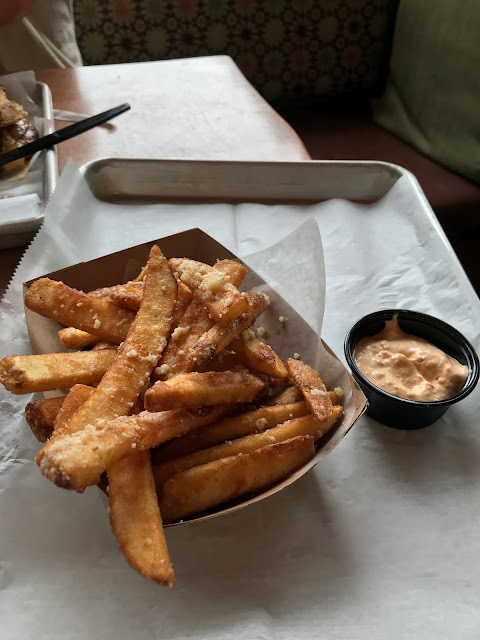 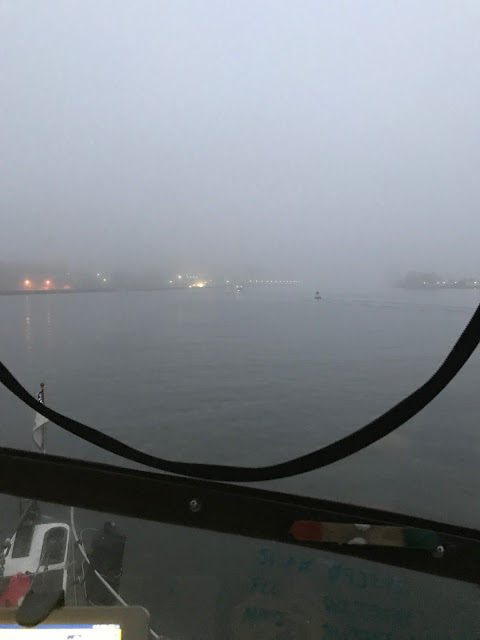 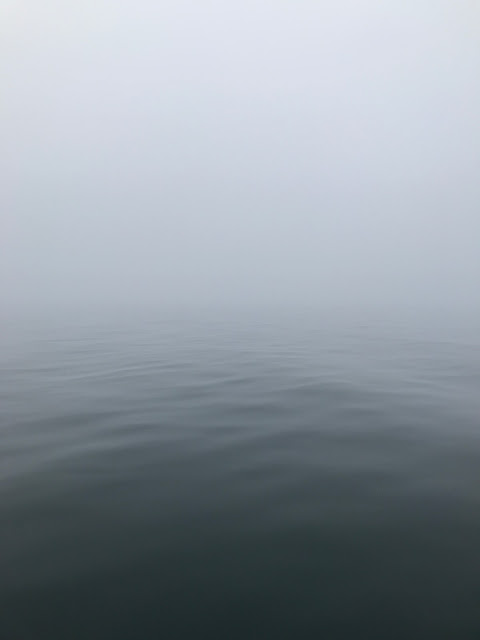 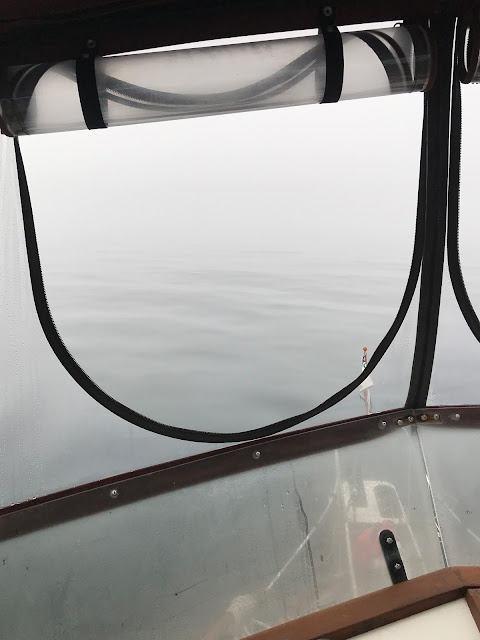 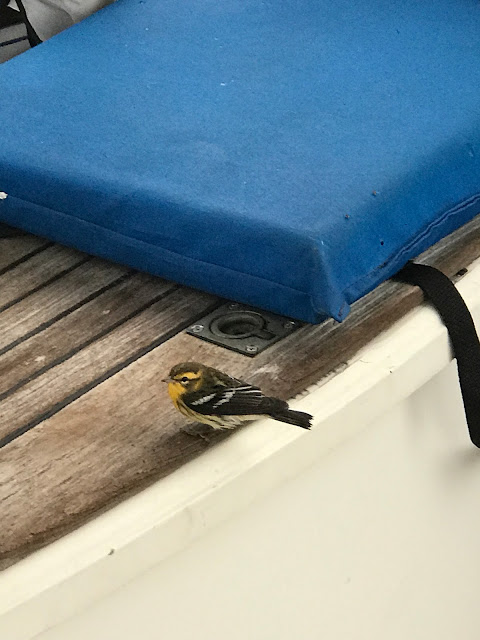 This is Finch the Bug Eater 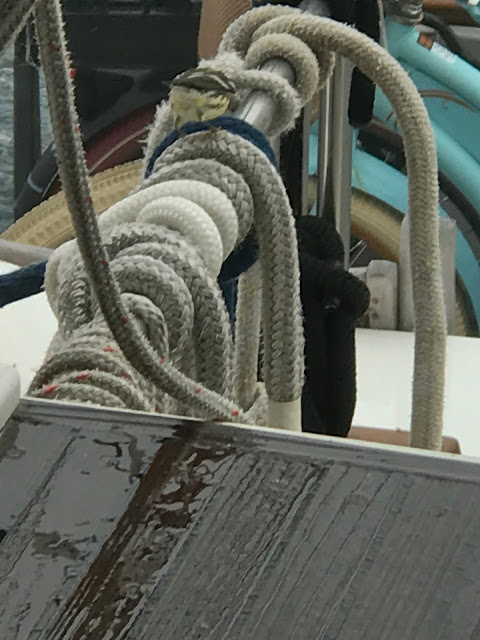 He cleaned our lines 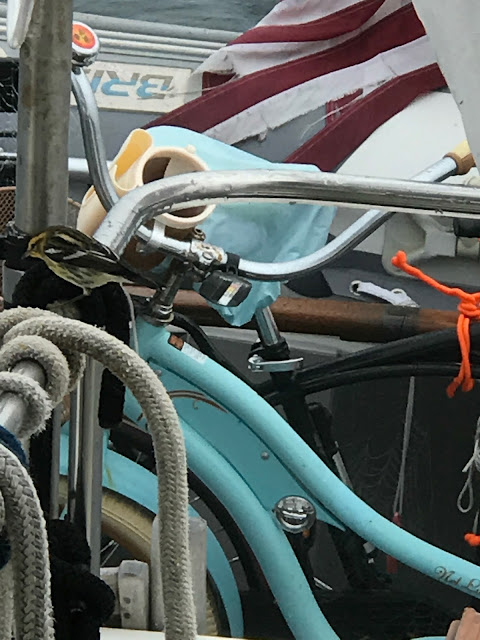 Checked out the bikes 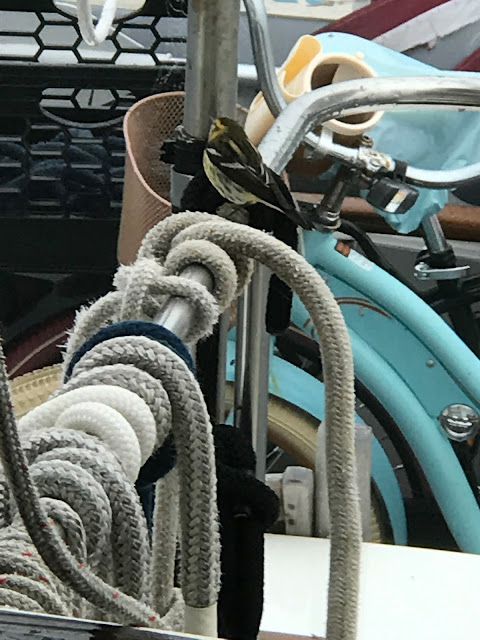 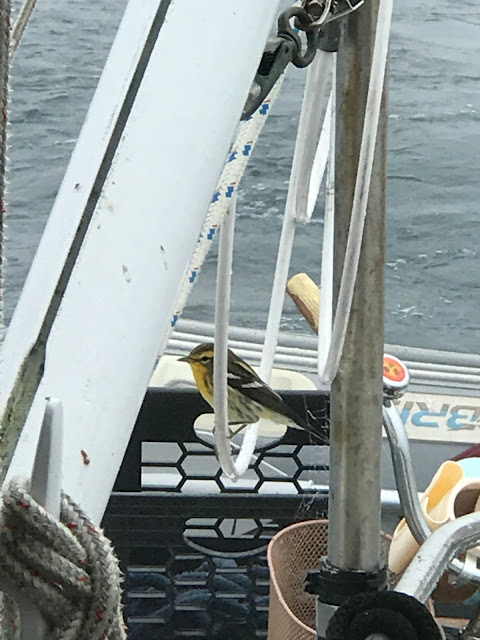 Hunted along the boom 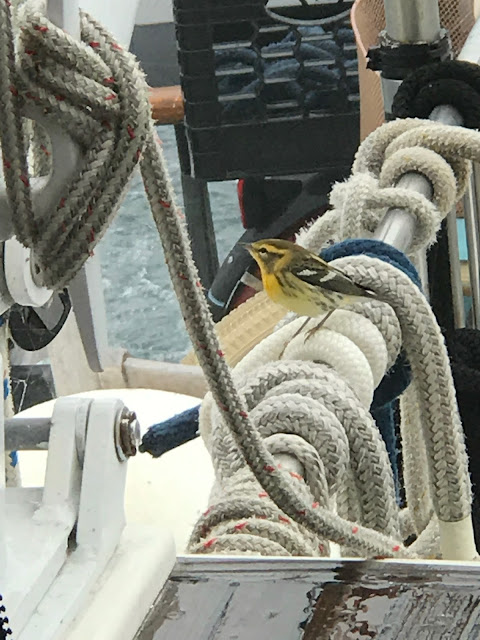 Found every spider onboard 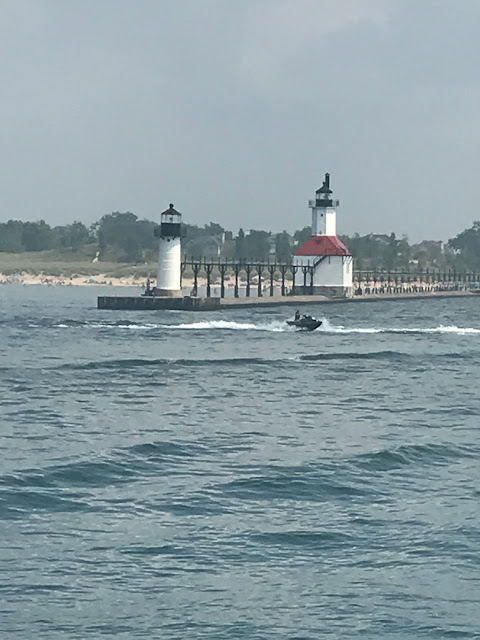 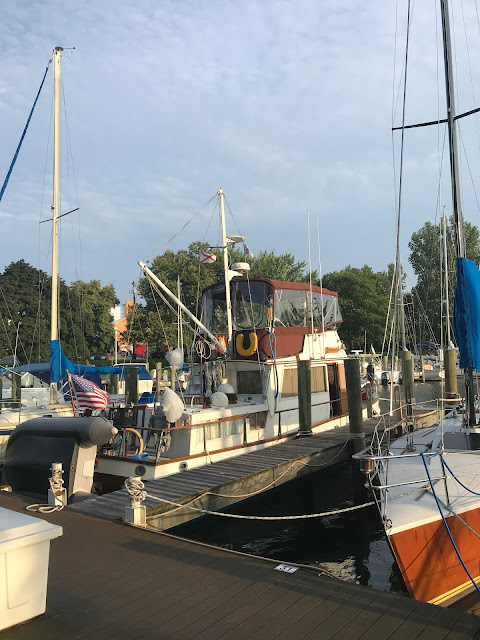