Mosquito Creek and the Dock Side of the Moon

Timing is everything when in the land of large tidal swings.  Viridian chewed on her mooring ball all night and all morning until we took it away from her at Noon.  I say chewed because we picked the one ball that happened to be located in an eddy current that caused Viridian to run over the mooring ball, pull it under the her hull till it pops out on the other side making a terrible noise.  It took a little noodling to figure out what was going on but after watching a full cycle it became clear that we were in an area where physics was not obvious.  All the other boats were behaving as one would expect by going with the flow.

Now, the reason we waited to depart Beaufort at Noon was to time the trip so that the tide was rising when we went through the notorious Ashepoo Cut and we had enough water to keep us off the bottom.  We also wanted to get into our stopping place before dark.  So after a nice walk through the Old town of Beaufort, SC and photographing a few more sights, we dinghied back to Viridian and got her ready to depart.  We would be traveling with Captain Mike in Dash Away again today and he was tied to the outside long dock and was ready to start north for either an anchorage or a primitive dock tie in Mosquito Creek off the Ashepoo River some 25 river miles away.

It was absolute low tide when we passed under the Woods Memorial Swing Bridge out of Beaufort, SC.  Fortunately, we had deep channels to run with plenty of water on the first part of our journey and just had to make sure we stayed in the middle and watched other vessels to see where they went.  Of course, the charts had to be payed attention to as well.  Steaming north on the Beaufort River we rounded Pleasant Point and headed for the Brickyard Creek Cut that carried us into the big waters of the Coosaw River.  With the Atlantic in sight we swung to starboard and entered the Ashepoo Cut at Rock Creek with 3 ft of tidal water above what was there at low tide.  Wind and current always present, we slid between the red and green channel markers and entered the relatively calm waters of the Ashepoo.  The depth gages went from 30 feet of water to 4 feet pretty quick.  A dredging crew was busy digging out the channel and did not answer our calls for guidance around them.  We picked what looked like the best way to go around and idled by as the dredging machine hoovered up mud and pumped it to a spoil area where a dozer pushed it around and spread it out.  Constantly searching for the deepest water we watched our depth gage climb or fall depending on what the bottom was doing.  All the while the water was rising and soon enough we were in 12 feet of water and heading into the Ashepoo river that brought us to the Mosquito River where we planned to spend the night.

I had called the owner of the B&B Seafood Market to ask for permission to tie onto his dock since several ActiveCaptain reviews said that he allowed boaters to use his dock for a small fee.  He finally answered the phone just as we were coming into sight of the landing and he said for us to come on in and he would help us get in and tied up.  We were met by Billy and some of his workers and they caught our lines and got us secured then we helped Captain Mike get Dash Away secured just in front of Viridian.  We settled up with Billy but he had to go to Beaufort to buy some calk for his shrimp boat before the store closed at 5 so we didn't get a chance to buy any fresh shrimp from him.  Bummer!  There is no electricity we could use here nor any water so we were pretty much anchoring except we were tied to a floating dock.  This is a good thing as we tend to sleep better at night.

We had all purchased some Chuck Eye steaks at Walmart in Savannah, GA so we fired up the grill and got them to medium rare, turned on the generator and A/C, closed up the boat to escape the no-see-ums and had a good supper on the dock in the Middle of Nowhere, SC.  Hince, the Dock Side of the Moon. 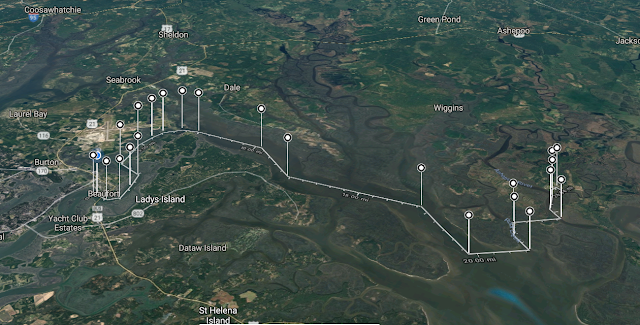 Looking Back at Beaufort, SC 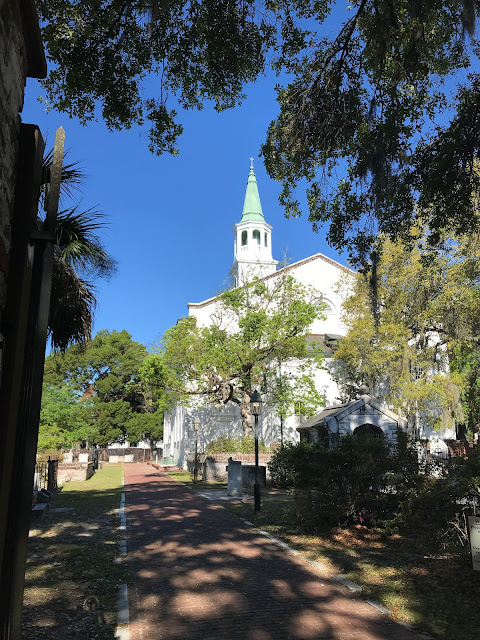 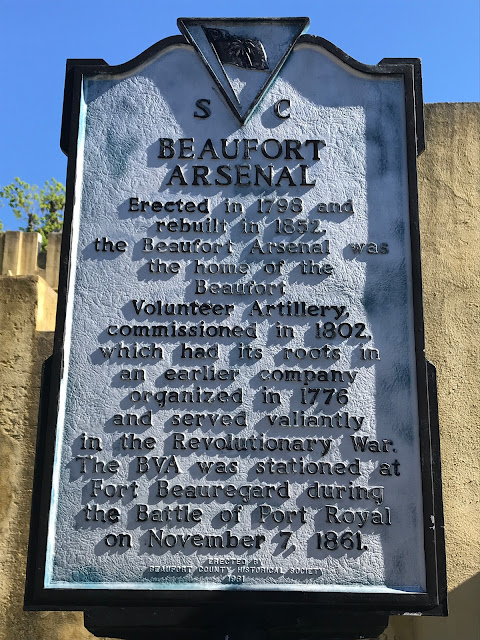 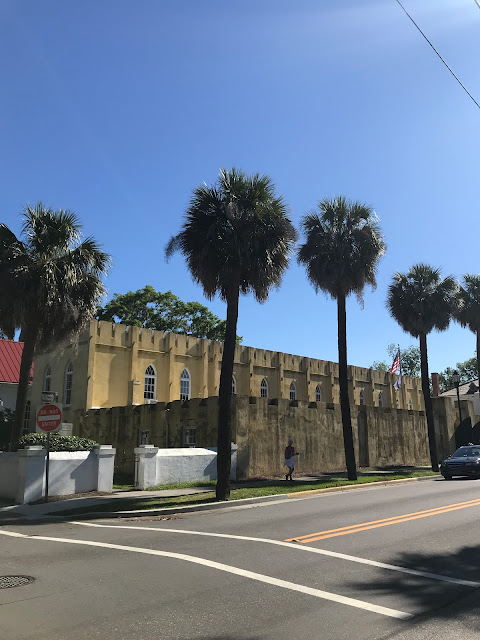 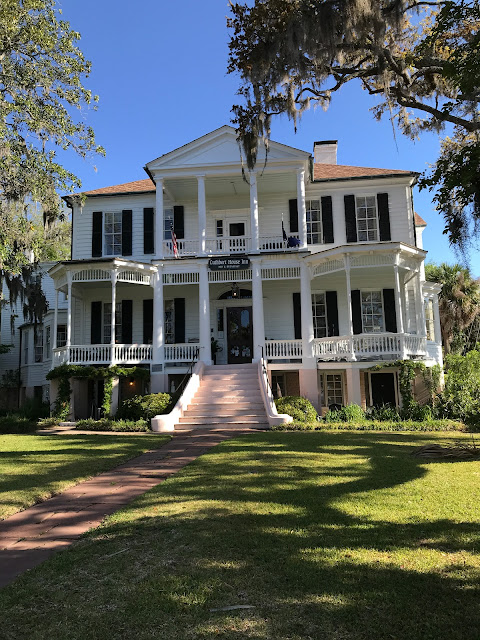 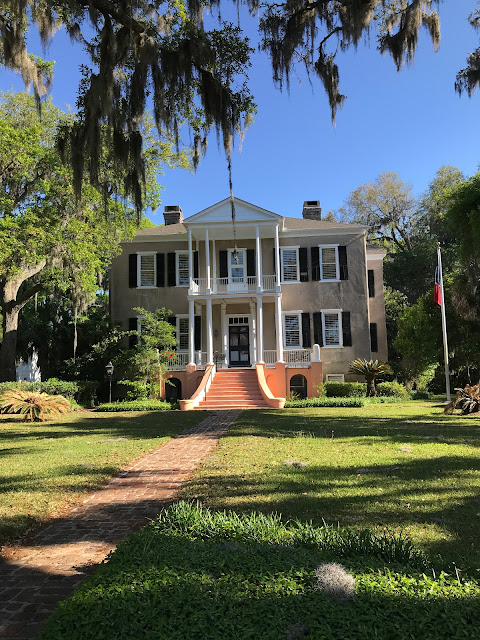 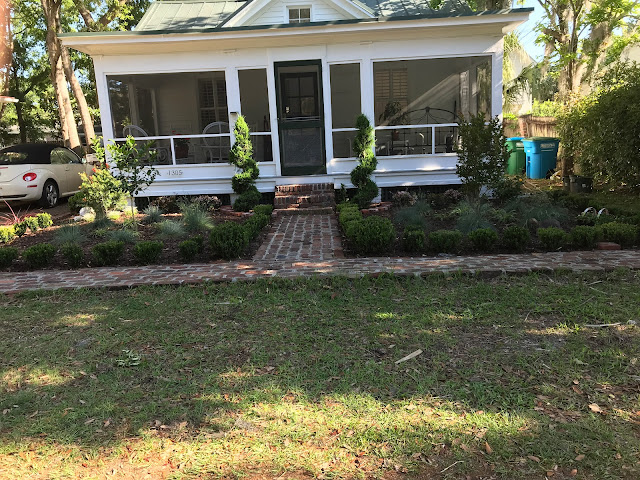 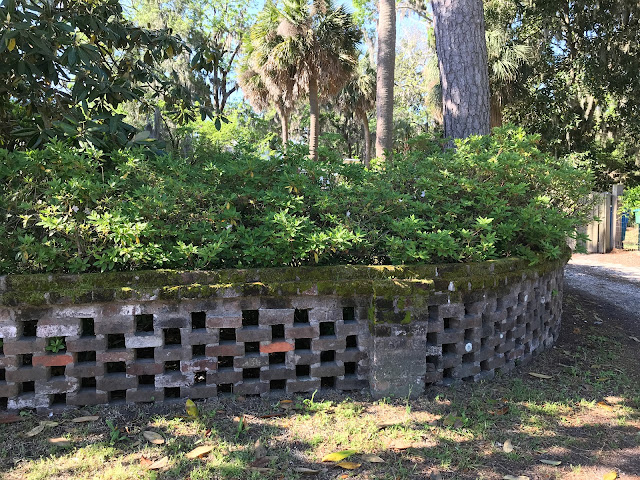 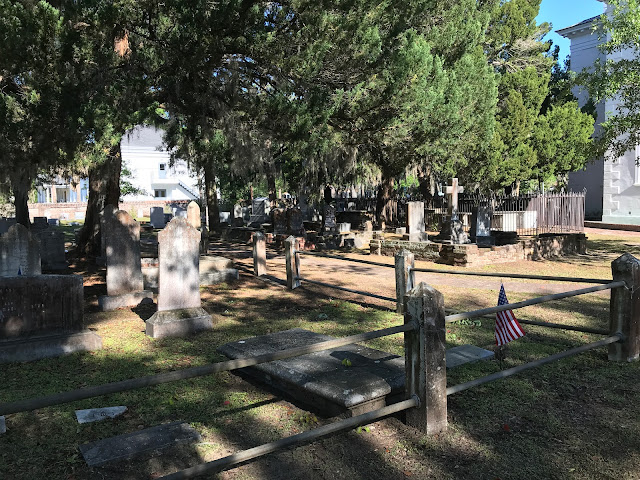 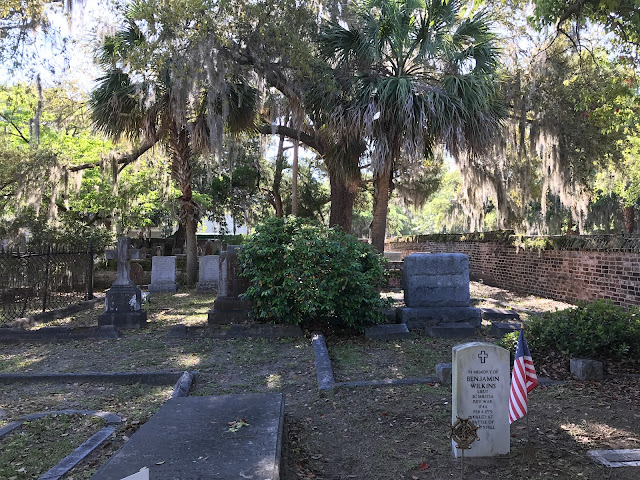 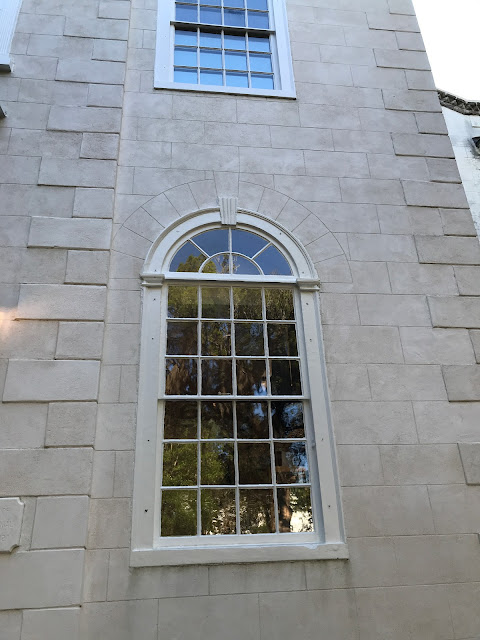 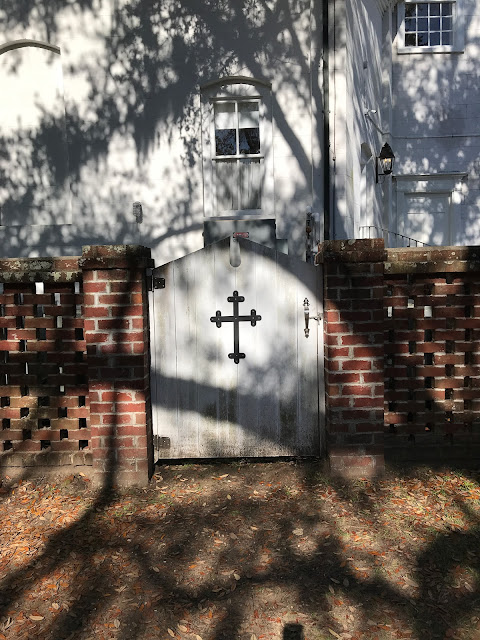 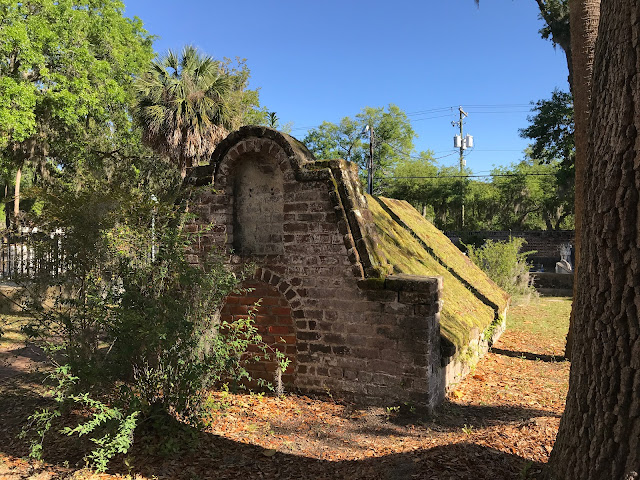 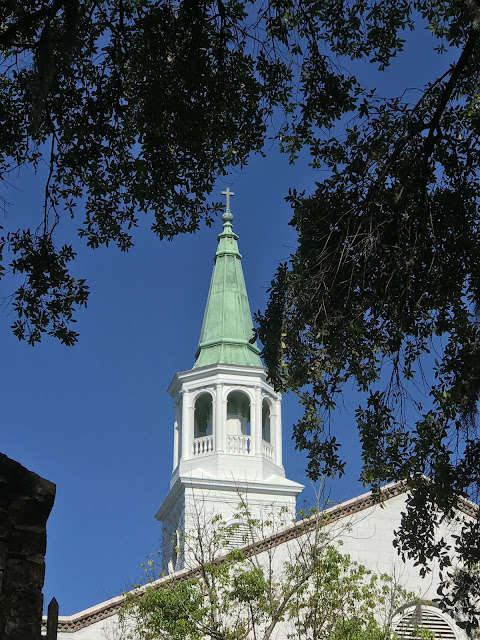 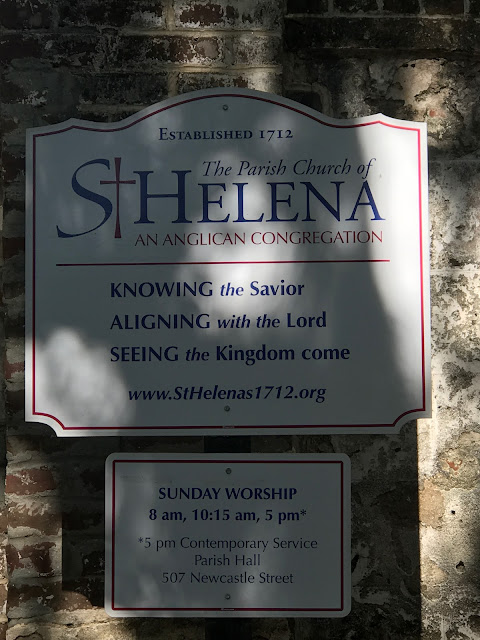 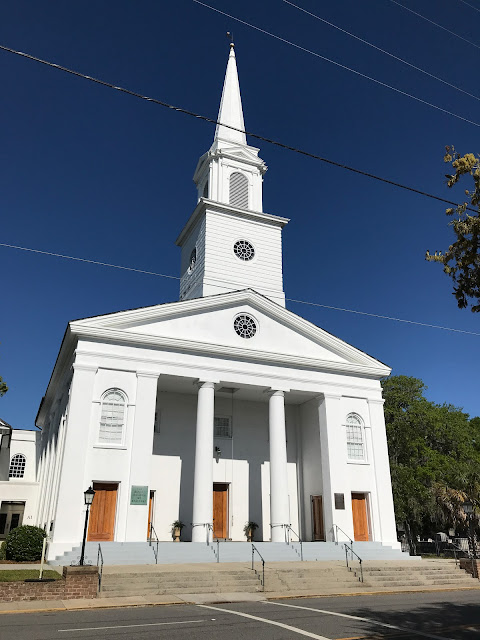 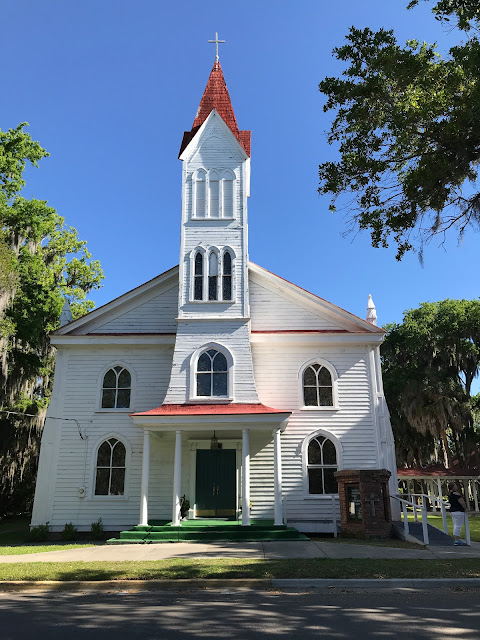 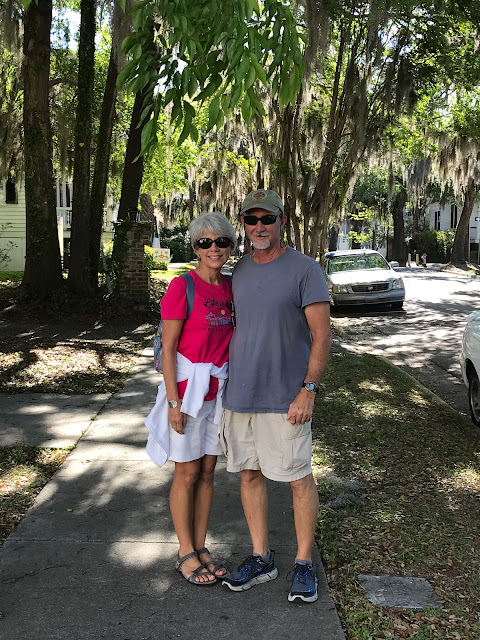 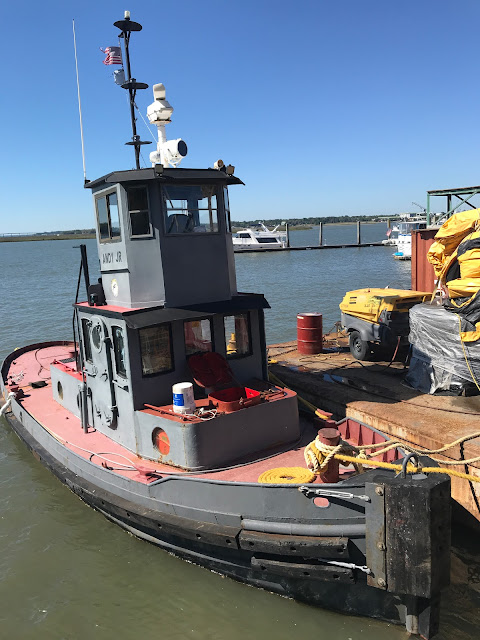 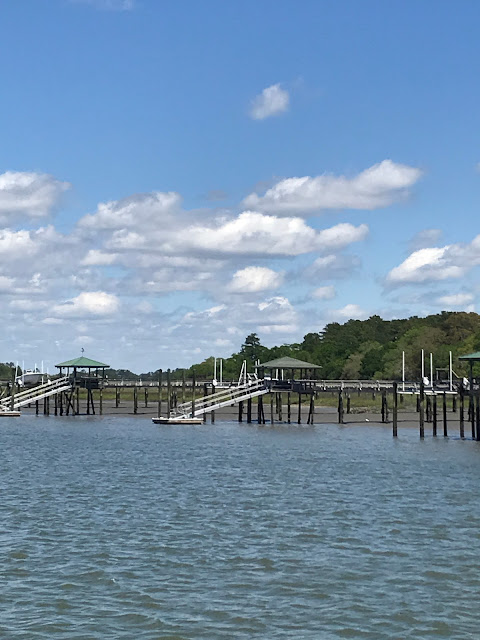 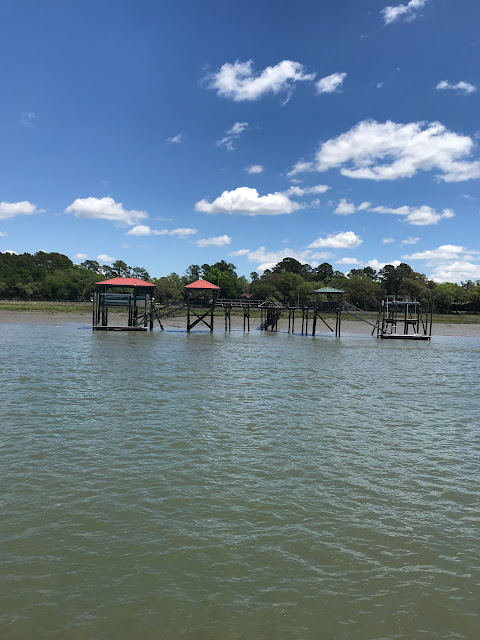 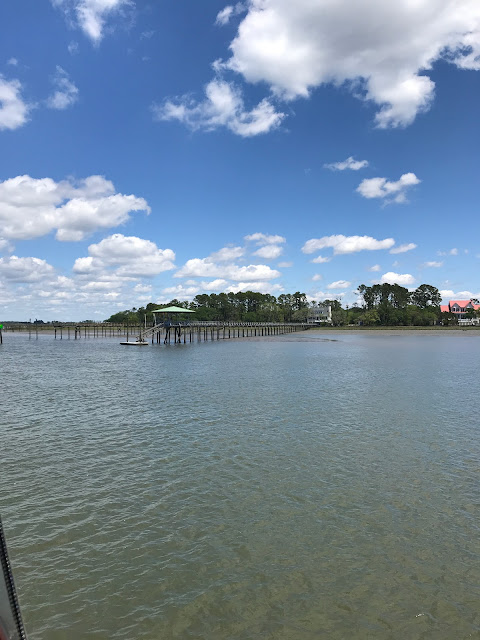 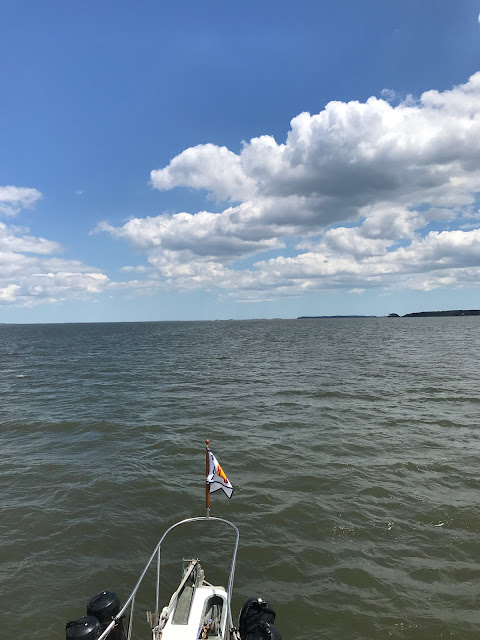 Back in Big Water, Deep Too 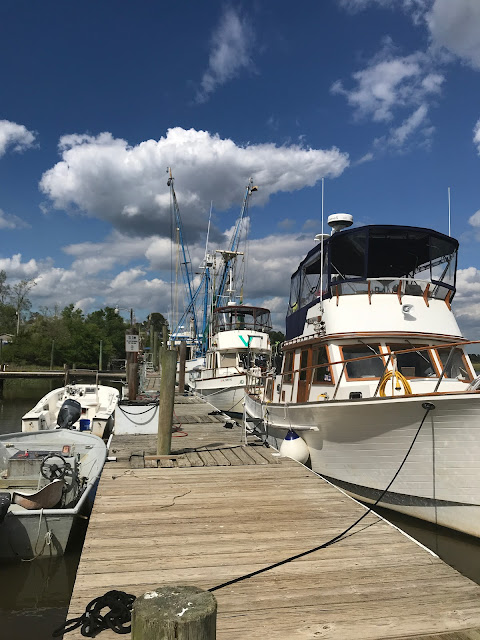 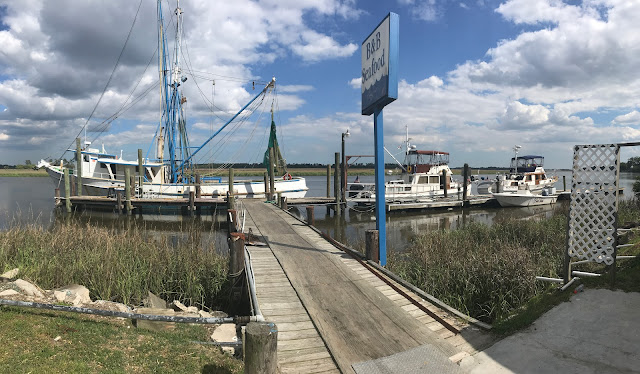 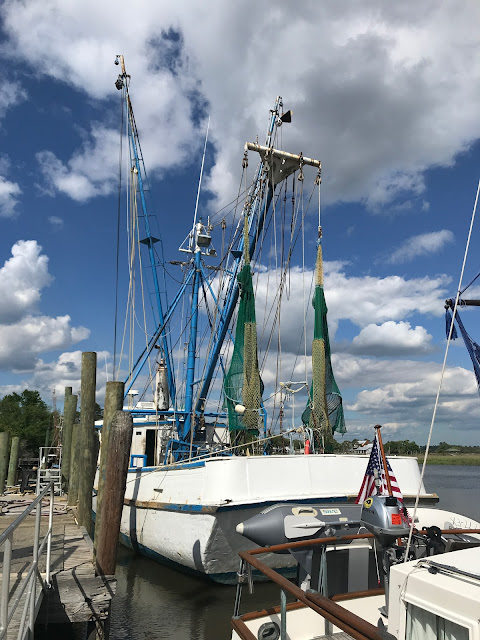