The thunderstorms that came through our marina last night put on a spectacular light show with the cloud to cloud lightning that produced lingering bolts that seemed to stay alive too long.  The rain came and the wind blew and Viridian mashed her fenders against the green pressure treated pilings that stuck up from the pier like fence post. Morning came clear and cool and the fresh rainwater glistened on the railing in the low morning sun.  It took some fancy maneuvering to get out of our slip along the face dock but the wind was in our favor this time and all we needed was for the bow to rotate 60 deg to port and off we went clear enough to maneuver with the rudder.

Today we went back out into the Pungo River and headed east in to the rising sun to enter the Alligator River Cut, a 20 mile ditch that connects the Pungo River with the Alligator River.  This stretch of chanel is made up of two straight line segments each about 10 miles long and it goes over the horizon when looking down it from one end.  The trees along the bank are the same ones you would see cruising the Tennessee River in Alabama and Tennessee.  Lush green new growth walled the stump filled banks of the cut and we passed sailboats being mindful of the narrow waterway and shallow edges.  The first mate spotted a huge alligator on the Alligator Cut.  It was by far the largest one we have seen since we began our trip.  I wasn't sure they were this far north but then why would the river be named for an animal that didn't live in it?  We also met a southbound commercial tug named "Island Girl", that was pushing a single barge loaded with gravel.  It looked like she was taking up the entire chanel as we passed on the "one".  Alligator Cut opened into the Alligator River that emptied into the Albemarle Sound, a HUGE body of water that we will cross tomorrow.

Our cruise today ended at the Alligator River marina just past the Alligator River Swing Bridge.  We noticed another Looper boat, Miss Norma, was already docked here.  She was a new, red, Ranger Tug and according to the names on the boat cards we exchanged their names were Tim and Ramie.

The three boats in our flotilla tied up to the face dock, bow facing out, and began winding down with a good supper and an episode of "Person of Interest" via the Firestick.

That's the new and here are some views: 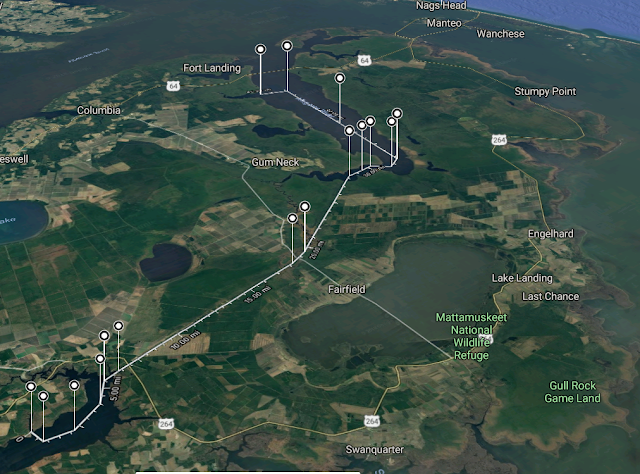 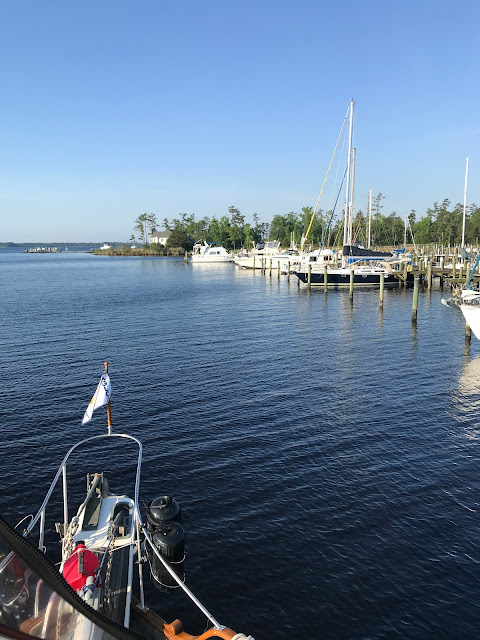 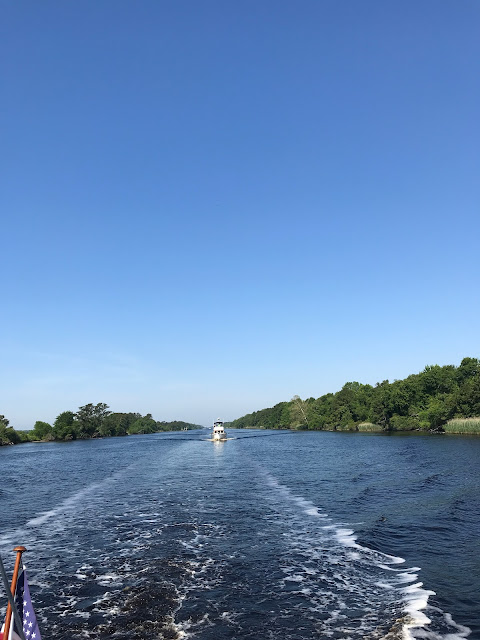 Looking back down the Alligator River Cut 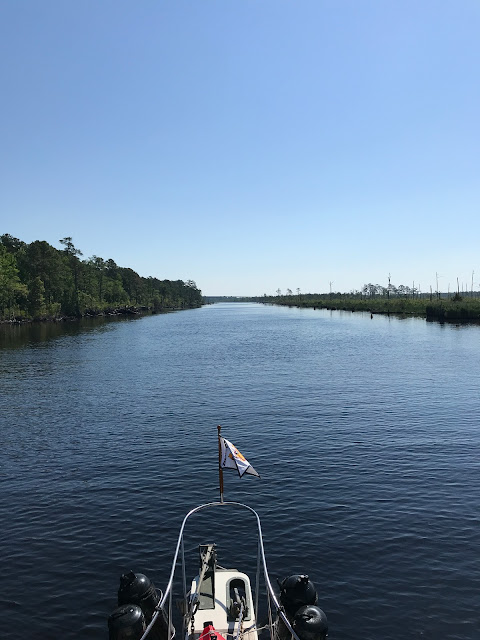 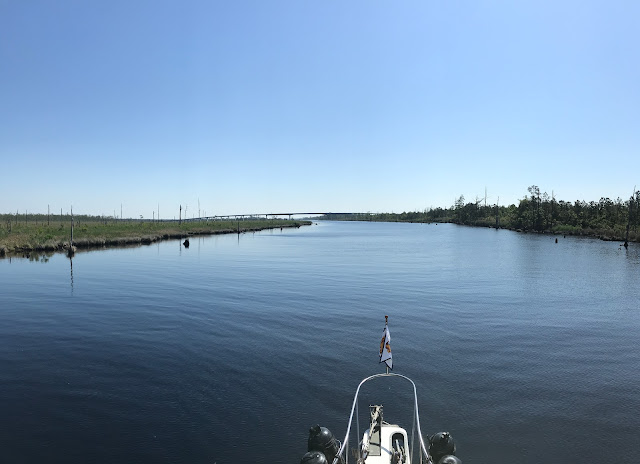 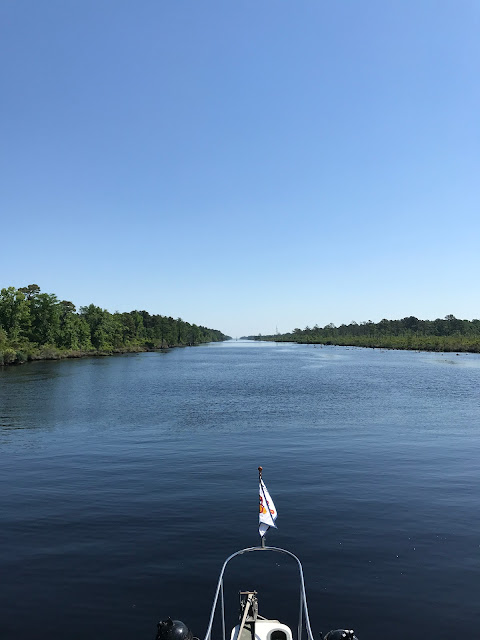 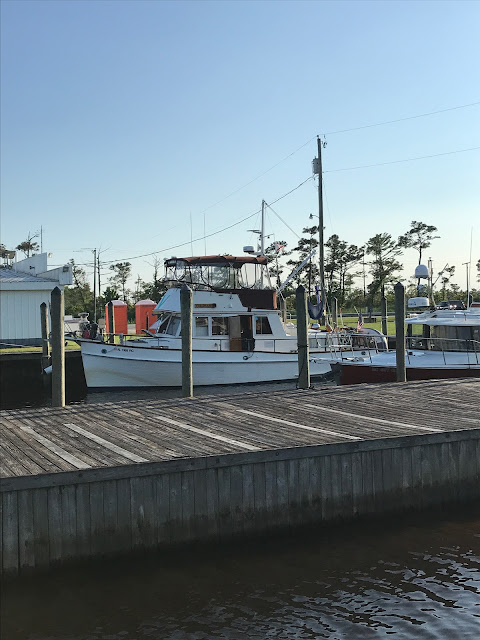 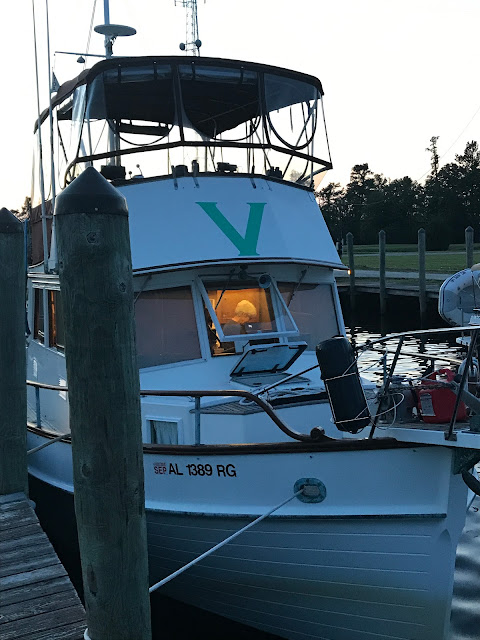 First Mate working in the Galley and sunset
Posted by George Sanders at 8:23 PM