The anchor came up clean this morning as we set sail at 7 AM to join up with Dash Away and Second Wave to make the 66 mile cruise to Beaufort, NC.  The Looper boat Noah's Arc pulled out of the anchorage behind Viridian and when we reached the AICW we had a four boat flotilla cruising north.  Since Viridian was the lead boat again we had the responsibility of route planning that included reaching basquel bridges, that opened only on the hour or hour/half hour, a minute or two before opening time.  If we got there too soon we would have to wait in the current and wind and try not to run into each other.  Get there too late, or miss the opening, we would be waiting an hour before it can open again.  Today there were three such bridges and we hit them just as they were swinging open and didn't break our stride.  One of the bridges was operated by the US Marine Corps at Camp Lejeune in Jacksonville, NC.  The operators at that swing bridge were known for and expected precision.  If a boat was 30 seconds late, too bad, you had to recycle.  We contacted this bridge 5 miles out and told the operator our ETA and how many vessels were in our group and requested an opening on the top of the hour.  We arrived at 11:59, one minute before opening time but didn't have to stop in spite of the painfully slow opening of the giant structure.  I believe they respected our ability to arrive on time and not waste their time.  You could hear it in their voice.

The briefing we received the night before was dog eared by time we got to Beaufort, NC.  One of the "trouble spots" was where the AICW crosses New River just south of Camp Lejeune.  There were red buoys everywhere.  Bring the first boat to arrive we slowed our pace and matched what we saw with what we had on our navigation charts and started for what we thought was the next red buoy to take us across the river.  We realized too late though that we had gone out of the channel toward the wrong buoy and swung around too late to avoid grounding.  Viridian didn't stop this time and power was added so we bumped and skipped across the sand bar below until we finally dove in to the deeper channel water and were floating again.  The following boats saw our misfortune and were able to identify the correct red buoy that marked the AICW path.  It turns out that several boats have made the same mistake and wound up grounded.  We have seen a lot of buoy combinations but this one was certainly the most confusing one.  The good news is now our sonar works better since the bottom was sanded clean.

Our cruise took us from Topsail Beach and through Surf City and just to the south of Camp Lejeune.  BTW, the crew of Second Wave had to call Camp Lejeune to make sure there were no "live fire" training exercises being conducted during the time we made our run through their world.  Had there been exercises going on, we would just have to wait for who knows how long before being cleared.  Once safely past Lejeune, the parade of trawlers passed Sea Turtle Sanctuary on the way to Hammocks Beach SP.  We skipped across Bogue Sound past places like; Emerald Island, Pine Knoll Shores, Atlantic Beach and Morehead City.

Once in the Beaufort area the fun really began.  There were boats of all sizes and shapes running around like a stirred up ant bed and churning the water like a mixer.  Radios in each hand and driving with our knees we had to contact both the drawbridge  operator and the marina at the same time as we swung 180 deg around number "4" sea buoy in the Beaufort Inlet Sound while commercial sport fisher boats generated 6 ft wakes heading out to sea and local boaters buzzed around like mosquitos.

The dock hand at the marina was overwhelmed with the arrival of boats and now he had to deal with 4 large cruisers all coming at the same time.  The bridge didn't open till the half hour but we still made it there at 2 minutes before opening time at 3:30 PM. While all this was going on the first mates of Viridian and Second Wave made phone calls to the marina to get slip assignment and navigation instructions for finding them.  Our marina was just one of 4 marinas in the same pool.  It all looked like one giant marina to us.  We finally spotted a man waving his arms on the dock and we followed his hand motions and radio instructions and backed stern first in our slip and tied it up to the dock.  The other boats got in and we all were pretty exhausted after a long day of "Pleasure Cruising" in the State of North Carolina.

It was only 4 PM so we walked into town and saw what was left of the wooden boat show on main street.  We found a restaurant on the board walk by another marina and ordered dinner with other looper friends and had a relaxing evening walking back to the boat as raindrops fell into our ice cream cones and the smell of rain was in the air.

That's the news and here are today's views: 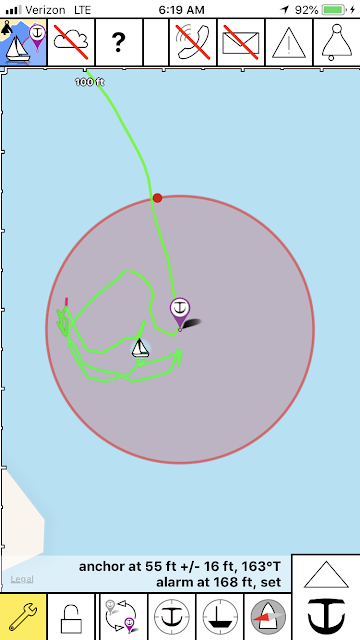 Testing out the new anchor drag alarm app.  You can see where Viridian moved with the tide and wind during the night.  If our anchor dragged and the boat went outside the circle then the alarm would sound. 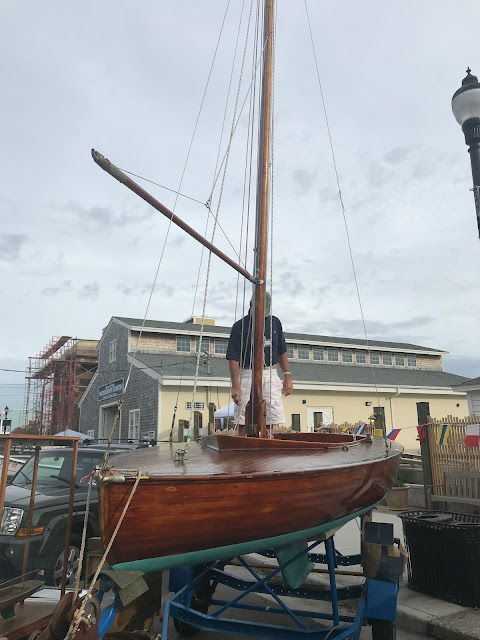 A few pics of the Wooden Boat Show that was ending just as we arrived. 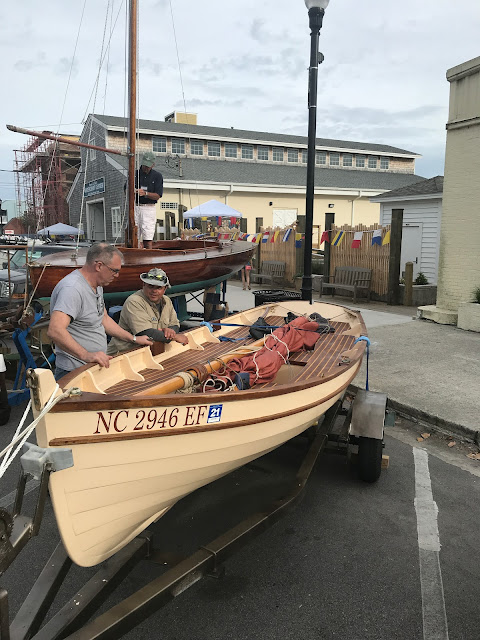 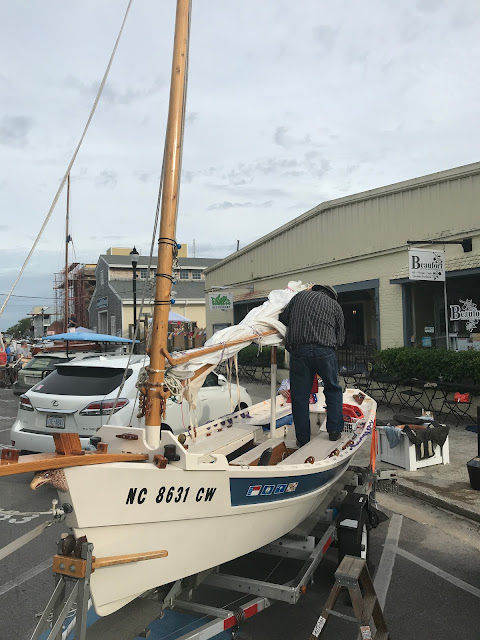 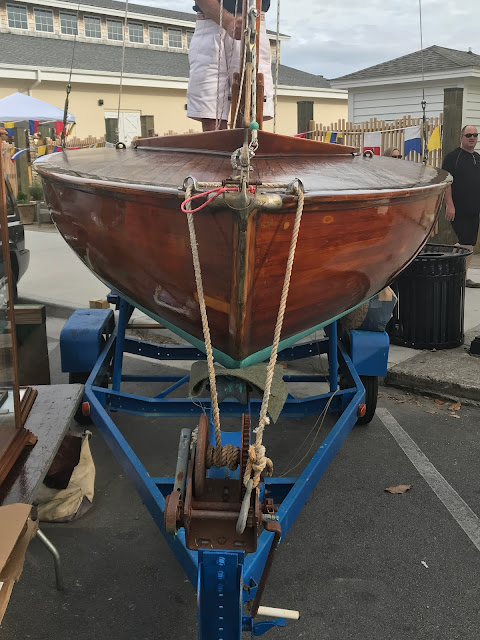 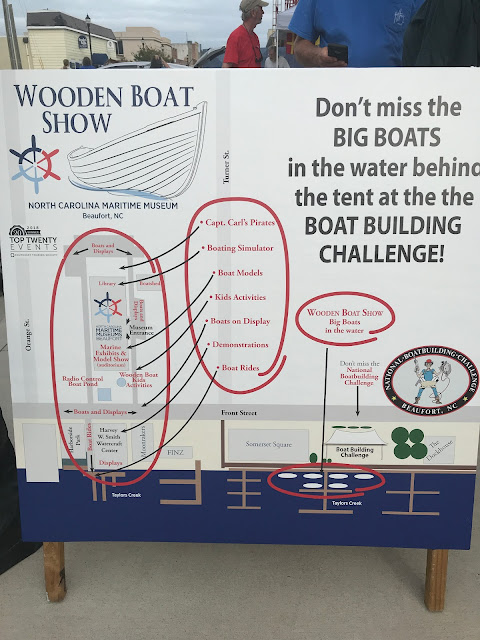 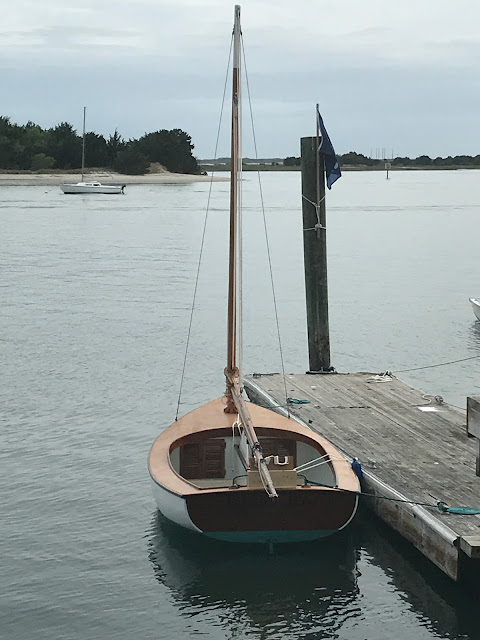 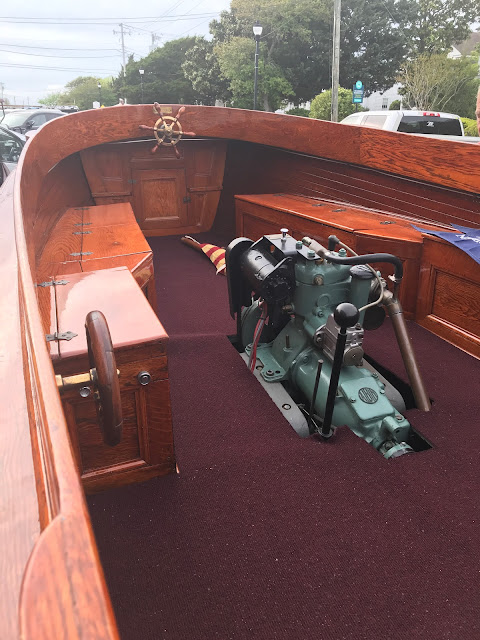 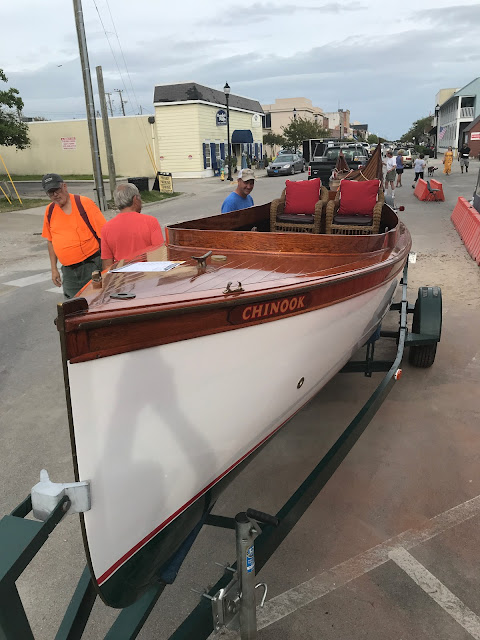 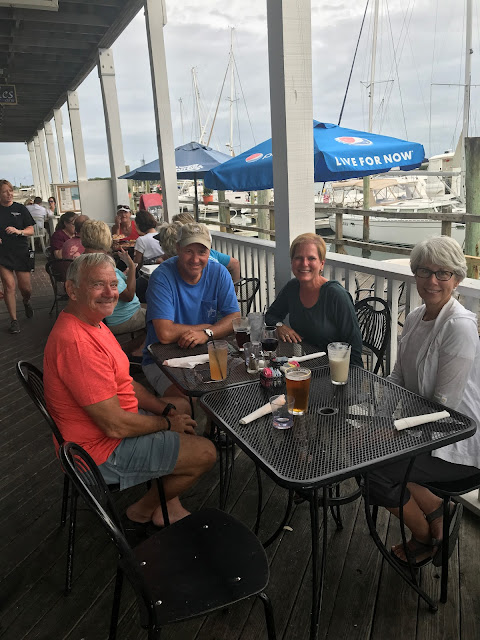 Dinner with Mike Dash Away, Brent, and Karen Second Wave

Posted by George Sanders at 9:19 PM