Viridian stopped by the fuel dock at Southport marina where she was topped off with diesel fuel, had the holding tank pumped out and  a slip was assigned in the harbor behind the Ships Store.  Once we got settled and ate lunch we put on our cleaning clothes and got to work on swabbing the decks, cleaning windows and vacuuming the inside.  So, the time spent at Southport, NC marina was mostly used washing Viridian and removing the brown mustache that stains her bow.  The salt crystals from the spray, when dry, were visible over the entire upper structure and so it needs a good cleaning every now and then so we scrubbed and cleaned the whole afternoon.  At 5 we joined Second Wave for Doc Tales on board their boat until 6 and then attended a weather and route briefing that covered the approaching cold front and the trouble spots in the AICW from Southport, NC to Norfolk, VA.  The briefing was given by a retired Navy meteorologist who is also a cruiser who has been up and down the AICW many times.  This was valuable information and we used his notes to plan our next 200 miles.

We seem to have settled in with a couple of very capable Looper cruising buddies who have the same timeline we do for getting to the Chesapeake.  Although we don't do "timelines" per se, we do have a mental agenda of where we want to spend our time.  Between here and Deltaville, VA are great cruising grounds but little in the way of interesting places we care to linger so we pass through putting miles behind us but thoroughly enjoy the scenery along the way. We have worked well together over the last several days by dividing the tasks of getting from point A to point B into roles that check and double check our position in the AICW, timing of tidal influences, and timing of reaching lift bridges so we don't all jam up in the swift current waiting for the bridge to open.  We are pretty much out of the 7-8 ft tides we saw back in GA and SC.  Now we deal with 2-3 ft tides but the current is still a factor because of the volume of water moving in and out of this region.  River boat traffic seems to have picked up now that we are in populated areas and the boating season is kicking into full swing.  We are expecting some weather from a passing cold front this weekend so we will find a marina in Beaufort, NC to hide till it passes. BTW, Beaufort, SC is pronounced Bew-fort and Beaufort, NC is pronounced Bo-fort. It is important to the people that live in these two cities that we use the proper pronunciation.

Our route took us 30 miles north up the Cape Fear River and into Snows Cut at the Carolina Beach State Park.  Past the Carolina Beach Inlet the chanel runs north under bridges and a couple of lift bridges.  We squeaked under Figure 8 Island Bridge with only a foot, more or less, clearance.  (That was a whole other story).

We reached our anchorage today at Topsail Sound with the Loope Boat Noah's Ark.  Dash Away and Second Wave stopped in a nearby marina.  Our fresh water pump has been making noises lately so an inspection showed the drive belt was loose and was jumping teeth.  Thankfully, these pumps have an adjustment screw so that the belt can be tightened and now it is working quietly again.

That's the news and here are some views. 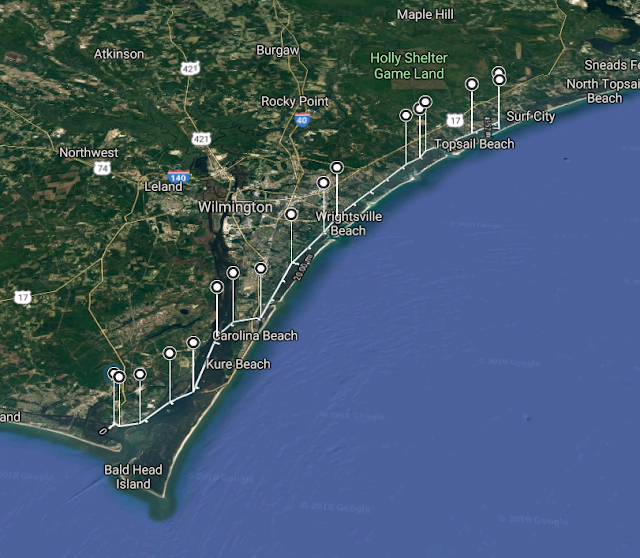 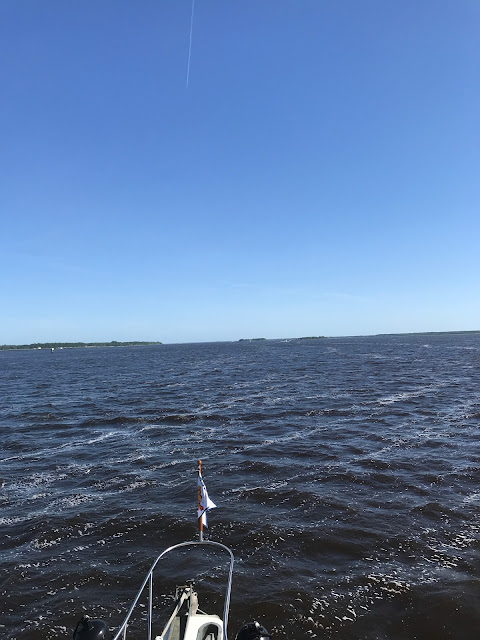 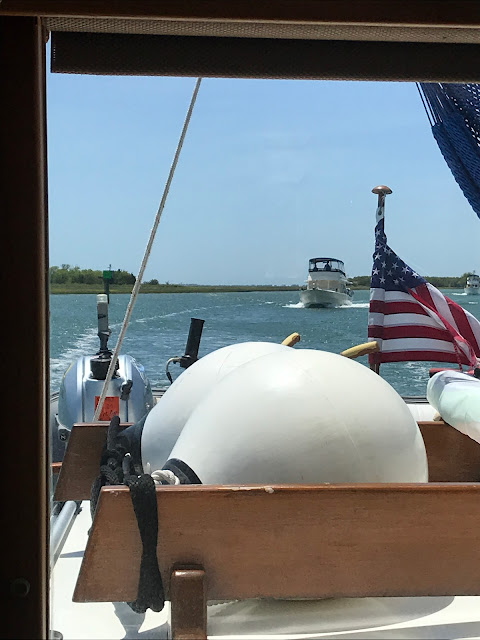 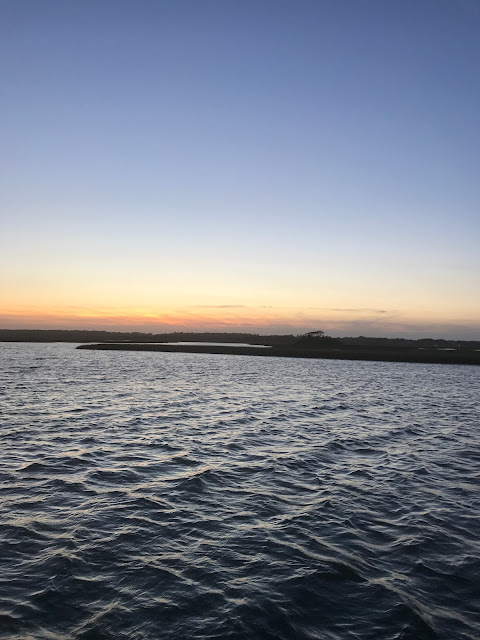 TIme to turn on the anchor light
Posted by George Sanders at 7:27 PM