Fog was predicted in the Delaware City area this morning but at first light it was calm, cloudy and humid but so sign of fog at the marina or out in the Delaware River.  The marina personnel provided a weather briefing yesterday evening that predicted better than usual crossing conditions as far as the winds, current and waves were concerned so we just needed enough visibility to get out of the harbor canal and we had it today.

The Delaware Bay passage is another big water event that must be taken seriously.  Careful planning and using the latest weather information to make a go no-go decision is the first step.  Talking with locals and getting their input is a bonus if you can get it.  At the end of the day, no one who navigates these waters will tell you what the wind speed or wave height will be on a given day because experience shows that Noaa doesn't even know and that's the source of all weather data and "expert" analysis comes from.

For this particular day, all the signs indicated good cruising conditions all day.  The current was in our favor for the River section in the morning and once into the big waters of the Bay the wind would be light and from the southwest.   The earlier we started the longer we had current with us so at 0600 we dipped the nose of Viridian into the 2  mph current running along the dock and carefully moved out of the marina and into the Delaware River to find our channel markers that would take us south to Cape May, NJ.

As soon as we got settled in with a speed of 11 mph, thanks to the current, we noticed a fast moving (18 mph) tanker ship coming up from behind and would be passing us in the channel soon.  Looking back I could see the steel bow towering above the Dash Away and Second Wave trawlers and pushing a huge bow wave.  The ship's captain didn't answer our calls but it was clear that we had plenty room both in and out of the channel to simply get out of the way and that's what we did.  The tanker moved past us and soon she was just a gray shape on the horizon before disappearing completely.  We met some north bound tankers and several tugs as we sped south through the smooth waters of Delaware Bay.

The last 20 miles of our 62 mile passage took us out of the channel and made a bee line to the mouth of the channel on Cape May, NJ.  The water is deep all the way in so we turned southeast under thinly overcast sky and settled in on our new heading.  The water was smooth like a sheet of cellophane had been laid over it keeping it contained.  The horizon looked white and hazy and soon we were in a thick fog bank that cut visibility down to less than 100 feet at one point.  We slowed down and used our instruments to navigate and look for other boats using radar and IAS.  No other vessels could be seen but soon the fog thinned and we went back to cruising speed.  By the time we got within 5 miles of Cape May the sun came out and land was in sight just in time to make our approach to the Cape  May channel that took us to Utsch's (pronounce "Hutches" without the H)  marina.

The three boat flotilla (now known as the "Band of Bandits") was directed into their assigned slips and tied secure.  After checking in and eating a light lunch, a nap was calling and a few hours later we were conducting a recon ride on our bikes to get oriented in the historic town of Cape May.  Tomorrow we will do some exploring and provisioning because Sunday and Monday the weather is predicted to turn unfavorable for cruising or anything else. 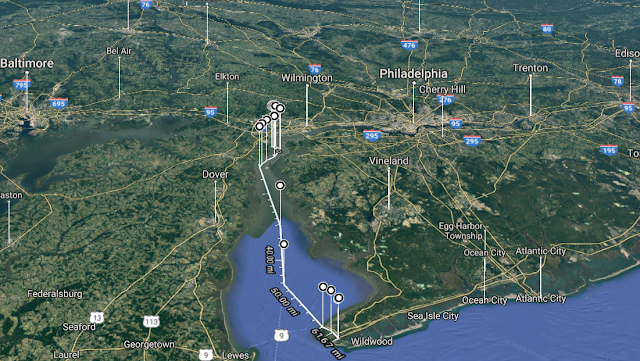 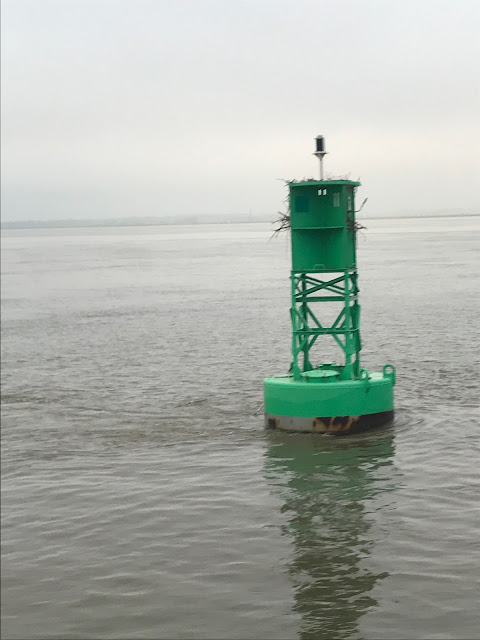 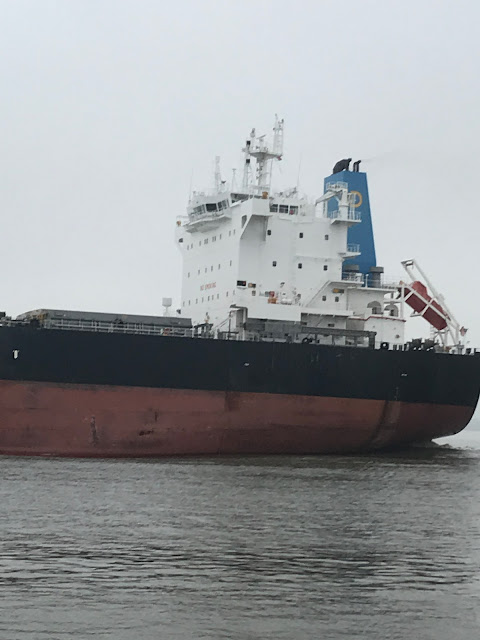 Phone Photos just don't capture size and distance.  This is a 100,000 ton vessel on a huge body of water moving about 20 mph but in the photo it just looks like a thing. 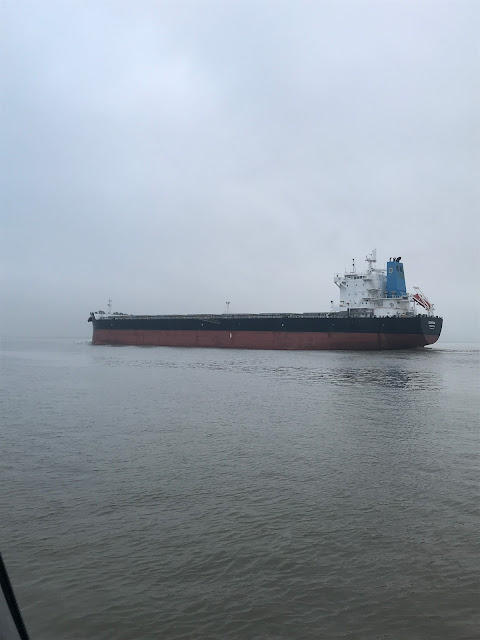 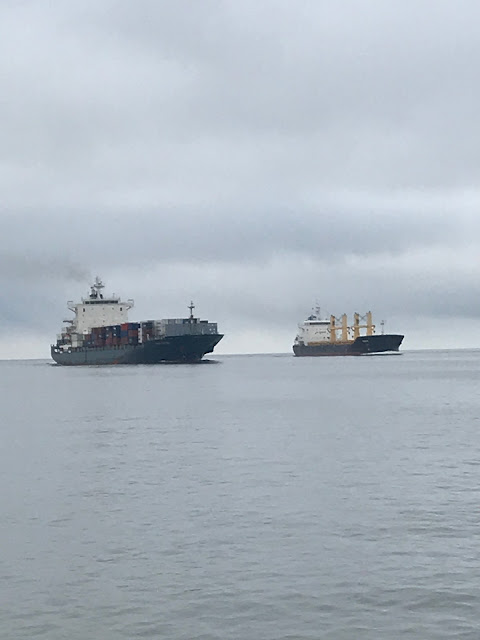 Northbound tankers in the shipping channel 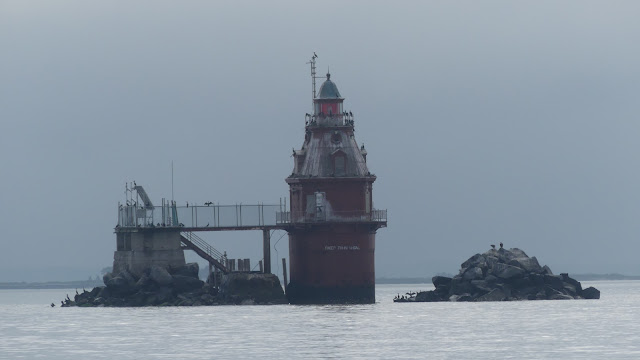 Ship John Shoal Light House, named after the captain that found the shoal by running aground on it in 1797 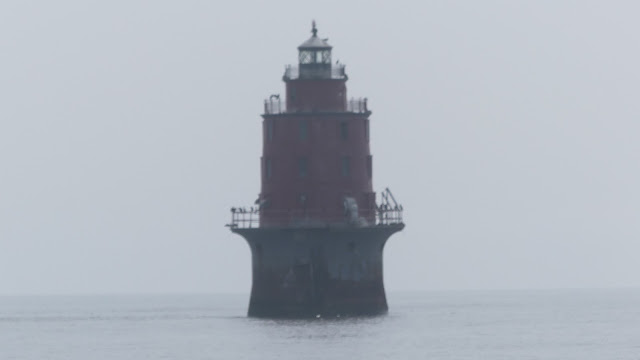 Miah Maull Shoal Light - The name of the shoal commemorates Nehemiah Maull, a river pilot who was drowned in 1780 when the ship in which he intended to sail to England in order to make a claim on an inheritance was wrecked on the then-unnamed shoal. 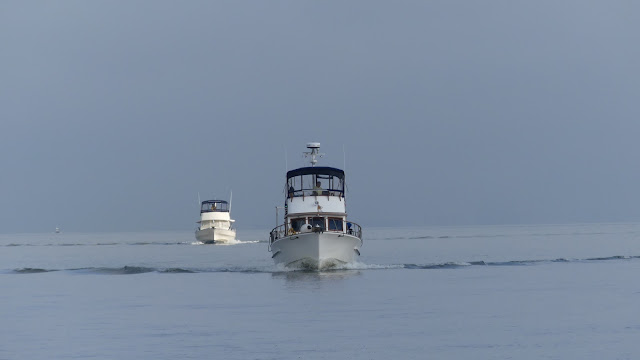 2/3's of the "Band of Bandits" pushing through the haze 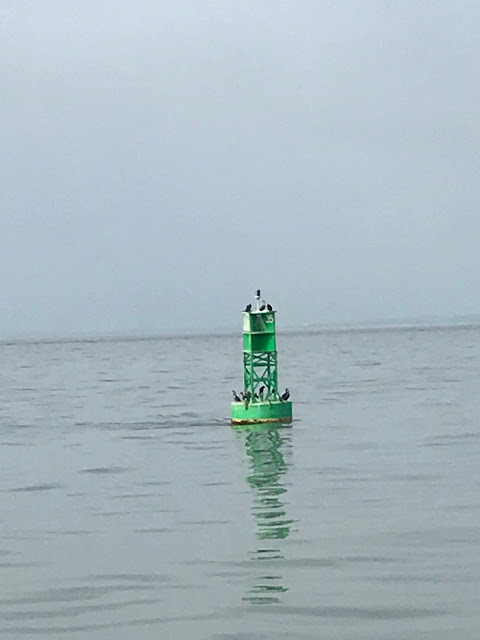 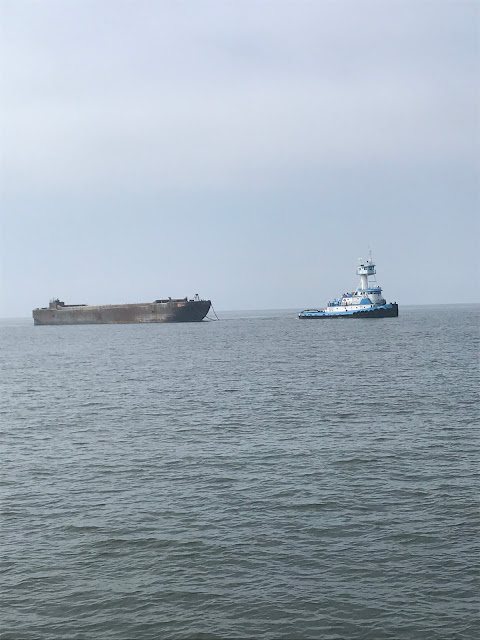 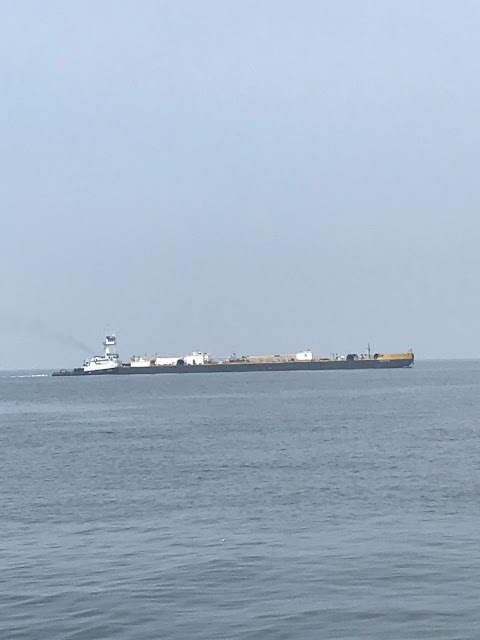 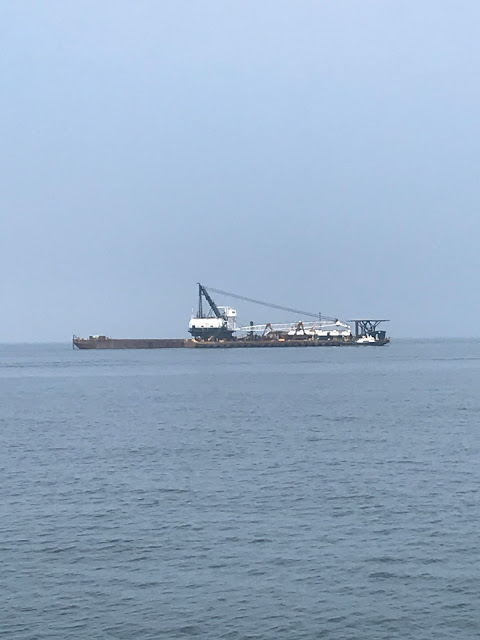 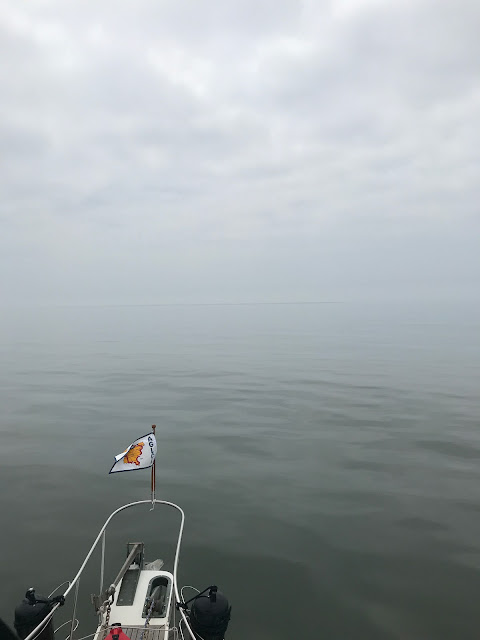 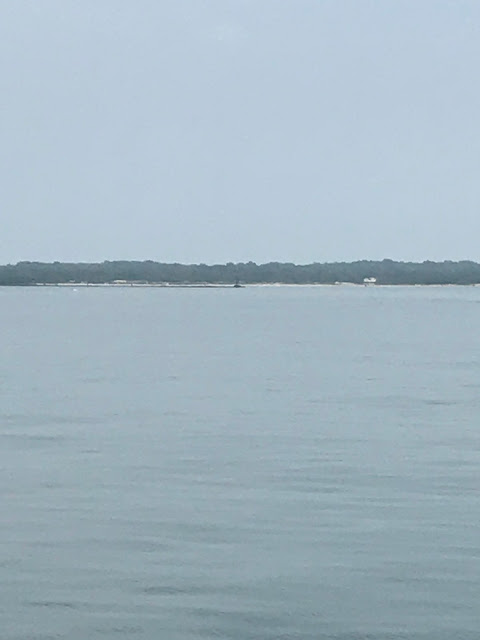 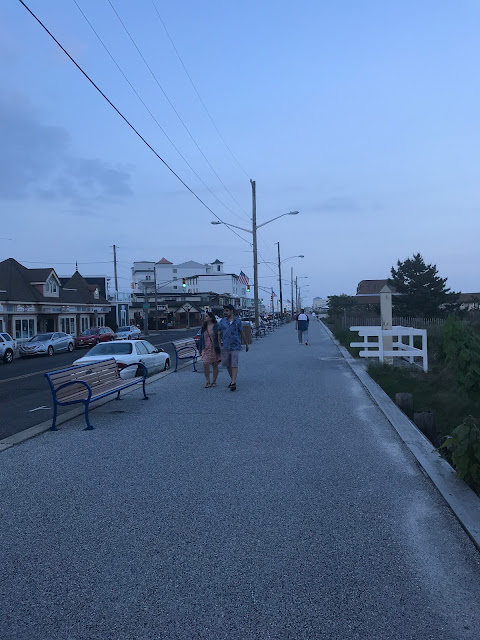 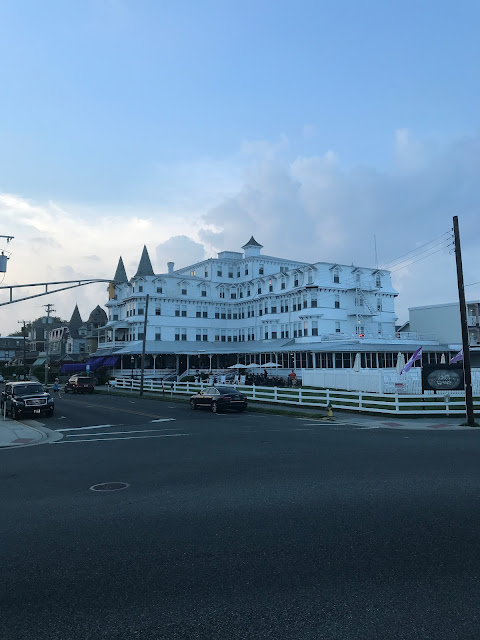 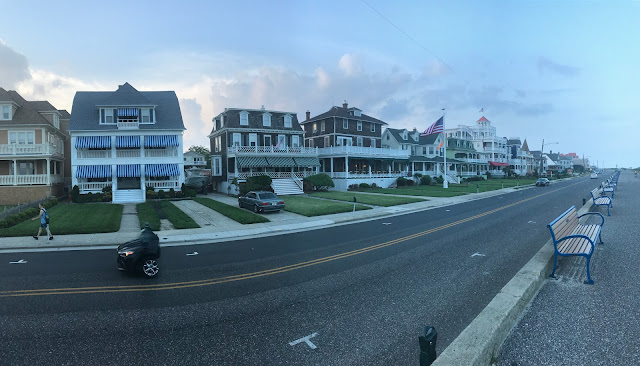 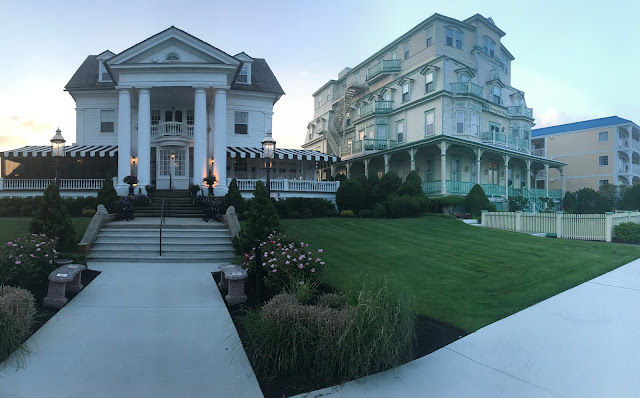 Tomorrow we hope to spend time taking in this beautiful town.
Posted by George Sanders at 5:08 AM

Email ThisBlogThis!Share to TwitterShare to FacebookShare to Pinterest
Labels: Destination - Cape May, NJ