Hankering for an Anchoring, Island Hopping and Hunting the Inuksuk

Leaving Parry Sound City Docks was just a matter of untying the lines and hanging on due to the fact we were on the leeward side of the concrete finger dock.  The forecast was for winds to be from the west at less than 10 mph but they were wrong.  It was a bit higher. The good thing was that we were cruising directly into the wind and the ride was smooth for the 5 mile crossing of Parry Sound and into the island channels.

Once we got into the narrow channels behind tree covered barrier islands, we were mostly shielded from the west winds whipping up the Georgian Bay.  Our path took us through narrow, deep channels between rocky islands covered in evergreens. Some of the channels, like Canoe Channel, was just wide enough to get our boats through. Our 29 mile cruise ended in the relatively calm Hopewell Bay anchorage, a popular place with mud bottom and protected from all winds except from the south.  The wind will be from the west for the next few days so we are in a good place to spend the night.

The crew of Miss Norma stayed at Parry Sound Marina for some extra R&R and Viridian found herself once again in the lead boat position.  Dash Away and Gypsy Spirit dropped a hook with Viridian in Hopewell Bay and swung in the slightly diminished wind till the sun went down.  The air was a cool 65 degrees and the wind made it feel cooler.

Today's passage took us from Parry Sound City Docks, 5 miles west across Parry Sound, a turn to starboard around Killbear Park and into St Aubyn Bay, past Gowar Bay into Jacknife Harbour that lead to the very narrow Canoe Channel.  After a deep breath and exhaling slowly, we picked our way between the dancing channel marker buoys alongside exposed granite boulders and islands that kicked up spray from the stiff wind coming across the path. Once behind Frankland Island the wind died down and we could enjoy calm cruising while we made our way north through Shebeshekong Channel past Loon Island and into the Narrows Island pass.  A turn west around Galna Island put us on a long smooth course that bent north around Twin Sisters Island and into Shawanaga Inlet.  A few miles further and we eased to port around Jane Rock and into the Hopewell Bay for a night on the hook.

Jazzy the dinghy was lowered, the honda engine was attached and the crew of Viridian buzzed off to explore the inlets, islands and canals all around the Hopewell anchorage.  We motored through shallows and up streams until we were stopped by beaver dams.  Back out into deep water, after untangling the reeds from the prop shaft, and passing several Inuksuk sightings, we  made our way to a large granite island.  After relaxing in the sun on the warm stone beach,  we motored back to Viridian and grilled pork chops for supper.  Later after the sun had set, we listened for the call of the Loon on Hopewell Bay.

That's the news and here's the views 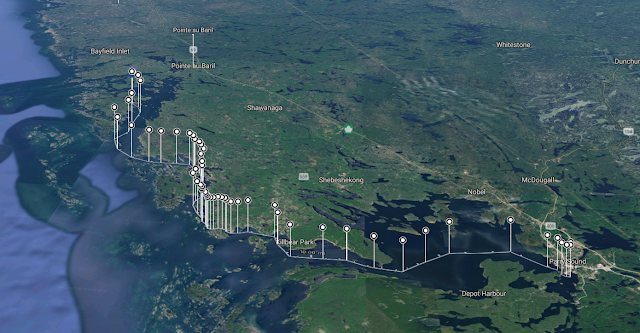 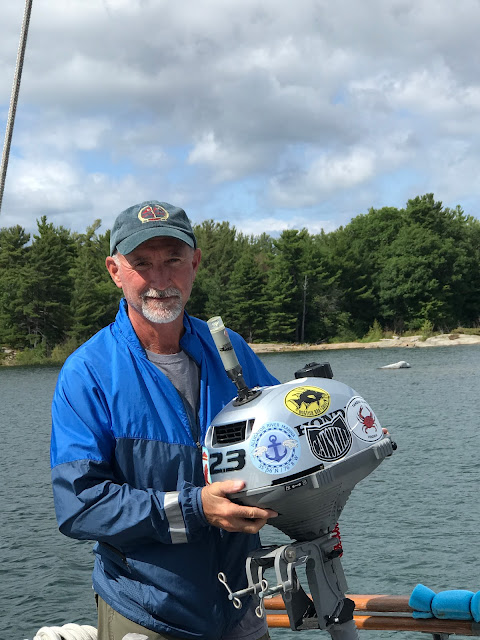 Getting Jazzy ready for adventure 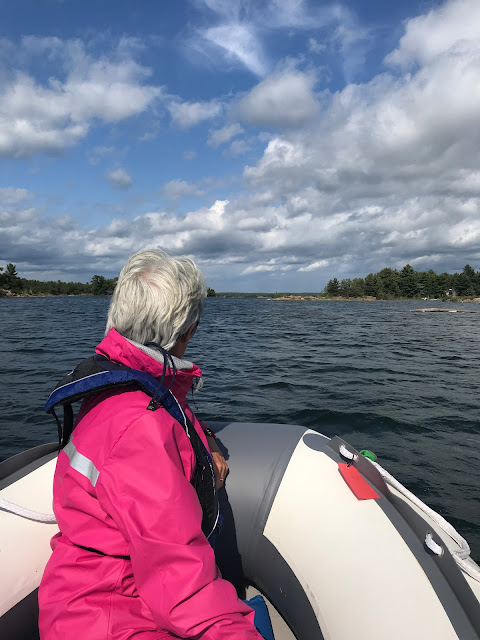 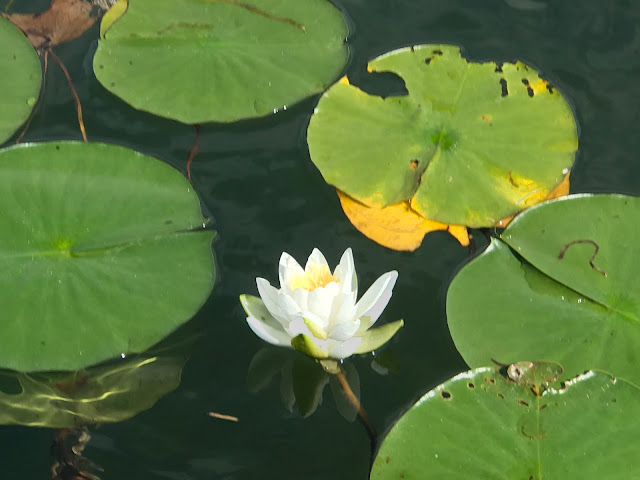 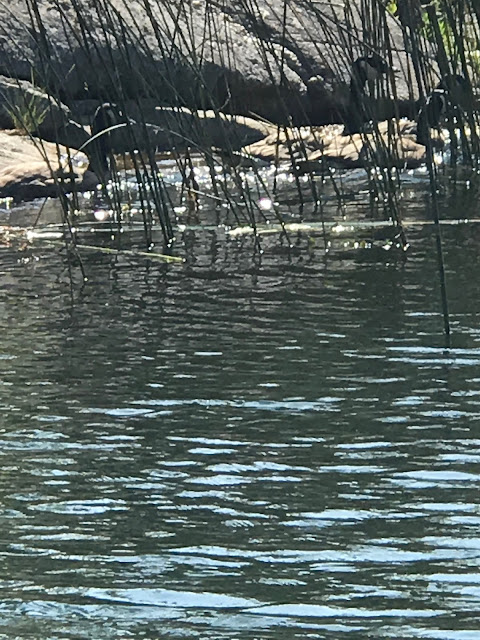 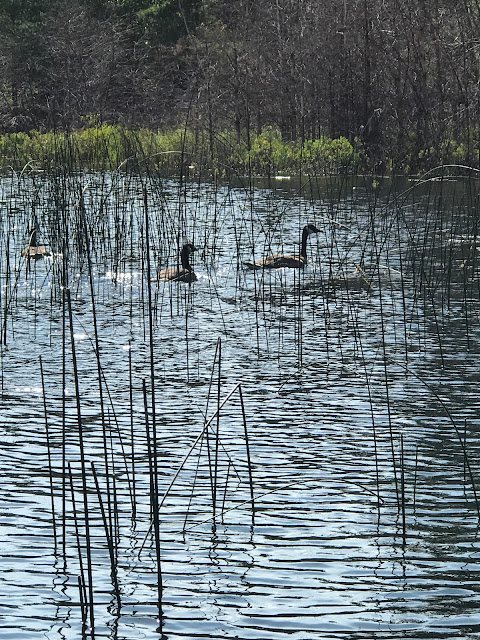 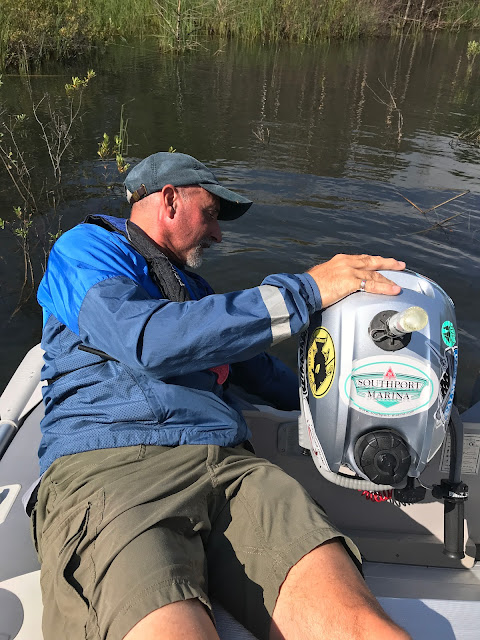 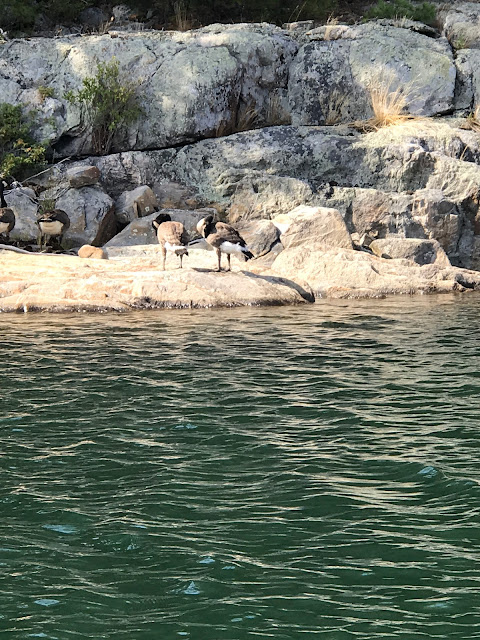 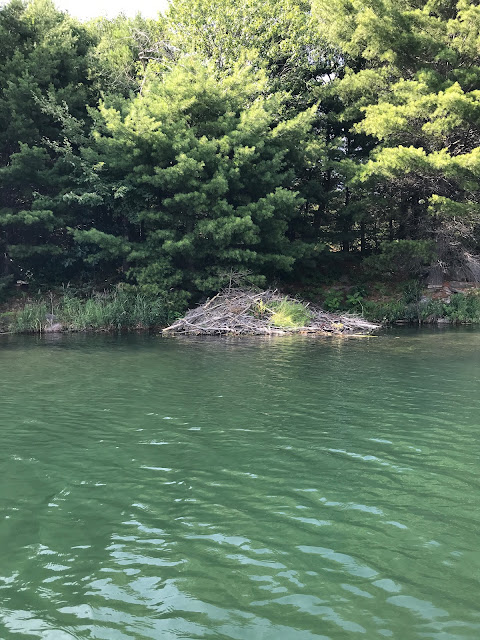 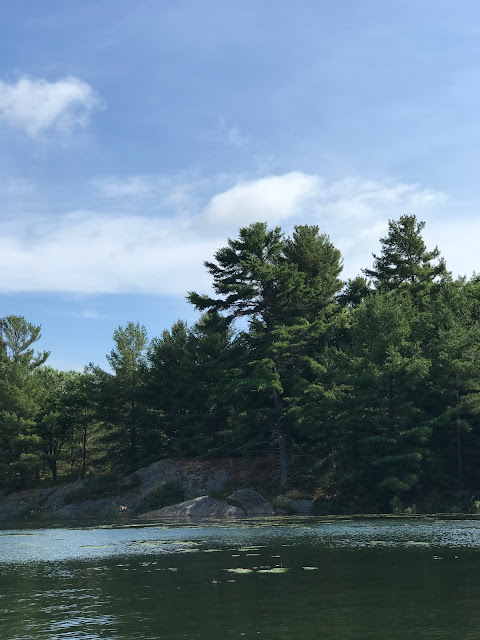 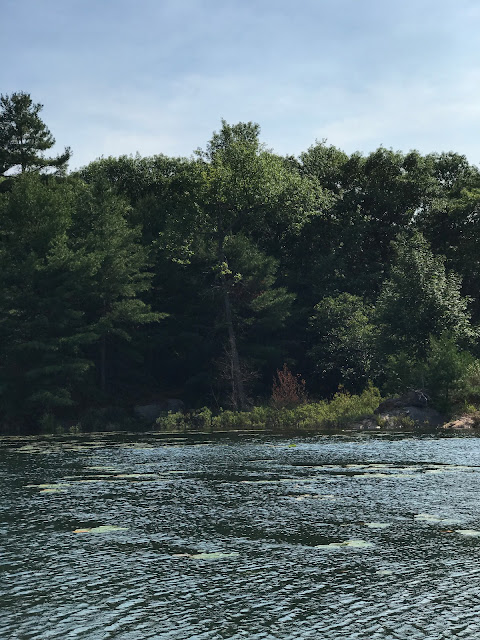 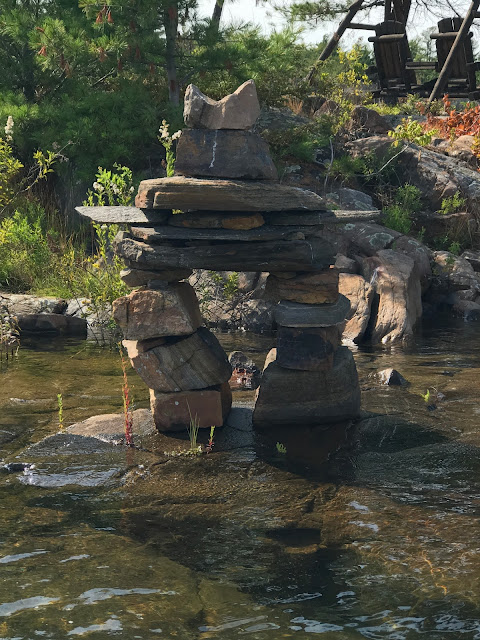 One of several Inuksuk markers 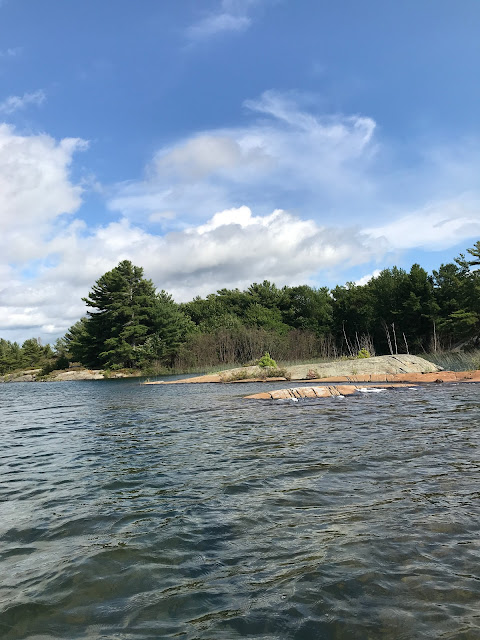 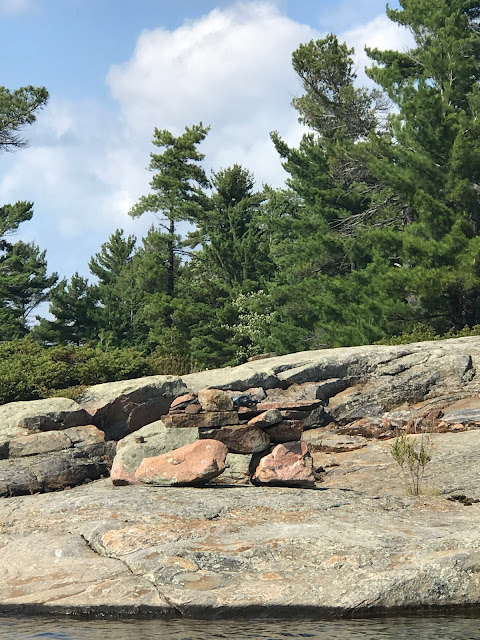 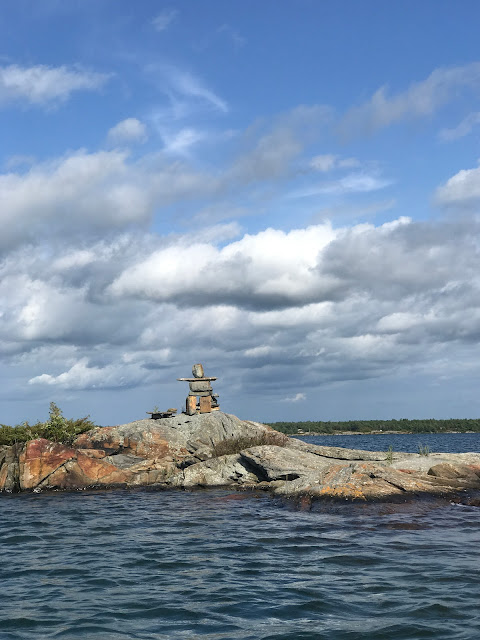 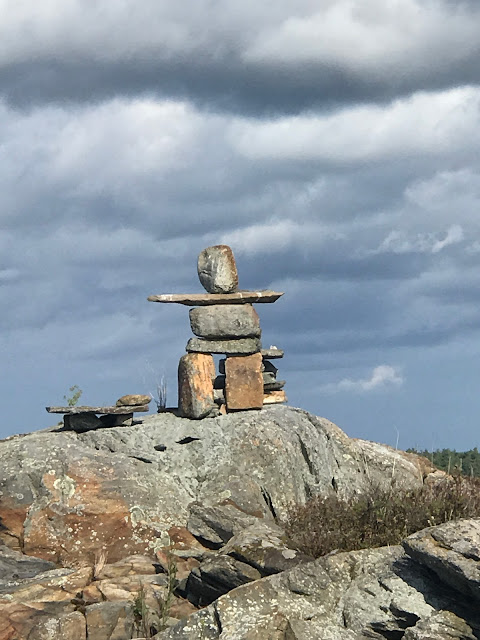 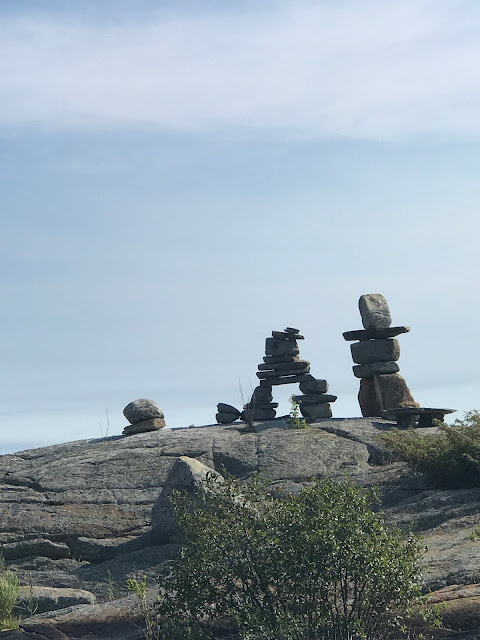 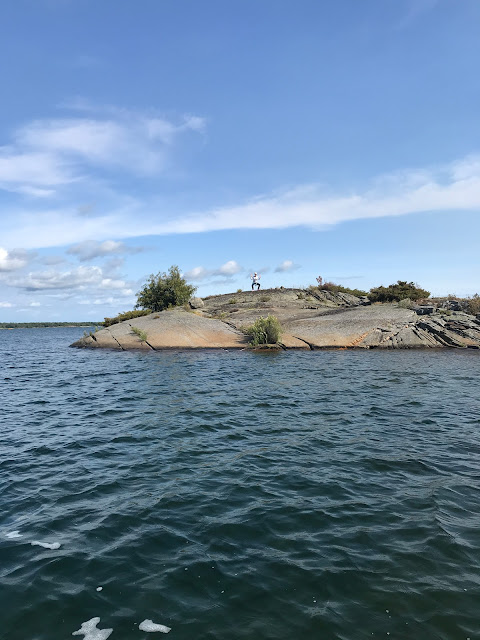 What is that on the island? 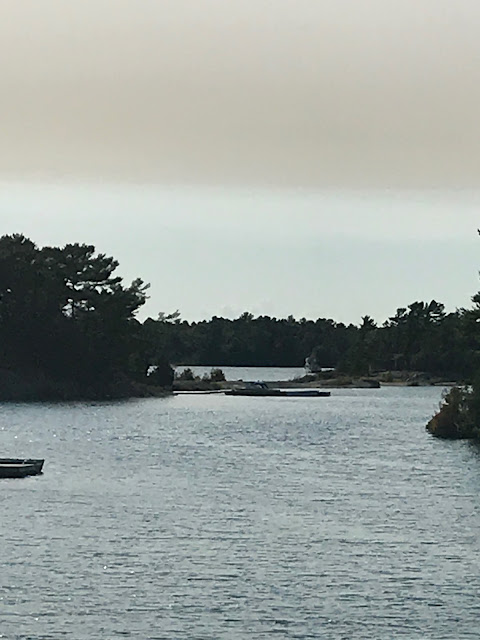 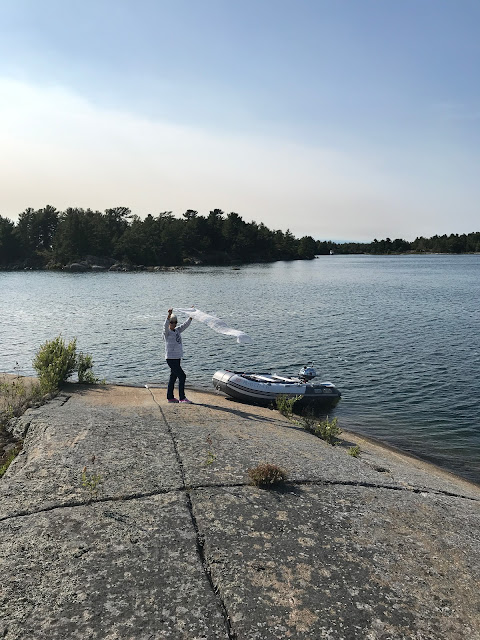 Landing on our private island :) 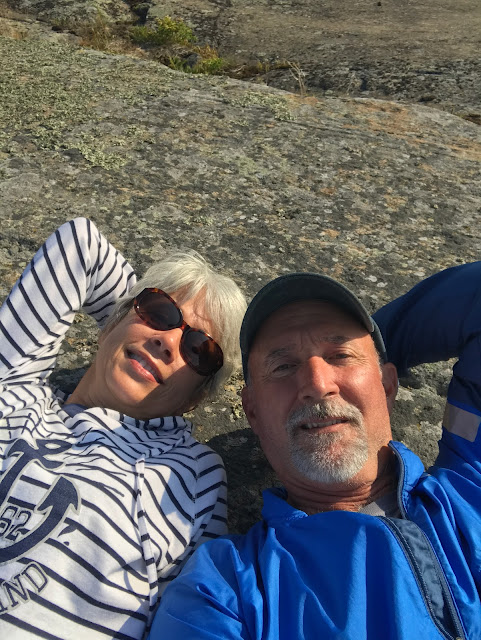 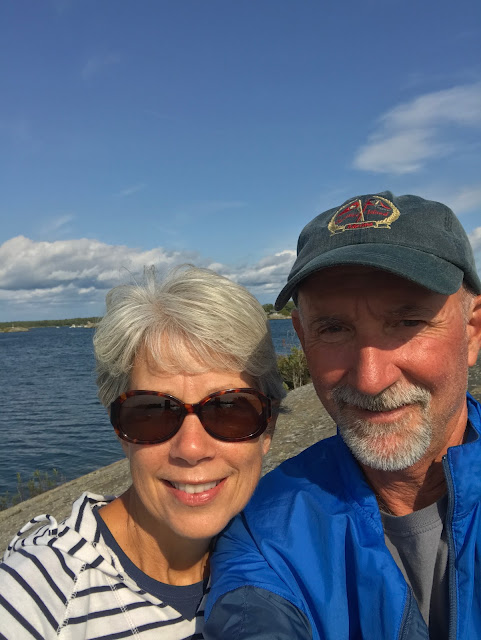 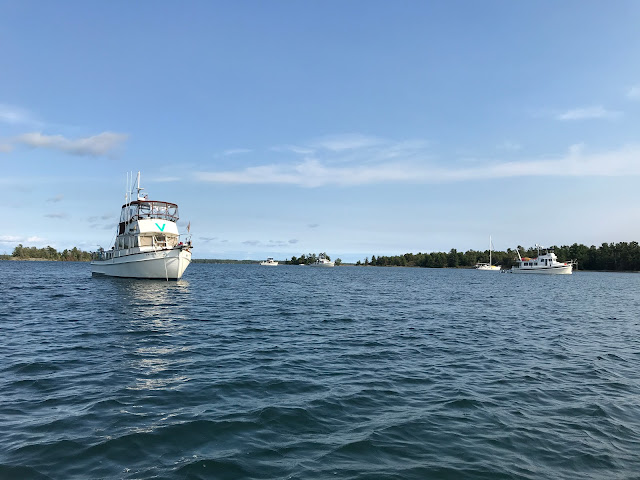 Viridian at anchor in Hopewell Bay in the Georgian Bay, Lake Huron, Canada
Posted by George Sanders at 2:49 PM