To Lock 34 at Fenelon Falls Ontario

Once the wave action from local weekend boat traffic settled down off Big Island the water flattened out and became like a giant mirror.  The four Looper boats, rafted in pairs, sat perfectly still all night with anchor chains hanging straight down.  The morning sunrise had a tint of red indicating possible weather approaching but made for a fabulous sunrise.

The Looper boat Dash Away was rafted to Viridian and it was time to start engines and head for Fenelon Falls.  Pushing the start button on Dash Away produced only the sad, last gasp of a dying battery.  Running the generator didn't help the situation but fortunately, a pair of 20 foot long jumper cables were found onboard and they were just long enough to reach Viridian's 8D starting battery and the Perkins Diesel roared back to life and once we got our anchor up the four boats were cruising for the first of two locks on the way to Fenelon Falls.

We are staging our cruises to position ourselves for a good weather day to go across Lake Simcoe.  This lake is large enough to become very uncomfortable in wind greater than 15mph, which is forecast for 17 July.  Some easy days and a two night stay at Fenelon Falls Lock will allow for a good crossing on 19 July, assuming the forecast holds up.

The red morning did bring some weather.  A severe thunderstorm warning was issued for our area starting at 1300 today.  We were scheduled to arrive at Fenelon Falls Lock at 1200 but not sure we would be able to get a spot on the wall since all the other boaters were staying put for the coming storm.  The sky became overcast and we could see large thunderheads building in the west as we cruised on the calm waters of Lake Sturgeon around Sturgeon Point.  The canal leading to the lock was narrow and twisty but deep and interesting as we passed all kinds of boat houses and homes lining both banks.

There was just enough room for three boats on the lower wall of Lock 34 so there were boats waiting on the "blue line" to lock up.  Viridian waited to see if room could be made on the transient wall but it was too small once all were docked.  Dash Away had to get tied up because there was a  high probability that she wouldn't get started again if shut down.

The blue line wall cleared and we contacted the Lock Master and asked if we could tie up on the blue line wall while the storm came through.  It was Noon and the lock didn't close until 1700 but under the circumstances they made an exception and we were allowed to tie up until the line of thunderstorms moved through.  One boat left and some others shifted on the transient wall and Viridian was able to make a U-turn and tie up opposite the blue line and all is good.

No other boat traffic came through the lock this afternoon but the sun did come out long enough to walk into town and get some needed items.  We worked on Dash Away and got her healthy enough to continue until a new battery could be installed and worked up a good appetite for the Chili & Rice Special that Meg and Tim whipped up.

Supper was dished up onboard Gypsy Spirit just before the second wave of thunderstorms rolled in but we were comfortable in the salon of Gypsy Spirit, a 42 ft Nordic Tug, with its generator running powering the A/C and other things.  We enjoyed another great home cooked meal and listened to interesting stories of  travels and experiences of times gone by.  This is what Looping is all about.

That's the news and heres some views: 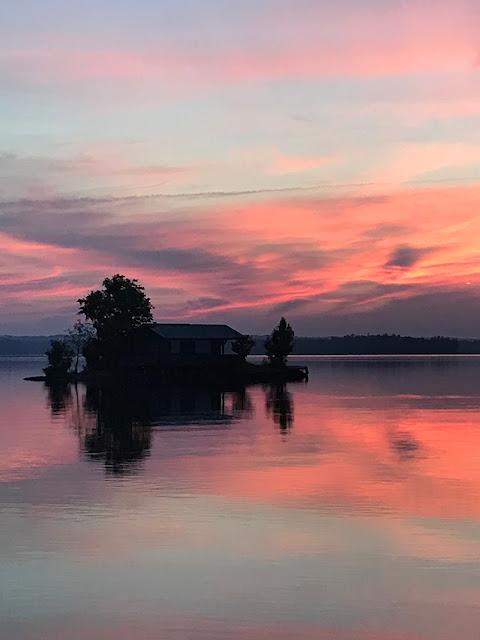 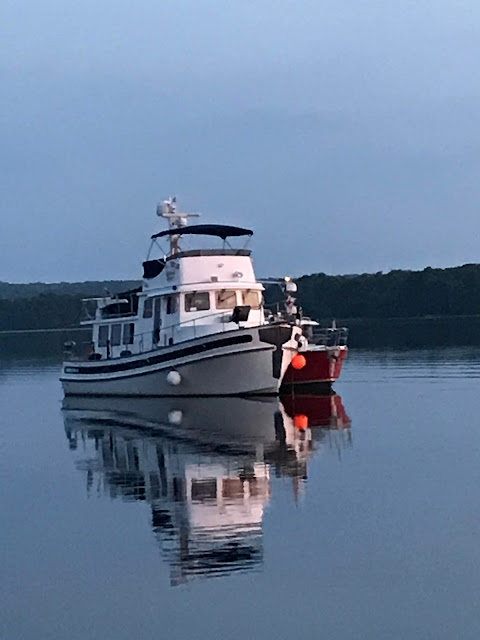 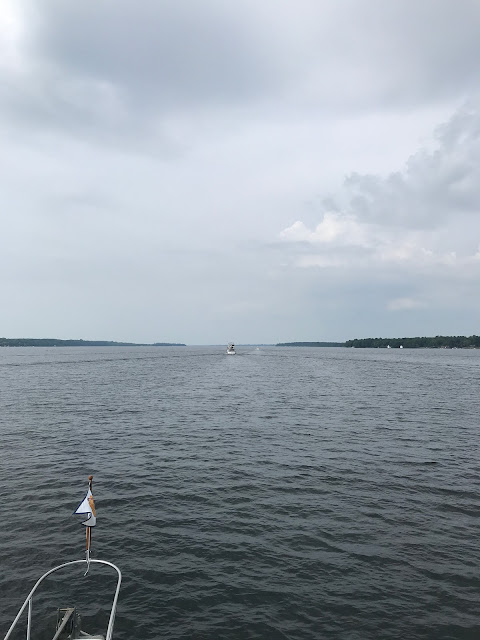 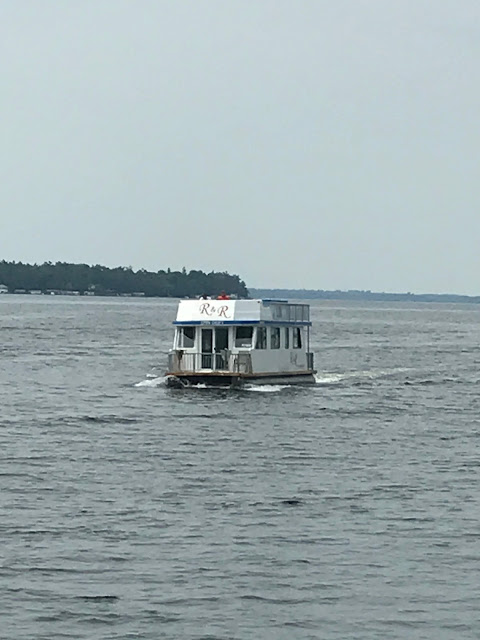 There are rental boats everywhere. We give them a wide berth.  They have a reputation of being driven by inexperienced and/or intoxicated captains so we were advised to BOLO! 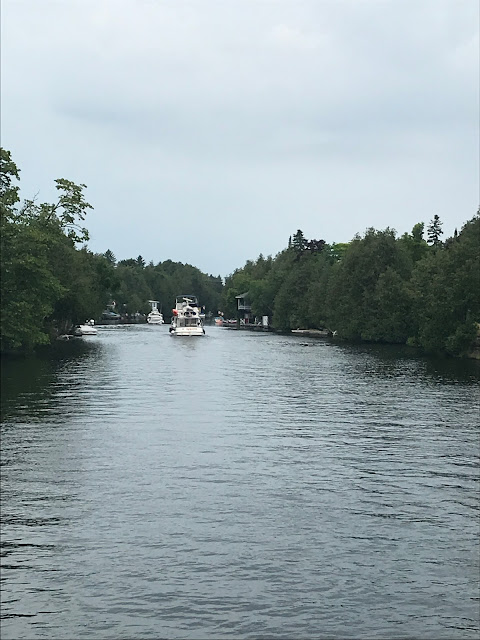 Entering the canal to Fenelon Falls 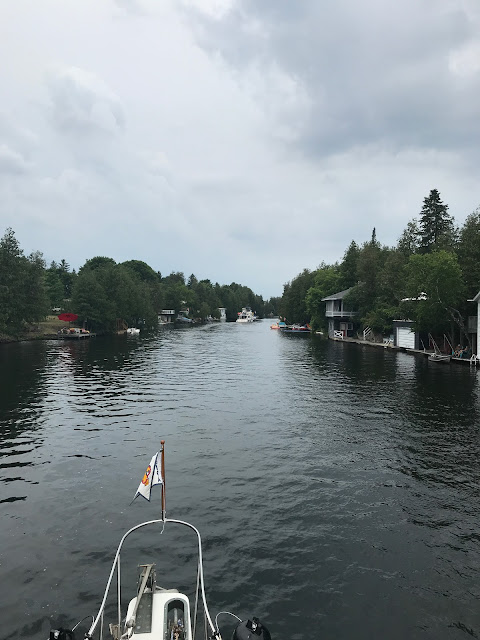 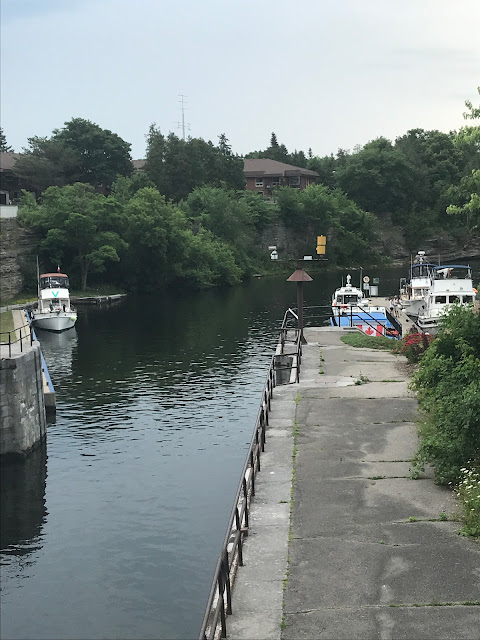 Viridian on the "Blue Line" waiting for the storm 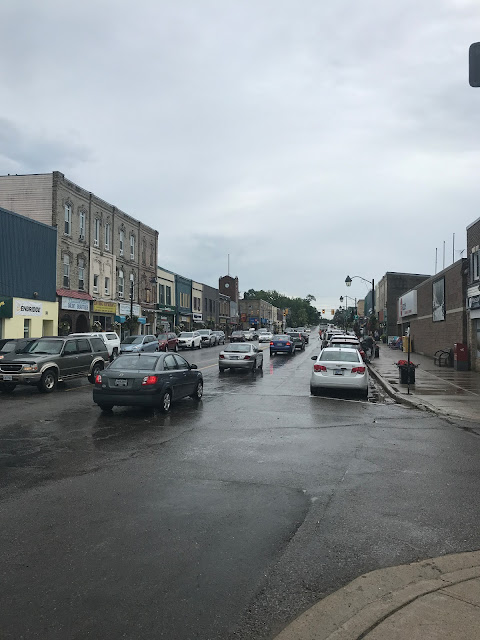 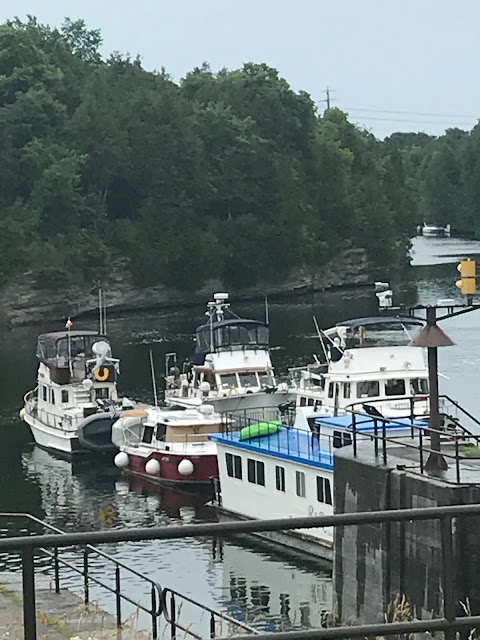 Viridian and our cruising buddies on the transient dock for the night
Posted by George Sanders at 5:33 AM