The overnight stay at the FREE Ft. Walton City Docks was pleasant and convenient.  (did I mention it was FREE)..  We were able to walk to Publix with our handy dandy blue wagon and get as much stuff as we could pull back to Viridian.  The crew of Viridian was up at 4:30 AM to start the day by crawling around in the engine room checking oil levels and coolant, looking for leaks and anything the might not have been there yesterday.  As usual, coffee was the first thing made followed by a light first breakfast.  After we get under way we like to snack on whatever we have that sounds good till we have a proper meal at lunch.

The crew of Viridian said goodbye to the crew of Moni-Jean today since our paths went separate ways.  We really enjoyed cruising with a seasoned Gold Loopers and we are a much better crew for it.  Thank you Rick and Monica for taking us under your wing and sharing your experience with us.  We hope our paths cross again soon!

Today's cruise to Panama City Marina was 68 miles through some BIG water.  The wind was still blowing a constant 15-20 mph from the NE and  made for some choppy waters on Choctawhatchee Bay, especially when we turned SE and headed into the "Grand Canyon".   Once we entered the Grand Canyon (a canal cut for the GIWW that connects Choctawhatchee Bay to West Bay) we had a few hours of protection from the wind and had lunch as the sun warmed our flybridge through the strataglass windows.  Leaving the Canyon, we entered West Bay.  By this time the wind had died down some and we had a comfortable afternoon cruise to Panama City Marina.

The views from Viridian were that of big water with tiny details along the shore that were only gray silhouettes against the rising sun in the SE.  No photos could capture the vastness of the Bay but we did manage to snap a few that might be interesting.

Once we got into the marina, we topped off the fuel tanks with diesel and got a pump out.  The  marina was full so Viridian was tied to the transient dock behind a row of Grand Banks trawlers for the night. 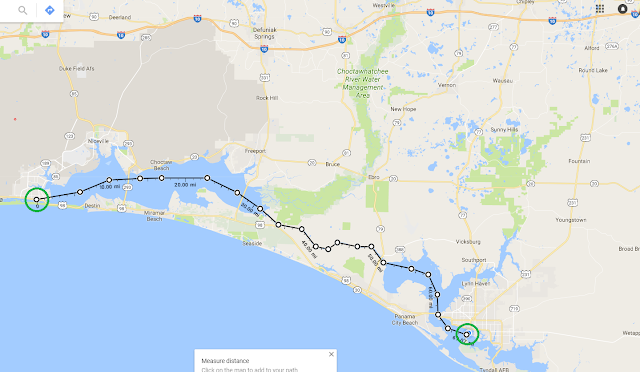 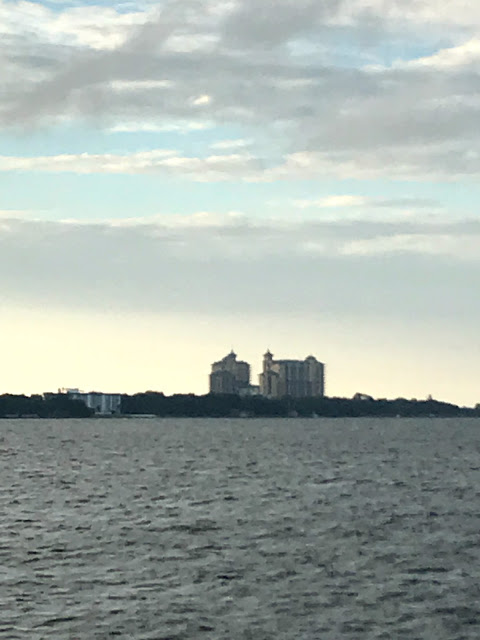 Destin, FL from the Bay side looking SE into the sun 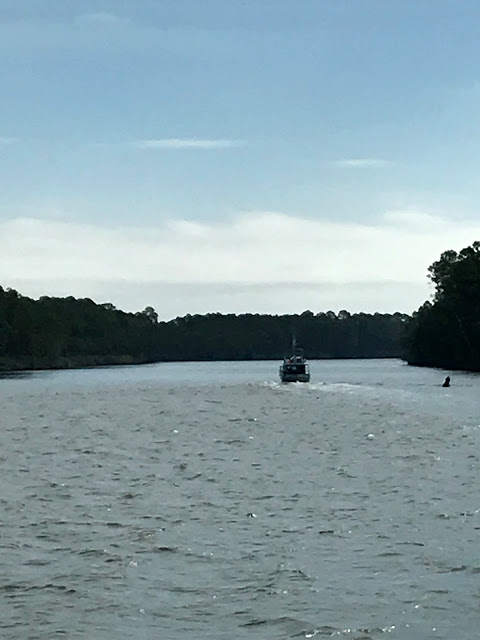 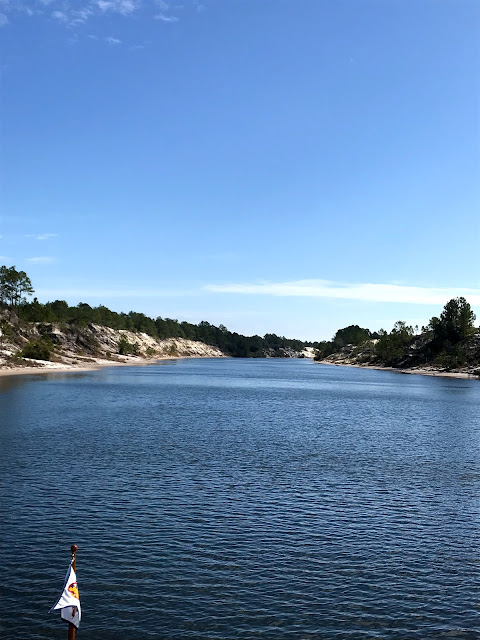 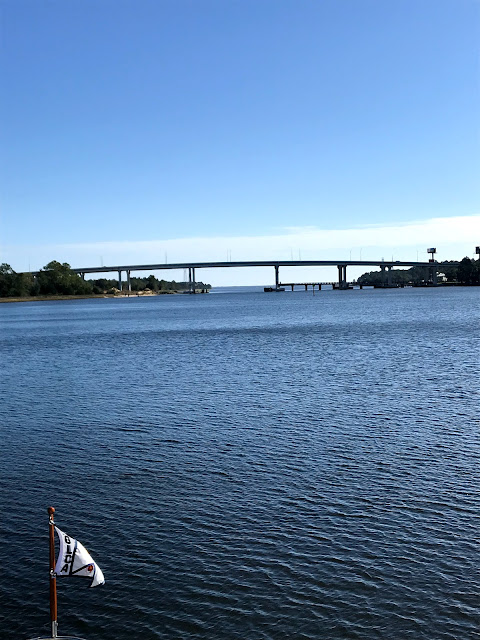 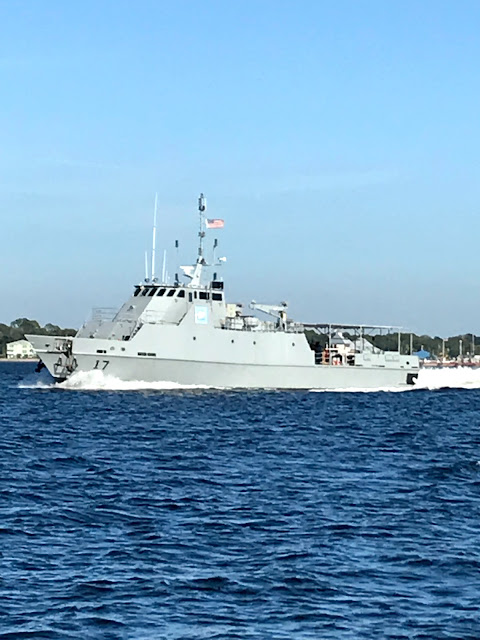 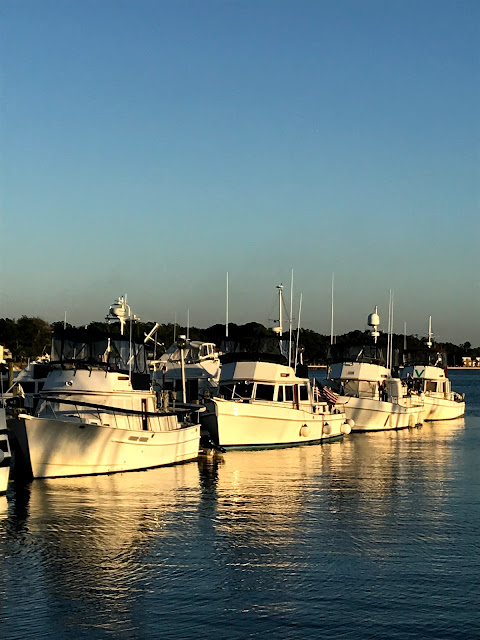 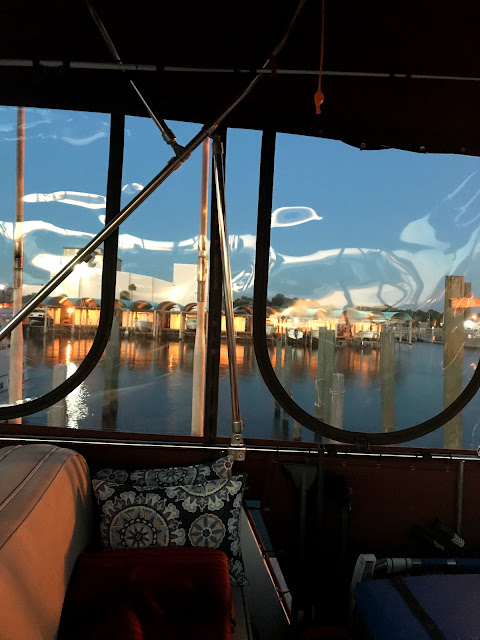 View from the flybridge office 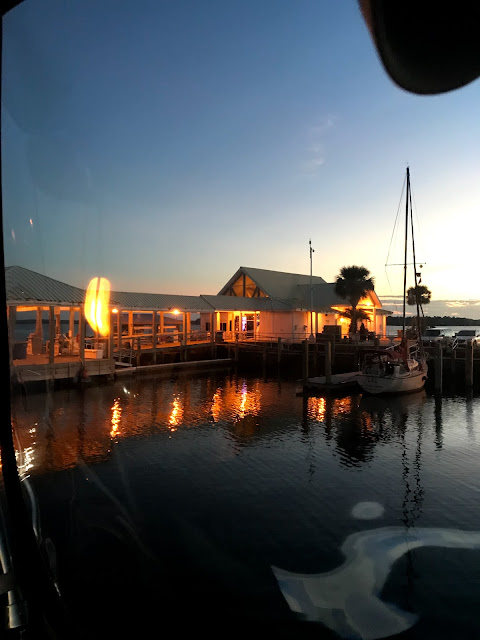 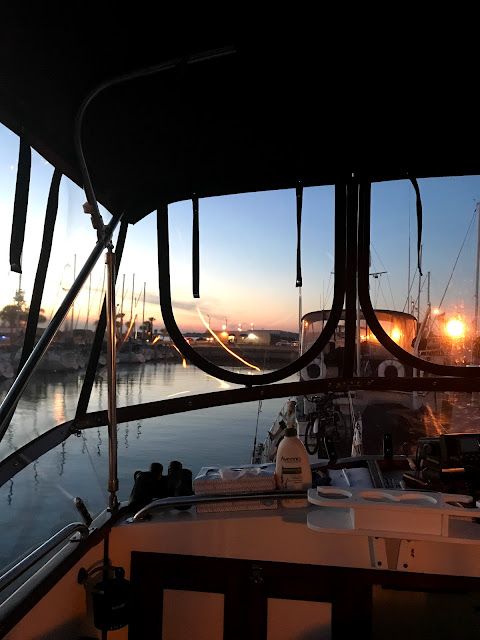 Another Day Ends  (we have been Looping exactly one month today)
Posted by George Sanders at 6:06 PM