Most people will do almost anything to avoid being bored, especially for a long period of time.  We have found that after making two Gulf crossings in Viridian that we will take boring over excitement anytime.  The 21 hour passage from Carrabelle, FL to Tarpon Springs, FL was wonderfully boring.  I mean that it could not have been better, well maybe if we had an autopilot doing the steering we wouldn't have looked so zombie like after we docked at Tarpon Springs.  People were moving to the other side of  the sidewalk as we searched for our first taste of the Greek dessert, Baklava after docking.  More on that later.   A weather window opened and closed ahead of the cold front pushing Southeast.  This "calm before the storm" provided the perfect conditions for a comfortable Gulf crossing for the 10 or so Loopers heading South.  The plan was to leave Carrabelle at 2 PM and pass the "R2" RED buoy in  East Pass at 3 PM.  This all happened like clockwork and at 3 PM we found ourselves headed on a bearing of 137 deg SW  with 6 companion boats to the "R4" RED channel marker buoy just North of where the ICW picks up in the Tampa area.  The companion boats were: Golden, Observer, Dixie, Thistle, Manatee and Chemistry.  Golden took the lead and we configured ourselves in a line keeping a quarter mile separation and a speed of 8.5ish mph/gps.  All boats were equipped with radar, some had AIS send and receive or receive only and these devices were used to maintain safe separation at night.  Every hour on the hour, Golden would announce, with his great radio voice, "Hello Tarpon bound Loopers, it is 2 AM and this is our hourly check-in.  This time we will start with Dixie. How are things onboard Dixie?" and the captain of Golden, or his wife, would work down the list until all had reported back.  This parade of cruisers stayed in formation until we got to "R4", then it was every man for himself.  Most of us were headed to Turtle Cove Marina, others chose different locations. 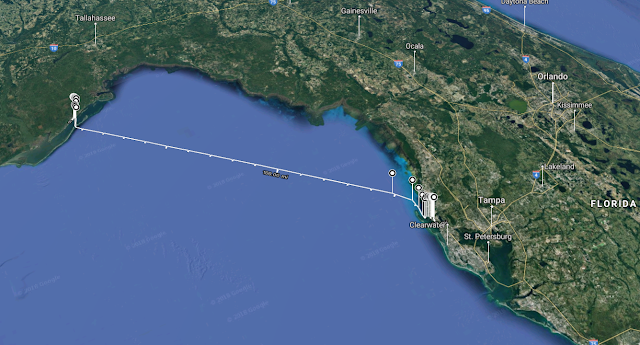 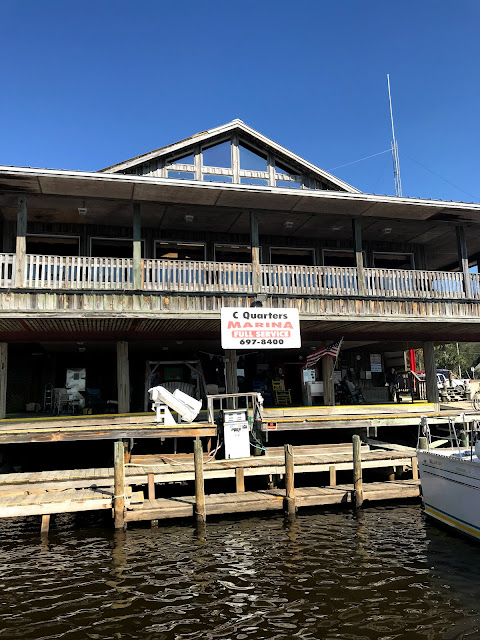 The crew of Viridian stashed  everything we thought we would want on the flybridge before departing Carrabelle.  Mostly junk food, left over coffee, water and blankets.  The period from passing "R2" to sunset was magical.  The seas were as flat as they can get in the Gulf, not a cloud in the sky as we slowly formed our line of navigation (offset from the direct path between "R2" & "R4" about 1/4 mile to the East).  Radio chatter calmed down on VHF CH-71 as everyone got settled for the long overnight passage.  The sun sank into the Gulf off our starboard side as we all waited to see if we could catch a glimpse of the elusive "Green Flash" a rare atmospheric phenomenon that happens under conditions such as ours.  Sadly, no green flash for us but that didn't diminish the splendor of a sunset on the Gulf. The colors of the sunset event highlighted our flotilla like we were being tucked under a warm blanket on a cool night.  Soon all we could see were masthead lights on the vessels ahead of us and the glow of electronics on the dash showing our position as tiny yellow dots on black backgrounds. 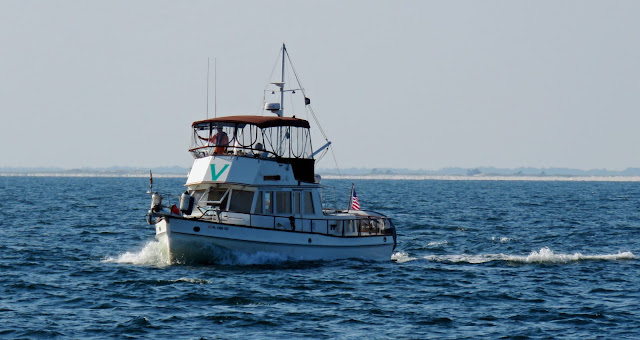 Heading towards East Past through St. George Bay

The chore of steering a straight path down our rumline was greatly simplified by the fact that we were following two boats that were going to the same place we were, "R4".   All we had to do was glance at our chartplotter every how and then to check on heading and position.  Meg and I would take turns steering on the hour, then on every 2 hours.  While one steered the other slept on a mattress in the middle of the floor on the flybridge.  When laying on our pallet, we were looking out the back of the of the open bimini.  I can't describe the night sky other than to say there seemed to be 10 times more stars than we are used to seeing at home.  The milky way arched from East to West over our boat and could be seen clear down to the horizon.  Viridian moved gently over the small rollers coming on the bow and gave the effect of being in a rocking chair.  The sound of spray from the bow slicing through the rollers kept time with the rocking motion as the low notes pounded out by the diesel engine rumbled underneath.  The red and green lights of Thistle behind us was a comforting reminder that we were not alone.  I don't remember falling asleep but it was soon my time to steer again so we swapped places like this till sunrise the next day. 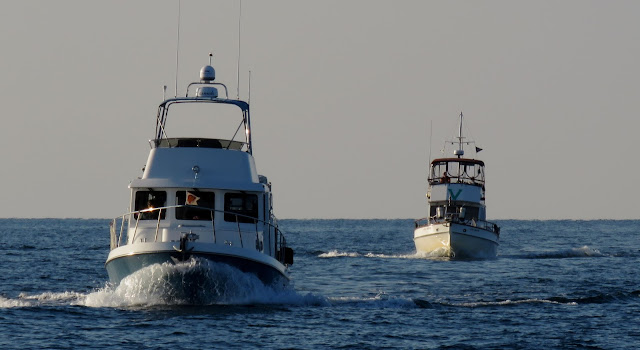 There is a good reason for hull speed boats like ours not to leave the "R2" buoy at East Pass until 3:00 PM.  When the sun comes up in the morning it is pretty much on the 137 deg heading we are navigating.  If we get to within 30 miles of the coast by sunrise then we are faced with blinding sun reflecting off the water and in the sky.  The problem with this is that there are crab pots, soccer sized balls attached to a line that is connected to a crab trap on the ocean floor, scattered like a mine field starting 30 miles offshore.  It is nearly impossible to see these things before 10 AM so we plan our arrival in this area to be after 10 AM, thus the 3 PM start time back at "R2".  We all zig-zagged our way through the crab pots and made it to "R4", down the Anclote Sound and into the Anclote river and wound our way up river to Turtle Cove Marina.  A stern first docking got us on a floating finger pier where we plugged into shore power and crashed.

So, boring is good when crossing the Gulf at night.  We now know what good looks like! 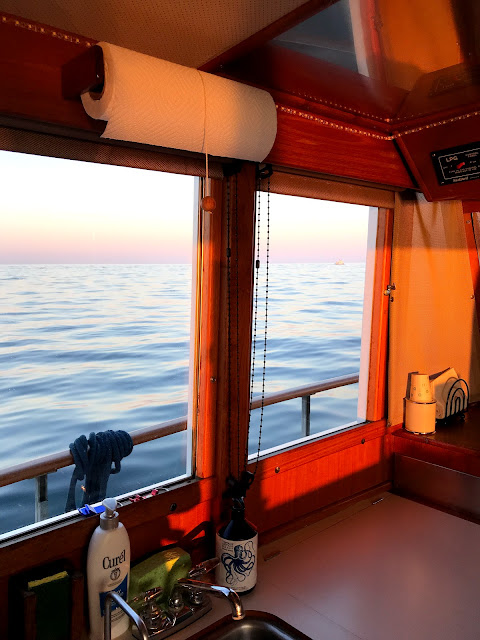 The Gulf doesn't get much smoother that this 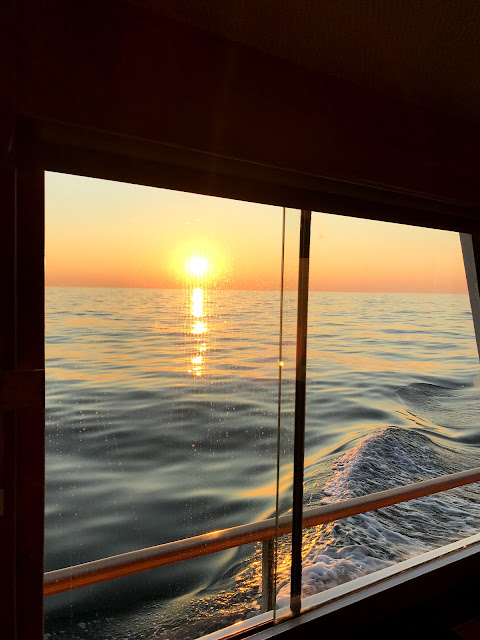 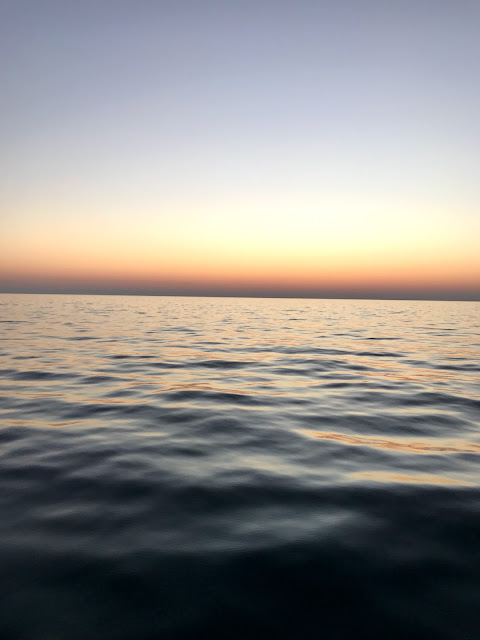