Practicing being Laid-Back Loopers in PC

Staying an extra day in Panama City will help us in our quest to become Laid-Back Loopers.  Laid-Back Loopers don't do schedules or watches, drive slow trawlers and hang out in cool places till the urge to move strikes.  It can be hard to shake the agenda filled life most of us lived by since kindergarten but we are giving it our best.

One of the things I wanted to do was fish in Florida waters.  This morning I purchased a Florida State fishing license at the marina store.  I already have a rod and reel so all I need now is to find some local who knows what I need to catch Flounder with.  Meg and I walked into Downtown PC this morning to do some exploring and found C&G Sporting Goods.  Inside was everything you could want for hunting and fishing.  The owner was extremely helpful in getting me fixed up to catch Flounder.  After purchasing our tackle we looked for a coffee shop to stop by and found this shop called Bagel Maker.  Inside were fresh made bagels of all kinds with a huge selection of cream cheese to choose from.  We picked out what sounded good and were not disappointed.  Back at the marina I rigged up my rod and reel and started fishing around the piers and walls close to our boat.  I got a bite and started reeling it in only to pull up a softball sized Blowfish.  These things are one of the most poisonous things in the ocean.  One fish has enough toxin to kill 30 adults, more powerful than cyanide.  I didn't have to touch the thing since it came off the hook as I held it just above the water so Meg could see it.  I didn't get that Flounder today but tomorrow is a new day.

After lunch we took Viridian 8 miles south of the marina to Shell Island.  After cruising about a mile South of the marina, our radio was lit up by a Navy vessel off our port bow saying, "trawler moving South leaving PC marina this is a Navy vessel approaching on your port bow."  Well, that sure sounded like us so I replied by saying, "This is the trawler Viridian, with a big "V" on the brow, you mean us?"  He said yes and that we were to stop and get back into the channel that leads out into the Gulf if we were headed off shore.  I told him that we were going to Shell Island and that was not toward the Gulf inlet.  He said we could either circle way around to the West and go behind the other Navy vessel or take a sharp turn to port and skirt the shore on the East side of the bay.  We chose the latter since it was the most direct route to our destination.  I asked him what was going on and he said that the Navy was conducting some operations in the Bay and we needed to stay clear.  So we changed our course and took the turn to port and went down the east coast of the Bay toward Shell Island.  As we proceeded we kept watching the Navy boats and trying to figure out what was happening.  Suddenly, we saw a periscope come up out of the water in the middle of the area they were guarding.  They must have had a small sub in there and were making sure no one ran over it.
Shell Island is an approximately 7-mile long undeveloped barrier island running east to west between the Gulf of Mexico and the St. Andrew Bay. Here you'll find sand dunes, coastal scrub forest, pine hammocks, and an inland lake provide the perfect home for deer, nesting shorebirds, and all manner of coastal creatures, including ghost crabs, Choctawhatchee Beach Mice, piping plovers, snowy plovers, and loggerhead and green sea turtles.  We walked up and down the beach picking up some shells and other interesting things.  A picnic lunch on the beach and a little surf fishing in the viridian waters was a nice change of  events.

Getting back into Jazzy to go back to Viridian, we noticed a couple in a pontoon boat  having trouble getting away from the beach.  The North winds were still blowing 15-20 mph again today and their anchor dragged while they were on the beach.  The boat was blown up against the beach in abut 10 inches of water and sitting on the sand.  We drove Jazzy around the pier and over to the beached pontoon boat to see if we could help get them off  the windward shore.  A lot of pushing and pulling finally got the boat floating again and with the help of its outboard motor tilted so the prop would not hit bottom, we managed to it backing away from the shore.  This young couple had rented this boat and were there exploring like we were.  So, back to Viridian we went and set sail for PC marina as the sun set in the Gulf to get ready for another day sailing South toward the Florida Keys. 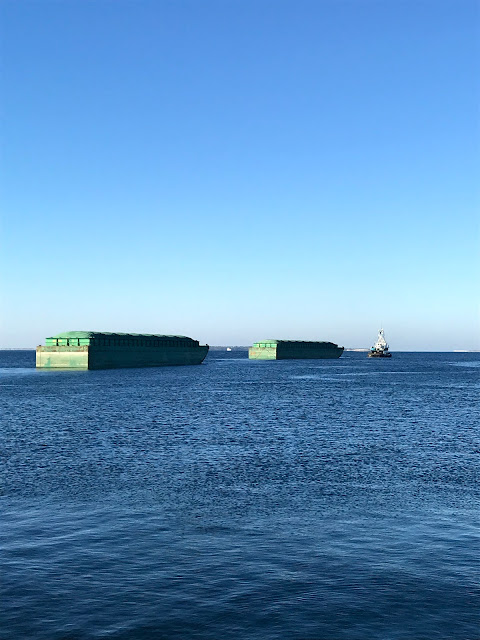 Tug pulling empty barges tied together with a single rope 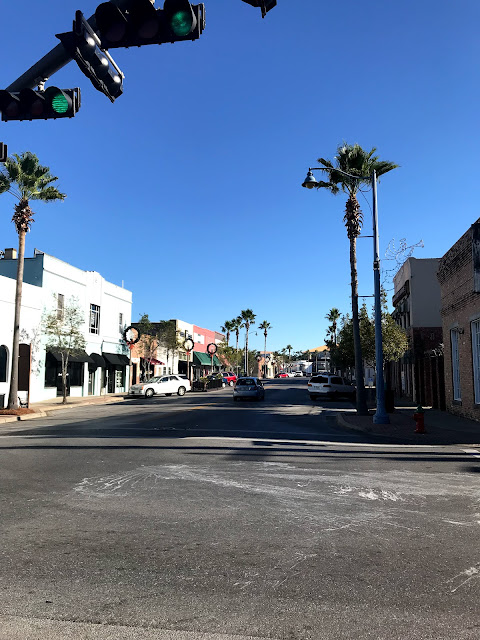 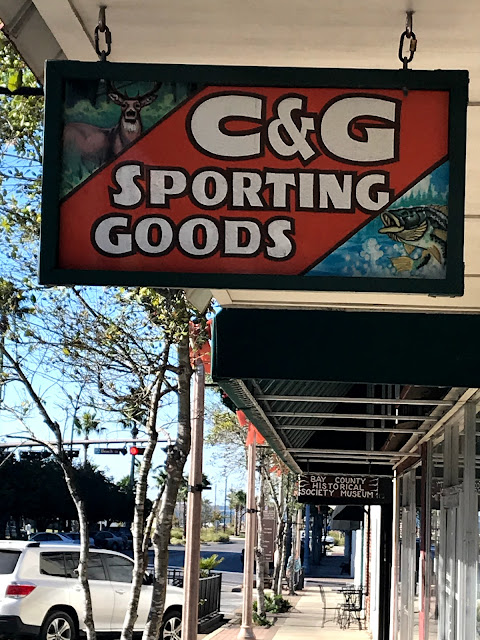 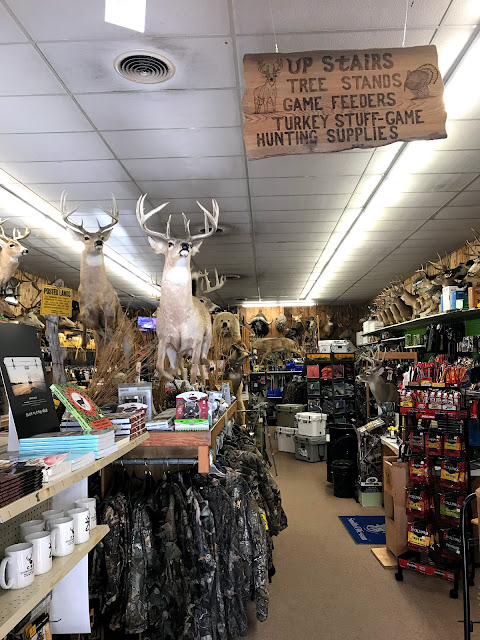 Yep, this is the place 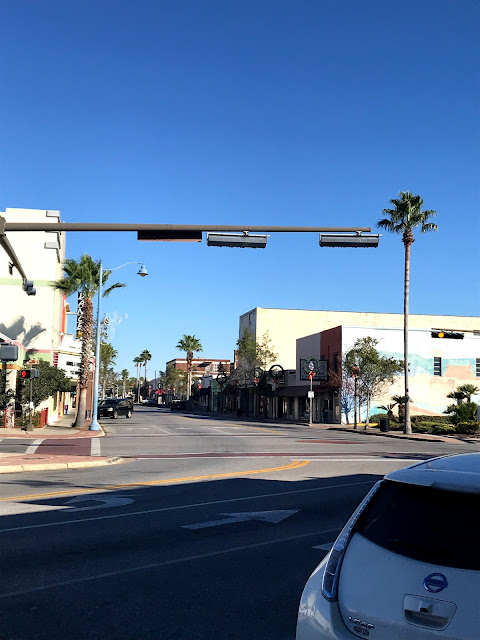 More of Downtown PC as we walk North 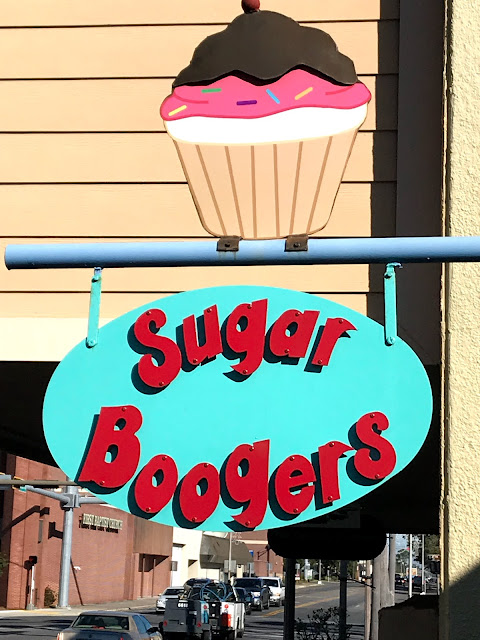 Didn't stop here but interesting name for an eatery 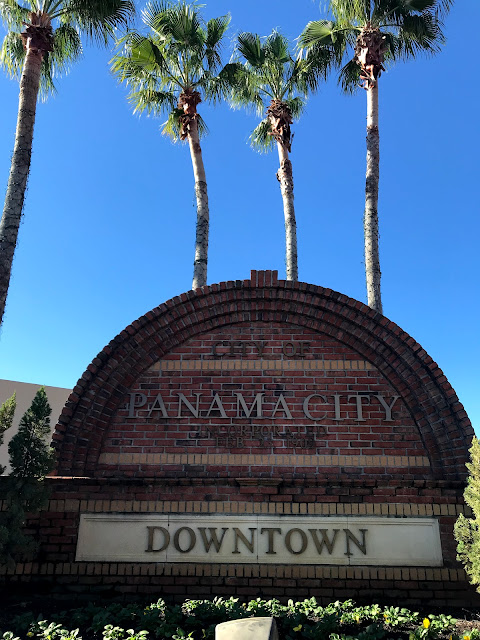 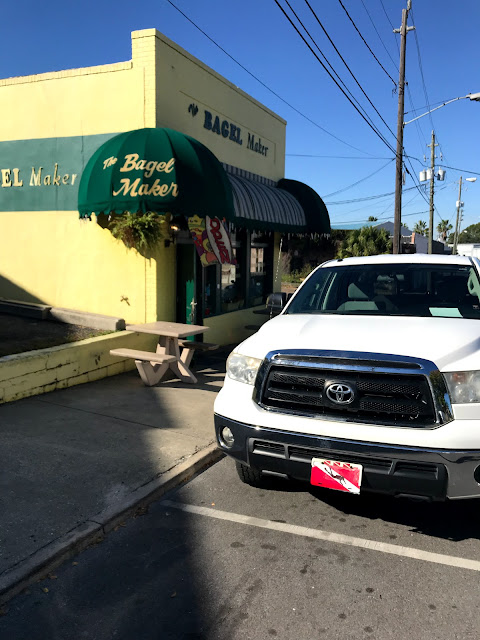 This place has bagels 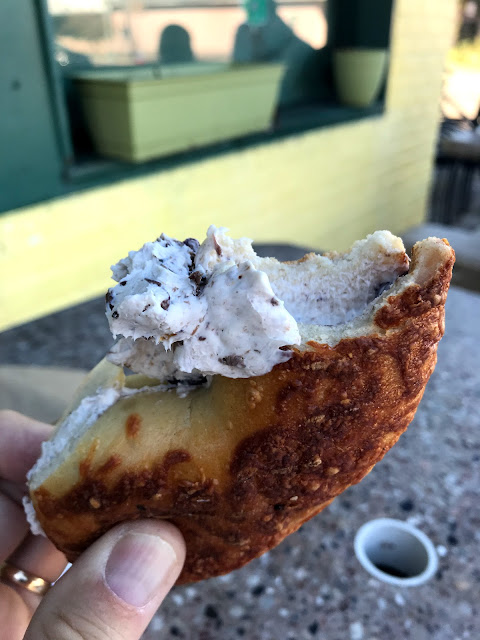 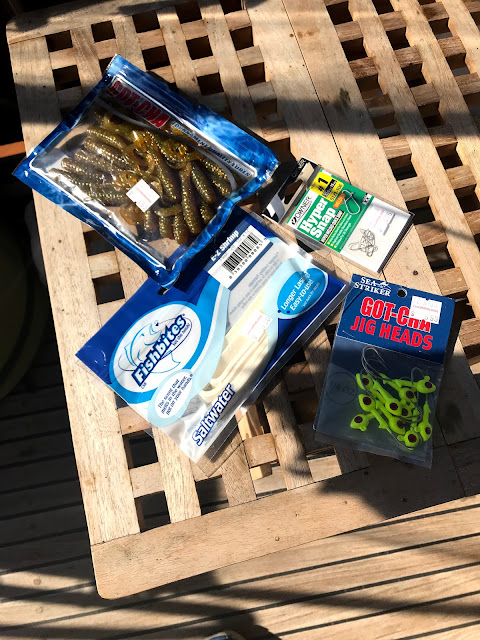 Guaranteed to catch Flounder, We shall see 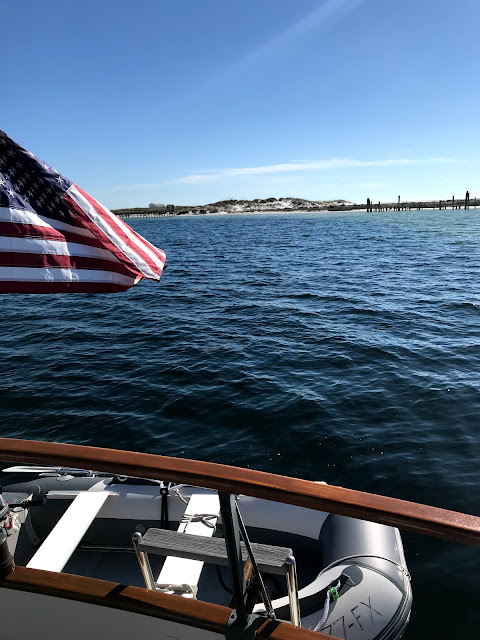 Dinghy Jazzy ready to take us to Shell Island 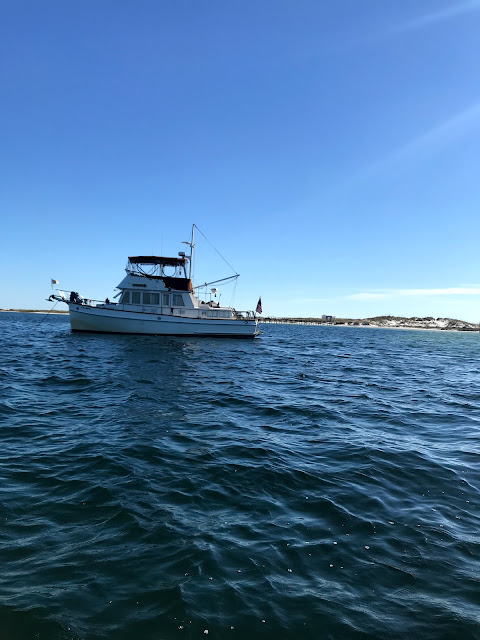 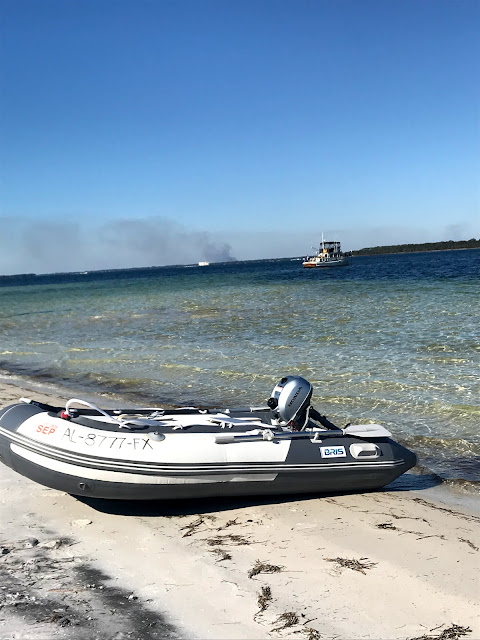 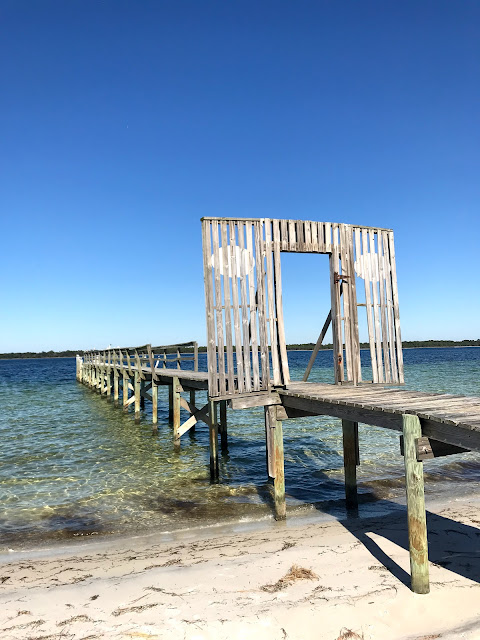 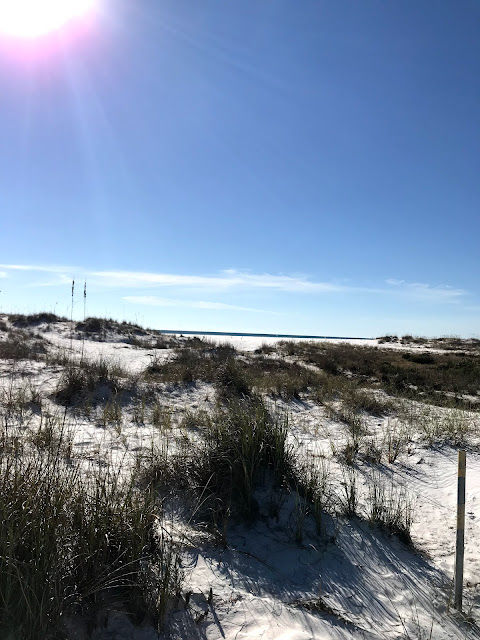 We can see the Gulf from here 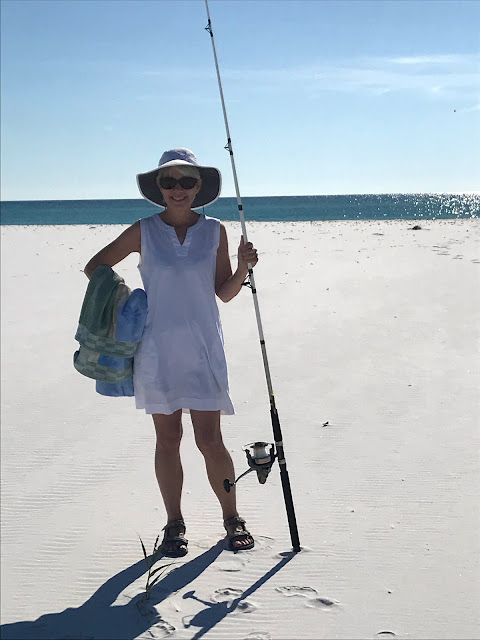 First time we have had an entire island to ourselves 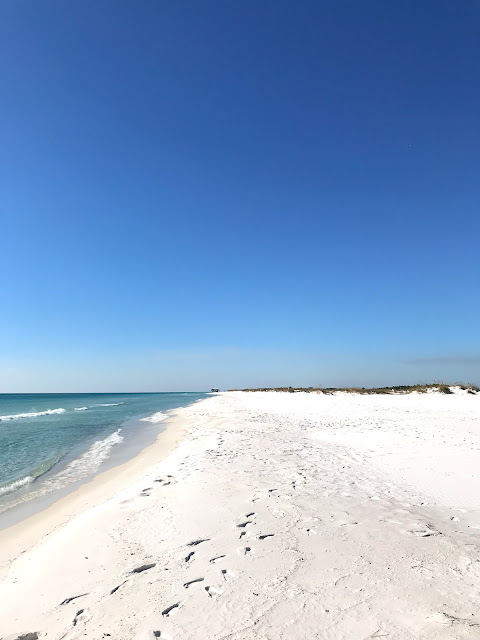 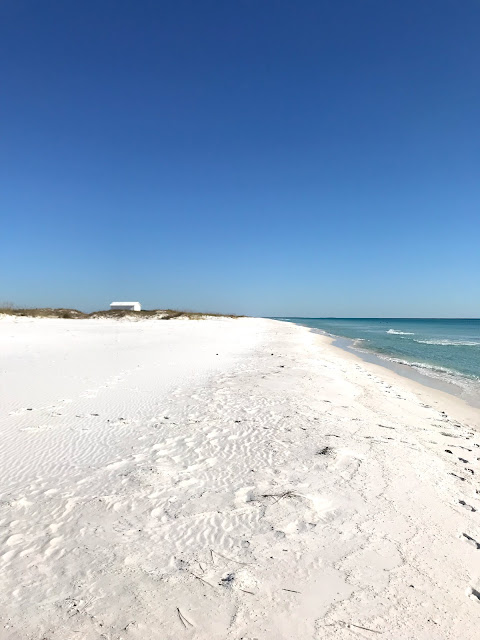 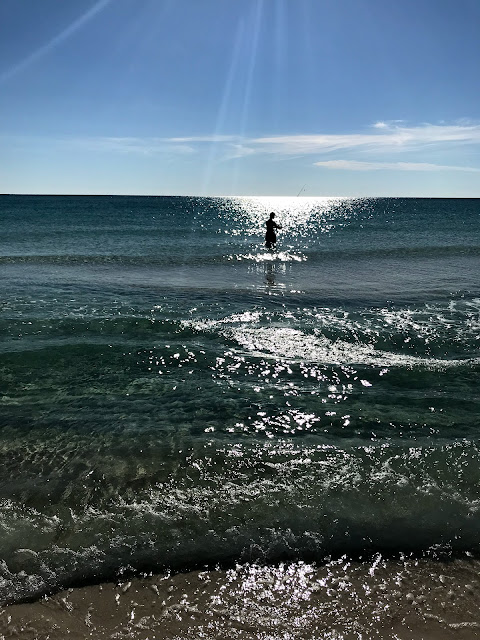 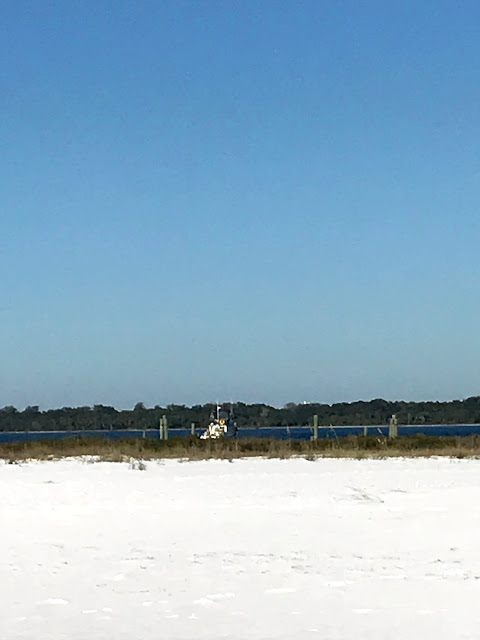 Looking back at Viridian 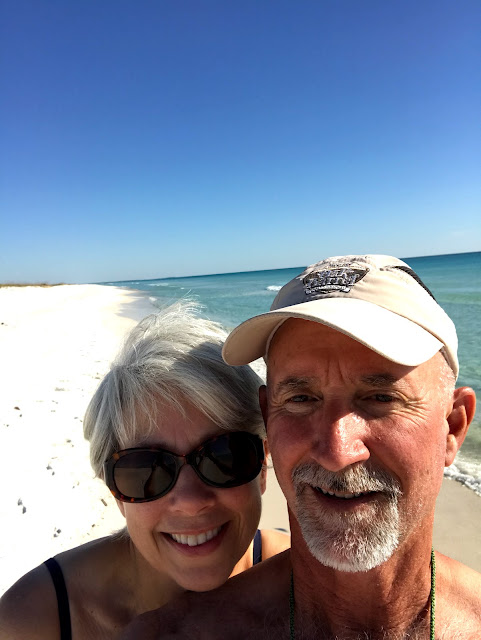 Great place to be in November 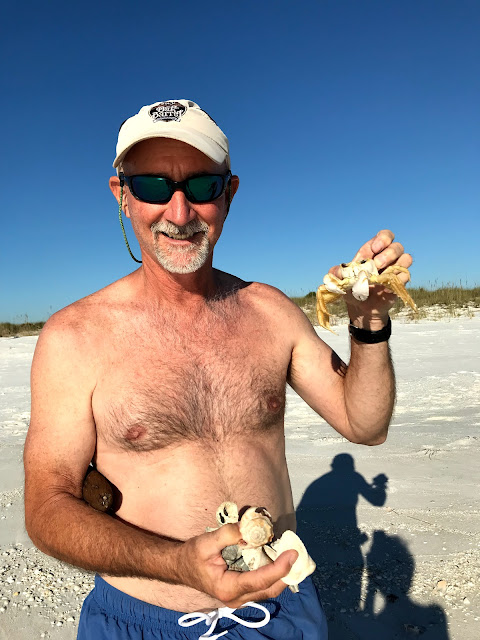 Sunset at the Marina
Posted by George Sanders at 6:59 PM